“It’s NEVER like this” said Andrew leaning forward from the tiller of his boat in shimmering heat on the flat-calm, turquoise sea of the Caolas Phabaigh (Straits of Pabay). We are on our way to the island of Pabaigh Mor on the west coast of Lewis with new volunteers to visit coastal archaeological sites that local people have been keeping an eye on for years. 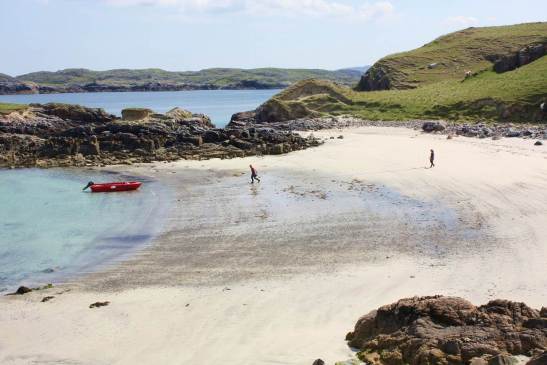 The first is immediately visible as layers of shell, peat ash and clusters of boulders in the face of a sand dune at the beach where we landed. Closer inspection reveals numerous fragments of coarse pottery and pieces of animal bone. 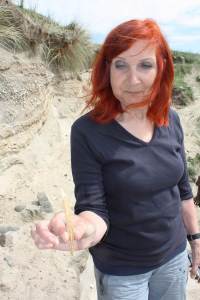 Jill with her find

Sharp-eyed SCHARP volunteer Jill spots a worked bone point in the sand below the building remains. It looks like an awl used to pierce holes in leather. Jill photographs the artefact before she picks it up and takes a grid reference so the museum knows exactly where it was found. The last person who touched the awl probably lived in the building now eroding out of the dunes over 2000 years ago. We can’t be more exact than this because not enough research on this settlement mound has been done yet. An eroding burial excavated nearby was radiocarbon dated to the early Bronze Age, around 3000BC, but this may pre-date the prehistoric house in the dune. 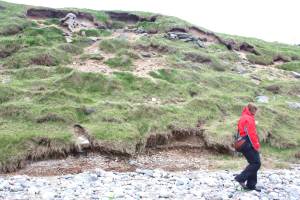 Settlement mounds are found throughout the Western and Northern Isles. They are like the ‘tell’ sites of the Middle East, where generations of people have lived and re-built on the same spot creating mounds of archaeology that can span hundreds or even thousands of years. An eroding settlement mound at Gabhsann (Galson) on the northwest coast of Lewis contains evidence of at least a thousand years of occupation from the Iron Age to the Norse period. Rising relative sea-level over the last 10,000 years in the Western and Northern Isles of Scotland means that many of these sites are now located right at the coast edge – and exposed to the waves.
Gabhsann is just one of the eroding sites recorded on our Sites at Risk map, and one of the great many numbers of archaeological sites you can see around the coast of Lewis. Some are on cliffs or far enough inland to be quite safe from the sea, but others like Gabhsann and on Pabaigh Mor are highly vulnerable to coastal processes. 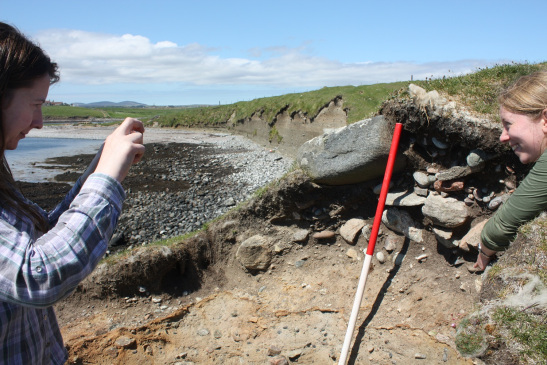 New evidence and archaeological material is regularly revealed, which is why local monitoring by people who know these sites well is so crucial.

The next generation are already starting to be at the heart of deciding how some of these precious sites are interpreted and presented, thanks to Donald MacSween who amongst his many jobs and interests is the Include-Us support worker in Lewis. Here’s Donald to tell you about the two brilliant days we had with 6 young people who were tasked with coming up with an enterprising idea using coastal heritage in Lewis as their inspiration.

We had two really interesting days in Comunn Eachdraidh Nis, with a group of youngsters from Ness and the West Side. Some of them had just left school, while others were given permission to attend the event, as the school saw the benefit of being involved in such a project. We first of all researched the different types of cultural tourism available throughout the Western Isles, while also looking at phone applications which are used for tourism purposes throughout the UK. We followed this with an afternoon field trip, giving everyone the opportunity to stretch their legs, visit some archaeological sites and also hear some of the stories behind them. 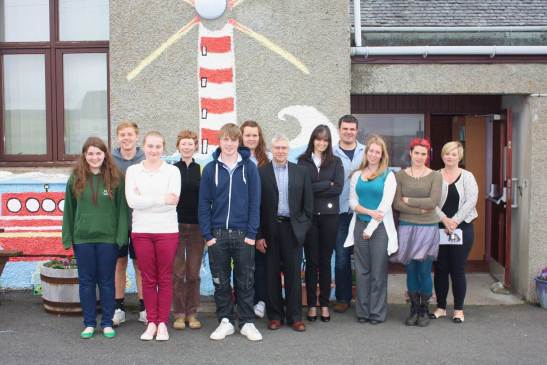 The second day was spent in the Comunn Eachdraidh, with the youngsters splitting themselves into two teams, and going head to head in front of our panel of ‘Dragons’. They spent the morning researching and preparing their pitches for the Dragons Den panel that was awaiting them in the afternoon. Both teams chose to go down the phone app route, but with slightly different proposals.

Both were excellent ideas and, although one of the teams had to win, they will both work together to develop the app over the summer months. A really good exercise which should lead to a fantastic tool for North Lewis. 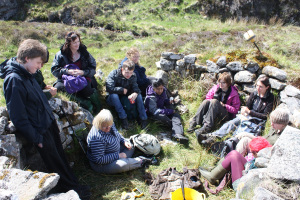 In our (too) short 2 weeks on Lewis, volunteers and new friends shared with us their rich knowledge of local coastal heritage sites and the stories that are associated with so many of them and the places that we explored.

Many people and organisations made our visit hugely enjoyable – so thank you Comunn Eachdraidh Nis and Comunn Eachdraidh Uig for the great facilities, food and friendliness; thank you Donald Macsween for all your support and behind the scenes organisation and planning; thank you Include-Us gang for your great contribution and great company; thank you Andrew Mcvean for taking us in your boat on a magical visit to Pabaigh Mor; thank you Dragons – Lisa Maclean from Urras Oighreachd Ghabhsainn, and Mark Elliot and Deborah Anderson from the Museum and Heritage service of the Comhairle nan Eilean Siar; thank you Kevin Murphy; thank you Mary Macleod UHI Lews Castle College; thank you UHI students we really enjoyed your company once again; thank you Jann Skelly for everything; thank you Jim Crawford for sharing lots of really useful information you have researched.; and THANK YOU ALL of our new ShoreUPDATE survey volunteers in Lewis – we look forward to working with you. 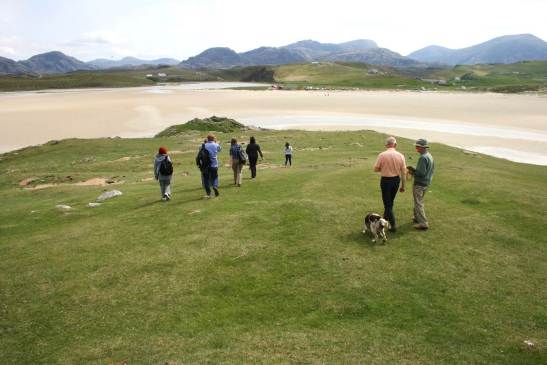