Picts and the Wemyss Caves

The nation of the Picts, the Roman-named ‘painted ones’, or possibly the Latin form of a forgotten native name, emerged from the tribal societies of late Iron Age Scotland through resistance to Roman control. Between the 6th and 9th centuries AD, their territories stretched along the East Coast from the Firth of Forth to Shetland. In the 9th century, they united with the Gaelic Scots in the face of mutual annihilation by relentless Norse attacks, and from this period onwards they all but disappear from view.

The enigma that surrounds the Picts is largely because they left no written language or history, in a time when written history had become the norm in this part of the world. So all we know of them is the impression they made upon other writers. 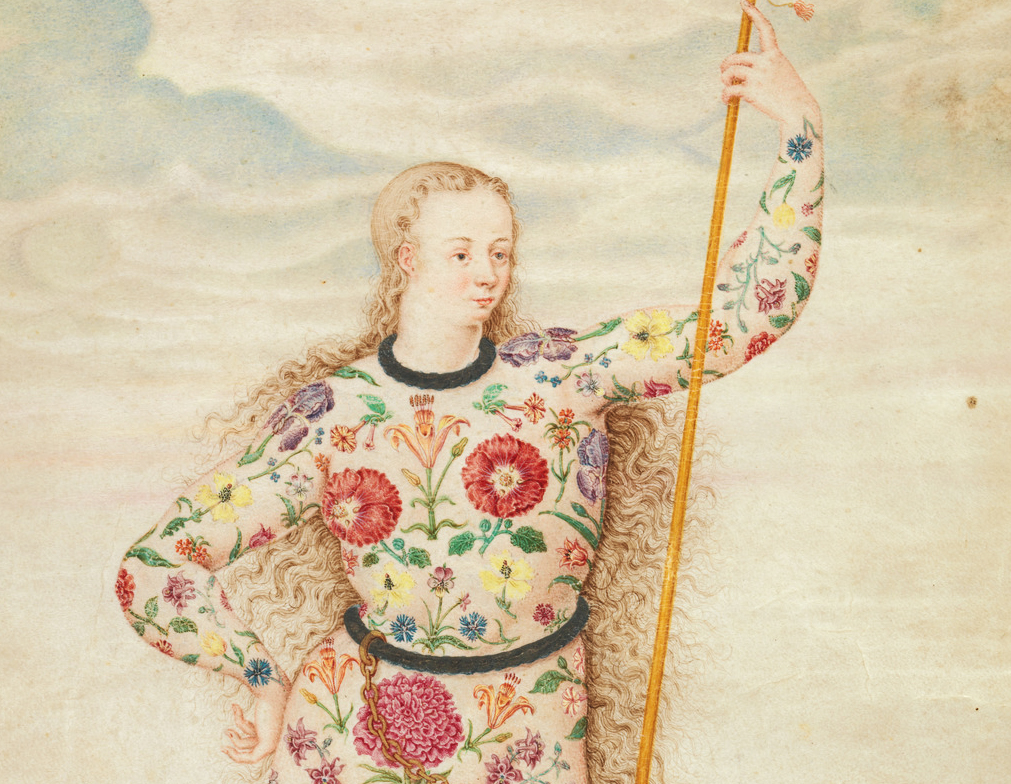 This image ‘A Young Daughter of the Picts’, painted in 1590 attributed to Jacques Le Moyne de Morgues has been very influential to artistic representations and our perceptions of the Picts. © Public domain, via Wikimedia Commons 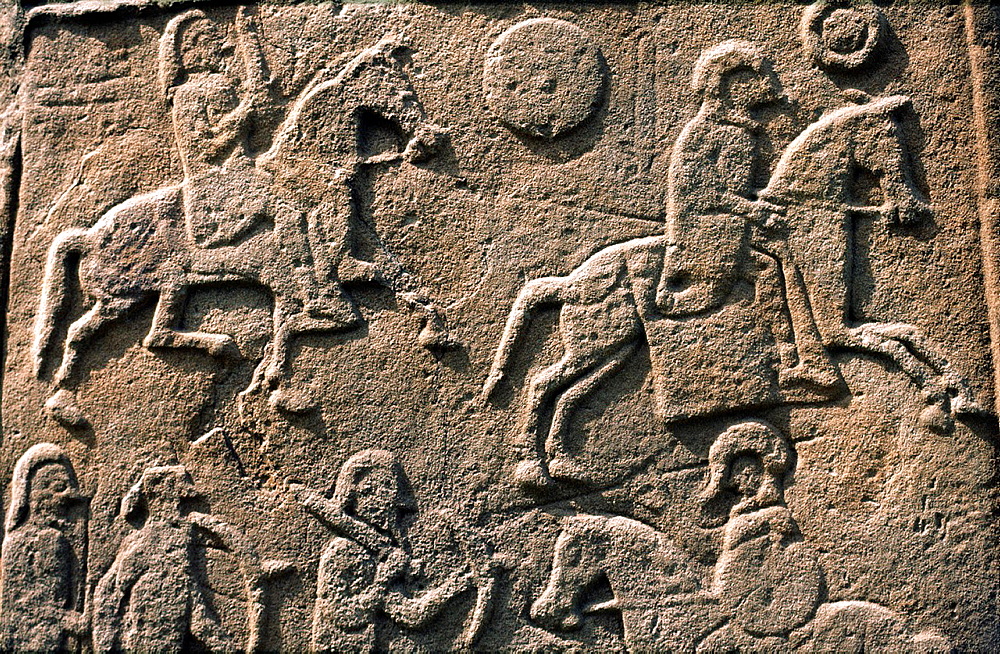 But this is typically how the Picts represented themselves on their symbol stones – as warriors on horseback. This battle scene is from Aberlemno.

Archaeology tells us that the Picts were mostly farmers who lived in villages, as well as hunters, seafarers, craftsmen and warriors, who sometimes retreated to fortified places. Their royal family and elites were well-connected with Europe and traded luxury goods such as precious metalwork, glass and ceramics. 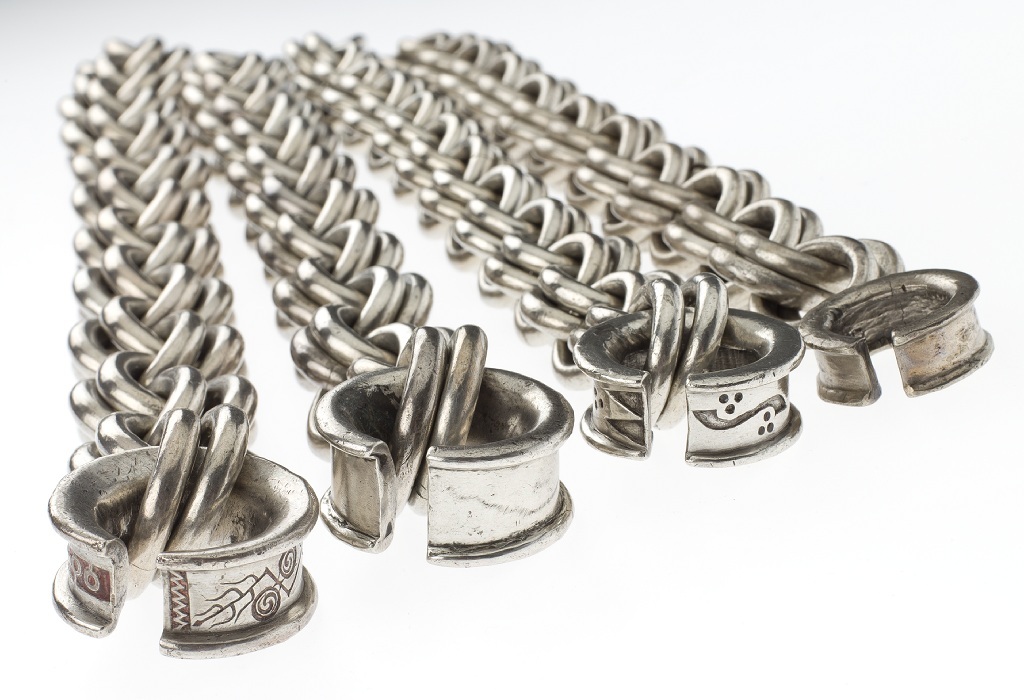 Pictish silver chains, on display in the Early People and Kingdom of the Scots galleries in the National Museum of Scotland ©NMS

The Picts are best known, however, for their monumental symbol stones, around 250 of which have been discovered. The abstract motifs, fantastical beasts and animals inscribed upon the stones share an incredible conformity of design which means we instantly recognise them as Pictish. The symbols must have been full of meaning for the Picts – lost to us today. They are also rarely found on portable objects of stone and silver, and even more rarely inscribed into cave walls and rock outcrops. 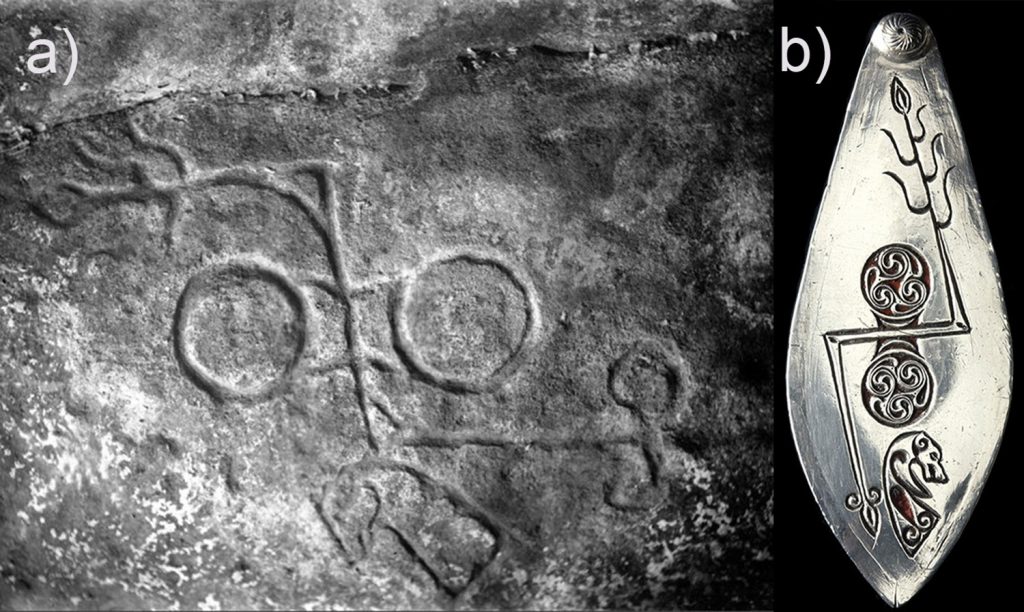 Two almost identical symbols, a) carved into the now collapsed West Doo Cave, b) on a silver plaque from the Norrie’s Law hoard near Largo just up the road from East Wemyss. Recent research by the National Museums of Scotland has identified the silver plaque as a probable component of a late Roman period helmet common in 6th century Europe.

Wemyss, from the Gaelic word for cave, uaimh, is a coastal area of Fife, around 30 miles north of Edinburgh in Scotland.

A panoramic view of the Wemyss Caves coastline.

On a visit to East Wemyss in 1865, the medical doctor and antiquarian James Young Simpson recognised and first documented pictograms incised upon the cave walls as Pictish in origin. 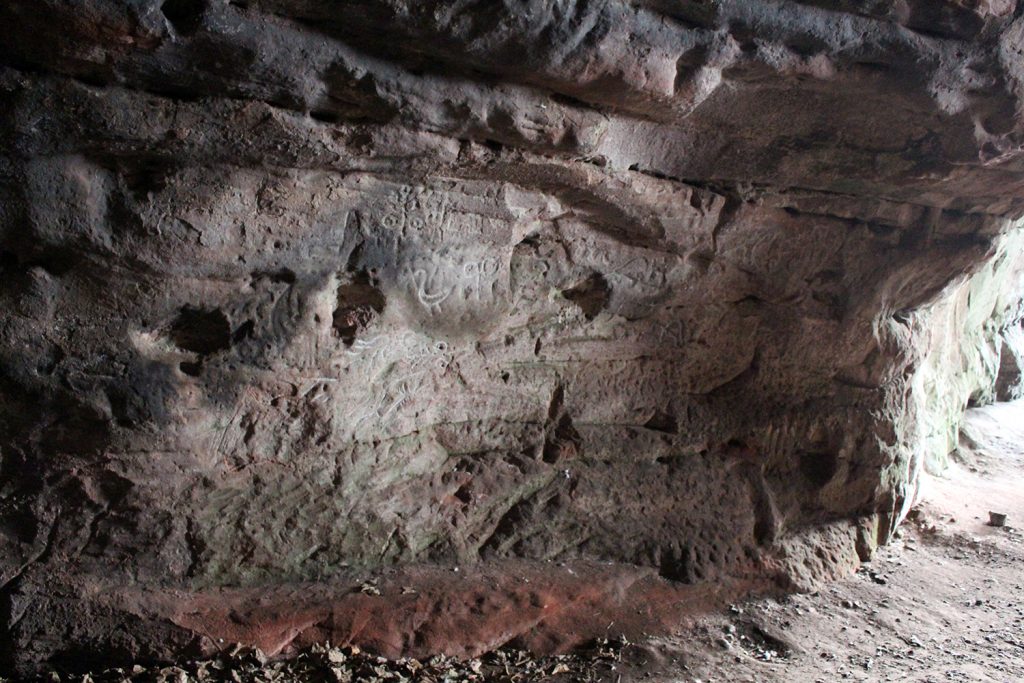 The panel of carvings in the Court Cave. How many double discs can you see? There are 4 examples but you might have to go to the Wemyss Caves 4D website to find them.

To put the rarity of the Wemyss Caves in context, they contain 49 of only 60 examples of Pictish symbols documented in caves and account for five of the eight known caves in Scotland that have recorded Pictish symbols in them.

The Wemyss Caves uniquely contain other important historic carvings on their walls. A figure of a six-oared boat survives on the north wall of Jonathan’s Cave. 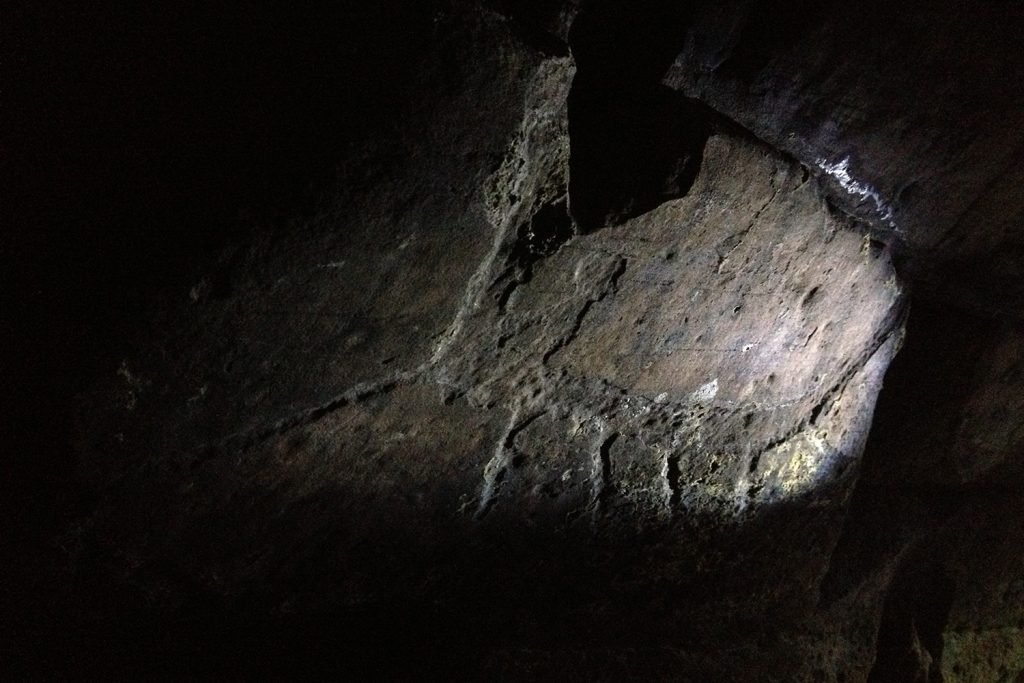 Jonathan’s Cave boat – probably the earliest depiction of a boat in Scotland.

In the passageway adjacent to the Court Cave, a figure brandishing a club next to an abstract shape is locally referred to as Thor and his hammer with a goat. 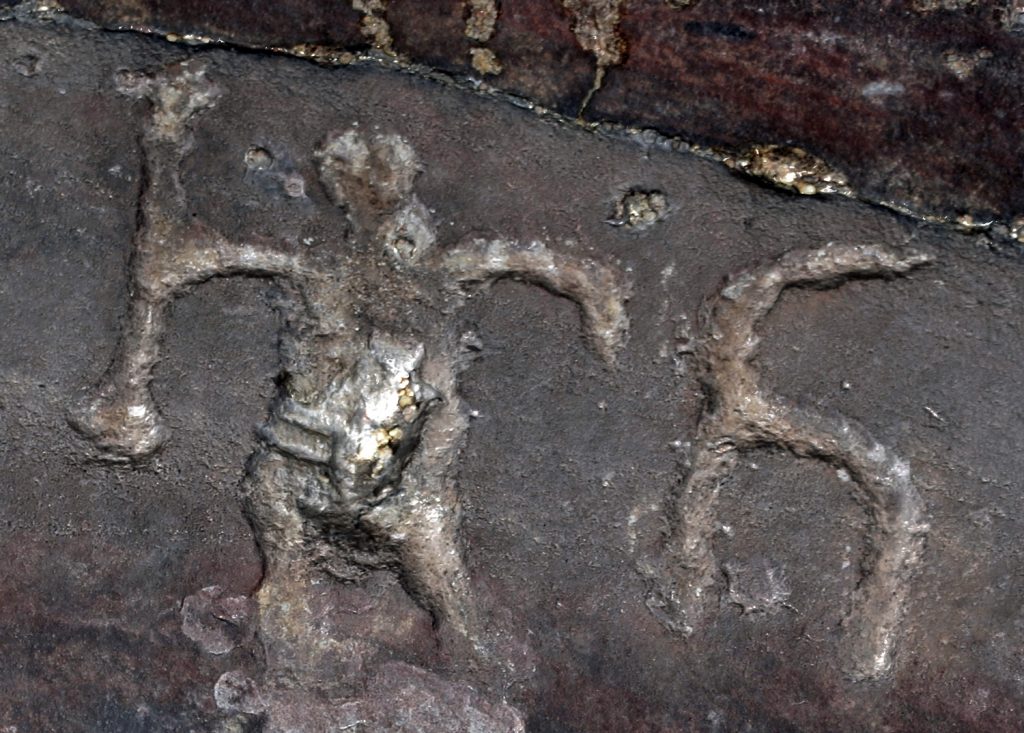 A figure brandishing a weapon accompanied by a possible animal symbol. This carving is not a classic Pictish symbol but may have been carved in the Pictish period, or even earlier.

On the opposite wall of the passage, nine midget cup marks appear to form a cross shape. Crosses, believed to date from the earliest use of the caves by Christian missionaries from Iona can be seen in many Fife caves including at Wemyss. 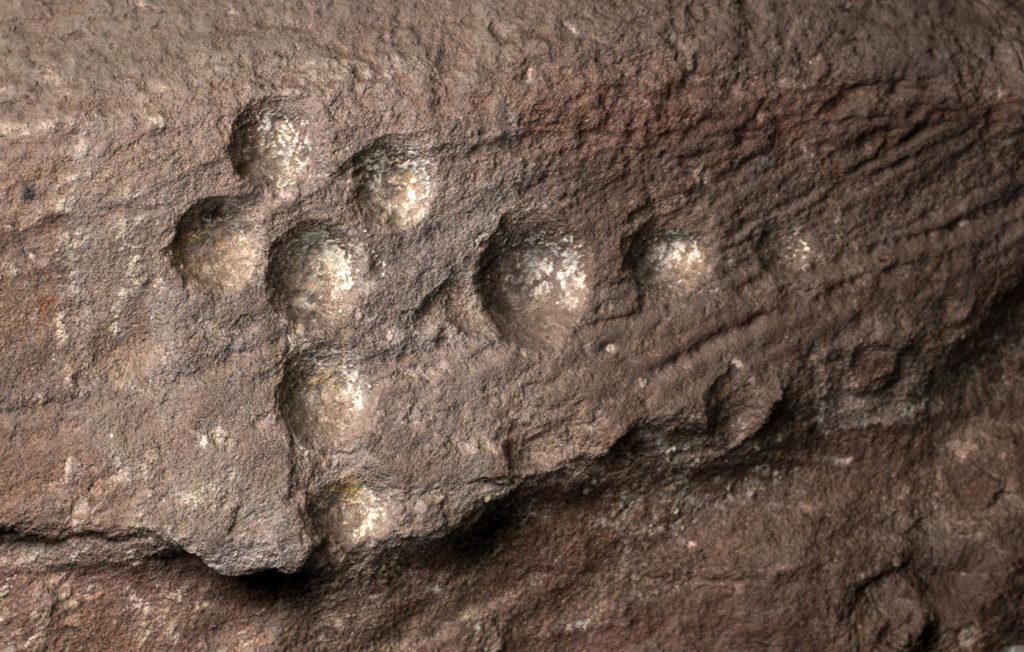 These midget cup marks appear to form a cross shape.

What meaning the symbols imbued to the Wemyss Caves, we don’t know. However, their presence and sheer numbers implies this must have been a special or holy place. 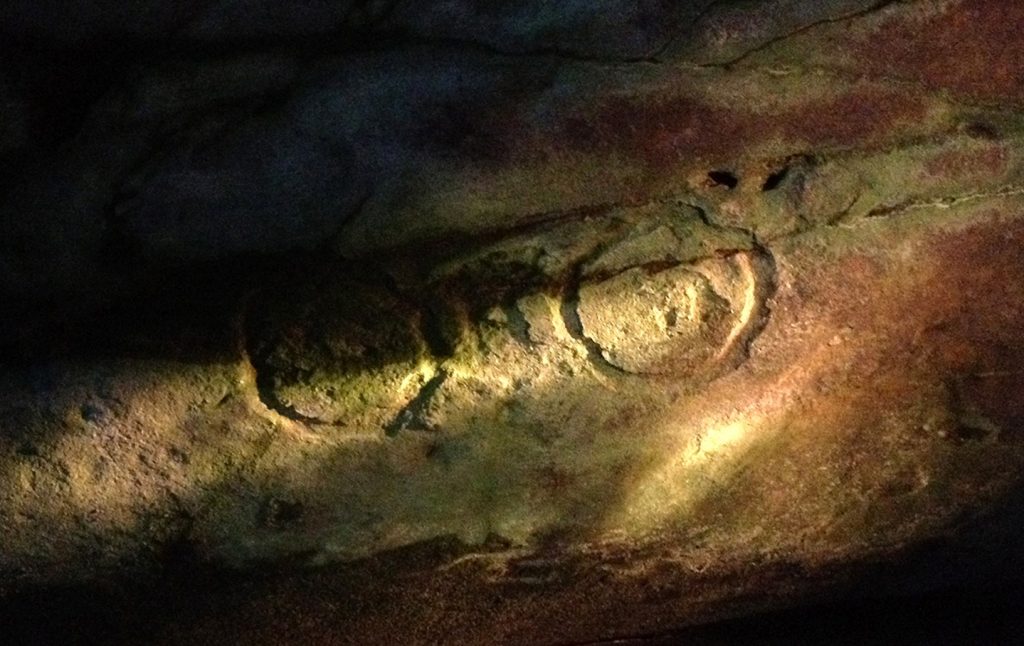 Of the 49 symbols documented in the 19th century, 26 survive today. The others have been destroyed as a result of cave collapse and vandalism.

Romilly Allen’s rubbing of a Pictish beast and swan carving in Jonathan’s Cave made in 1890. These were sadly destroyed when a car was set on fire inside the cave in 1986. © The British Library Board (37573)

The surviving carvings continue to be threatened by structural decay and coastal erosion as well as inadvertent and deliberate harm. 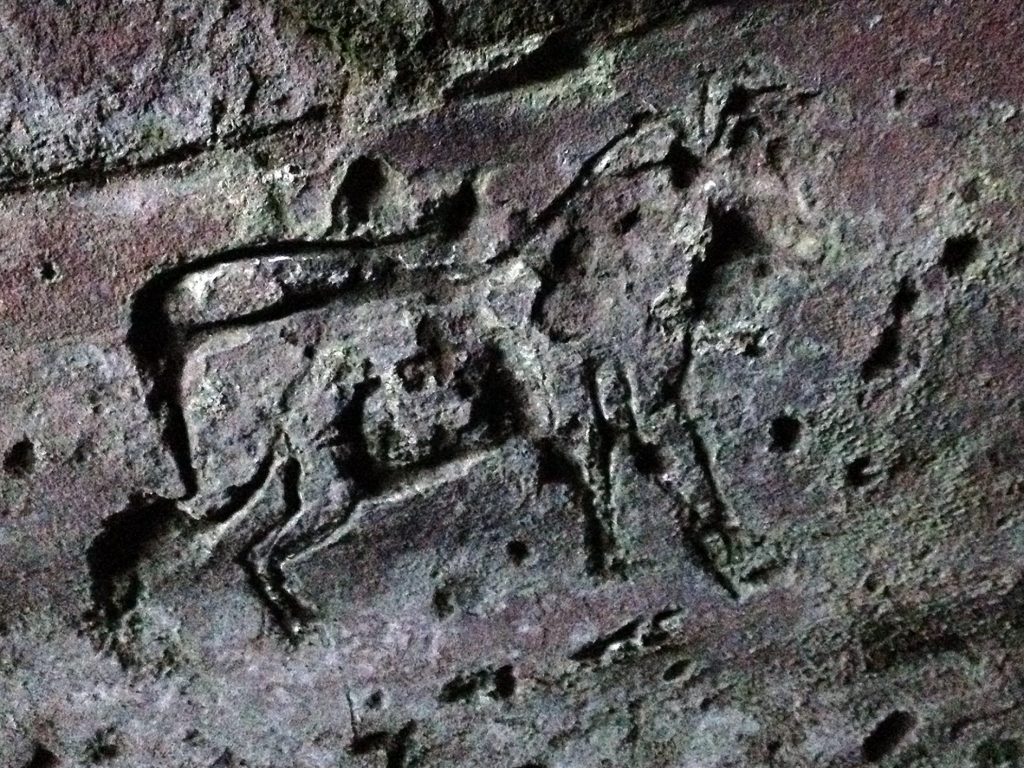 Horse, bull or even a lion figure in Jonathan’s Cave. Compare it with the photograph of the same carving from around 1900 below. 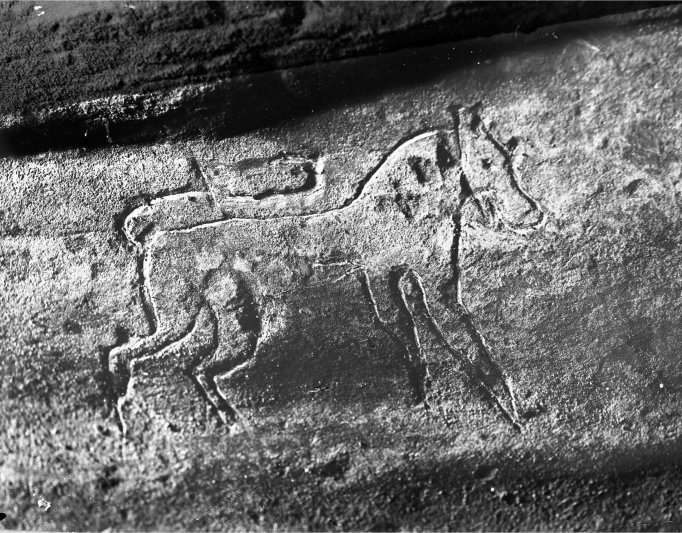 The horse-like figure in Jonathan’s cave as it appeared around 1900.

Since 1986, the Save the Wemyss Ancient Caves Society have cared for and raised awareness of the immense historical and archaeological value of the caves in their regular summer programme of cave tours and events. A guided tour with an expert is the best way of encountering the carvings and you can find details of how to do this on the SWACS website. 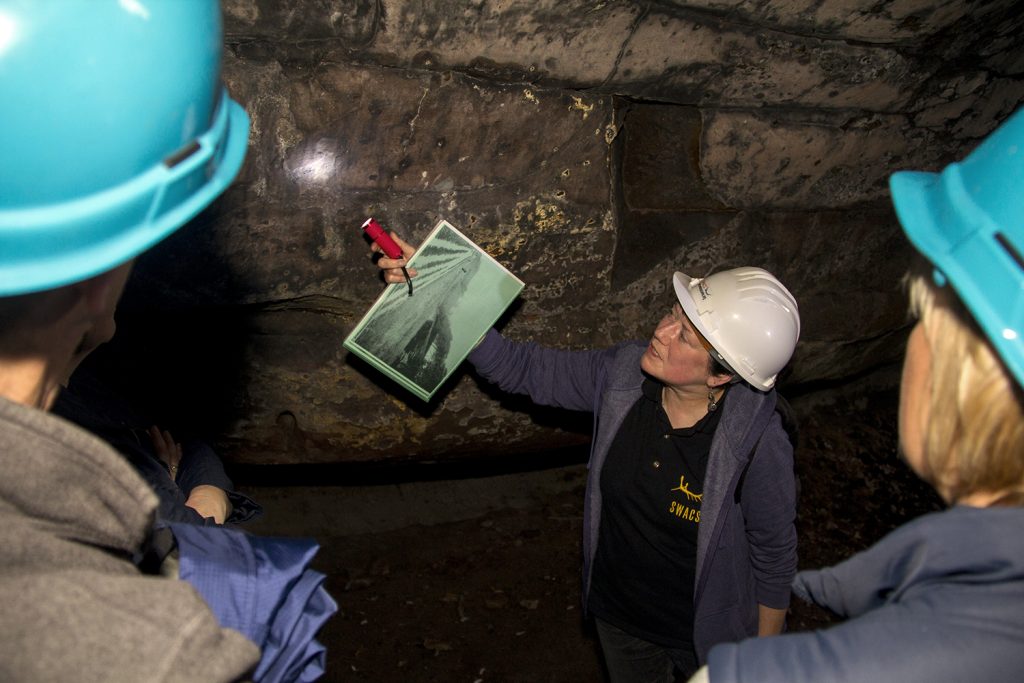 Sue from SWACS leading one of the Society’s regular summer cave tours. Photo by Gavin Hugh

Their most recent major project in collaboration with archaeologists from SCAPE, University of St Andrews and specialist archaeological surveyors has been to create a digital future for the Wemyss Caves through digital documentation and interpretation.

This x-ray view of the caves is a point cloud created by laser scanning each cave and the coast edge.

You can read about the project fieldwork and techniques in our earlier blogs A Digital future for Wemyss Caves Pictish Carvings and Wemyss Caves 4D continues… The Wemyss Caves 4D website brings together everything we know about the Wemyss Caves in one virtual place. You can discover and explore their remarkable histories for yourself by going to www.4dwemysscaves.org.