Why on earth would you cut hundreds of small circular holes into the hull of your boat? Only to painstakingly plug them all again? 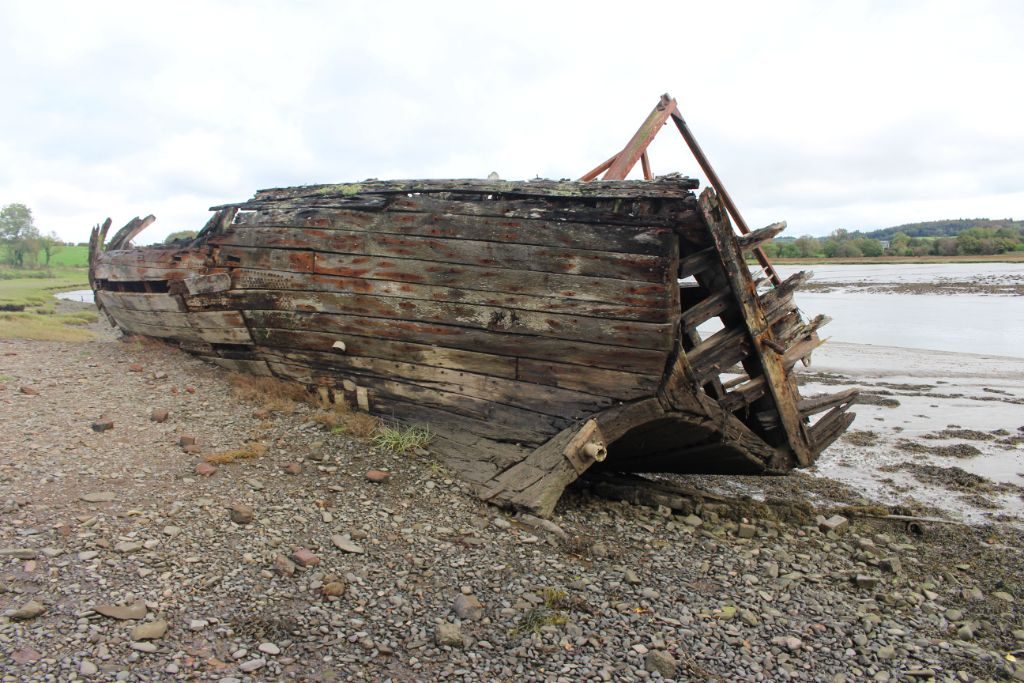 That was a question we pondered in 2015 when we first visited Gibbhill in Kirkcudbright Bay and saw this old wooden trawler resting on its starboard side, exposing the holes which riddle the lower planking. Kirkcudbright Bay is a good natural anchorage, and has a long history as a harbour and more recently as a commercial fishery port, but this boat was particularly intriguing. 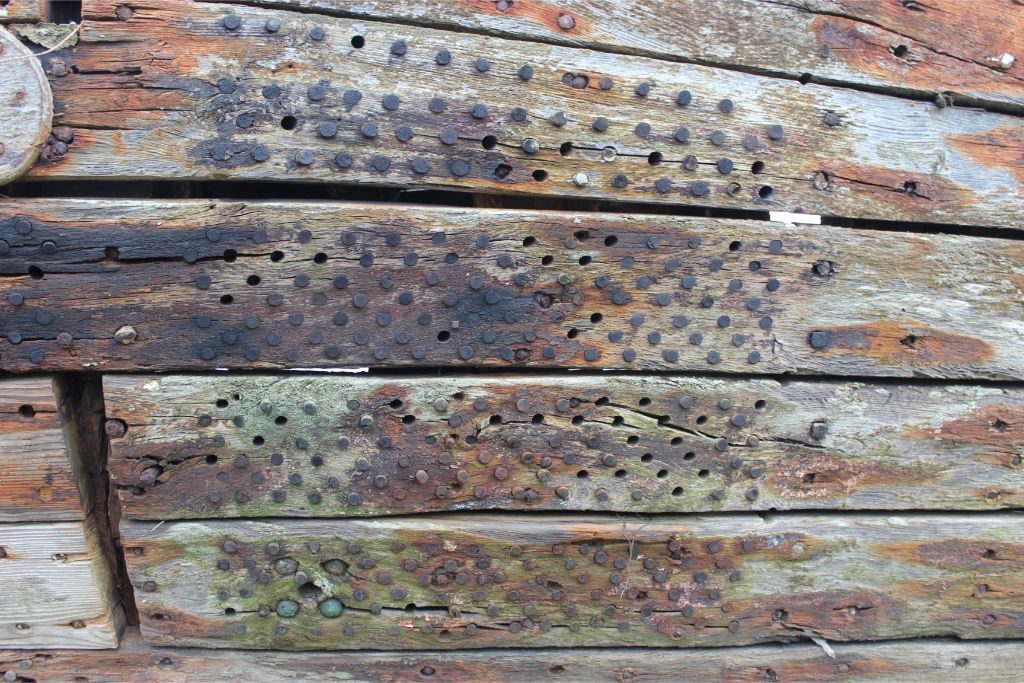 Thanks to the expertise of Steve from the Nautical Archaeology Society, we learned that this is a wet well trawler. Water flowed freely through the holes in and out of the hull below the waterline, flooding the central compartment of the boat. Watertight bulkheads at either end of this compartment contained the water, keeping the bow and stern buoyant. This wet well allowed the fishermen to keep the catch alive, ensuring it arrived at market as fresh as possible. However in this case, each small hole had later been individually plugged with wooden pegs. 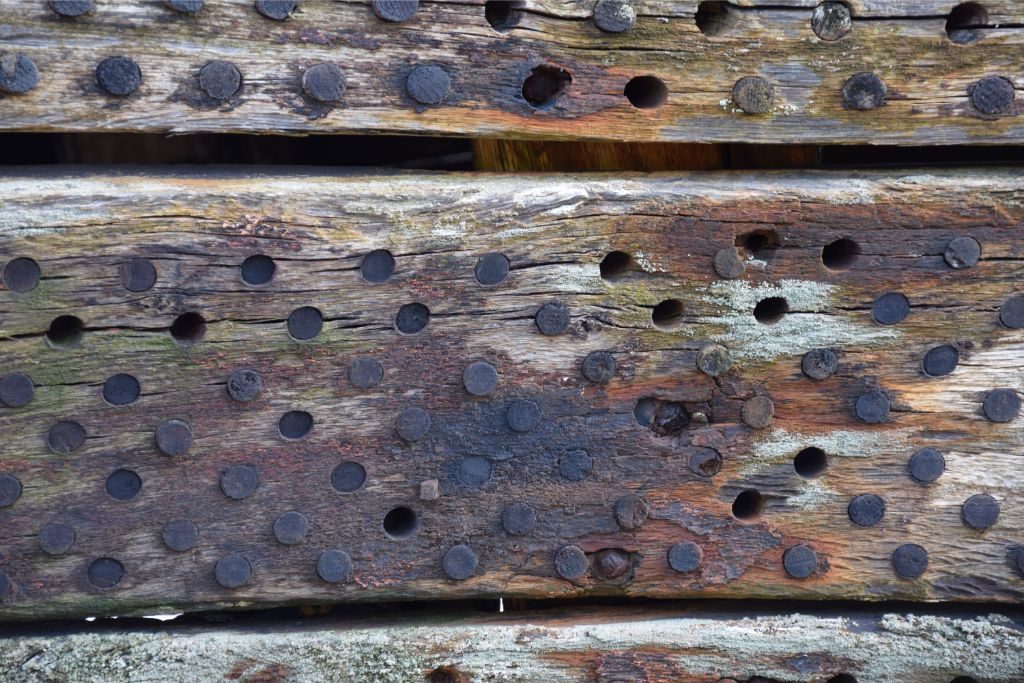 Not only is this boat unusual, it’s also very fragile and deteriorating fast. So to record it in detail we teamed up with the Galloway Glens Landscape Partnership, local volunteers, the Solway Firth Partnership and the NAS. 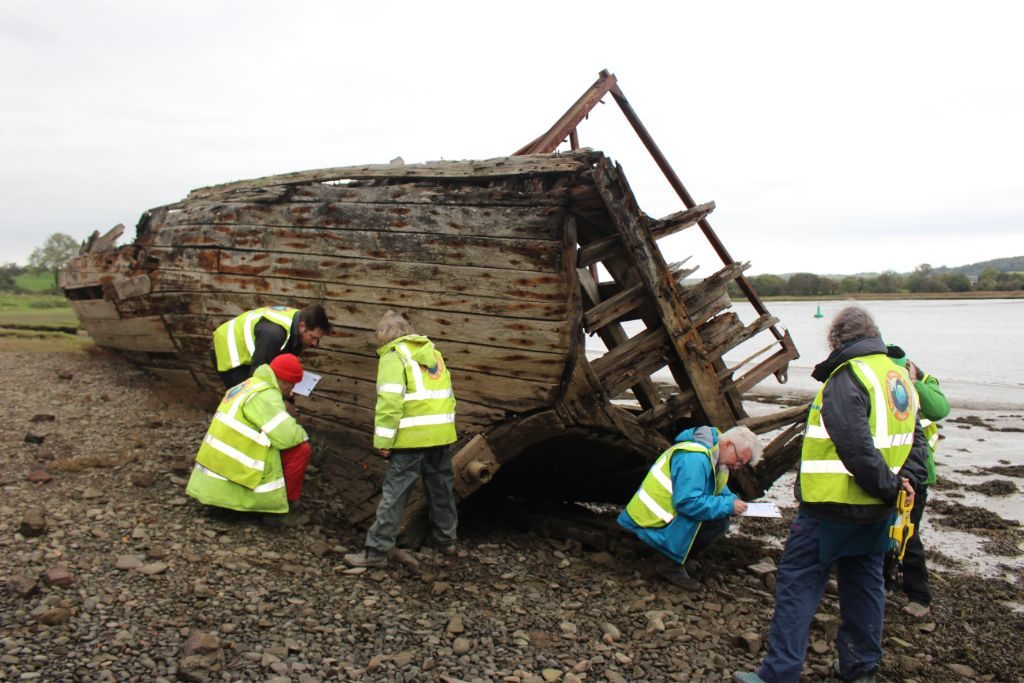 Meanwhile, local historians contributed what they know of its story. David Collin recalled its name, the Fauna, originally a Belgian boat which visited the Solway coast from Fleetwood in the 1970s, fishing for sole. While sitting at the quay, the Fauna was caught between a larger boat and the quayside, damaging the hull. After being laid up, the engine was eventually salvaged before the Fauna was finally discarded. It’s common for vessels that have reached the end of their working life to be abandoned on the banks of the river out of the way of the busy harbour, and Gibbhill has long been used as a boat graveyard – convenient for towing unwanted hulks to, but out of the way of the bustling port and working vessels. 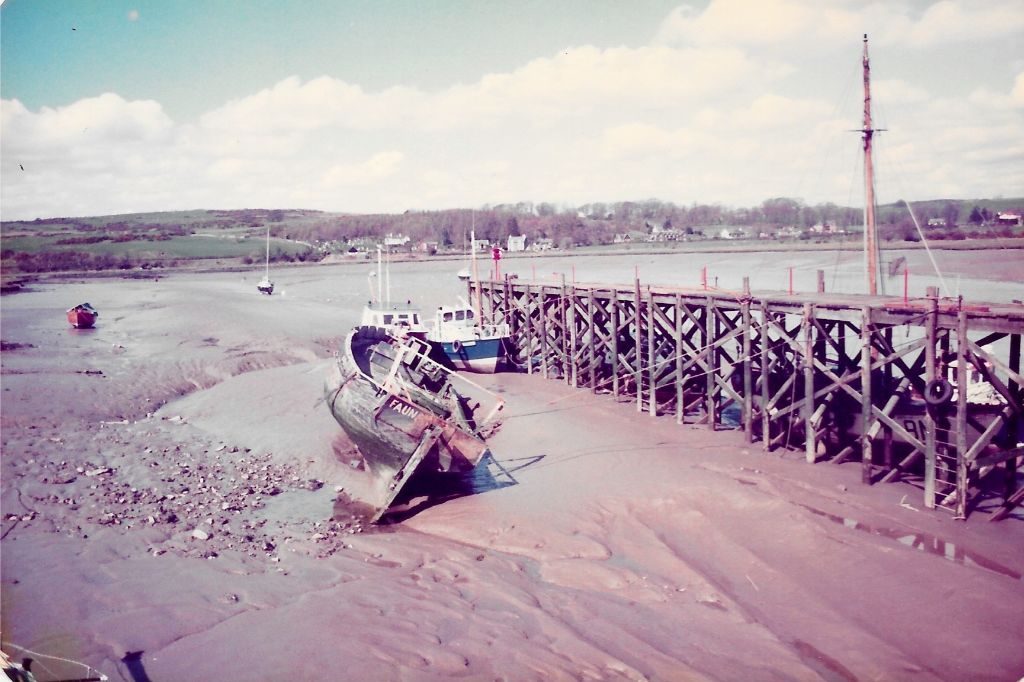 With Steve’s expert eye for guidance, we gleaned details of its construction and use from the disintegrating hull. These suggest that before the Fauna came to this sad end, it had a long life of use, modification, adaptation and upgrade.

It looks like it was originally a sailing trawler, as suggested by a small mast step near the bow. Although we don’t know exactly how old it is, this may suggest a build date in the early 20th century. Later, it was converted from a wet well to a conventional fishing boat, when the holes were plugged to make the hull (mostly) watertight and some of the original planking was replaced. Further upgrades followed when first one and then a second, larger, engine were retrofitted. This required significant alteration to the stern and rudder to accommodate the propeller. 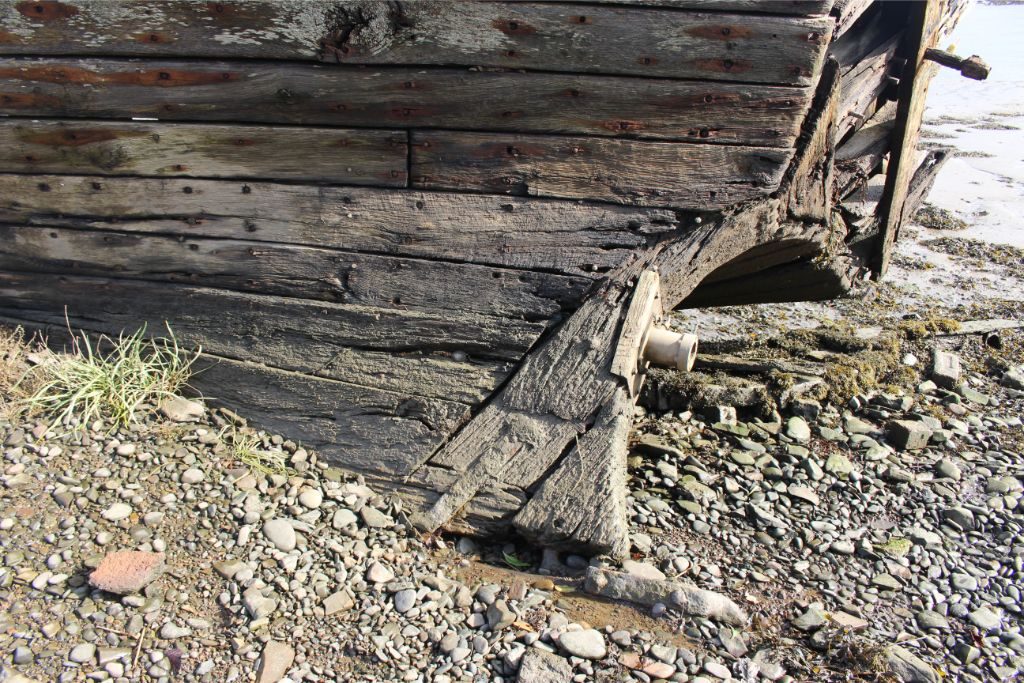 The stern post was cut and reshaped for the propeller, and a new mounting created for the rudder, which has fallen off but still lies nearby

Another mystery was presented by the construction of the hull. The bow is very sturdy with double frames and an enormous timber stem post. However, the central wet well section is much more lightly built, with widely-spaced frames. This more flimsy structure may not have mattered too much. The shallow, beamy shape shows that the Fauna was built for rivers or estuarine waters rather than to ply the open sea. The massively-built bow also looks like it may once have been further reinforced. A long patch of iron staining marks the waterline and follows a line of tiny wooden pins in the planking which seem to have attached something, perhaps textile cushioning between the timber and metal armouring? All this led us to speculate whether it may have been an ice breaker when working on rivers in cold continental winters. 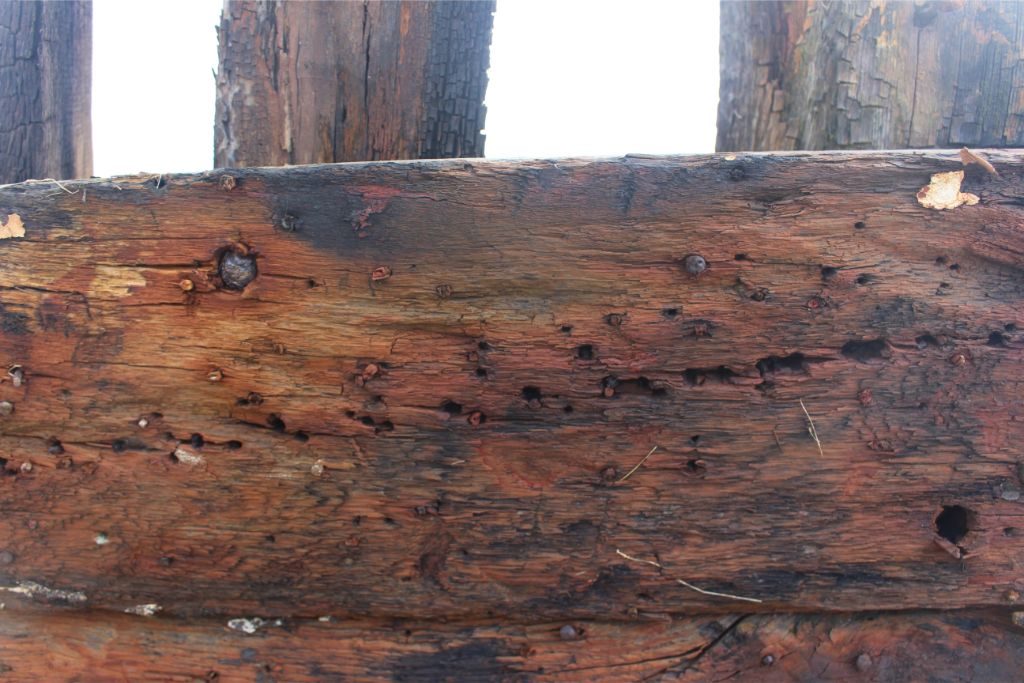 Lines of tiny holes, some with minute wooden pins still in place follow the iron staining along the waterline 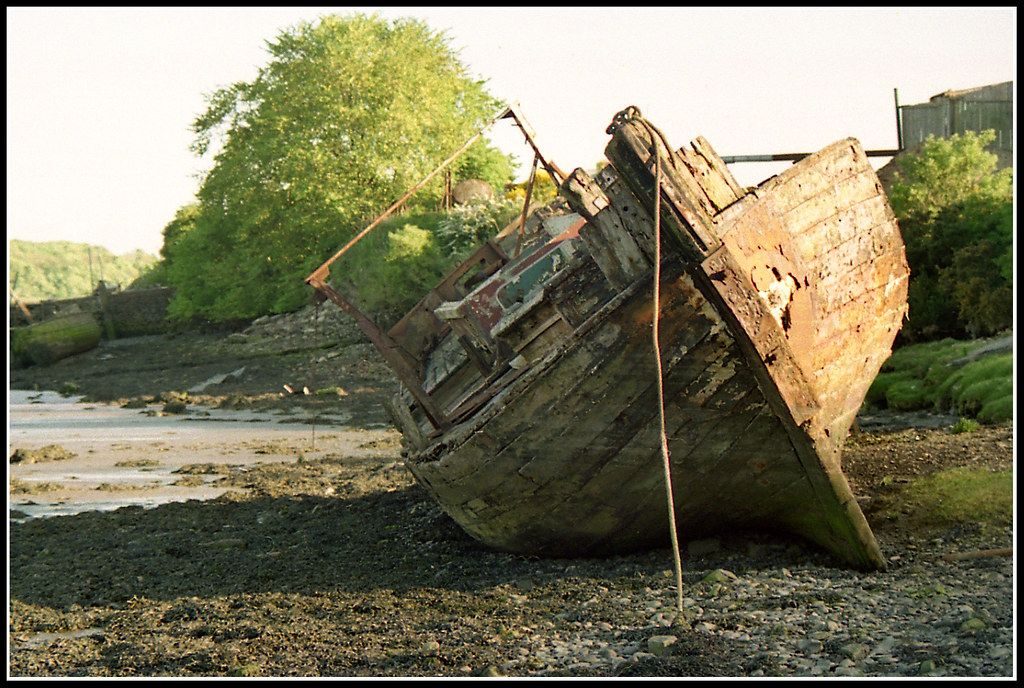 This photo taken in June 1995 by flickr user Rob Steward (Rob-33) shows the remains of metal sheeting around the stem post, which may have originally covered more of the hull and strengthened the bow

Our detailed examination of the wreck threw up many more questions than answers about the fascinating, complex biography of this long-lived old boat. Curiouser and curiouser was the repeated mantra of the weekend.

One thing is clear, though – the remains are in poor state and their deterioration is accelerating. 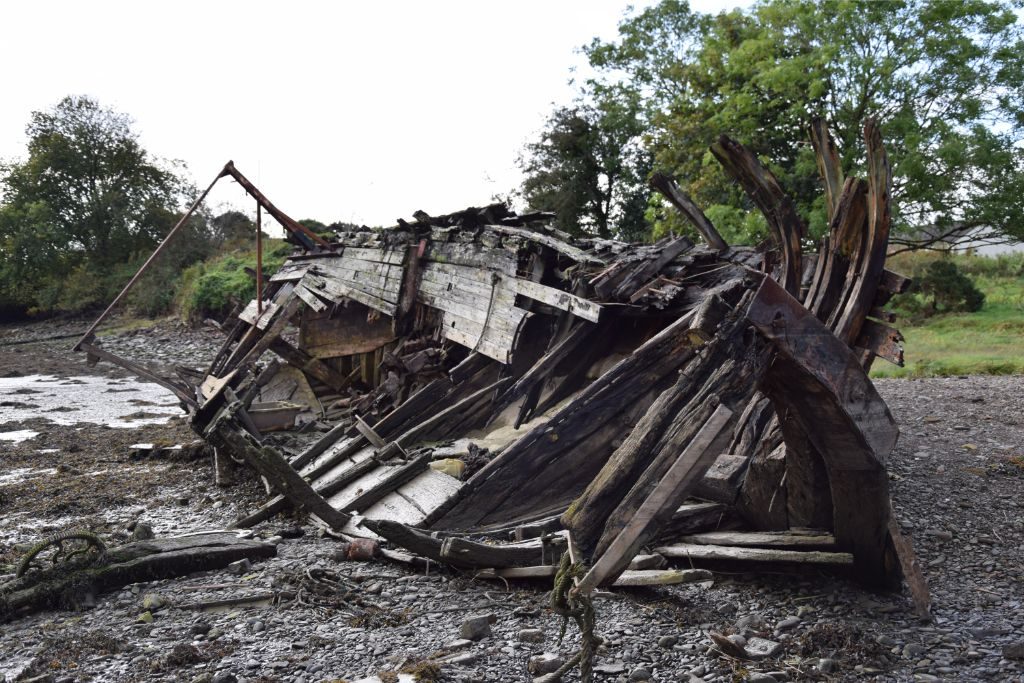 Regular monitoring visits are needed. As the hull disintegrates, more details may be revealed that will add to the Fauna’s story. 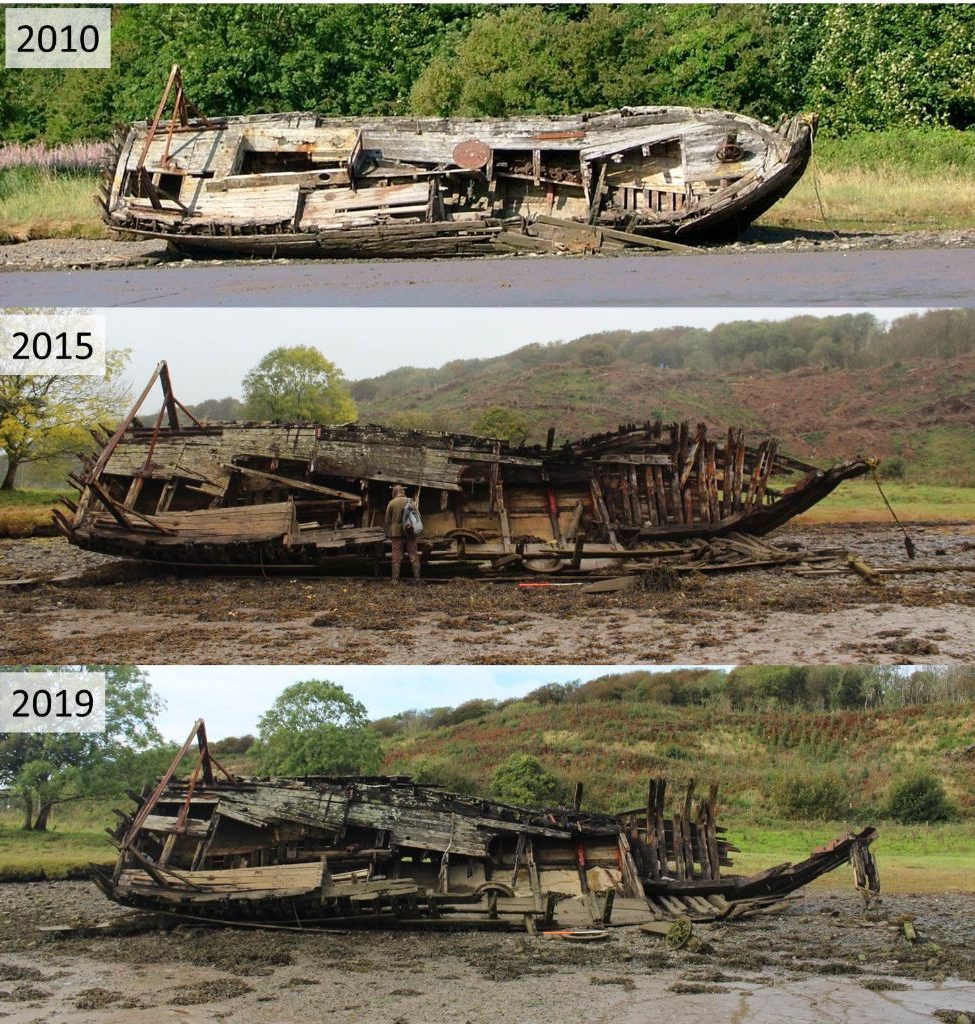 David Collin shared this photo from 2010. In just 9 years, the Fauna has deteriorated badly.