A walk of discovery in my own backyard

Earlier this year I went for a walk along a local stretch of the Fife coast, starting at the famous St Monans salt works and ending at Pittenweem. This must be one of the busiest sections of the Fife Coastal Path, and there are numerous recorded coastal heritage sites along the route. However, in just a short walk, I encountered several unrecorded sites. Two are probably the remains of additional salt making sites, while others may relate to the kelp industry. 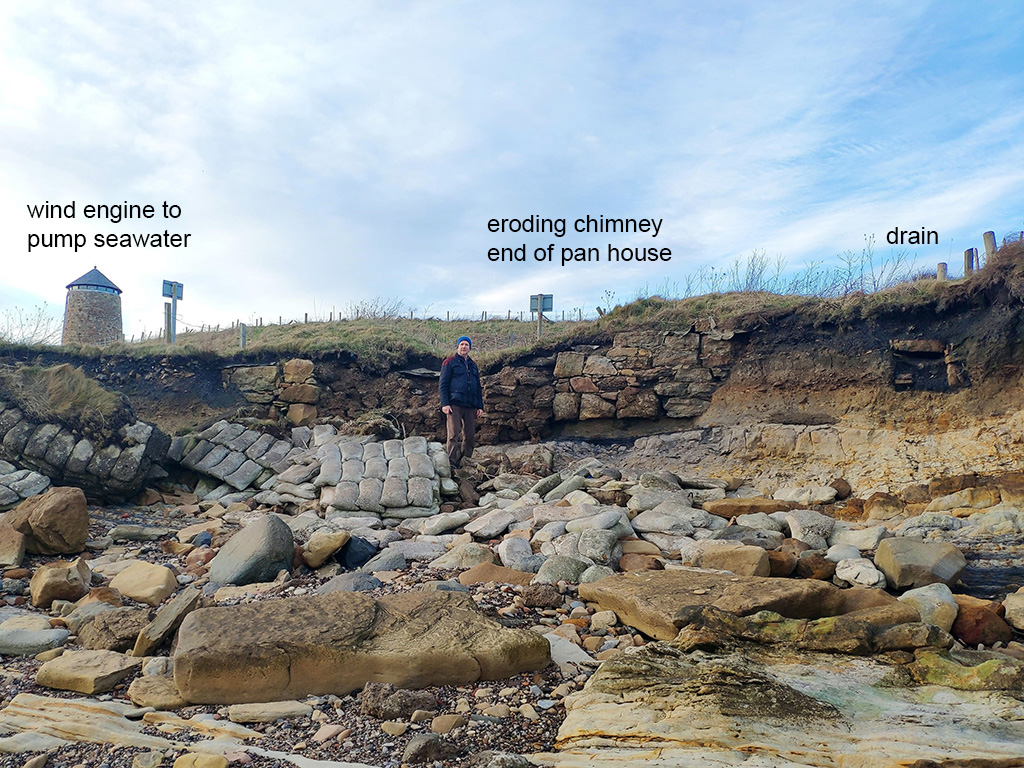 Jumping down onto the beach beside the St Monans salt works, you see the amazing archaeological evidence of this 18th century industrial complex in the coastal cliff. The walls and foundations of some of the stone-built salt pan houses, layers of vitrified coal from the pan hearths, and the drains that brought sea water into the buildings and drained the pans are all clear to see in the eroding section. What’s visible is constantly changing because of continous erosion.  There is nowhere else in Scotland where you can see such impressive archaeological remains of this once vital industry. Past attempts to deflect erosion are also succumbing to the sea, such as the cement filled sandbags installed in the 1990s. You can find out more about the St Monans salt works in the excellent report of excavations carried out in the 1990s, freely available to download from the Tayside and Fife Archaeological Committee website. 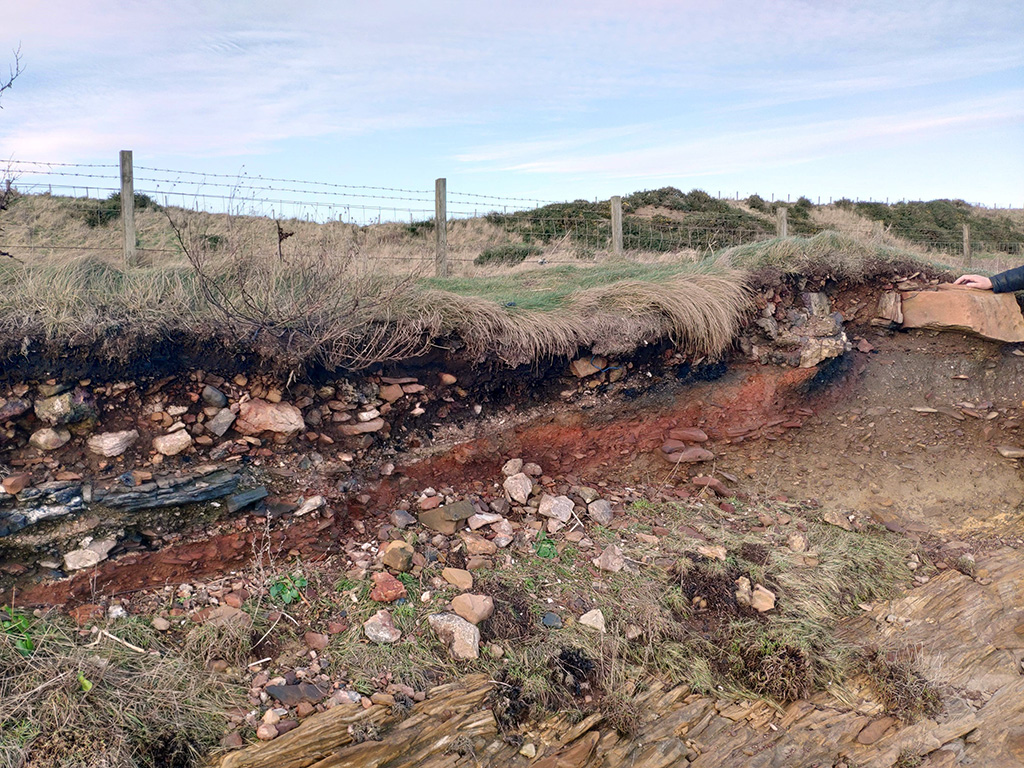 Just around the corner, a thick red band visible in the coast edge is evidence of intense heat that has scorched the underlying subsoil. 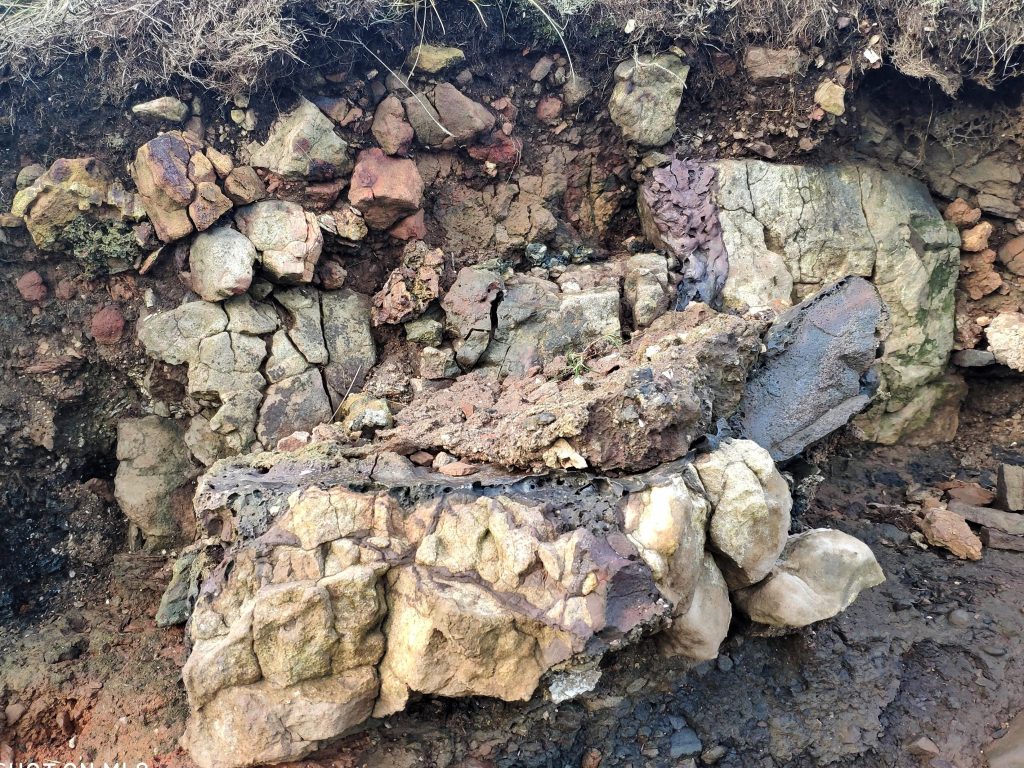 Looking closer at the stone structure on the right and you can see how exposure to extreme heat has melted the surface of the sandstone. The stone structure looks like a flue, and the most likely explanation is that this is the base of a hearth from an unrecorded salt pan near to the St Monans complex. 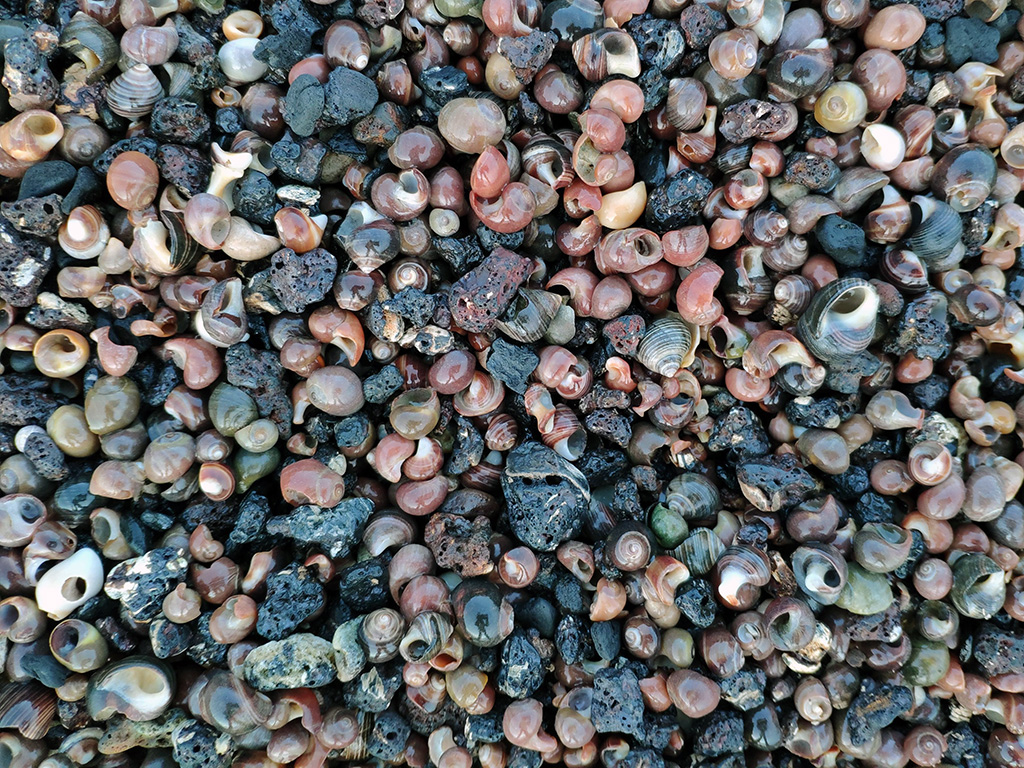 The second new salt making site was encountered on the beach on the approach to Pittenweem. I realised I was crunching over pebbles of fuel slag and the trail led to this feature in the coast edge 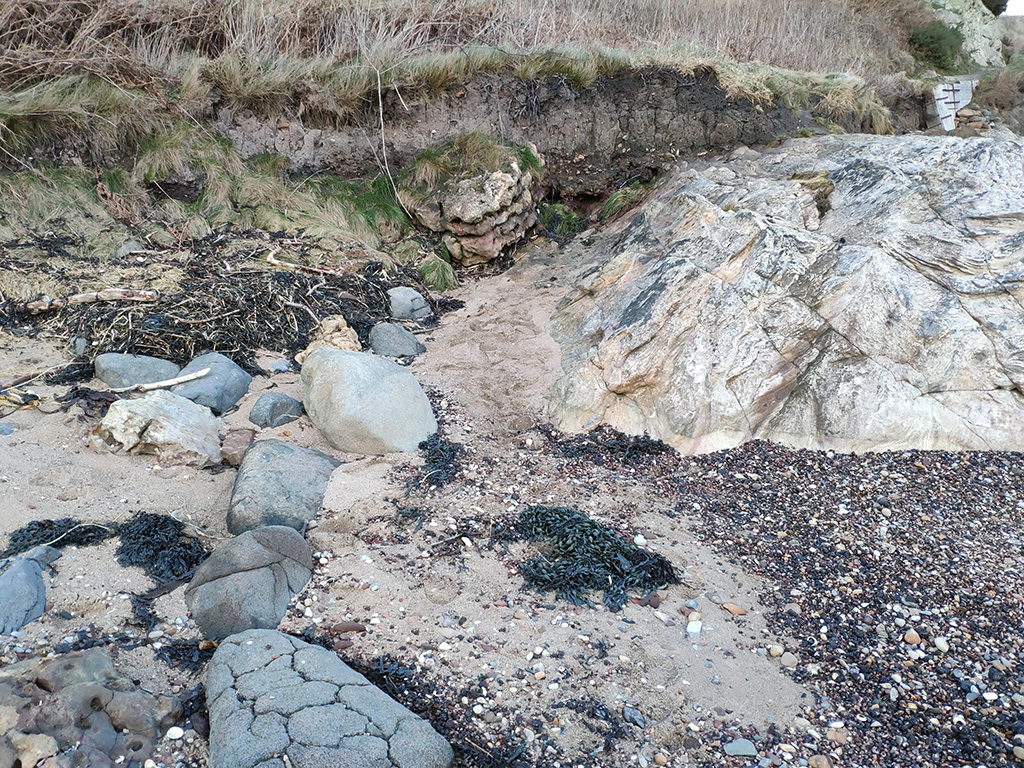 – a channel formed of bedrock on one side with the remains of a wall on the other, filled with distinctive lumps of fuel slag. 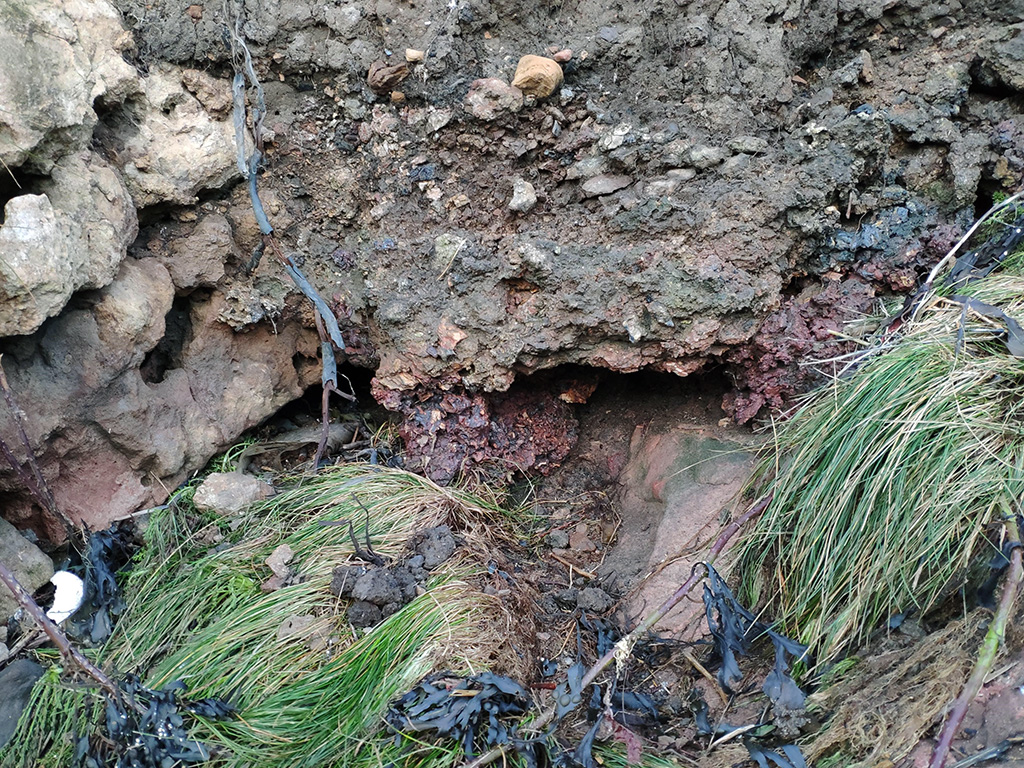 When found in situ in a coastal location, fuel slag like this is often an excellent sign of historic salt making. Poor quality coal, known as pan coal, was fired in great quantities and at high temperatures, and the many impurities in the coal vitrified into a light glassy material. 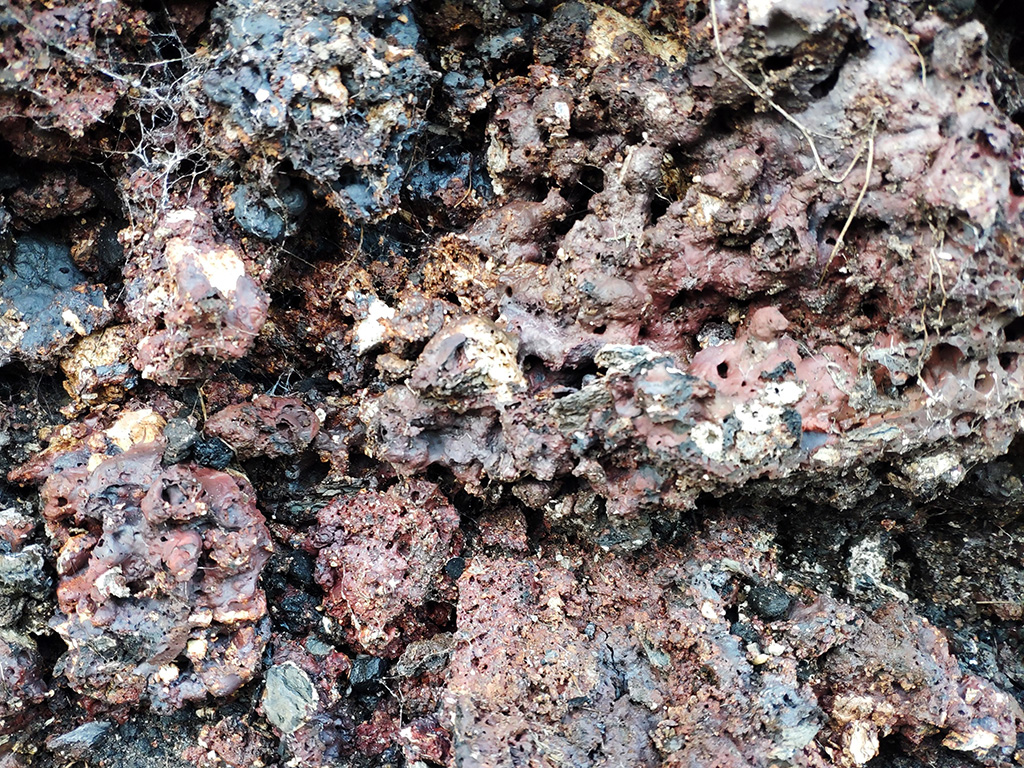 It is difficult to interpret the feature from what has been exposed, however the evidence makes this a contender for the site of the historic Pittenweem salt pans. These were constructed much earlier than those at St Monans and a reference dating to 1587 tells us that Dame Margaret Balfour was granted a seven year right to make ‘salt upon salt’ in Pittenweem for use by fish curers (page 38 The Scottish Salt Industry 1570-1850, by Chris Whatley).

Two other new sites encountered were these distinctive pits, about 2-3 m across and 1m deep in size with heat scorched sides. They probably relate to kelp production, a much less well-known coastal industry in Fife. We use the term kelp today for seaweed, but its historical meaning is the glassy substance, rich in potash and soda, derived from the burning of seaweed. Kelp was widely used as a raw material in the early glass, soap and other chemical industries before a cheaper method of producing the same chemicals was invented.

If you were to come across features like these in the Northern or Western Isles, where there is abundant archaeological evidence for kelp production, their interpretation as kelp burning pits would be straightforward. This is not the case for Fife, where there is no recorded archaeological evidence of kelping. However, the earliest historic reference to the kelp industry in Scotland actually comes from Anstruther, when in 1694, the Anstruther Council received the offer of £4 from an Englishman for the privilege of cutting seaweed and making kelp from it. The Old Statistical Accounts, written in the 1790s, also mention commercial kelp production in Anstruther, Pittenweem and Wemyss. So, these features may provide the first documented archaeological evidence for the presence of the industry in Fife – and we will certainly be on the look out for more kelp related sites in the future.

My unexpected walk of discovery shows how rewarding repeat visits to even well-known and well-recorded stretches of coastline can be. In this case, low vegetation and winter waves had probably made these features much more visible than usual 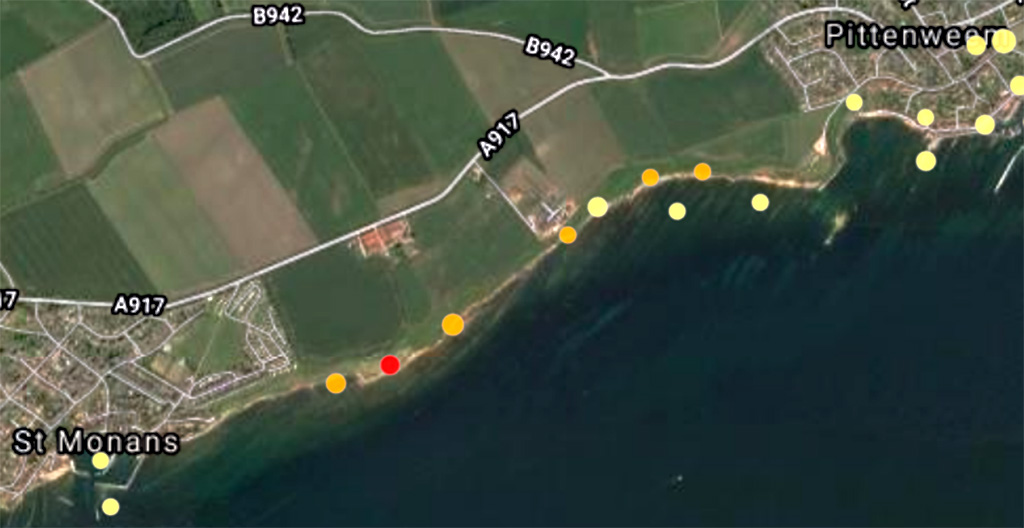 Screenshot of recorded coastal heritage sites, including those described here, on the Sites at Risk map 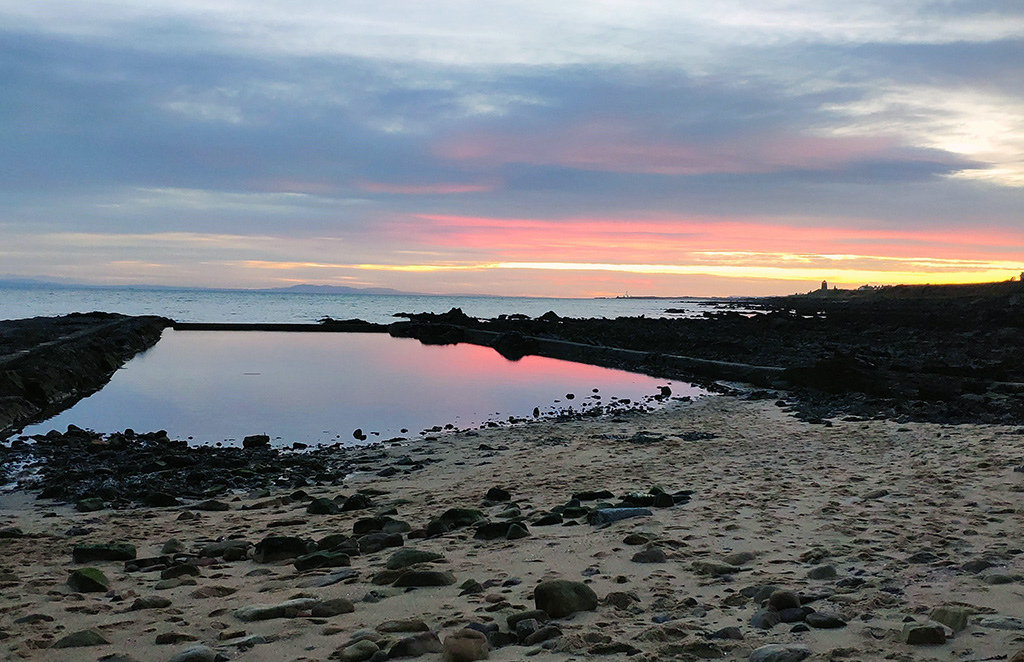 A fitting end at Pittenweem’s historic tidal swimming pool. These beautiful places are a feature of Scotland’s coastline and hopefully part of its future. The West Braes Community Project has plans to restore this one.