Site 8915 on the SCAPE register is Sgeir nam Portan. Derived from the Gaelic sgeir, originally Old Norse rocks exposed as tides drop (the same derivation as Skerry), and portan (an alternative version of partan), small edible sea-crab of a black colour. Skerry of the Crabs would be a good translation. The site is on the western coast of South Uist, at the end of the Kildonan township road and track used by  crofters for collecting tangle.

The coastal survey of Uist and Benbecula first discovered the site in 2005. The survey followed a severe storm in the Western Isles, the worst in living memory at the time. The original site description reads:

“An old ground surface, comprising anthropogenic deposits, has been exposed in plan due to recent erosion. The exposure measures c. 14 x 3.5m. It is located on the foreshore between a rocky shelf and a sand and shingle beach and is inundated at high tide. The deposits contain inclusions of animal bone, including cattle bone and burnt or charred bone, shell (cockle, winkle, and mussel), peat ash and a large amount of struck quartz. Two small metal objects were present, but no pottery was noted. No trace was found of any deposits in the nearby cliff section, which is c. 9m behind the exposure. The level at which the exposure lies, however, is likely to be lower than the base of the section and thus it is probably that the deposits may extend inland below the level of the cliff. The cliff section is over 1m high and of wind-blown sand.”

Sgeir nam Portan was one of a handful of South Uist sites to be given the highest ‘at risk’ designation in SCAPE’s analysis of the coastal zone assessment survey results in 2010.

The begining of my monitoring

In February 2015, early in the Scotland’s Coastal Heritage at Risk Project, I paid my first site visit to Sgeir nam Portan. I noted that “these remains are being actively destroyed by the sea and it is recommended that the site be properly assessed without delay.”

As a novice, I felt I was underqualified to say too much, but I did back up my sentence with photos. At that stage the total exposure was only around 2 or 3 square metres, considerably less than the first reported exposure of 14 x 3.5 metres! But the normal tides in that area tend to accrete materials quite readily. 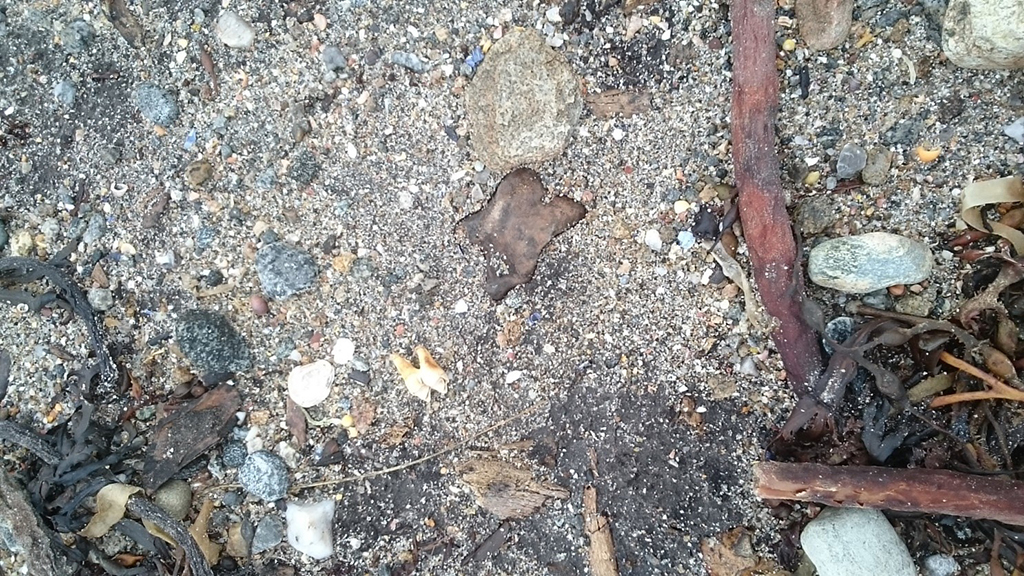 First photo of part of the site, with both earth-fast & loose artefacts amid the sea-swept detritus © SMD, February 2014

My next visit was in December 2015. I had been concerned that nothing seemed to have been done about a site which I thought was (potentially) important. It seemed that it was only me who gave this small patch of beach even a cursory thought. But the December visit revealed an even smaller patch of visible ‘old ground surface’. I recorded it  in my update as less than 1 square metre, although it still appeared to have a good selection of embedded artefacts.

Nothing to see here!

Although I continued to visit the site every year, I made no further updates as the site was completely ‘lost’ beneath shingle and detritus. I was reassured as it remained in this ‘dormant’ condition through the rest of the decade, including 2019 when the SCAPE team visited Uist, and we paid a site visit to look at the shingle! 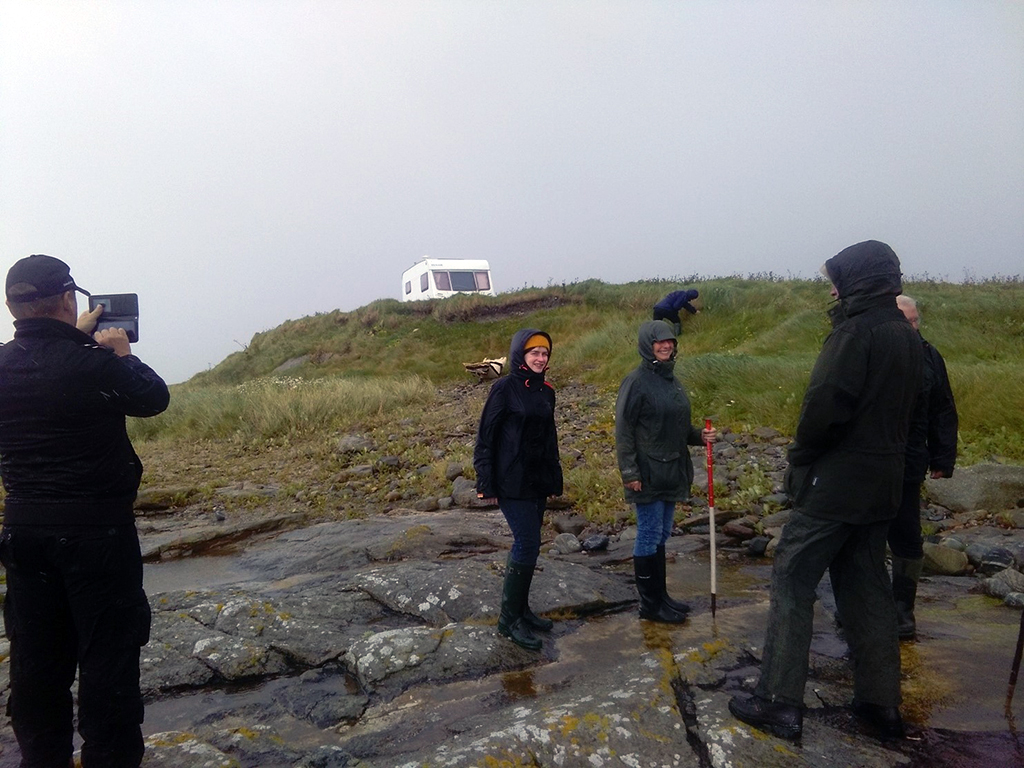 In January 2020, post-storm Brendan, ever the optimist, I returned to the site. I was rewarded with a newly exposed ground surface adjacent to some possible masonry. There were several loose artefacts visible across the surface, and notably, a complete bovine metatarsal bone, still partly embedded in the peaty surface. From my previous knowledge of the site and my experiences during the investigations at Borve Bay, Lionacleit on Benbecula, I felt reasonably certain this was probably Bronze Age. It’s unusual to find larger bones like these intact, as they are normally broken open to extract the marrow, a favoured food of the times. The Hebridean Naturalist published a report of the find in November 2020. 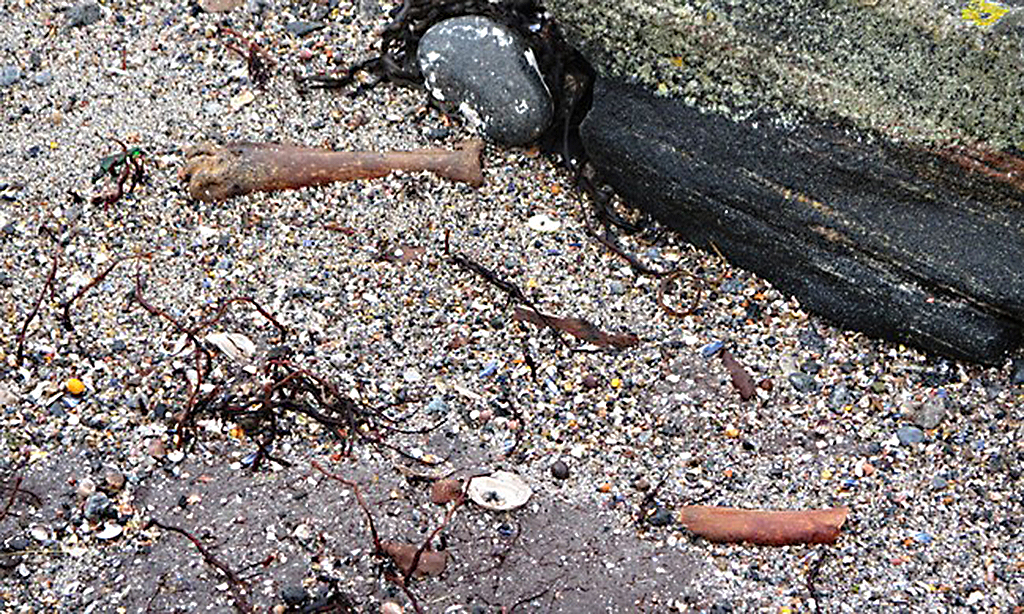 A complete bovine metatarsal and other artefacts, some loose, in the new exposed ground surface © SMD January 2020

My next visit was in November 2021, by which time the site had been covered, once again, by shingle.

February 2022 was far too early to make another field visit, but as I was passing the site while undertaking a section of the RSPB’s Beached Bird survey, I could not resist the temptation to take a look. There was now a larger exposure of the midden surface visible, and I was able to get some photos, before completing the bird survey to Rubh’ Aird-mhicheil. 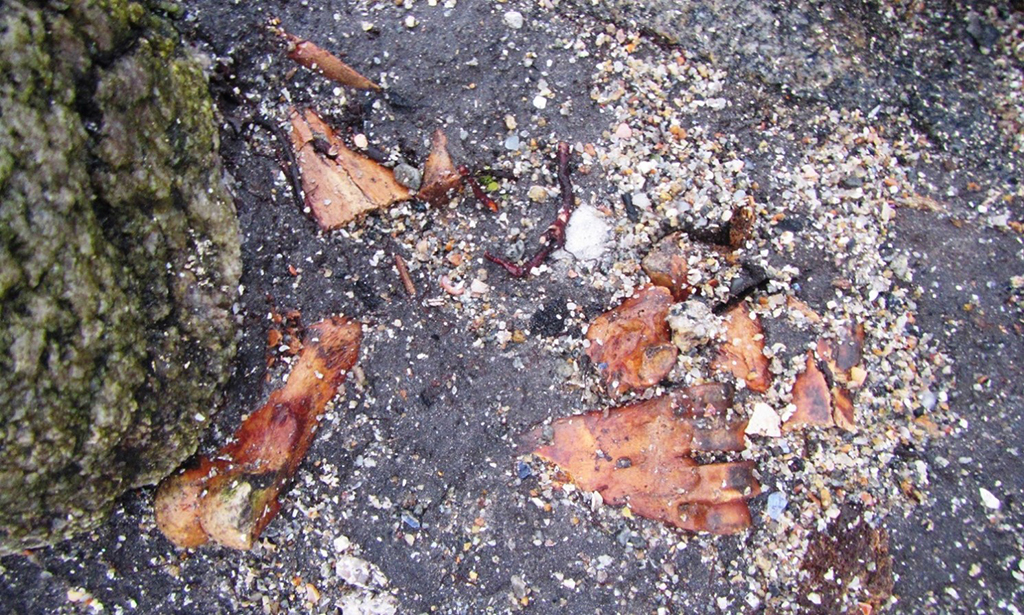 By chance, a couple of weeks later, Dr Fraser Hunter and Dr Hugo Anderson Whymark from National Museum of Scotland were in Uist working on the Uist Virtual Archaeology Project. They visited the site and were excited about the quality of material on the surface. They found bone, struck quartz, flint tools, some pottery sherds, and a hammer stone. 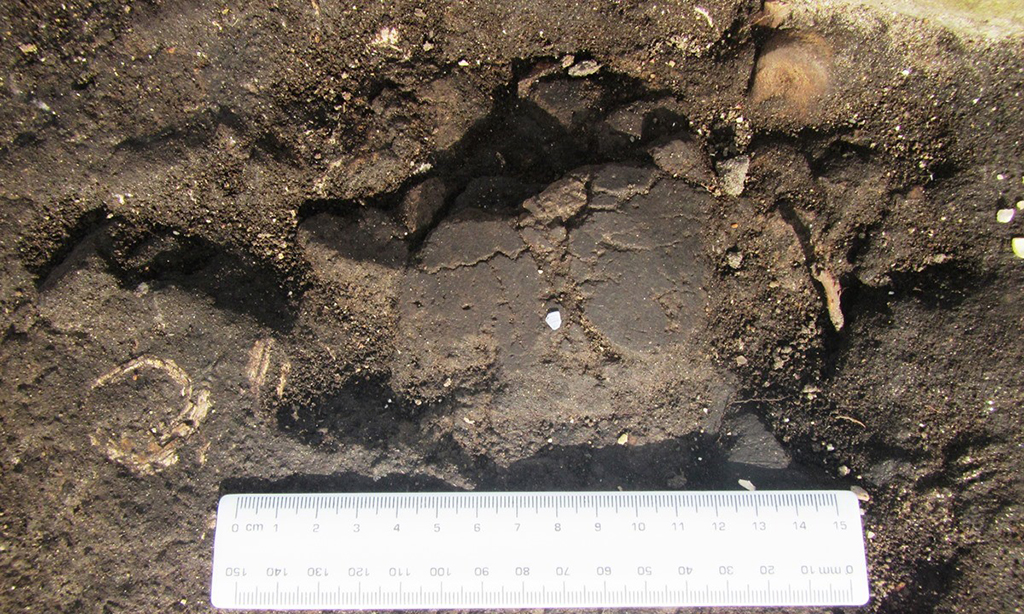 A small team from Uist Community Archaeology Group (UCAG) visited the site a few days later to get a better idea of the recent changes. They recorded over a dozen struck flint tools on the surface and a large sherd of a prehistoric pot which was left in situ for further investigation and recording. They noted an arc of earth-fast boulders  at the other end of the site – a wall? 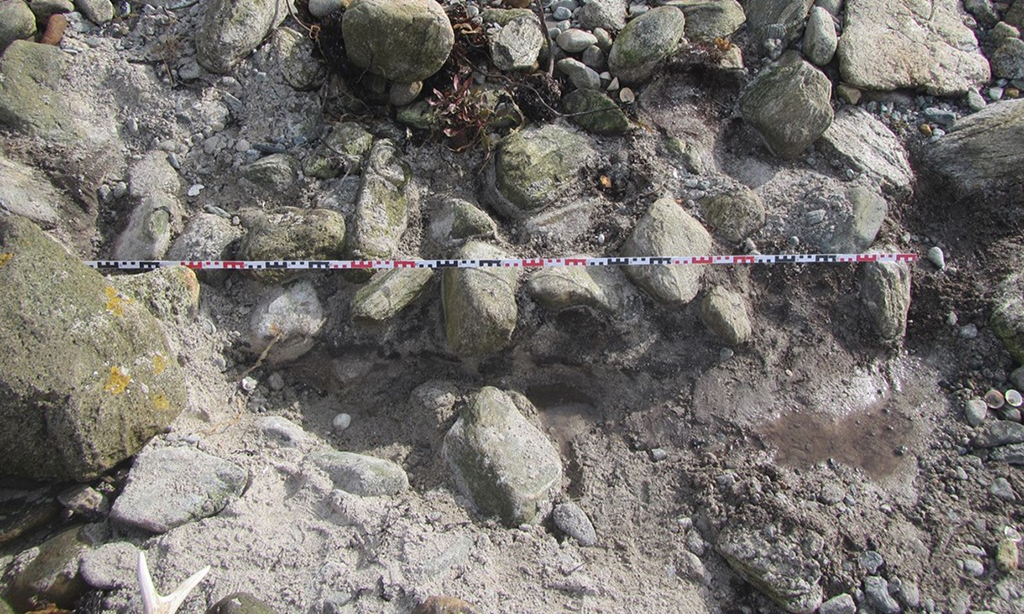 The exposed part of the site and the information that it contains is now very vulnerable to loss because of the recent erosion. But this also presents us with an opportunity to find out more about it. And so the UCAG team, led by archaeologists at UHI Outer Hebrides hope to do a targeted investigation over the summer. Thankfully the site is just beyond the reach of high Spring Tides. It it is these boosted by storm surge which are the chief danger to the site, so fingers crossed for now! 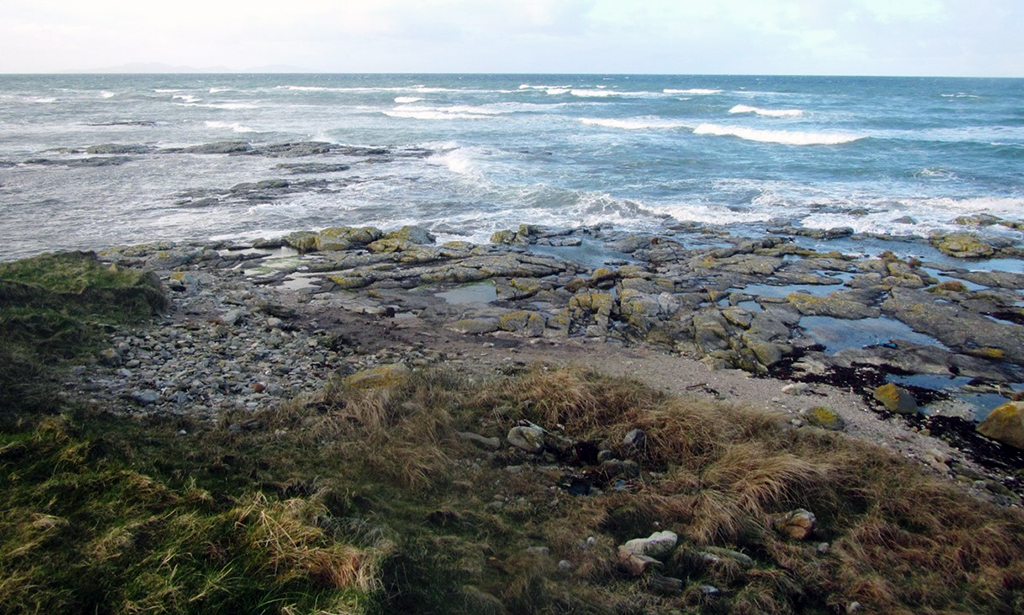 Simon Davies is a retired dentist living in South Uist. He is interested in everything! But especially fond of the natural world, archaeology, and local history. Simon is one of SCAPE’s most prolific contributors of new and valuable information about the coastal heritage of the Uist archipelago.