Taking to the skies to explore the Moray Firth fish traps

In April we kicked off our new Coastal Zone Assessment Survey of the south Moray Firth and Aberdeenshire coasts. Over two trips with local volunteers from NoSAS, we walked much of the coastline from Inverness to Culbin Forest. Along this stretch of coast, the low tide reveals several clues about its fishing past. A recurring theme is the presence of fish traps in a variety of shapes and sizes. In fact, there are so many examples of fish traps here that a fish trap survey was carried out in 2004, dedicated to the recording of these features.

The fish traps range from wooden stakes to sizeable stone structures. Faint alignments of stumps of wooden stakes projecting from the shifting intertidal muds and sands, are a reminder of the industry which once occurred at that location.  The more substantial remains of the stone fish traps come in a variety of shapes and sizes and in many cases stretch far into the waters of the firth. As they disappear beneath the waves, their footprint can often still be seen thanks to the floating seaweed attached to the surface of the submerged boulders. The number and variety of the fish traps demonstrate the ingenuity and strong fishing heritage of these communities through the ages.  All sorts of fish were caught in the traps, but herring is often referred to in contemporary records, and stake nets particularly targeted valuable salmon.

Even at low tide it was not possible to walk out into the deep, sticky intertidal mud to investigate the full extent of these structures for fear of getting trapped – albeit not quite in the same way as the fish once would have been! Luckily for us the weather conditions were calm and dry, so we powered up the drone and took to the skies to investigate. 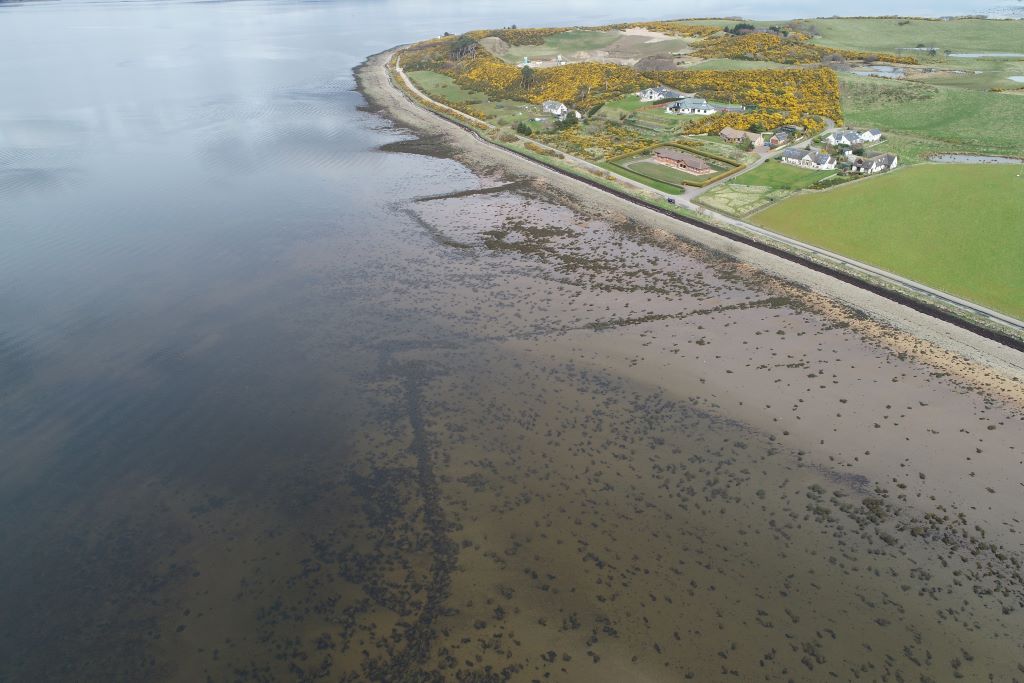 Brecknish, approximately 6 km east of Inverness, is home to two of the larger boulder-built fish traps that we encountered along this stretch of coast. 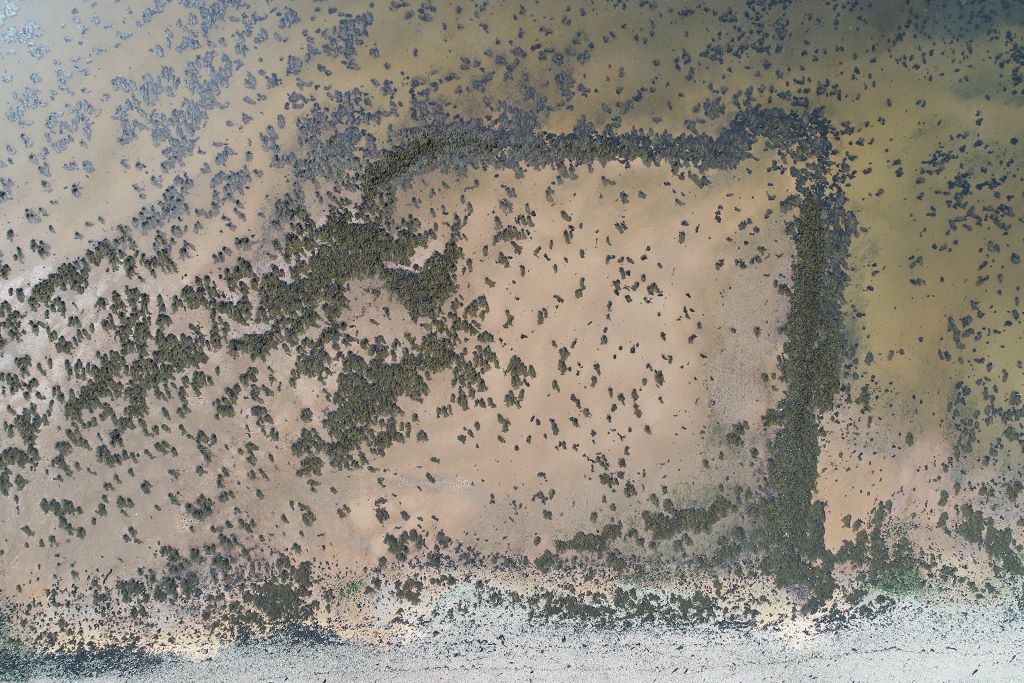 This overhead shot shows the full extent of the smaller of the two. The structure is made of two boulder walls, one built perpendicular to the coastline and a second extending out at a right angle with a box shape structure where the two walls meet.  The shape of the trap channelled and trapped fish into a net positioned in the box on the ebb-tide. The boulder walls of fish traps also enticed fish into them to feed on small creatures living in the gaps between the stones and the seaweed which quickly colonised them. 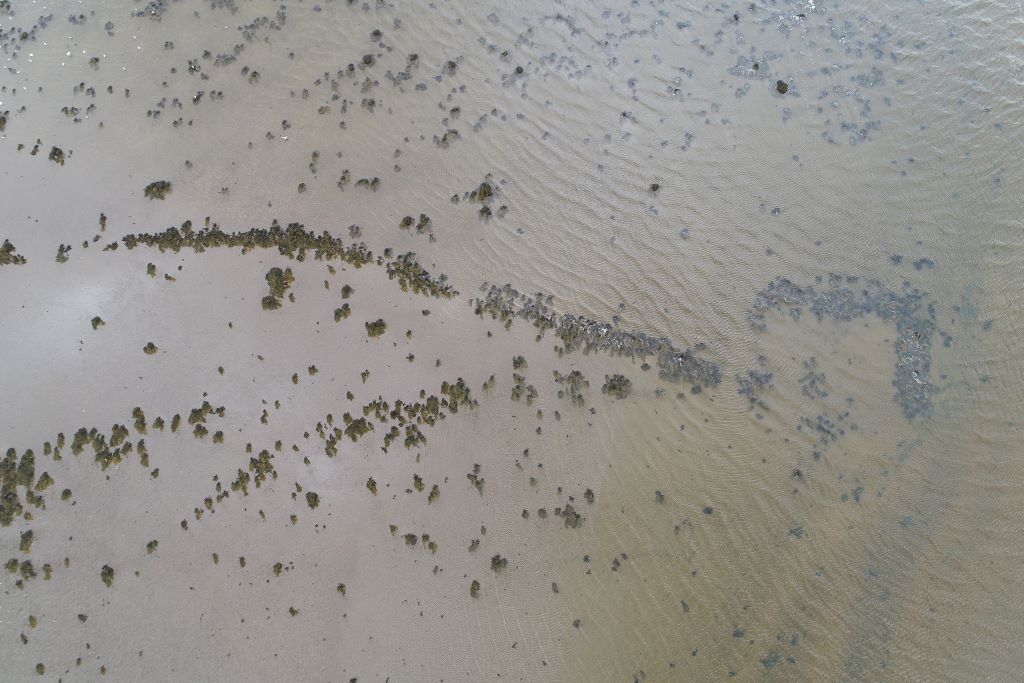 A fish trap to the east of Alturlie Point, at the mouth of Petty Bay, takes a different form to those seen at Brecknish, but it also has the box, where the unlucky fish were trapped as the tide flowed out of the firth. 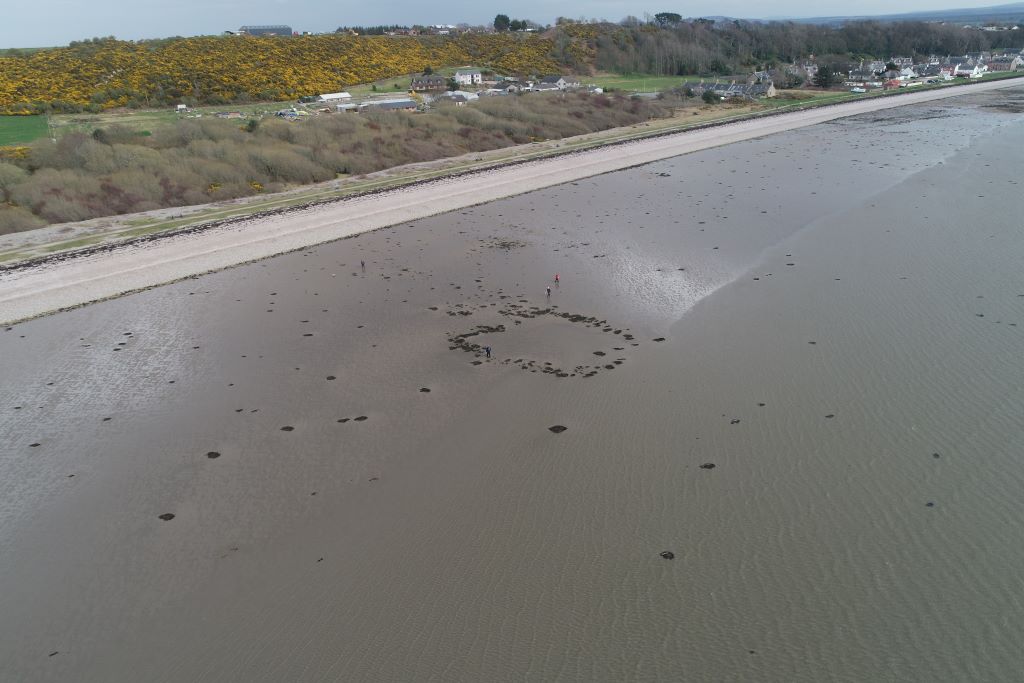 At Ardersier lies the remains of a squarish, or D-shaped, fish trap. The structure is constructed primarily of boulders but there are also several stumps of posts visible. This unusually shaped fish trap was excavated in 2001 (you can view the report here). 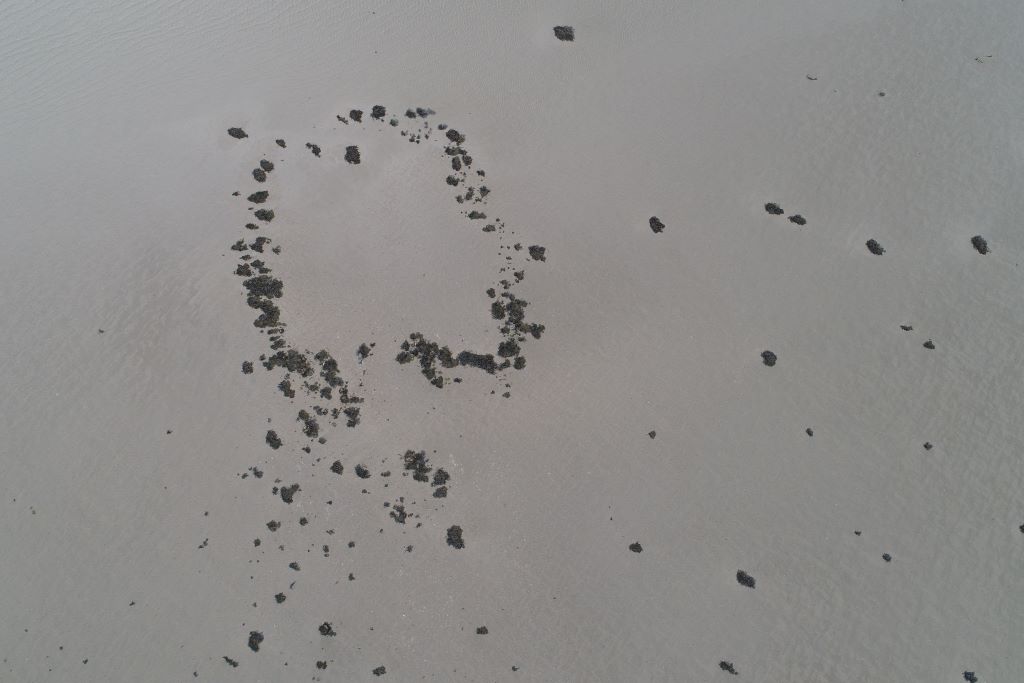 It’s possibly all that remains of a ‘box’. The leading walls having been washed away or constructed with nets or hurdles that don’t survive.

The wooden posts of stake nets are harder to spot from the air and often require some rummaging with a ranging rod to find them through the sprawl of seaweed. You can just about make out a post amongst the seaweed in the image below. 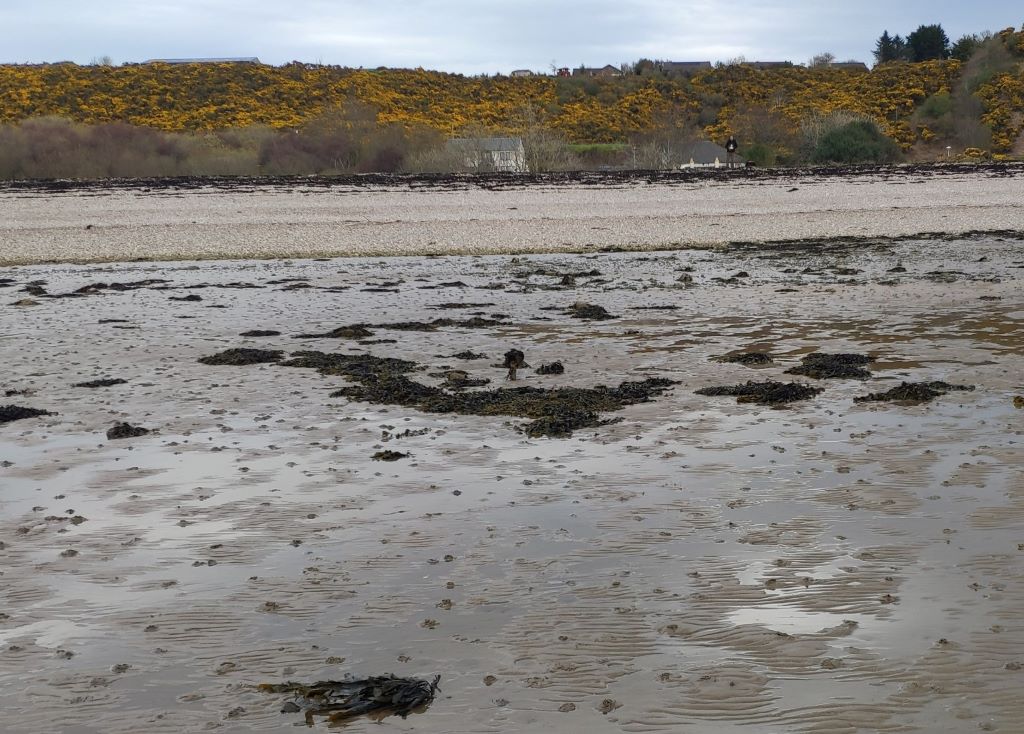 Also visible at low tide at Ardersier are the remains of an alignment of wooden stakes which sit proud of the sands by only a few centimetres. 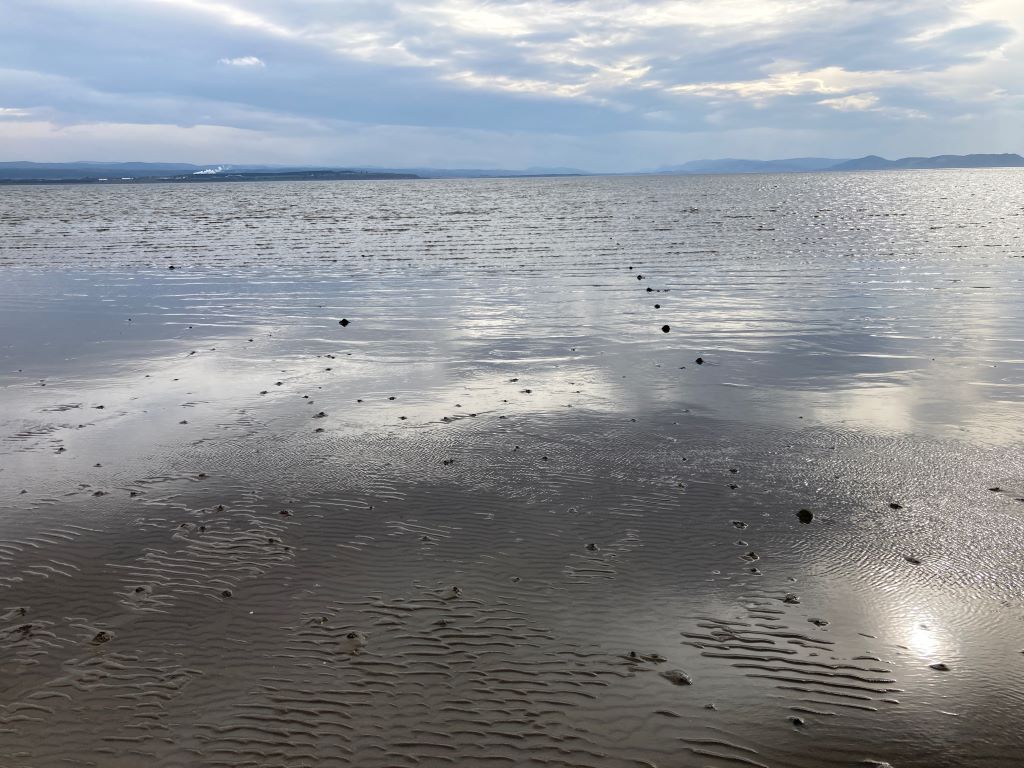 As our April fieldwork was drawing to an end, we crossed the border into Moray where we visited the Findhorn Heritage Ice House. Within the museum there is a detailed model of a stake net in operation. This is how many of the surveyed stake net sites would have looked in their full glory before they were abandoned and left to the mercy of the sea. 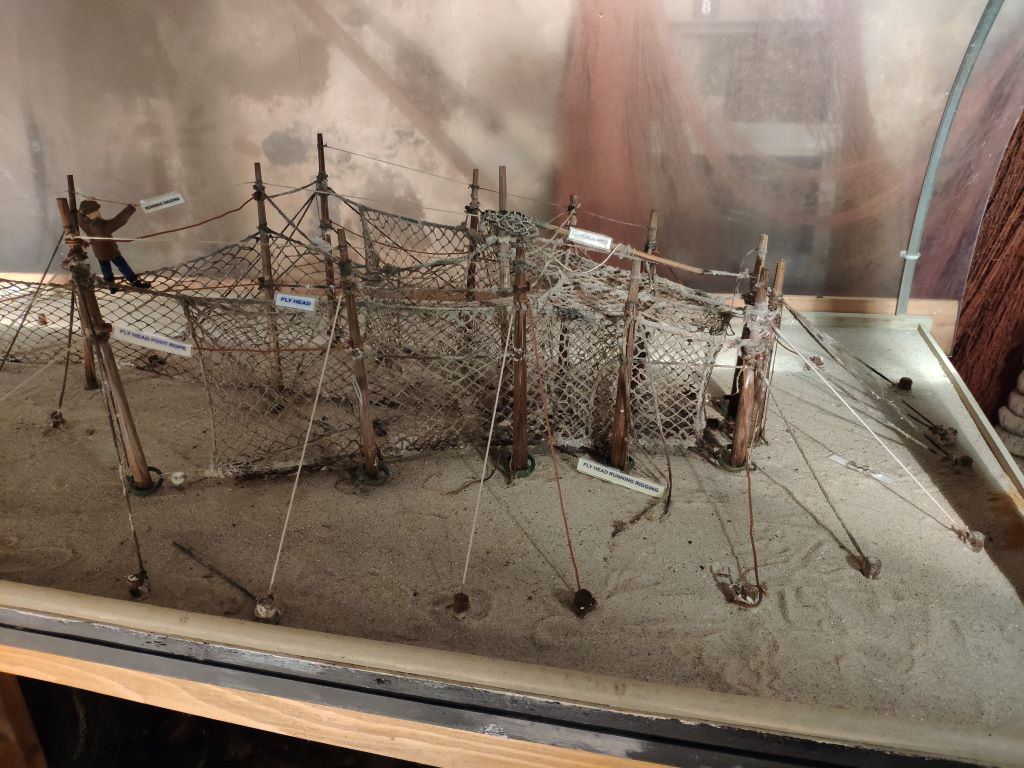 This stretch of coastline provided a fascinating insight into the past fishing industry along the Moray Firth.  You can check out these fish trap records in more detail, as well as the other sites we visited on the survey, on our sites at risk map.  If you would be keen to find out more about future surveys as we move around the coastline to Moray and Aberdeenshire, then take a look at our coastal heritage survey page for more details.