Wind, waves and eroding heritage on the Western Isles

The SCHARP team are all out and about on the Western Isles at the moment; Tom, Natalia and a small team of archaeologists are in North Uist, excavating an eroding peat shelf at Loch Paible with local volunteers from Access Archaeology, while Jo and Ellie are in Lewis, ShoreUPDATING with new project volunteers and exploring as much of the island’s spectacular coast as possible.

The machair which makes up long stretches of the coast of the Western Isles is particularly vulnerable to erosion, while these islands are exposed to the wildest waves and strongest winds from the North Atlantic on their west. This vulnerability is reflected in the concentration of high-priority sites at risk along these coasts. 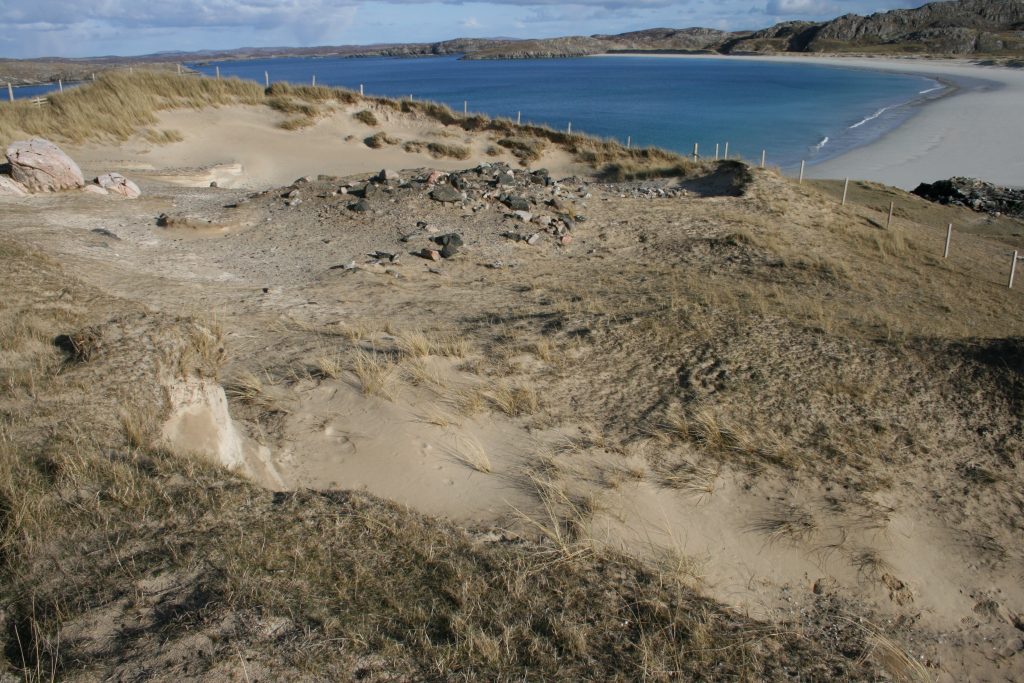 Local management of the multi-period burial ground at Cnip, is allowing the marram grass to advance helping to stabilise the area

We’ve been able to visit a few of these in the time we’ve had on Lewis. The dramatic stretch of white sand at Cnìp is the setting for remains stretching back thousands of years: a shell midden on a small outcrop of bedrock at the west end of the bay has been dated to the Mesolithic period, one of very few sites of the period on these islands, where rising seas have submerged much of the evidence of this time. In the machair above the bay, a prehistoric and Viking burial ground has been uncovered, and despite the constantly-shifting sands of this environment, the construction of a fence around the exposed area has helped to protect it, with marram grass slowly advancing across the sandy slopes helping to stabilise them.

Another high-priority site lies on the beach at Galson, where a settlement mound forms the coast edge. Here the eroded face shows the evidence of occupation; from prehistoric houses and burials to Viking remains, with metres of stratified structures visible in the sandy slope. 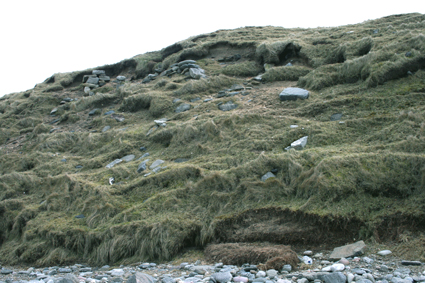 The settlement mound at Galson, with the remains of stone buildings visible in the face

The rocky coast around Garenin was the scene of our site visit with a group of volunteers, where we practiced ShoreUPDATE surveys, recording a promontory enclosure with the ruins of a dun, a sheep fank and the remains of a still.

With so much evidence of Scotland’s past along this wave- and windswept coast, local help will be essential to monitor sites and update records. We’ll be back in the summer to deliver training to coastal communities around the islands – and we’re already looking forward to our next visit. 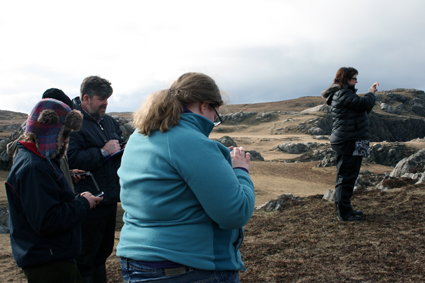 Volunteers doing a ShoreUpDATE survey of a promontory enclosure