Last month saw us return to Higgins Neuk for our third season of investigation. 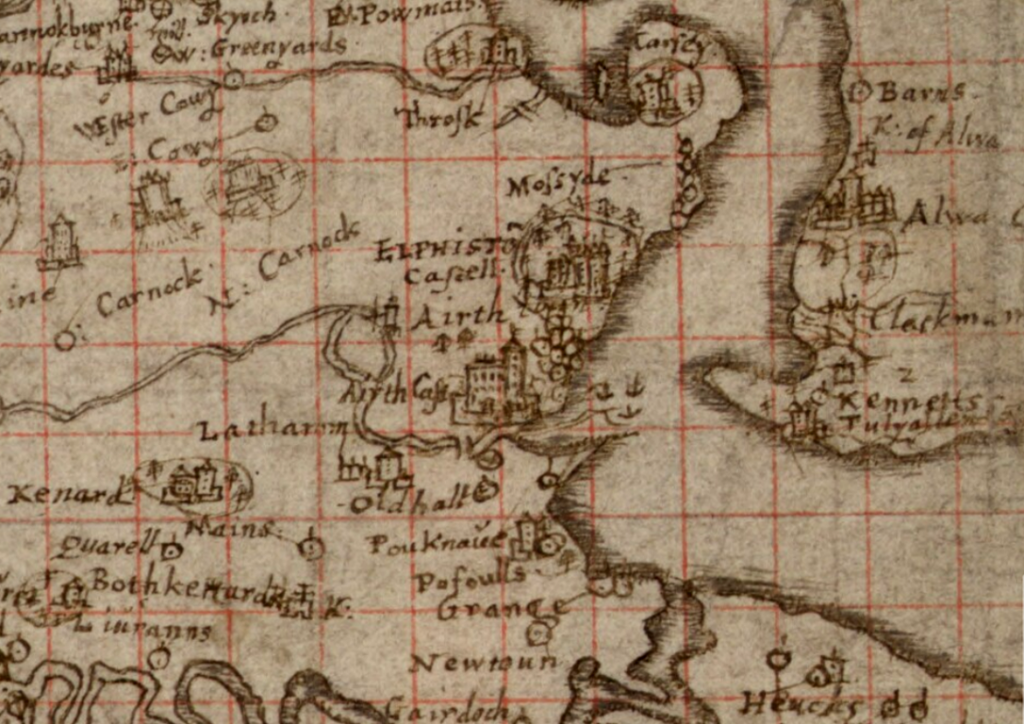 Pont’s map dates to around 50-60 years after the time of James’ dockyard and shows ships at the mouth of the Pow Burn. We are looking for the archaeological evidence of 16th century dockyards here. (Reproduced with the permission of the National Library of Scotland).

Building on 30 years of historical research by John Reid, we were on the hunt for Scotland’s 16th century royal dockyards. John has made a convincing case that the second of the two dockyards constructed by James IV for his navy lay at the mouth of the Pow Burn (read more about the history of the site, and John’s research on our last post). The next step was to find archaeological evidence of it.

In our search, we deployed a combination of techniques to help us understand the dynamic landscape here and how it has changed since the early 16th century. What did the river look like around 1500? When did the saltmarsh develop? Where was the mouth of the Pow Burn at that time? And where along the river here could a vessel the size of James’ flagship the Great Michael (allegedly the biggest ship in Northern Europe when she was launched in 1506) have been brought to the shore? 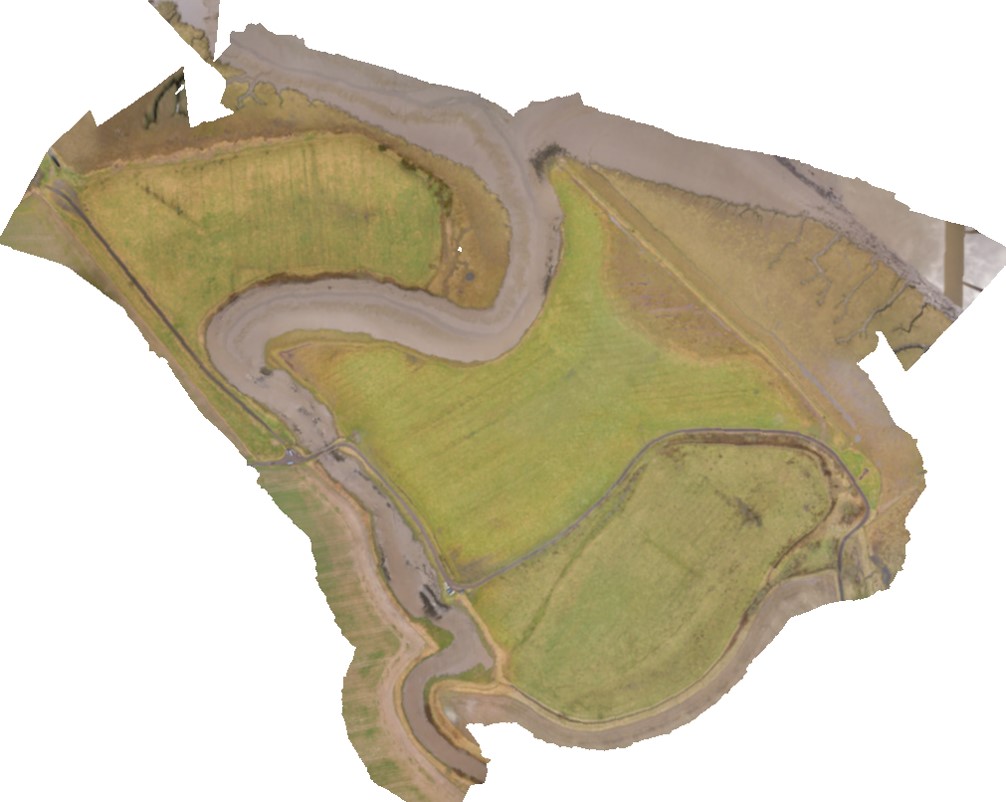 Photomosaic of the area at Higgins Neuk. Go to the gigapan website to explore the full-size version. Created by Eddie Martin. 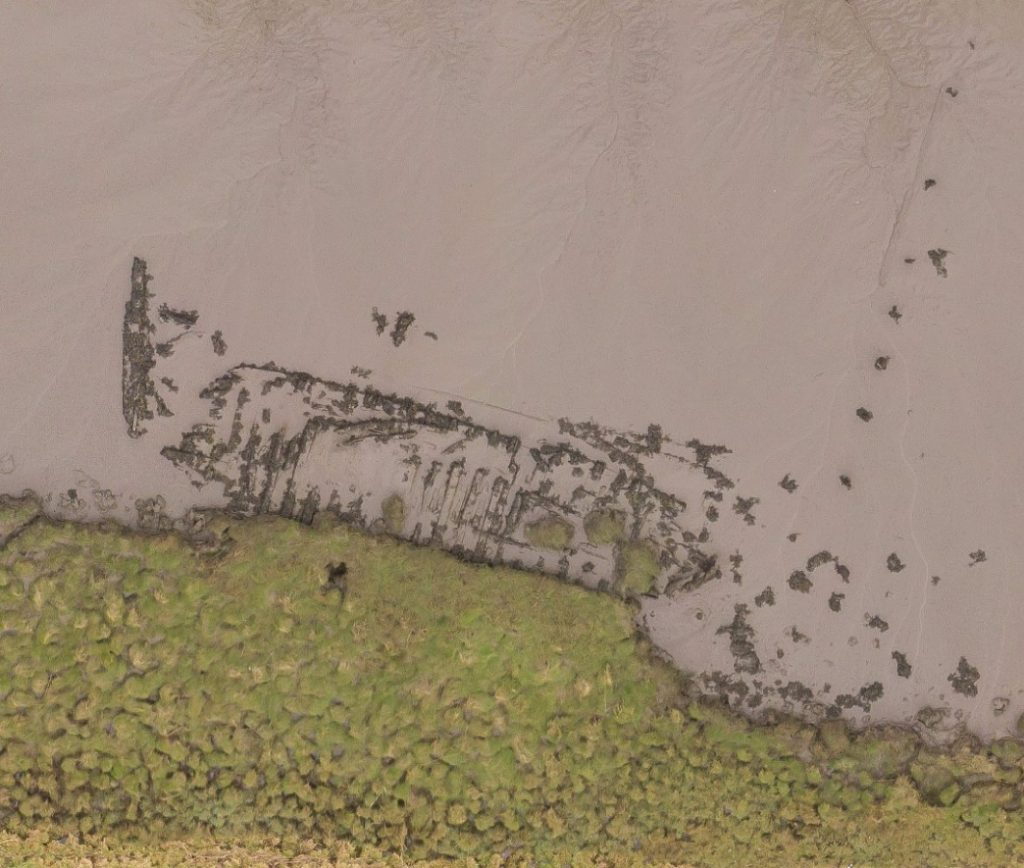 This wooden barge abandoned on the banks of the Pow Burn might be the old cattle ferry that once crossed from here to Kincardine.

Historical research, sediment coring and geophysical survey had pinpointed the likely location as a narrow strip of land on the banks of the Forth. Not only did we think that this was a likely spot to find evidence of the docks, but this little area also contained a wealth of other interesting features. From the 1600s, a series of mills once harnessed the power of the Pow Burn, and a ferry used to cross the river from here to Kincardine. A well-built stone sea wall enclosing this stretch of the riverbank shows significant investment in this area in the past.

An ‘Old Stone Pier’ is shown on a map of 1828, with an old wooden pier a little distance to the east. Although they were probably both associated with the ferry, we wondered how old the ‘Old’ stone pier was. Could it date from the time of James’s docks? 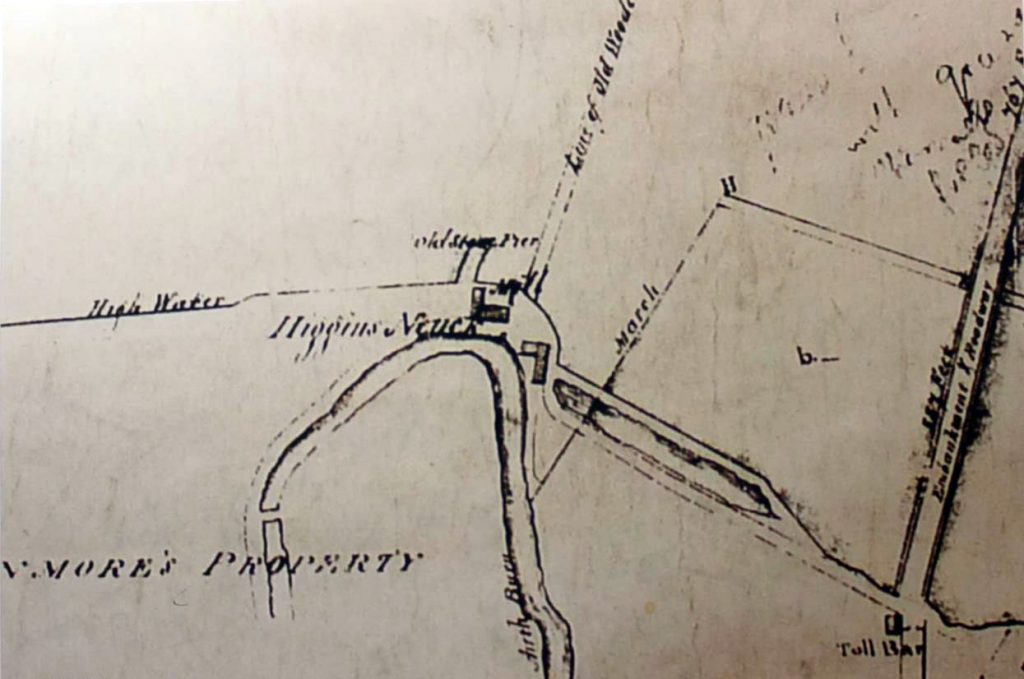 This map from 1828 shows an ‘Old Stone Pier’ in front of the area of land we’re interested in. 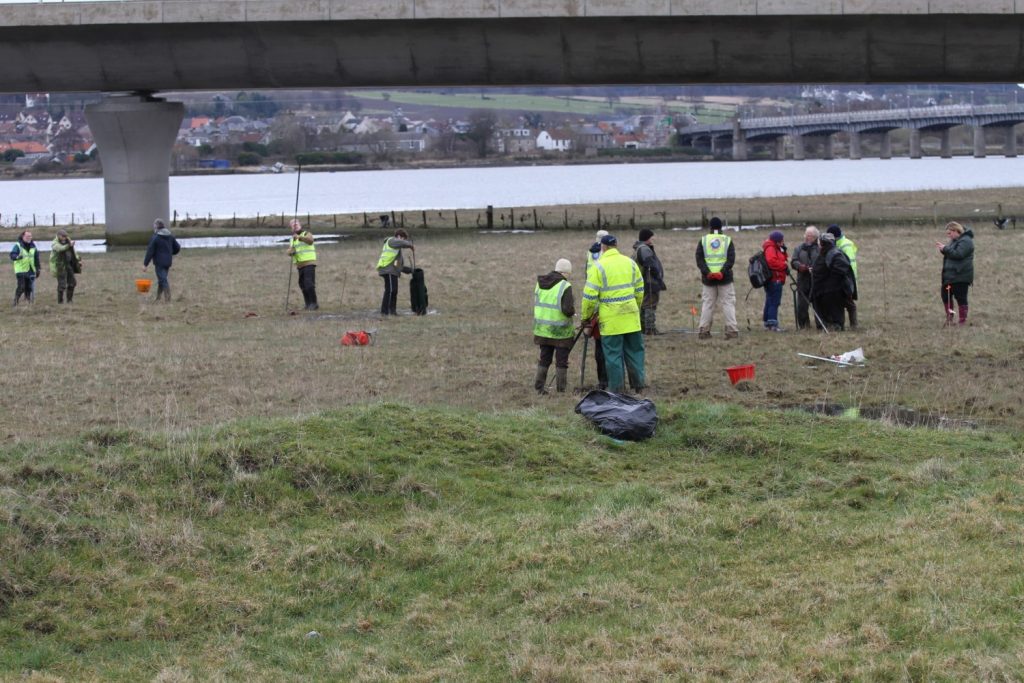 We cored a long line of boreholes in the saltmarsh along the line of the old stone pier marked on historic maps.

Our best chance of finding out was to get a better understanding of the structure and the sediments that had engulfed it. We did this in March through the coring survey. Buried just beneath the surface at the edge of the field, we traced the pier for around 35m into the saltmarsh gently sloping towards the river.

Peat samples recovered from three of these cores suggested that a land surface had formed on top of the stone structure after it had gone out of use. These were submitted for radiocarbon dating, and caused some confusion when the peat was shown to be Iron Age!

Diagram of the stone structure we found buried in the saltmarsh with our coring survey, running for almost 40m towards the river. The peat recovered from the top of it gave us Iron Age dates.

Rather than a post-medieval pier, were we looking at a prehistoric crannog? We had to investigate this area further.

After two weeks of digging, we could walk along a rutted cobble trackway leading down to the paved surface of the Old Stone Pier. 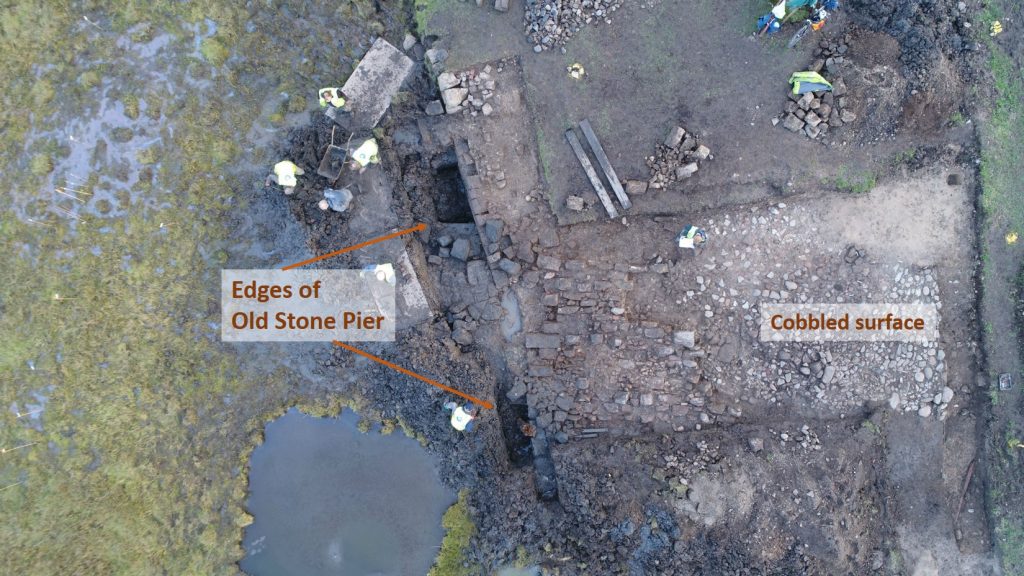 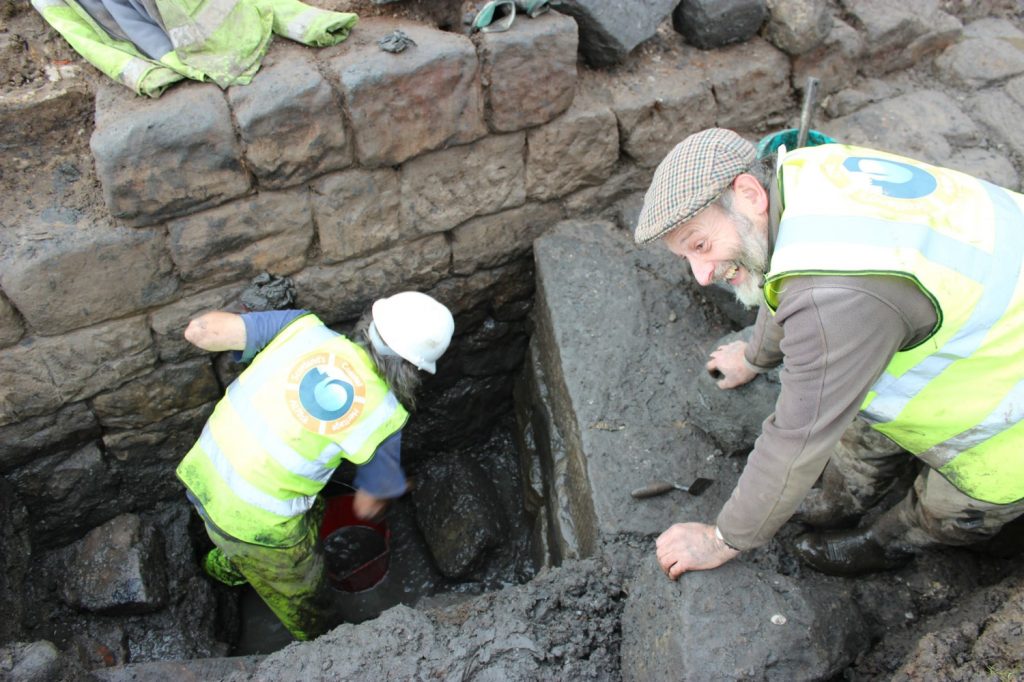 Geoff was delighted when we revealed the face of the old stone pier which was built up against the stone sea wall on top of a plank forming the foundations.

Our excavation also revealed that the sea wall forming the riverbank had originally been almost 3m high, and that the stone pier had been constructed against it. An unexpected discovery was the use of pine planks as a foundation course for the pier.

The waterlogged conditions in the saltmarsh meant that organic material was really well-preserved, including the wooden foundations of the old stone pier, and thick deposits of chaff which had been dumped over the sea wall by the miller.

Layers of chaff, presumably thrown over the sea wall when the mills were in use, show that the pier and the sea wall would originally have been freestanding structures. Despite the saltmarsh that’s accumulated here since then, the spring tides of early October demonstrated very clearly that this area is still intertidal. 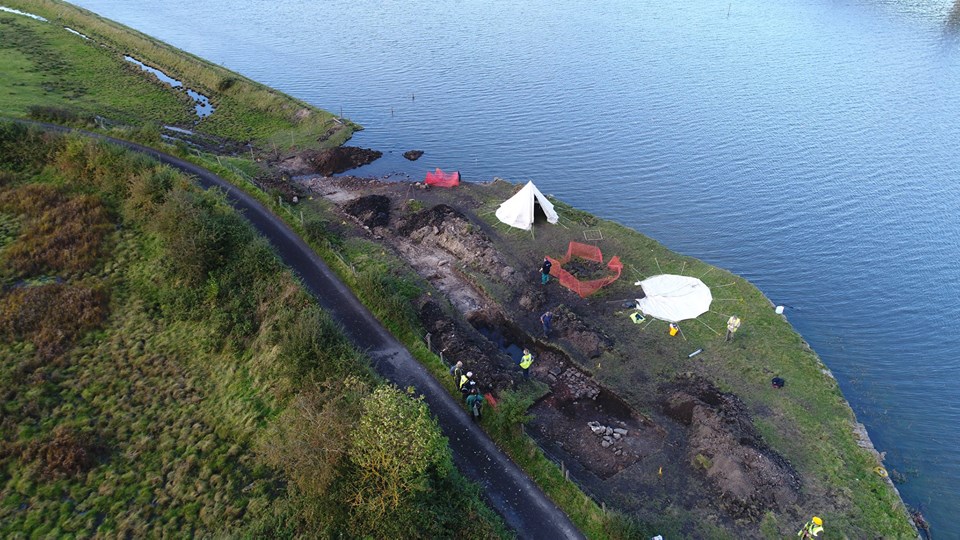 A drone photo during a very high tide. It flooded out one end of our trench, but definitely showed that there could once have been a harbour for big boats here!

So how do we account for Iron Age peat on top of the pier? The most likely explanation is that it was earlier material redeposited on top of the later structure. We know that during the 18th century drainage of Stirling Carse, peat drifted down the estuary and covered the banks of the Forth. Letham Moss, just upstream on the Pow Burn is also recorded as having burst in the early 17th century and dumped peat on surrounding land, so it’s possible that the samples we recovered came from one of these sources.

At the other end of the site, the archaeology was proving to be all about the mills. 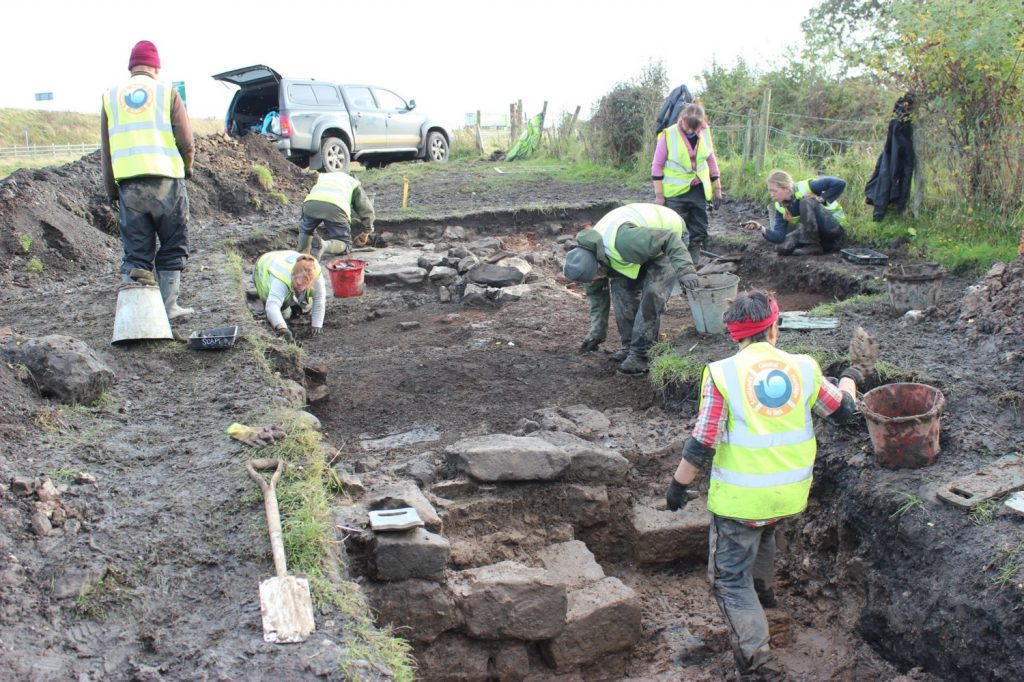 Some of the team uncovering features associated with the watermill at the other end of the site.

A channel that we’d initially thought was a small outflow for a mill-lade was actually an old channel of the Pow Burn itself, which has been deliberately narrowed with the construction of a stone wall. We also found the timber and iron remains of a mechanism – the function of which is not yet clear. Possibly part of the housing for a waterwheel, or a setting relating to the operation of a sluice gate?

An overhead view of the channel from the drone. 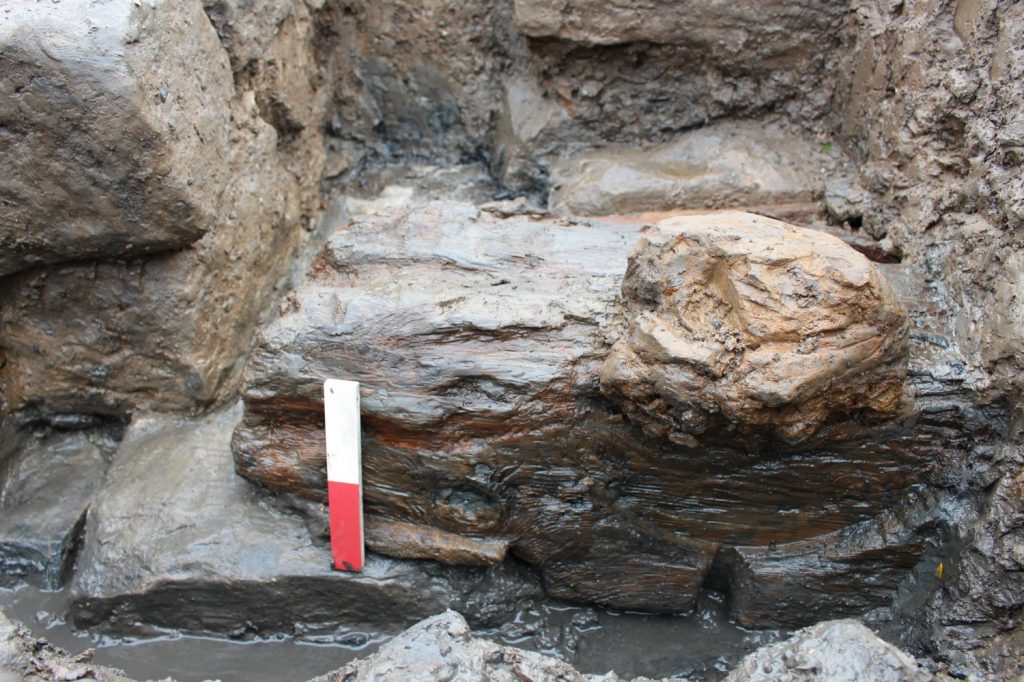 This timber structure sits in a recess in the wall at the edge of the channel. With a carved semi-circular inset, grooves and an iron fastening, it might have been part of the mill wheel mechanism, or operated a sluice gate to control the flow of water.

On the side of the channel, an area of burning resolved into these fine remains of a corn drying kiln which must have been related to the mill.

A flue with a fire grate still sitting on top of it lay underneath a collapsed structure full of malting bricks. These tiles, perforated with tiny holes to allow hot air from the fire to circulate, would have formed the drying floor of the kiln. 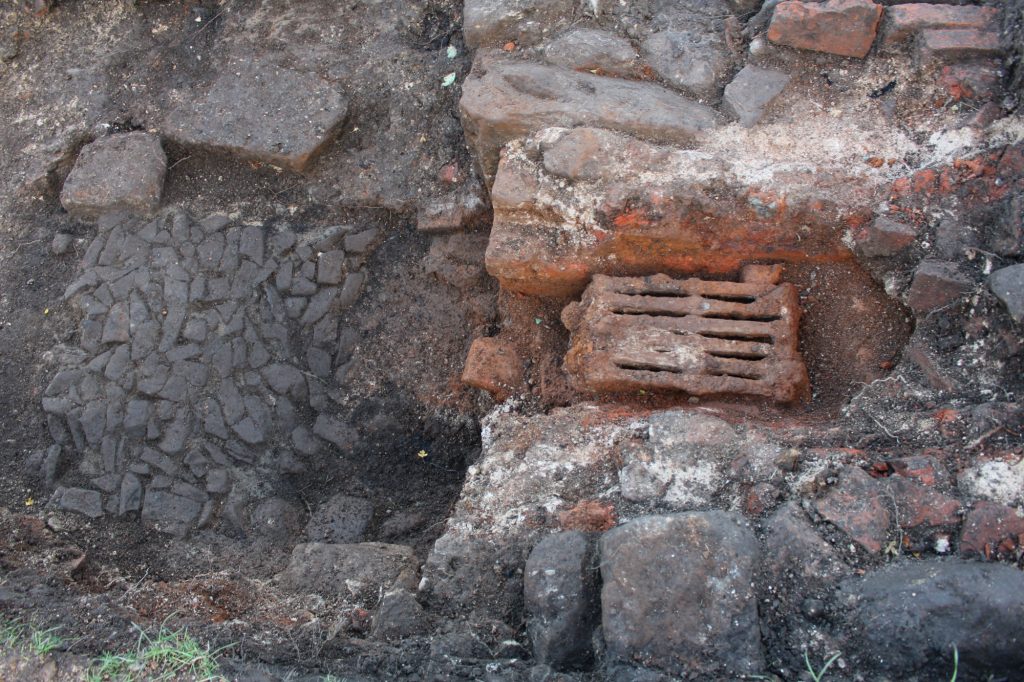 The fire setting and flue for a corn drying kiln, where grain would have been dried before grinding. 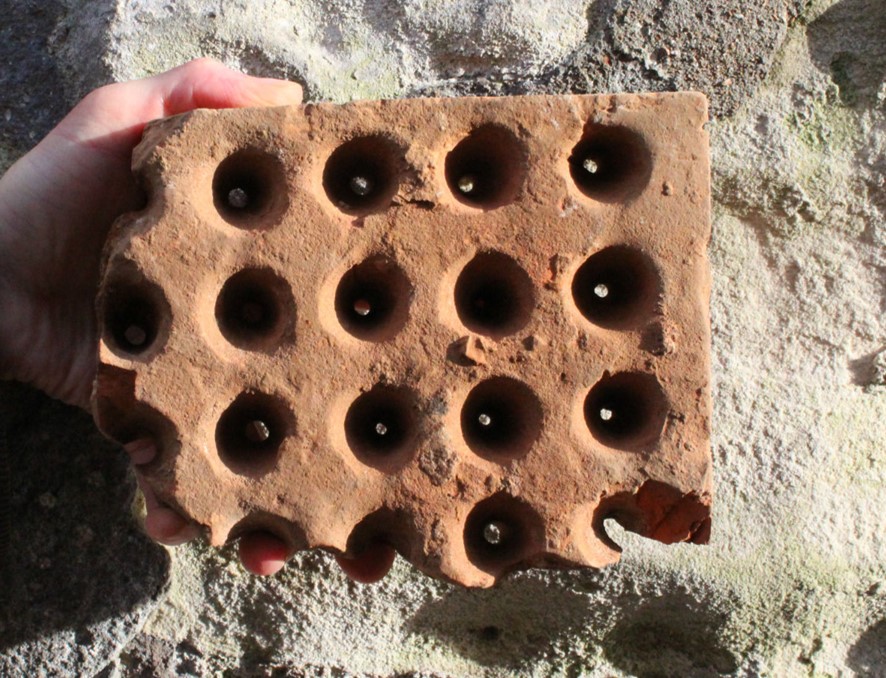 One of the tiles that would have formed the drying floor of our kiln. The small holes allowed the warm air from the fire underneath to circulate and dry the grain.

So did we find the lost royal dockyards of James IV? Well, we found evidence of some very significant waterfront structures on the river here, which hint at the importance of the site. A lot of effort was put into building the sea wall and the pier, and we now know that the saltmarsh developed after the period when James was building his navy, so it’s possible that this site could have been used for the great ships of his time. Analysis of the finds and samples recovered will help date some of the structures we revealed. We haven’t found definitive proof that the earliest ships of Scotland’s Royal Navy were built here, but we have revealed some brilliant archaeology along the way – and there is still a way to go yet. 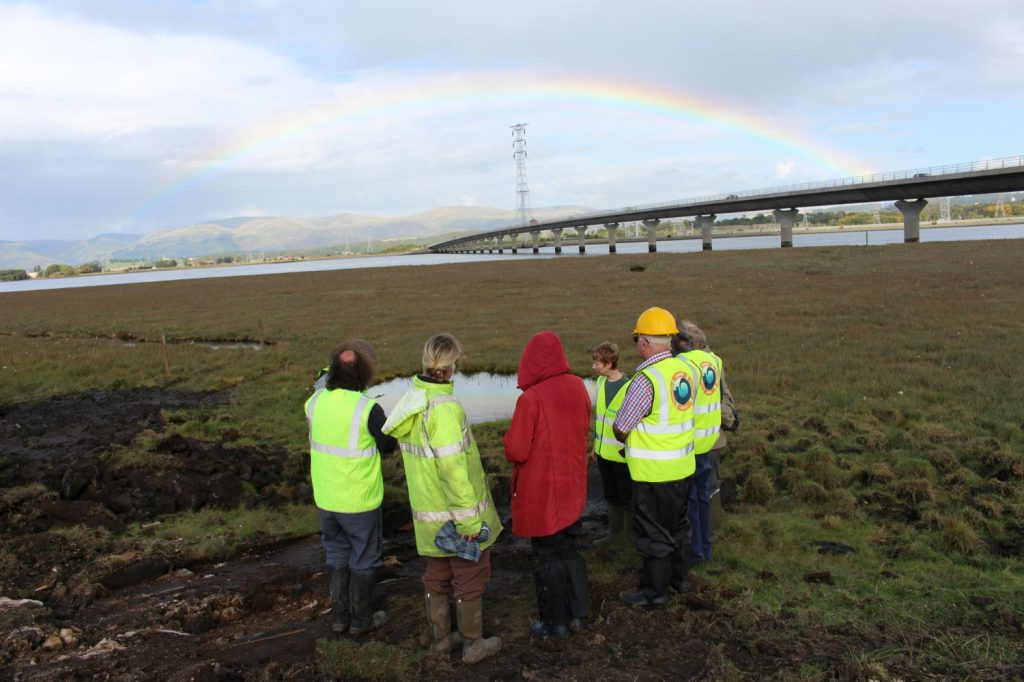 No treasure at the end of the rainbow at Higgins Neuk, but a very interesting site.