The next generation of Eyemouth explorers

The fort at Eyemouth changed the course of history, and not just that of Scotland, it played a significant role in the relationships between Scotland, England and France. Beginning life as an English fortification, it may have been the first Trace Italienne fort in Britain, reflecting the recent developments in warfare with the introduction of canons and gunpowder, which rendered stone walls very vulnerable. The huge earth banks you can still see today were far more effective at withstanding attack from canons, as they could absorb the impact of the cannon balls. 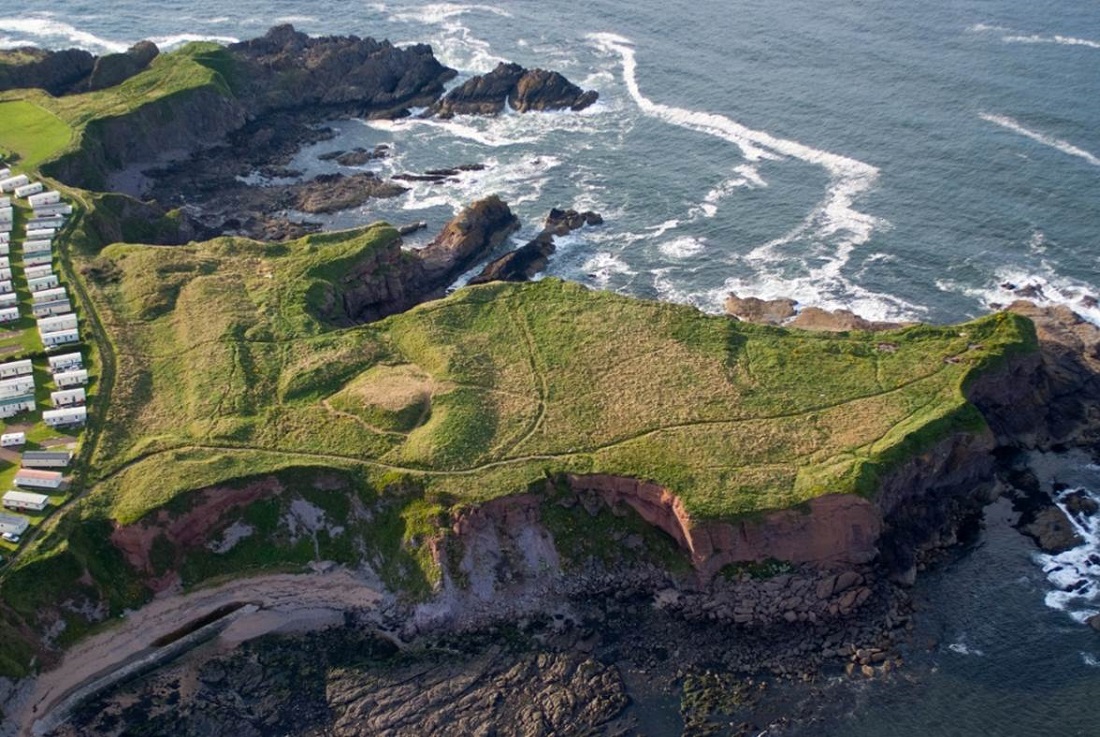 Built by Henry VIII as part of the rough wooing, the fort was used as a base from which the English armies harried Scottish settlements. The massive bank and diamond-shaped mound built at this time enclosed much of the promontory and survive to a significant height. The fort was abandoned following the treaty of Boulogne, but tensions between England and France continued, and the fort was soon re-occupied by the French as part of their alliance with Scotland. The defenses were strengthened and rebuilt, and survive as the outer bank across the promontory. This phase too was short-lived,  and the buildings were demolished, leaving only the substantial earthworks built by the two different armies as a tangible reminder of the fraught relationship between Scotland and England, and its impact on the landscape here, so close to the oft-disputed border.

Although the fort is internationally significant, it is little understood or appreciated, and is facing considerable threat from the sea, as wave action undermines the soft cliffs on which the fort was built. The people of Eyemouth and the Community Council want  to help raise awareness of the site by providing lots of opportunities for local residents to get involved in its investigation and interpretation.

One of our first activities involved Eyemouth primary school. In March, five classes got the chance to explore our interactive virtual reconstruction of Eyemouth Fort which shows the fort as it would have been when it was occupied by the French army in the middle of the 16th century. 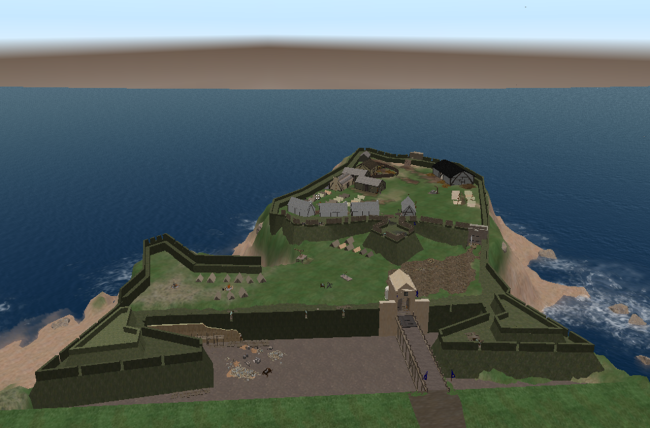 They had a lot of fun learning about life in the fort and exploring the different buildings; seeing the types of food the soldiers ate in the kitchens, visiting the animals, and firing the cannons on ramparts accompanied by clouds of smoke and echoing blasts; we could almost smell the gunpowder. 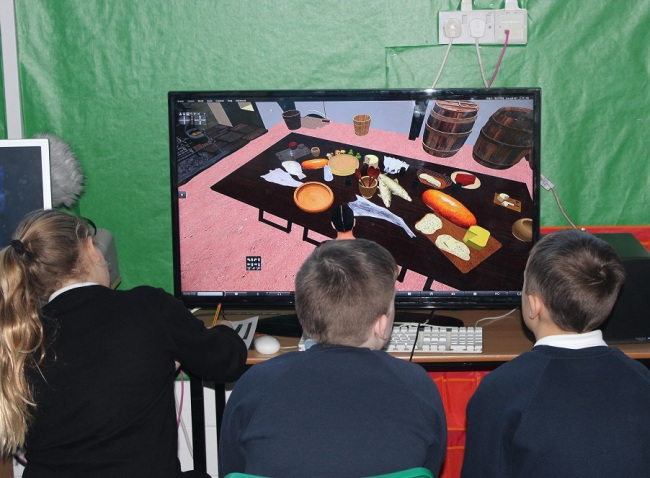 Enthusiasm was also evident during the evening’s talks at the Community Centre, where more than a hundred people came along to hear experts talk about their research into the fort. First Bess Rhodes from the University of St Andrews spoke about the discoveries she’s made about the fort in the historical papers; the name of the spy who infiltrated the fort to produce a map complete with detailed measurements of the formidable defences, the food that was sent from around Scotland to feed the soldiers and the attacks made on Eyemouth during the French occupation, before concluding with the fort’s demolition following the treaty of Cateau-Cambrésis. 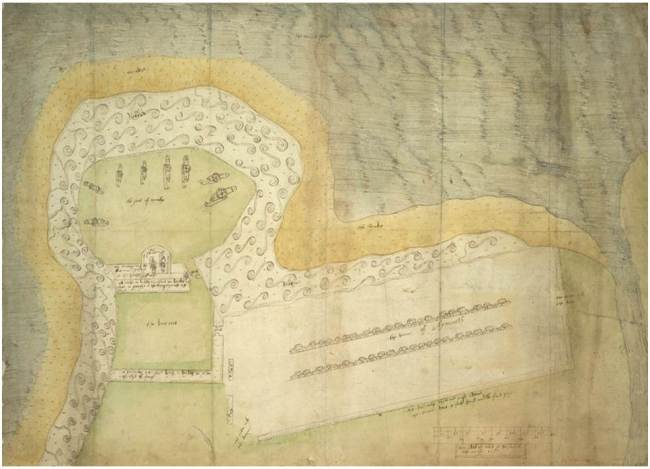 After Bess set the historical scene, David Caldwell spoke about his archaeological excavations at the fort in the 1980s. David told us about some of the finds made during the dig – a tassel from a uniform, French and English coins, a cannon ball, pottery from the cups and bowls the soldiers used and plenty of evidence about the construction of the fort itself. Although some of the rampart had been faced in stone, this hadn’t been completed by the time the treaty forced the French army to flatten and abandon their fort. Despite being unfinished, the bank and ditch would have been a daunting obstacle to any attacking army; beneath the traces of the impressive earthworks that we see on the promontory today, David discovered the remains of a deep, steep-sided ditch which was deliberately filled in when the departing army dug away the high bank to flatten the impressive but short-lived fort. 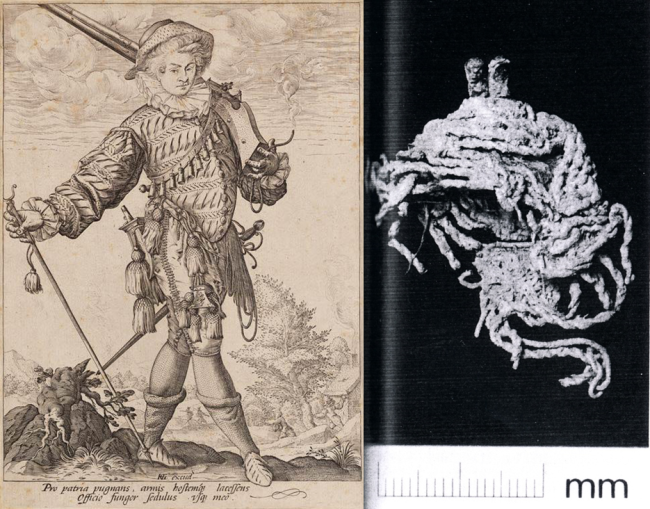 The tassel David discovered at the fort, and an engraving of a sixteenth century Arquebusier in a tasselled uniform

With our heads still buzzing with the wealth of information Bess and David had imparted, it was time to put their findings to use during Saturday afternoon’s workshop with the Friends of the Fort and Eyemouth Museum. We explored our model of the fort in the light of our newly-acquired knowledge, thinking about how to make the reconstruction as accurate and informative as possible as well as good fun for visitors once the model’s installed in the museum.

It wasn’t just the primary school pupils who got to learn about Eyemouth Fort; on Monday we spent a day with maths students from the High School. They started off learning about the history of the fort by exploring the model before visiting the site to explore the remains for real. After getting our bearings it was time to get to work recording the profile of the defences using a level and staff. 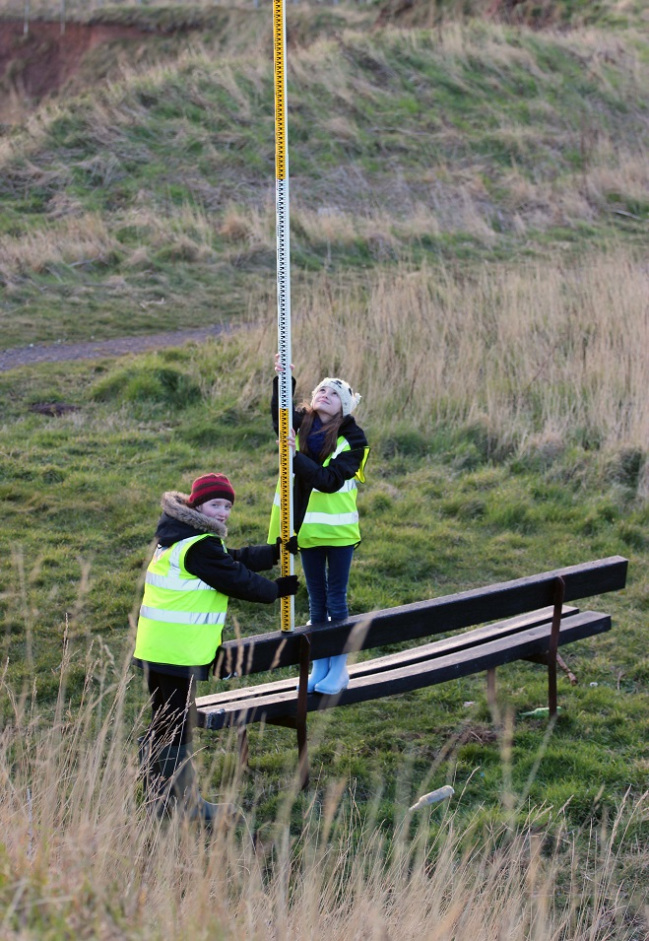 High School pupils surveying the earthworks on the fort

Once back indoors and warmed up, we draw up our results using Excel, creating graphs from our measurements. This was when the pupils turned the tables on us by demonstrating their far better knowledge of computing, tweaking the colours and effects on the graphs to create impressive profiles which show the shape of the surviving earthworks.

Once again, we’ve had a lovely time in Eyemouth, seeing old friends and making new ones. Thank you to everyone who took part trying out the model or came along to the talks, we look forward to seeing you again soon.