Amongst the mud punts and the schooners at Newshot Island was one very unusual looking boat. Made of metal, the vessel, when seen from above, had a distinctive chamber at the back (to get a better view, click here and zoom in on Eddie Martin’s aerial image). 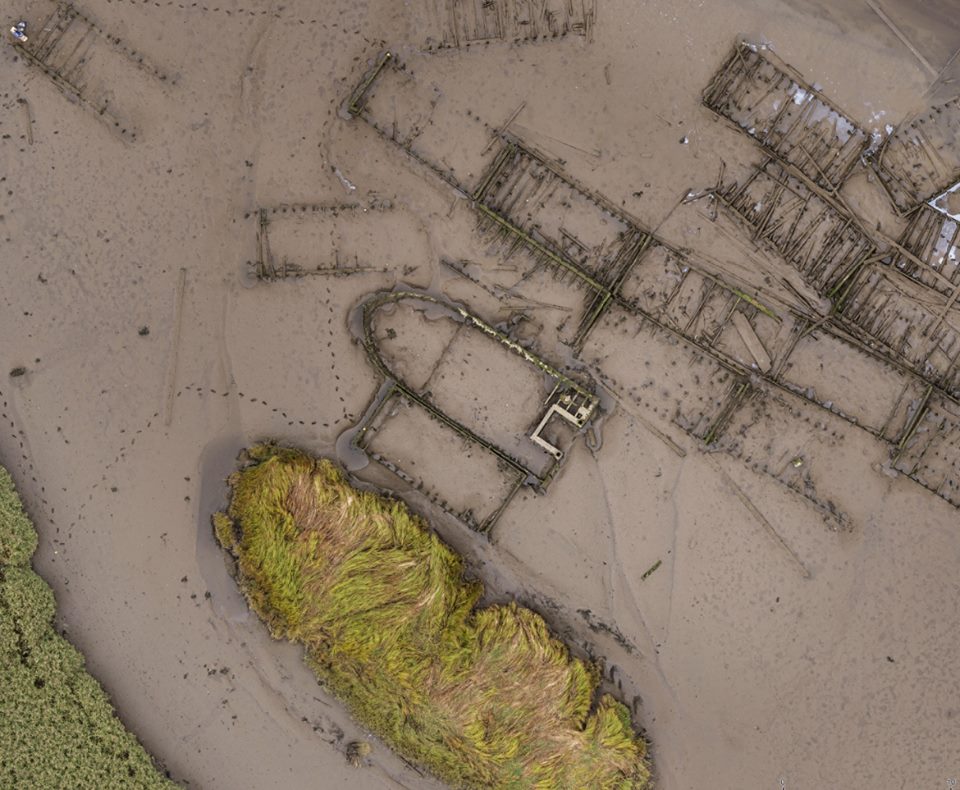 A boat with a distinctive chamber at the back, surrounded by mud punts.

The Clyde is a wide and shallow river, and dredging was a vital operation needed to keep the shipping lanes open. We knew that the mud punts were used for transporting mud dredged from the river bed and our ShoreDIG and NAS fieldwork had concentrated on recording several of these vessels. 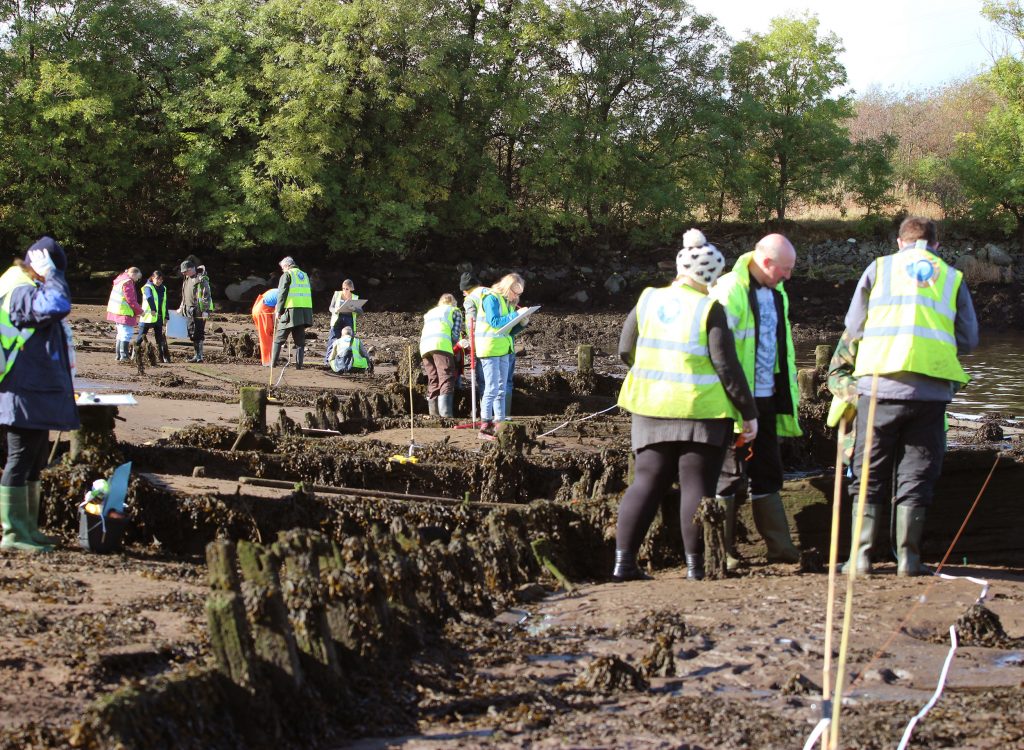 The mud punts were basic rectangular barges which could be tied together. Mud was piled onto the flat deck and the barges were towed downstream where the spoil was shoveled off. During the ShoreDIG fieldwork, we’d been told that the mud was originally used to extend the land out into the river (thereby making the channel narrower and deeper), but in later years was dumped out to sea. Dredging was done either using a floating grab crane or by specialised dredgers. Old photographs exist of dredging in operation, including within the Mitchell Library’s online resource of photos of the Clyde. 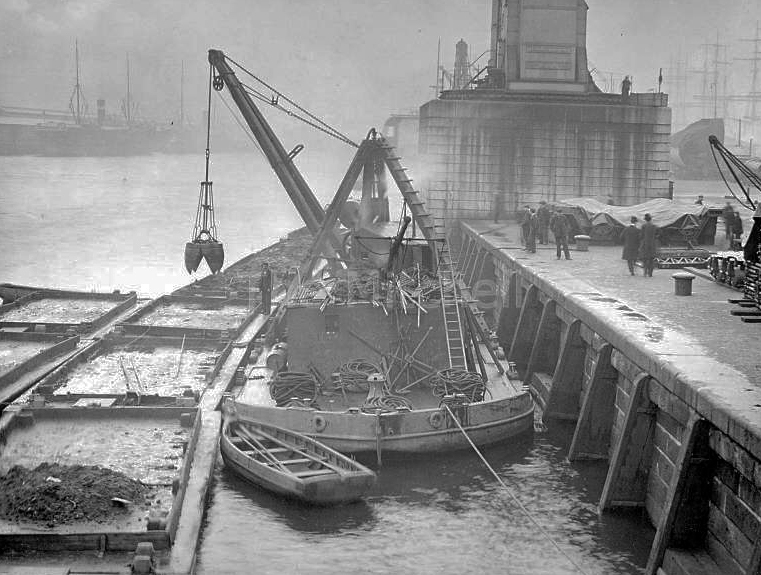 The proximity of the boat with the distinctive shape to the mud punts led to ideas that she might be a dredger.

However, this was not the case, and detective work by local resident Ian revealed that the boat was something far more unusual. While looking into records about the Newshot ship graveyard at local archives, he had found some old plans of a vessel that looked familiar.

The drawings, dating to 1852, had been drawn by shipbuilders A and J Inglis and showed a design for a diving bell barge, used to lower divers into the river in a diving bell attached to a large chain. Not only did the Newshot boat look almost identical in plan, an elevation drawing looked very similar to the remains embedded in the mud.

Elevation of a diving bell barge, drawn in 1852. 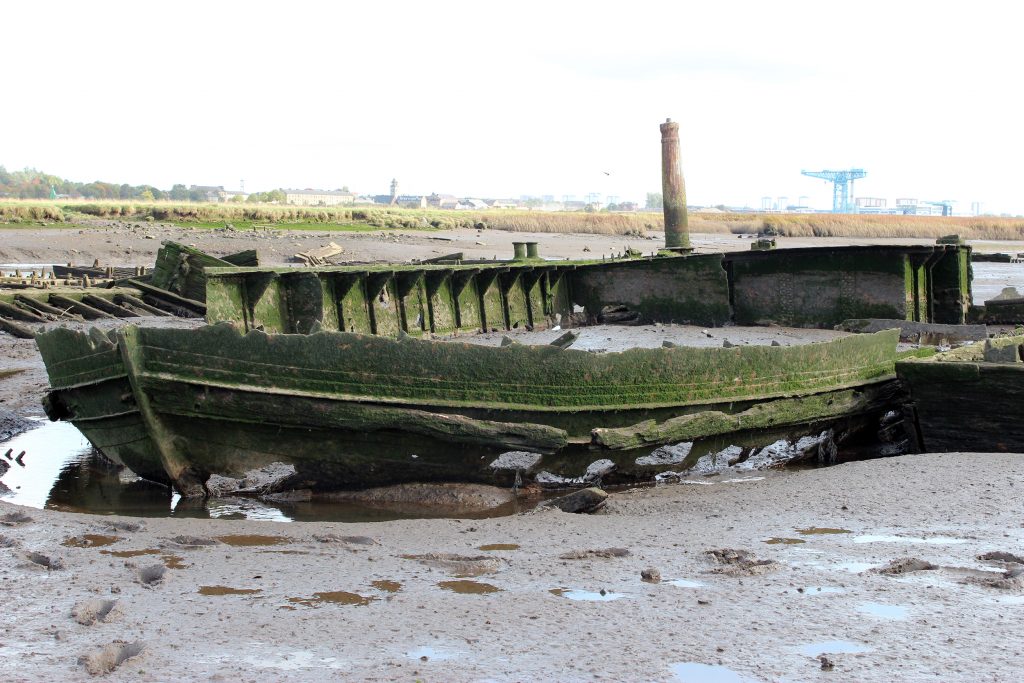 This was a fantastic discovery, and the diving bell barge is possibly one of the oldest that survives (if you know of any others, please leave a comment or get in touch with us). The design and construction of diving bell barges was one of the innovations of Clyde shipbuilding, and the Wonder Book of Knowledge, first copyright in 1917, included a Diving Bell and Barge as one of their marvels of industry and invention.

Description of a diving bell barge on the Clyde, from the Wonder Book of Knowledge

Even better, Ian was able to find a photograph of the diving bell barge, with a large winch in the centre for lowering the rectangular diving bell, and a grab crane at the side. Tied to the side of the diving platform is a mud punt with a man standing on it and a dinghy is tied next to the punt. 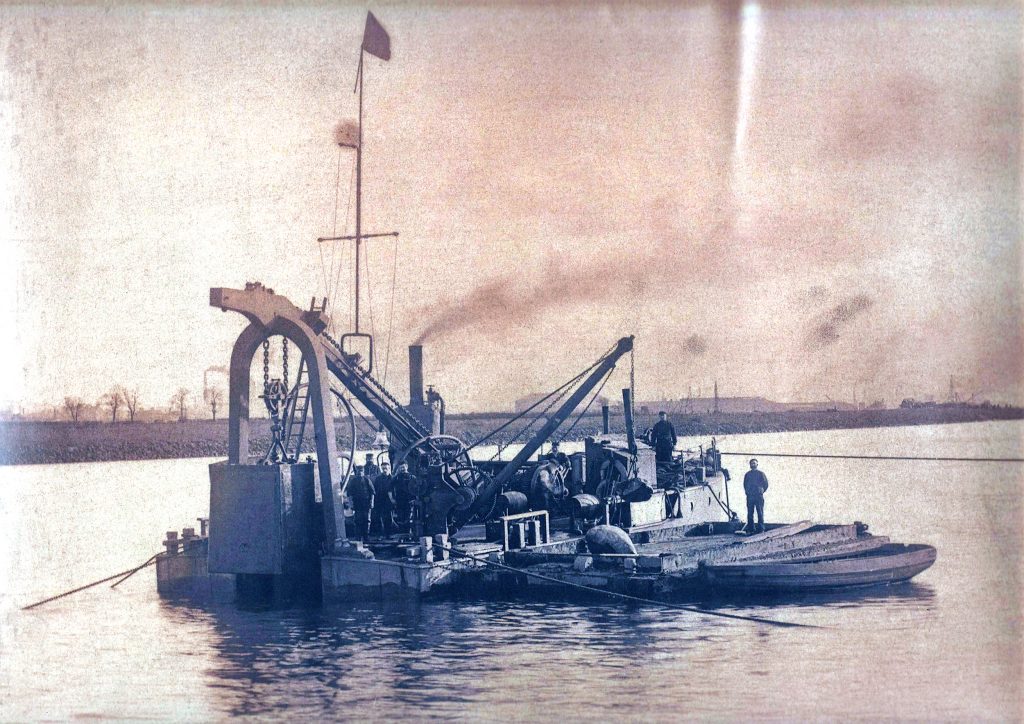 The grab crane in the photo is very similar to that shown on the A and J Inglis design, and an internet search showed that another similar crane survives at the Bennett Brook Railway, near Perth in Australia. 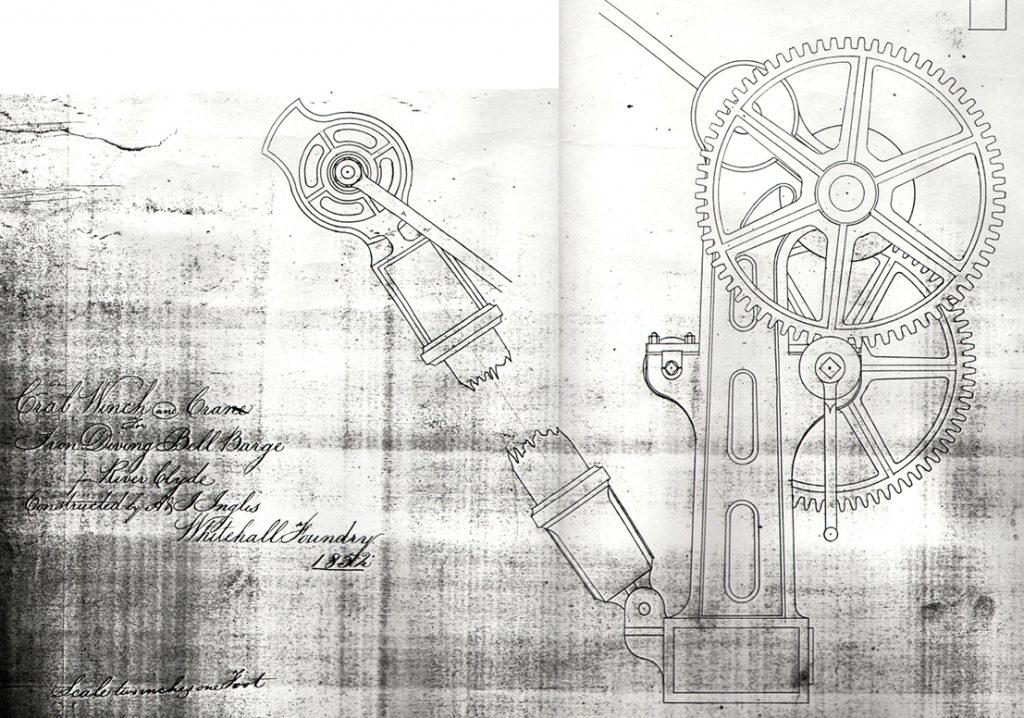 The crane shown on the plan – the text says “Grab winch and crane, from Diving Bell Barge River Clyde, constructed by A and J Inglis, Whitehall Foundry, 1852” 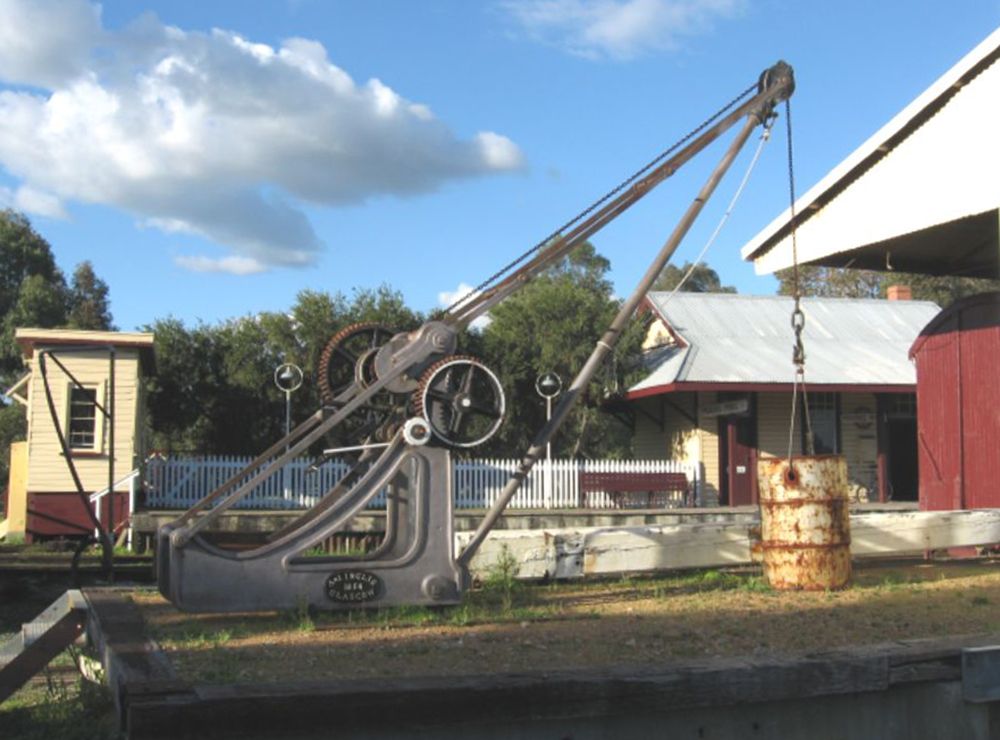 An A and J Inglis crane at the Bennett Brook Railway, Western Australia

There was one final question to be answered – why were the mud punts and diving bell barge abandoned in the creek near to the burned schooners? Looking at them today, many of the mud punts still appear to have been tied together, as if waiting for someone to come and collect them. This did not seem to be the haphazard dumping of individual barges over a prolonged period, but something much more organised. 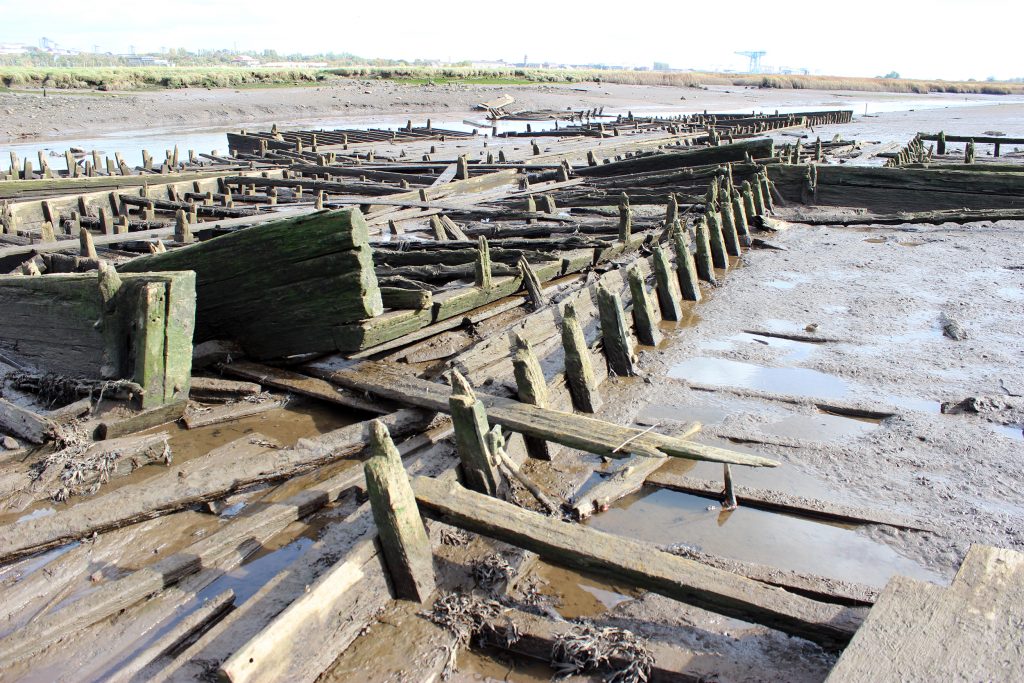 The mud punts at Newshot are still in orderly rows, despite decades of being submerged by high tides.

The answer to their abandonment is possibly found in a search of old maps on the National Library of Scotland website. Although nothing is shown opposite Newshot Island on the First Edition Ordnance Survey map of 1864, the Second Edition map reveals that a Dredger Works had been constructed on the north bank of the Clyde by the time the area was surveyed in 1896. 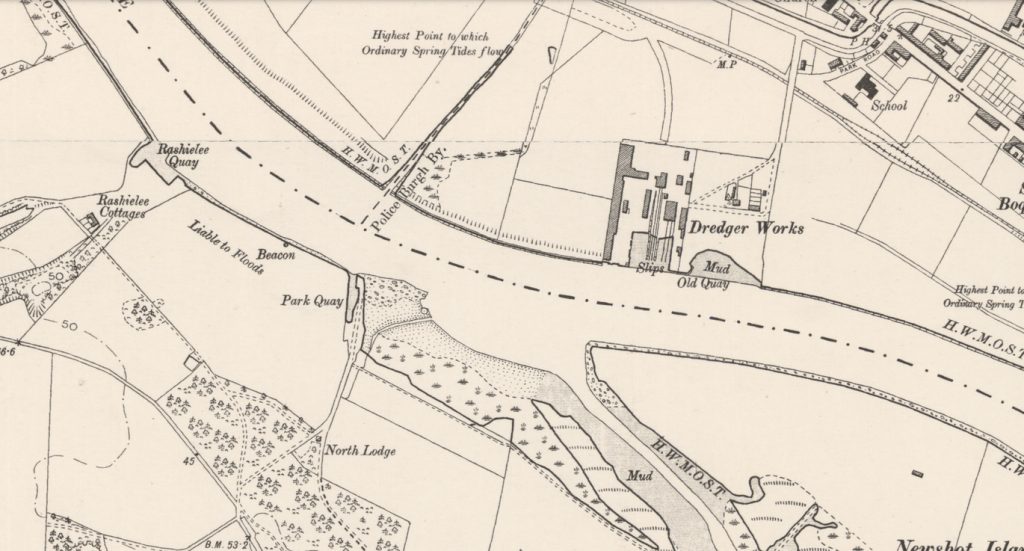 Second Edition Ordnance Survey map, showing the Dredger Works on the north bank of the Clyde

The Dredger Works would have needed somewhere to moor its boats and barges, and rather than block the main shipping channel of the Clyde, it seems highly likely that the creek around Newshot Island would have been a convenient place to store the vessels when they were not being used. Once the dredging of the river became more mechanised, and new, larger ships were built to clear debris from the river bed, it appears that the mud punts were simply left where they’d been moored.

We’ll be going back to Newshot to continue the survey work next year, but in the meantime, if you have any information about the Newshot ship graveyard, please get in touch by emailing info@scharp.co.uk.