The Last of the Embo Zulus

It started with a flood of ShoreUPDATE records submitted by the North of Scotland Archaeology Society (NoSAS). At the end of a bitterly cold ShoreUPDATE survey last February, NoSAS members walking across the muddy sands of Loch Fleet at low tide stumbled upon timbers and mounds of stone strewn across the intertidal area of the loch just beyond Skelbo. They recognised them as the remains of boats and ballast, and as the light faded, they photographed and recorded the position of at least 16 separate vessels across a 300m area. There was no reference to the wrecks on Canmore, Scotland’s National Monuments Record. However, on Highland Council’s Historic Environment Record an article by Richard Easson of Tain in the Northern Times in 1995 mentioned 12 boats including a large winch, found close to Skelbo. The author had been told that these were the remains of the Embo fishing fleet, which after the war (1914-18 I presume) due to so many not returning and the migration of the herring that the boats constituting the fleet were taken round to loch Fleet and burned.

Well there was no question that we had to investigate this story further and make a detailed record of the Loch Fleet boats before they deteriorated into an unrecognisable state. The first thing we did was to ask for help from the local community, to track down the origins of the end of the Embo fishing fleet story and from maritime archaeology specialists from the Nautical Archaeology Society (NAS), who could help us identify the types and ages of the vessels we had in Loch Fleet. 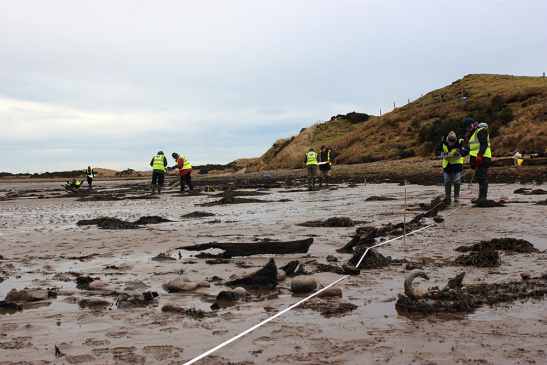 This all came together over the weekend of the 8th and 9th February, almost exactly a year after the NoSAS’s original ShoreUPDATE survey. Fifteen volunteers from NoSAS and the NAS spent the weekend making a detailed record of each of the wrecks comprising a 1:20 plan, a photographic record and a description. 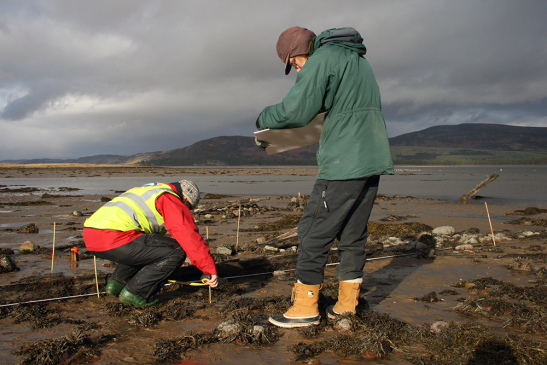 The remains are drawn in great detail at a scale of 1:20

Steve from the NAS was on hand to explain about futtocks and knees and floors. We identified at least 19 wrecks of wooden Zulu type fishing vessels ranging in size from around 10m up to around 18m in length. Zulus were a hybrid sailing boat with a straight stem and raking stern designed for speed and strength, introduced in 1879. 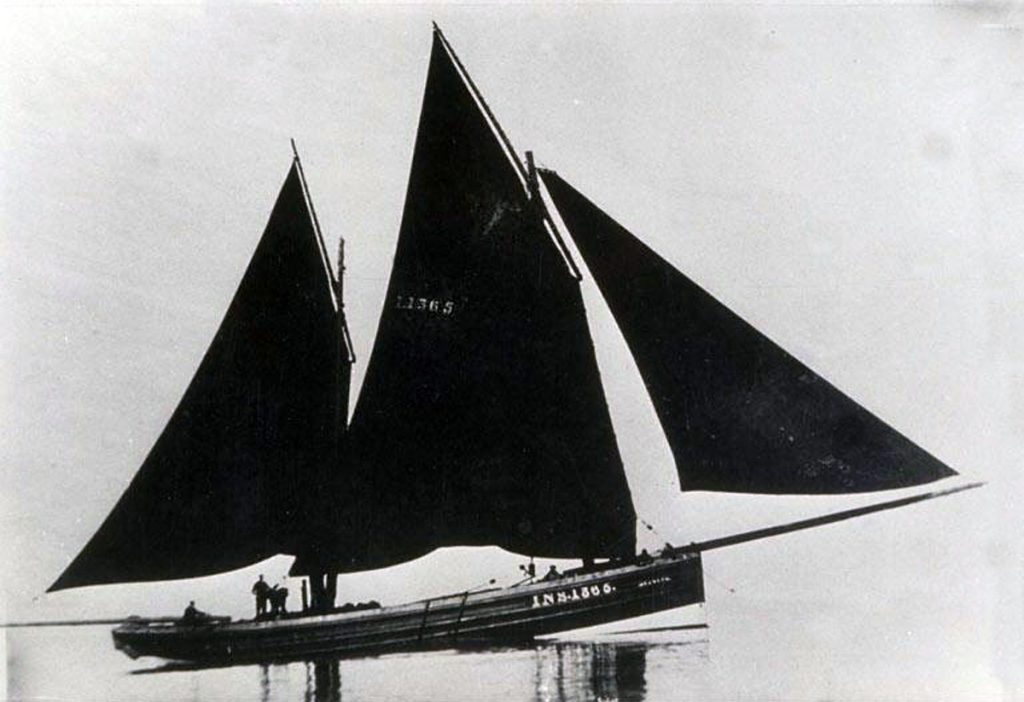 A Zulu under sail

The Dornoch Social Club became the Sunday afternoon HQ for members of the local community who came forward with a goldmine of information about Embo’s fishing history, and to hear Steve’s excellent talk about traditional Scottish fishing vessels.

So how did we get on with our investigation of the story of the circumstances that led to the Embo boats being abandoned in Loch Feet?

Records held in the National Fisheries Museum in Anstruther, show that prior to the 1st World War, Embo’s fleet was composed mainly of larger (30ft keel and upwards) boats. Until 1905 these numbered from around 20-30 boats, with another half as many smaller boats. After the war, only 3 large boats survived and by 1920 there were none. 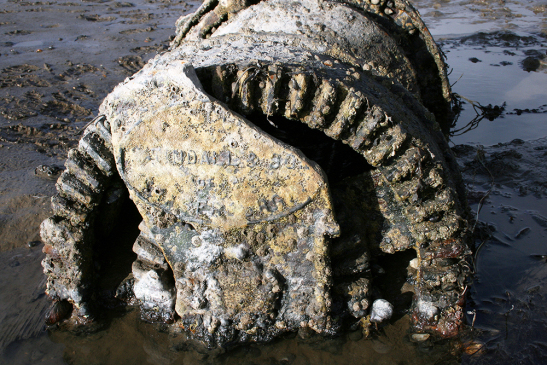 The capstan from a larger boat. This would have been used to help with sails and rigging

A fleet of around 20 smaller boats continued into the 1930’s but, again these all but disappeared after the 2nd World War. Vital information from the local community revealed that this location in Loch Fleet was traditionally used as a safe haven for over-wintering boats and as a place of safety during bad weather. It was used by both the Embo and Golspie fishermen. No-one could shed light on the burning of the boats, and we found no evidence of burning on the surviving timbers.

Bringing together the archaeological evidence and the local history, we think we are probably looking at several abandonment events that were particularly dramatic after both World Wars. The large size of some of the boats must mean that these ones date from prior to the 1st World War. 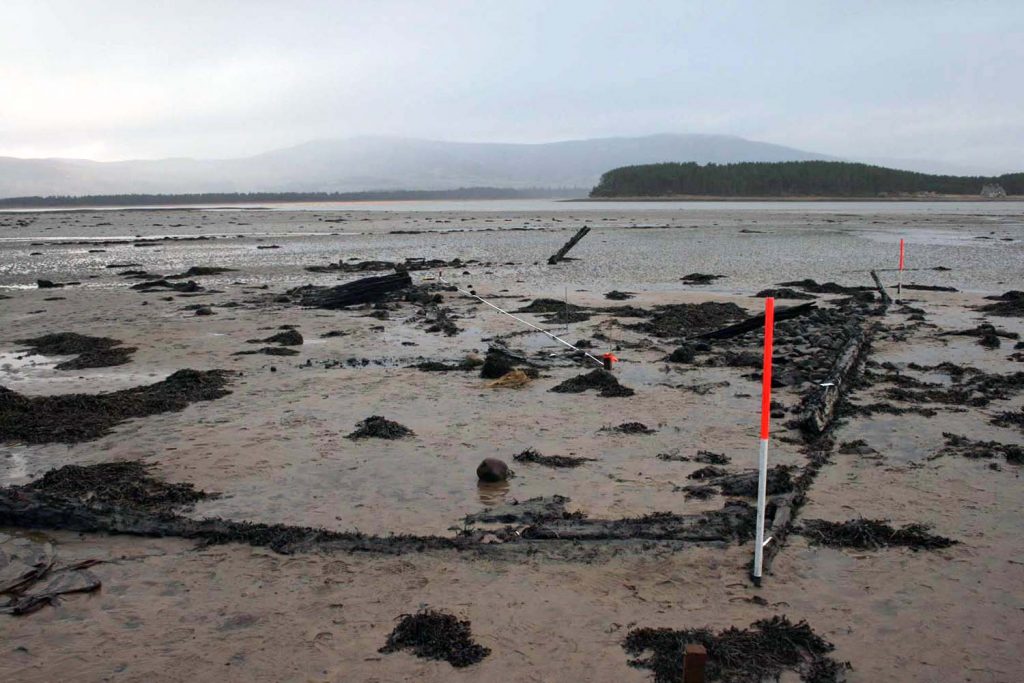 You are looking along the keel of a 17m long boat lying on her side. The straight stem post in the foreground and the stump of the raked stern sticking up in the background shows that she’s a Zulu

But the smaller ones may well have once been part of the fleet operating in the 1930’s. Boats that weren’t sold on or broken up were left in Loch Fleet to gently decay over the coming decades. The fact that many of the boats have been there for a century may explain why there is no strong local memory of them. 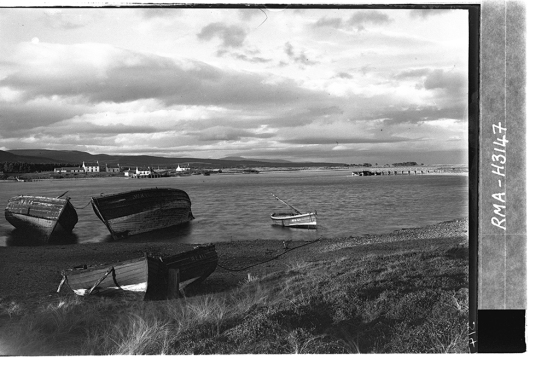 A 1932 photograph of our site from St Andrews University Special Collections. The 2 larger boats are probably already abandoned. Their relative position to each other is similar to 2 of our boats. Littleferry is in the background.

Over the next few weeks, our volunteers will be finishing off the survey, digitising the records and carrying out further research in local archives. The resulting report of what happened to a small fishing village on the northeast coast of Scotland will make an important contribution to our national picture of Scotland’s fishing industry because Embo typifies the story of hundreds of fishing communities in the UK. 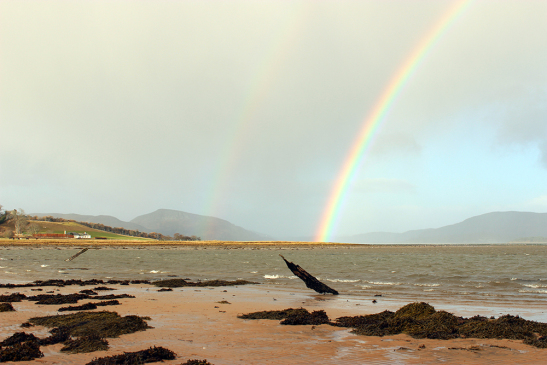 Many of our volunteers achieved a qualification as well as having a lot of fun by signing up for the NAS e-learning introduction to Nautical Archaeology course. If you’re interested in nautical archaeology you can try it out for yourself http://www.nauticalarchaeologysociety.org/ .