Submerged forests and fishing heritage in the Western Isles

In May, we were happily again in the Western Isles discovering new places with new friends and revisiting familiar sites with old ones.

We were lucky to spend time on Barra with Calum McNeil, local genealogist, retired fisherman, boat builder and font of knowledge about the history and archaeology of the islands. In Calum’s company the history of the island unfolded before us. Much of this history is intangible and the physical remains ephemeral or not recognisable without local knowledge. In a sheltered bay on Bagh Beag Calum pointed out the remains of a number of early-mid 20th century fishing boats. 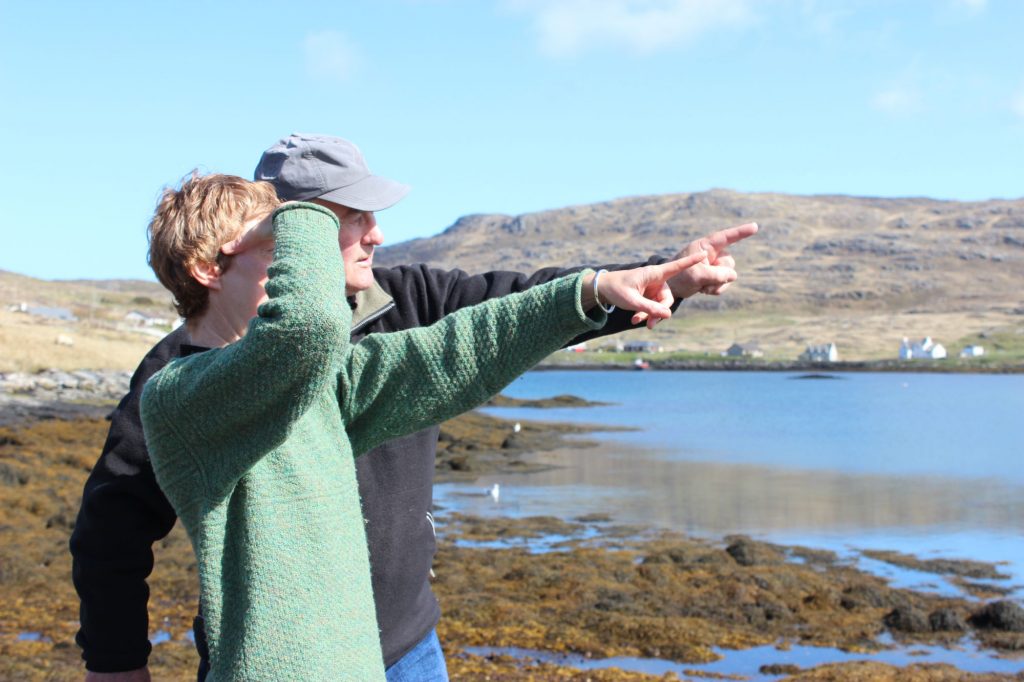 Although eventually abandoned on the rocky foreshore of Barra, these boats, a Fifie and two Zulus, were built on the east coast. Brought over from the mainland as fishing boats, the herring fisheries on which they depended had gone from Barra by the mid-20th century. The Morningstar, a Zulu built with an engine in the 1930s, was used for transporting cattle around the islands by the 1960s, before eventually coming to rest here. 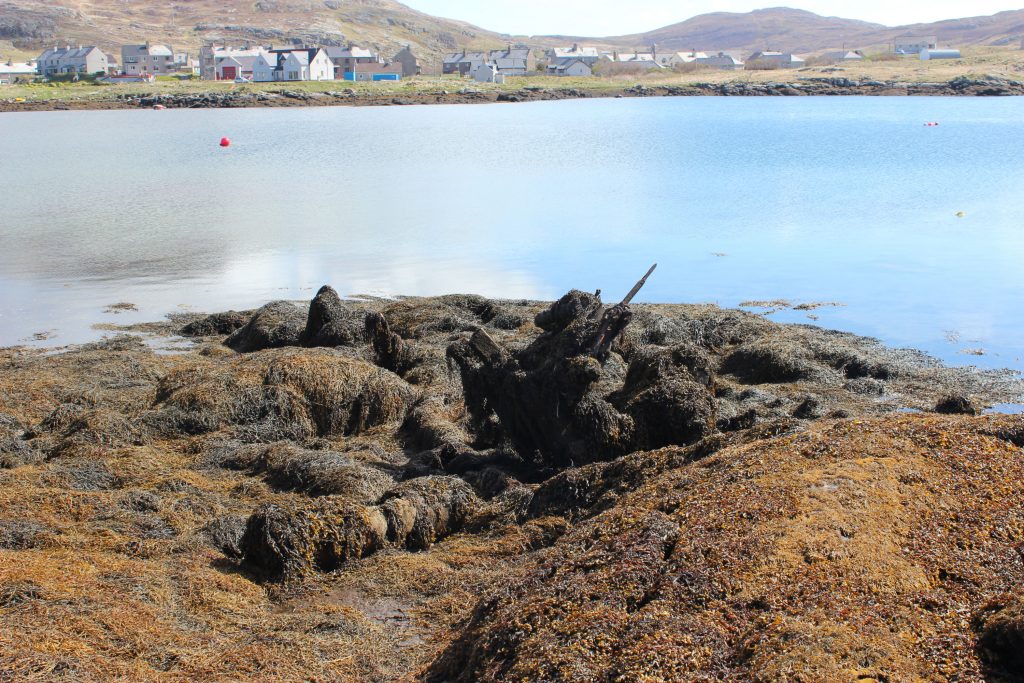 The remains of the Morningstar a Zulu built with a motor in the 1930s, possibly in Fife

Calum’s information about the (after) lives of these boats in Barra has added to what we learned from the ShoreDIG projects in Loch Fleet and Findhorn Bay and given a Western Isles perspective to our knowledge of how communities in different areas of Scotland responded to the waxing and waning of  the fishing industry in the 19th and 20th centuries.

Although of very different date, intertidal sites featured prominently in travels northwards too.

At the beginning of the year, David, Simon and Roger had reported what looked like timbers eroding from a peat shelf between the tidal island of Eilean An Dunain and Sheabie on Berneray. It’s hard to imagine now, but the foreshore here contains evidence that the environment in this sheltered bay was once very different. 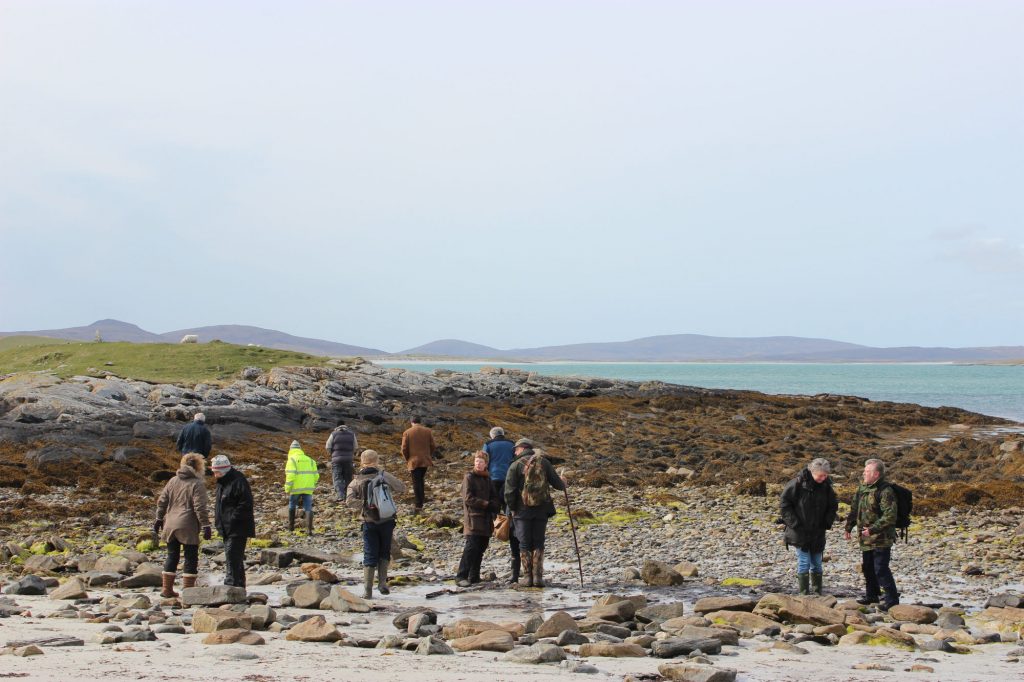 Members of Access Archaeology explore the beach at Sheabie, Berneray

Preserved in the peat are the remains of roots, branches, trunks and stumps of a prehistoric submerged forest. Working with Access Archaeology and Scott Timpany of UHI, we spent the day recovering samples and recording the remains in detail. 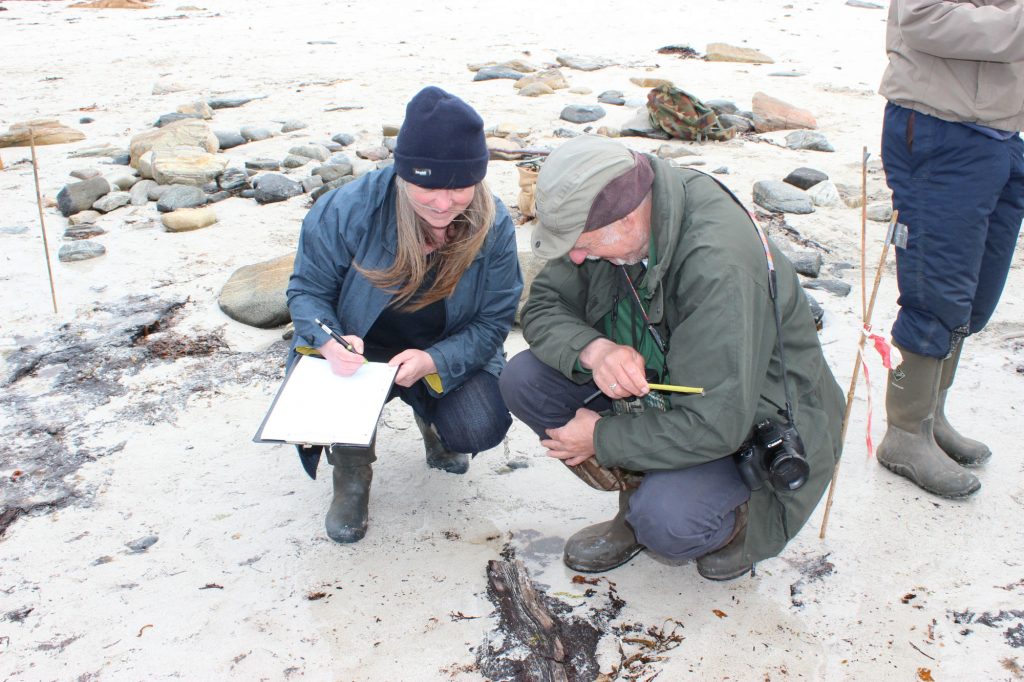 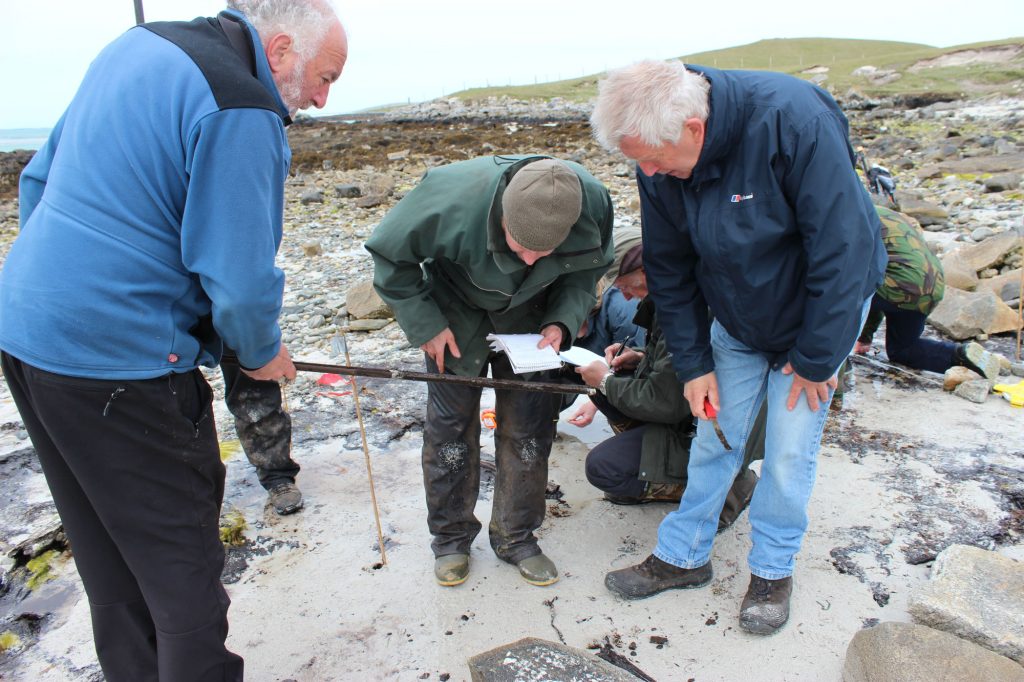 Scott records the stratigraphy revealed in an auger sample

The examination of the samples normally happens behind the closed doors of a lab, but on this occasion we were lucky enough to get an insight into this process with a workshop from Scott on wood identification. Although we were all complete novices, with his expert guidance, we identified birch and willow as two of the species which grew thousands of years ago on what is now beach. 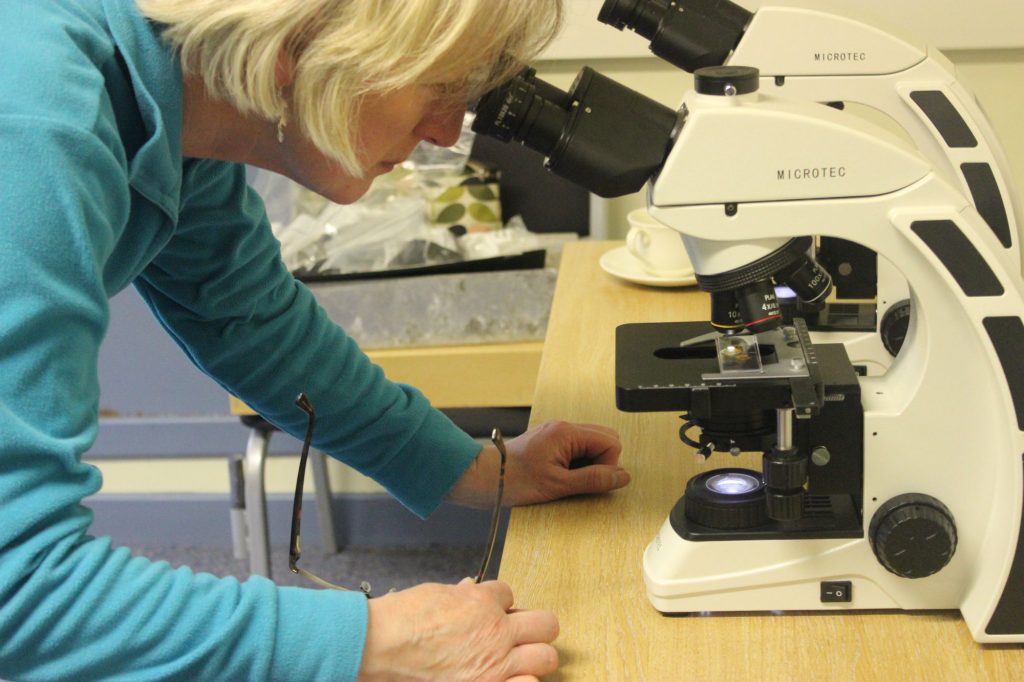 Preserved prehistoric hazel nut shells were much easier to spot. 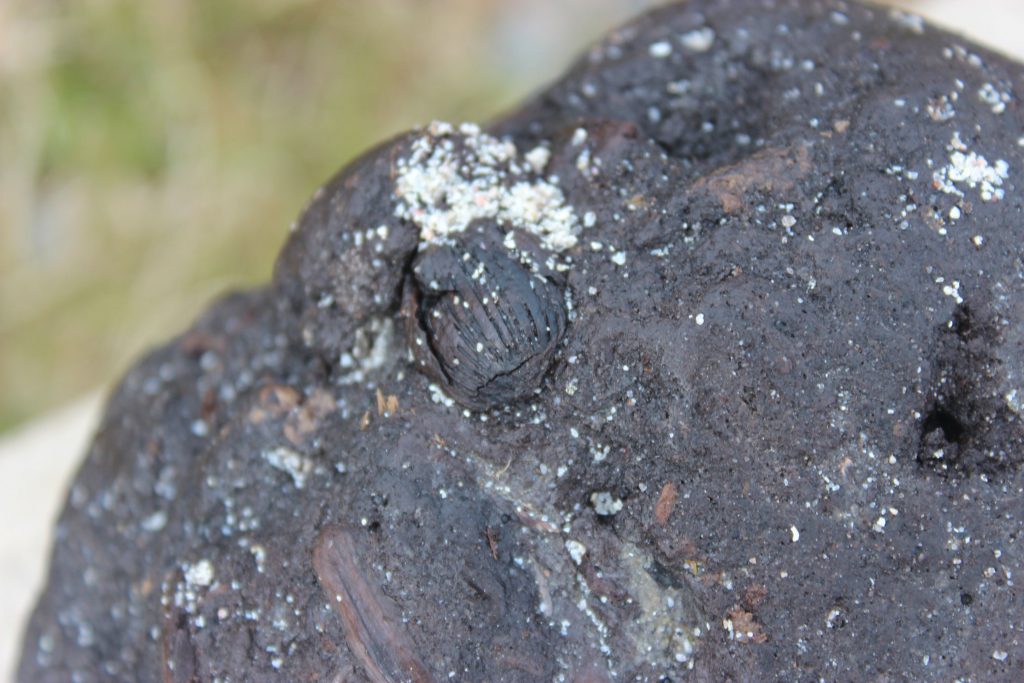 Another day and yet more reported remains of ancient trees in intertidal peats. These ones were spotted by Annie whilst walking her dogs at Lionacleit in Benbecula. A larger area of peat survives here and seems to have been the site of an extensive forest with the remains of large trees. 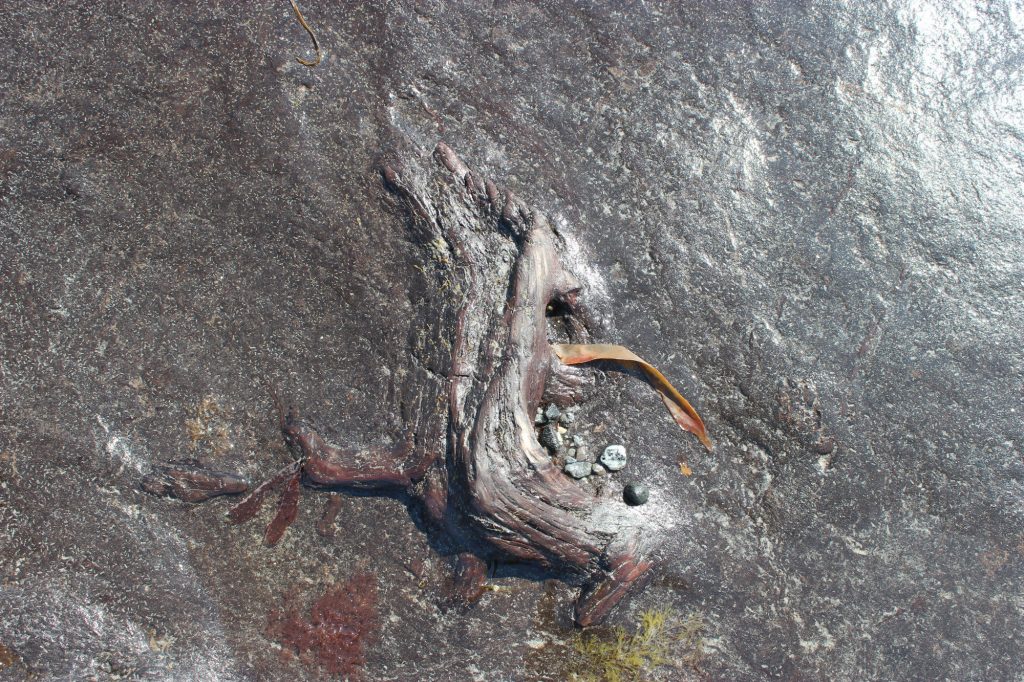 Sculptural remains of a tree root at Lionacleit

It continues beyond the low water mark, and with South Uist just across the channel, are we looking at the submerged remains of the land that once connected the two islands? 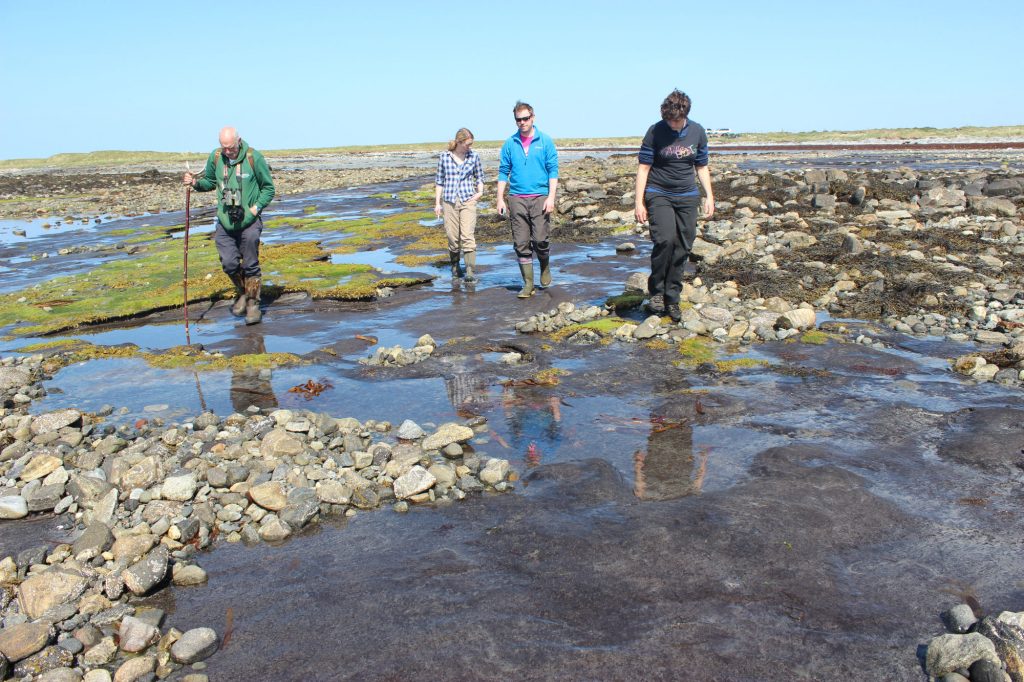 There’s also evidence of human activity here, with a cluster of finds including animal bone and a fragment of struck quartz, as well as this saddle quern. 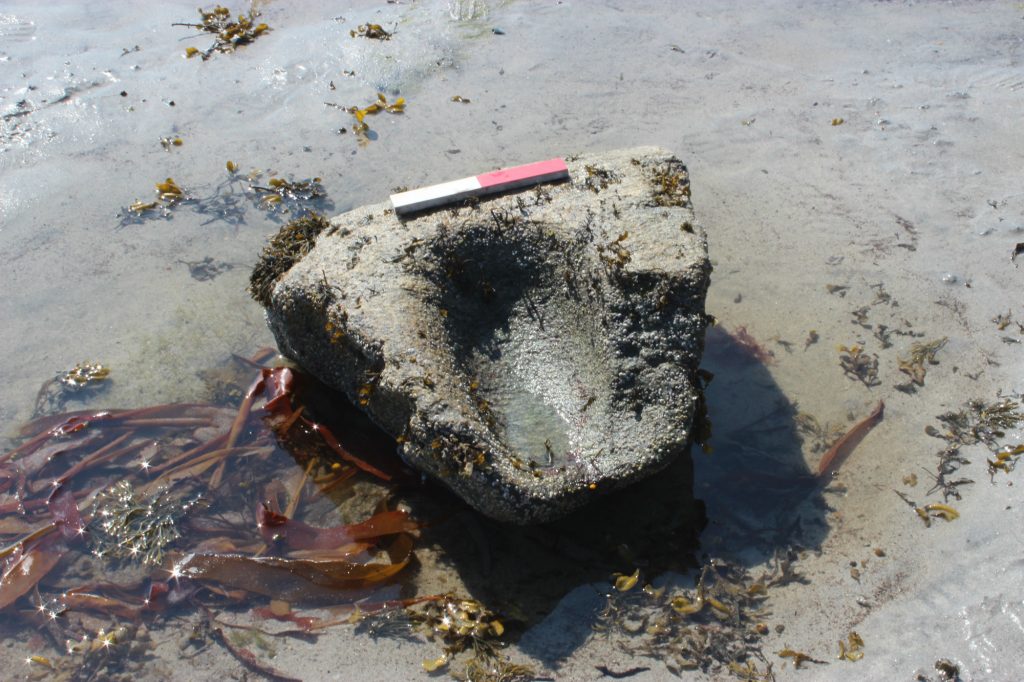 There was only time for a fleeting visit, but we’re planning a return trip to take a more detailed look at the area.

The intertidal peats of North Uist had one last surprise to offer up. On a visit to Loch Paible, to check on the condition of the site that we dug in Spring 2013, look what was left behind! 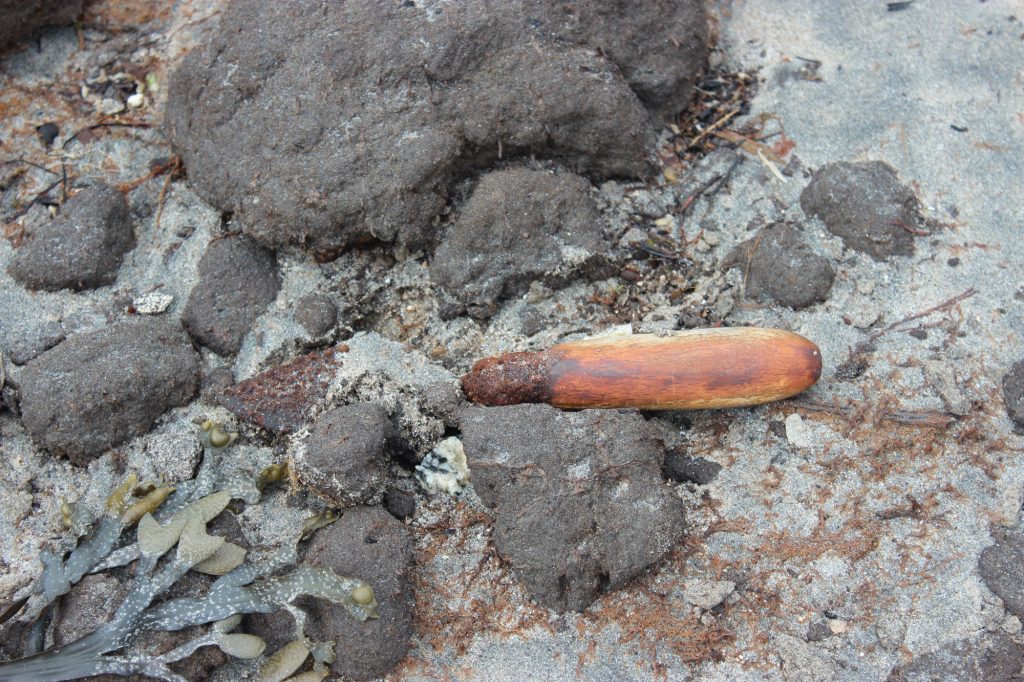 The trowel has been submerged by seawater twice a day for over three years – but other than a little bit of rust it’s absolutely fine.