Storms reveal a shipwreck burial, a new broch and a wheelhouse in Channerwick, Shetland

We start our story in December 2012, when winter storms exposed a male human skeleton awkwardly squashed into a too small grave at the foot of the coast edge in Channerwick, Shetland. Investigation of the remains was commissioned by Historic Scotland, and radiocarbon dating of the bone was undertaken as part of this work, the results revealing that he was buried between 1760 and 1820. The washed-up bodies of drowned or shipwrecked seafarers were sadly once a relatively common occurrence on the shores of the wild seas around Shetland. Bodies, which would often have been in a poor state of preservation, were placed onto a piece of sailcloth and buried as close to the site of their finding as possible. This was probably the fate of our skeleton. 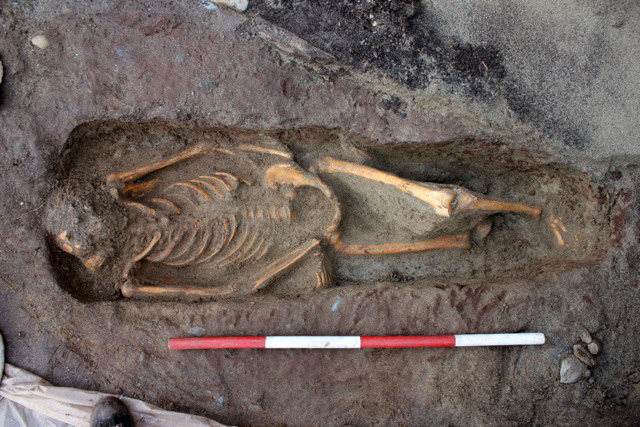 A shipwrecked seafarer? The body has been squashed into a too small grave.
Photo Samantha Dennis, copyright Historic Scotland

But at Channerwick – other stories were also revealed by the storms. In the coast edge behind the skeleton, the sea had sliced through a monumental structure. At first sight this appeared as a confused jumble of masonry, layers of coloured clay and charcoal and an enigmatic corbelled cell. 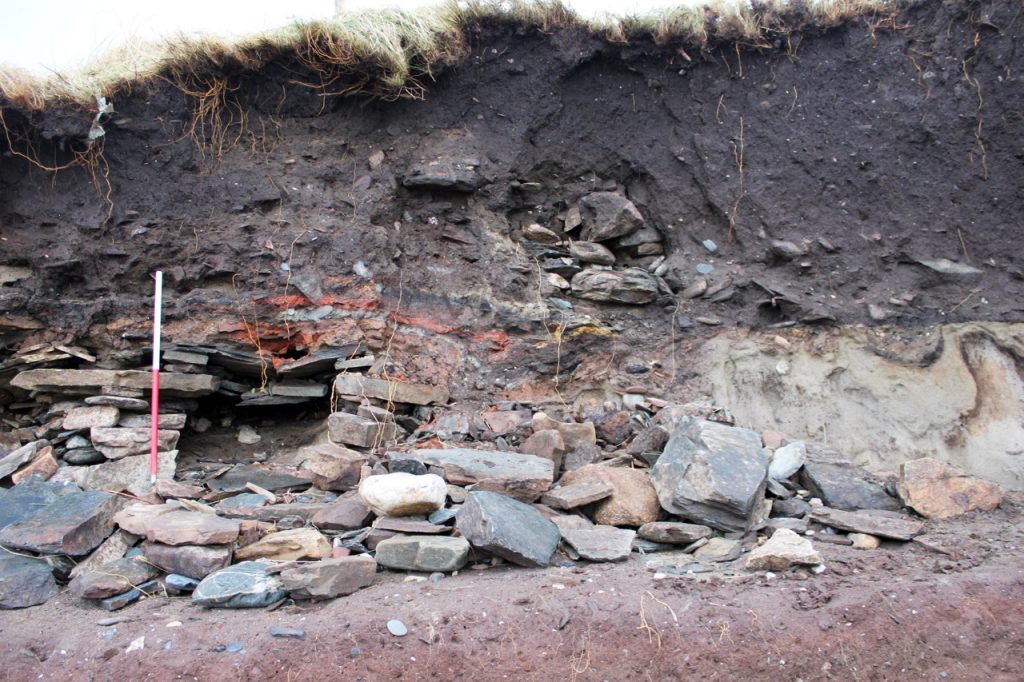 The corbelled cell covered with layers of brightly coloured clay before our project started. Photo by Samantha Dennis

After much looking and much discussion with our Shetland-based archaeology colleagues, the jumble of massive stones gradually resolved itself into a 5m wide wall; the layers into floors and hearths, and the masonry into internal walls. We thought we were probably looking at the foundations of an unrecorded broch with possibly additional structures inserted into it at some time during its long Iron Age history. 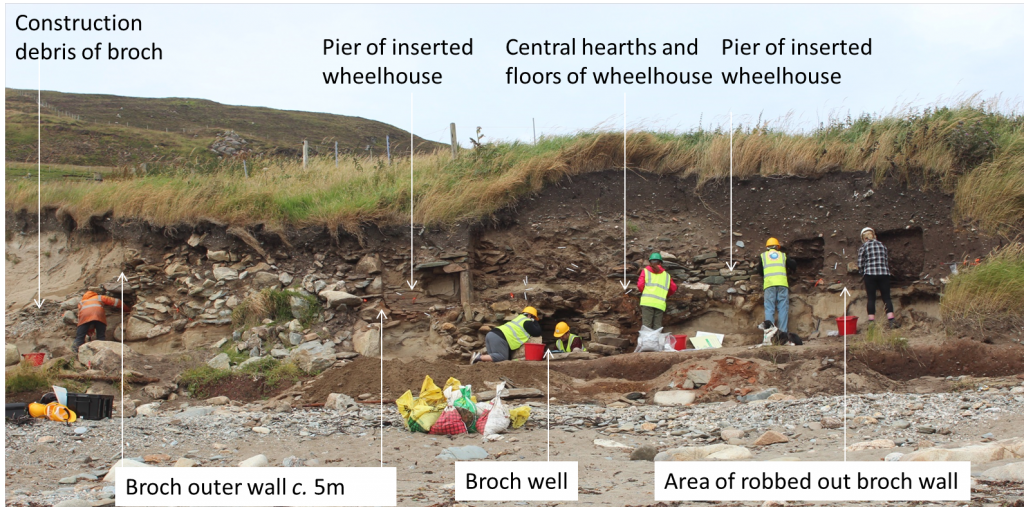 We gradually unpicked the main elements of the buildings.

In August 2015, an army of volunteers recruited through the brilliant new group Archaeology Shetland joined us to clean, investigate, sample and document the section. Through this careful work we were able to better understand the story of this complicated site, before it succumbs to further erosion. 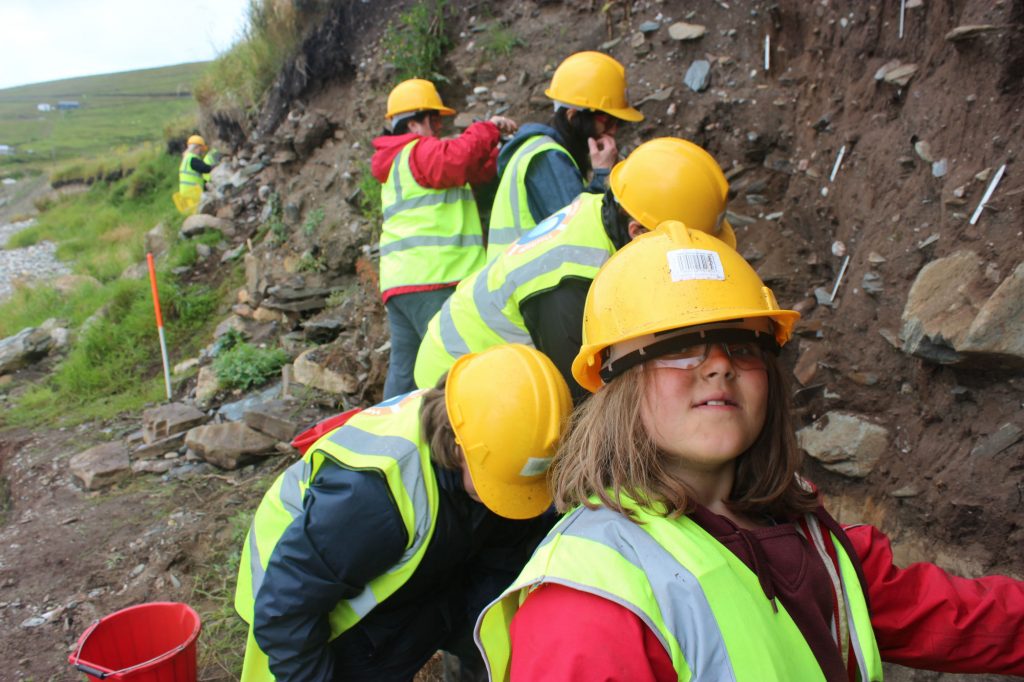 Archaeology Shetland volunteers of all ages cleaning the section

Over 2000 years ago, a massive circular stone wall was constructed upon windblown sand at the head of Channerwick Bay. The wall was made with blocks of Channerwick granite, a bright white very coarse-grained stone composed of quartz and mica. They would have literally sparkled in the sunshine.

In the centre of the broch, investigation of the corbelled structure revealed a beautifully constructed well with small perfectly formed steps leading down into it. We stopped at a depth of 2 metres, but we think the well continues downwards for at least a further metre. 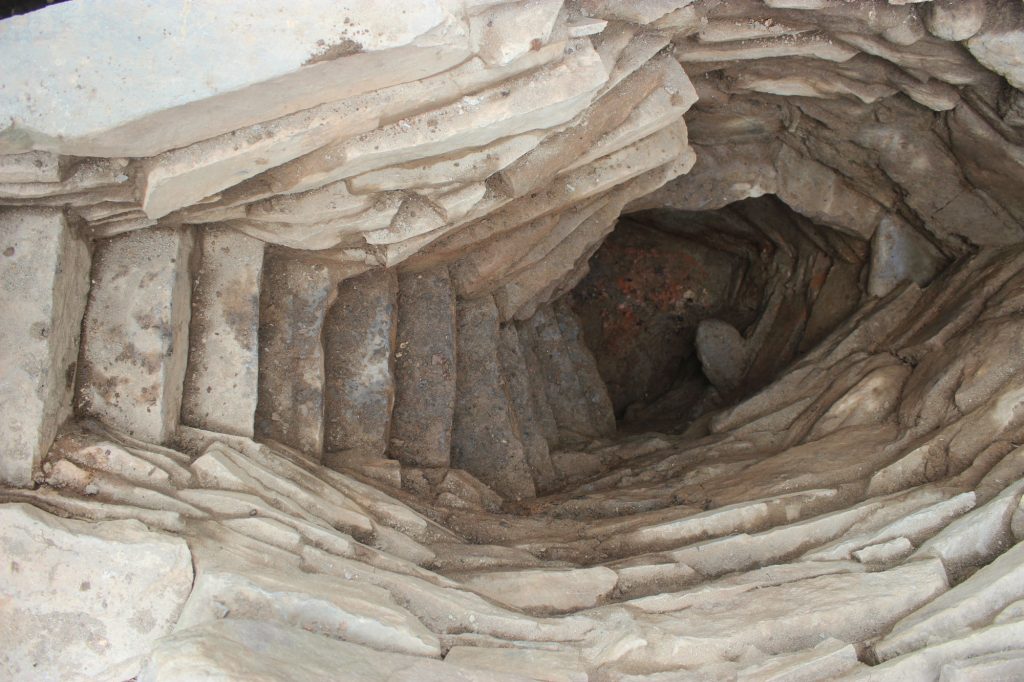 The well had been deliberately and rapidly back-filled with layers of clean beach sand and soft clay and charcoal. The lack of any of the usual detritus that accumulates in Iron Age buildings tells us it was filled in and sealed over before later floors and hearths accumulated upon its corbelled roof.

A few hundred years later (if we estimate from other similar sites), the broch ceased to be a broch, and was remodelled into a domestic structure called a wheelhouse. Radial drystone piers (the spokes) were built against the inside face of the broch wall. This would have been reduced in height, and in other sites, e.g. Scatness, the spare stone was used to construct new wheelhouses nearby. 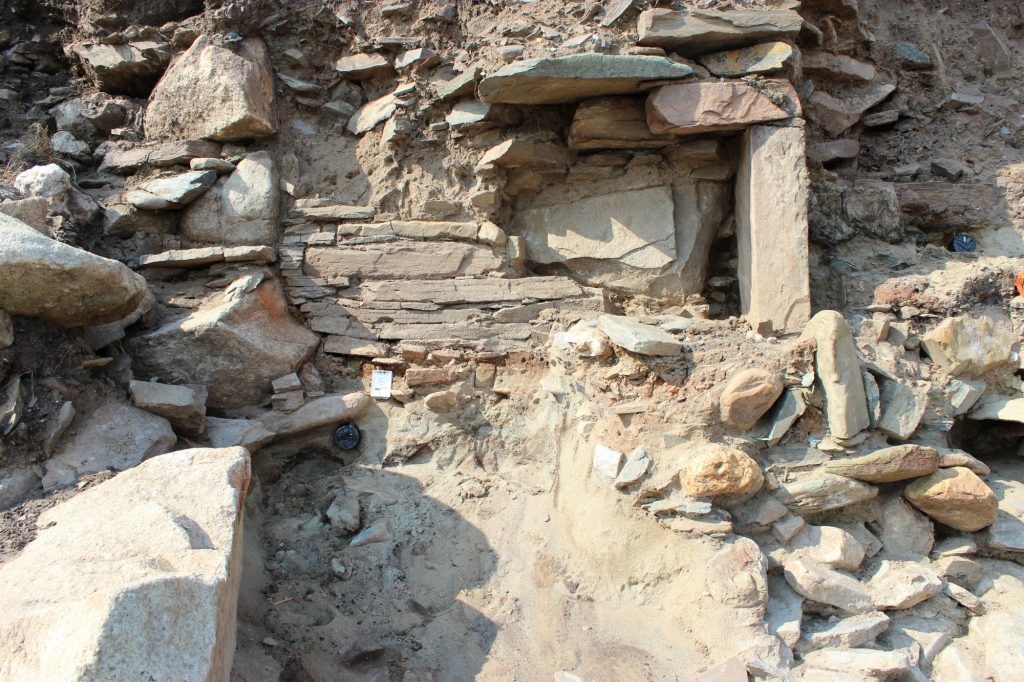 One of the radial piers of the wheelhouse constructed against the inner face of the broch wall.

Layers and layers of bright brightly coloured clay formed the central hearth of the wheelhouse, surrounded by spreads of ash and burnt ‘floor’ materials. These were rich in the remains of Iron Age meals of fish, beef, mutton and even whale or dolphin. We also found pottery, cobble grinders and pierced stone pebbles (probably loom-weights) in these layers. Next to the hearth, a small pit containing slag and charcoal was an exciting find, because it shows that iron was being worked or smelted here. 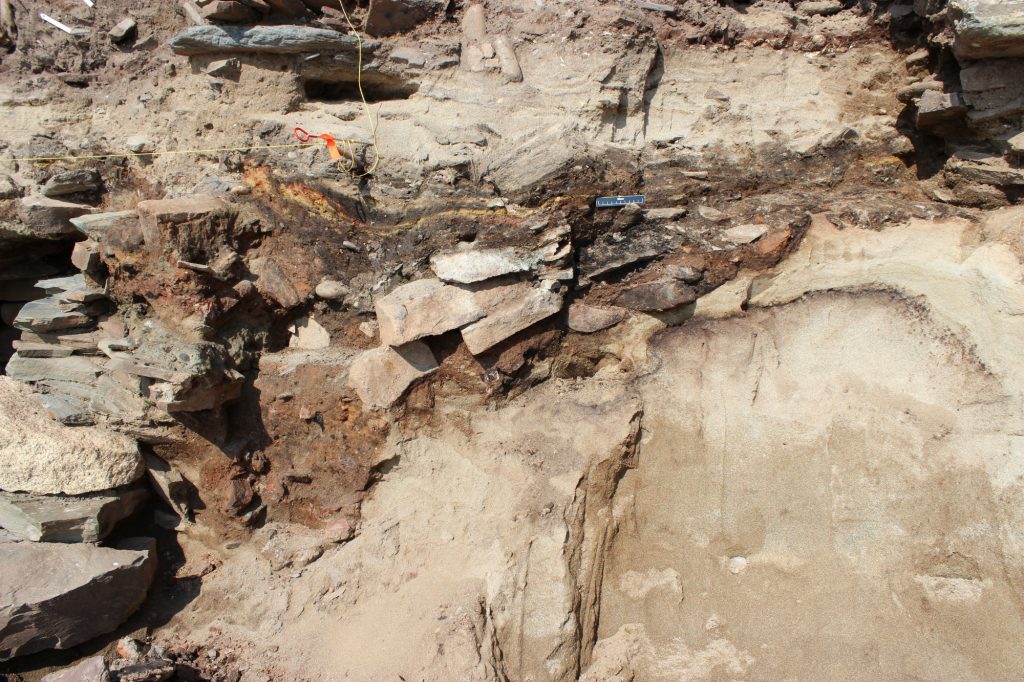 Is this the remains of a small iron smelting furnace? Slag was found beneath the small photoscale.

We don’t know yet when people moved out and abandoned the wheelhouse, but medieval and 19th century pottery in soil where some of the broch walls should have stood tells us that it was quarried for building stone from at least the medieval period onwards. This stone robbing was so extensive that only a sliver of the Iron Age building foundation survives.

But the broch lived on in the stone of medieval and later buildings of Channerwick. A ruinous 19th century chapel may have been the last of the buildings constructed with stone robbed from the north broch wall. 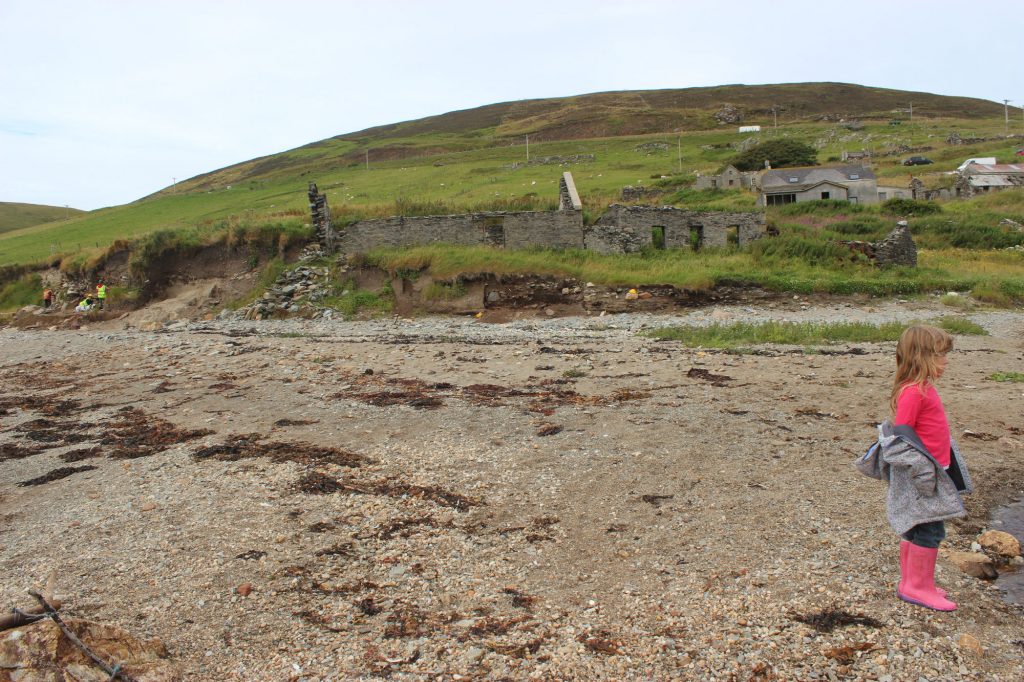 The 19th chapel or meeting house, with the broch around the corner. The gable end is collapsing down the coastal slope. You can see the ruins of Channerwick township across the hillside. It is in these that the broch lived on.

Many residents and visitors to the site remembered singing and worshipping in the chapel, which is now itself gently flowing into the sea.

Here at Channerwick coastal erosion has opened a window into the earliest phase of a broch’s construction right through to the final act of stone quarrying of its massive walls in the 19th century. The discovery and excavation of a broch well in Shetland is unique – although who knows what could be buried under the floors of some of the hundreds of the brochs on the islands?

Post-excavation work is underway in St Andrews and in Shetland, where Shetland museum is coordinating the finds processing and analysis. 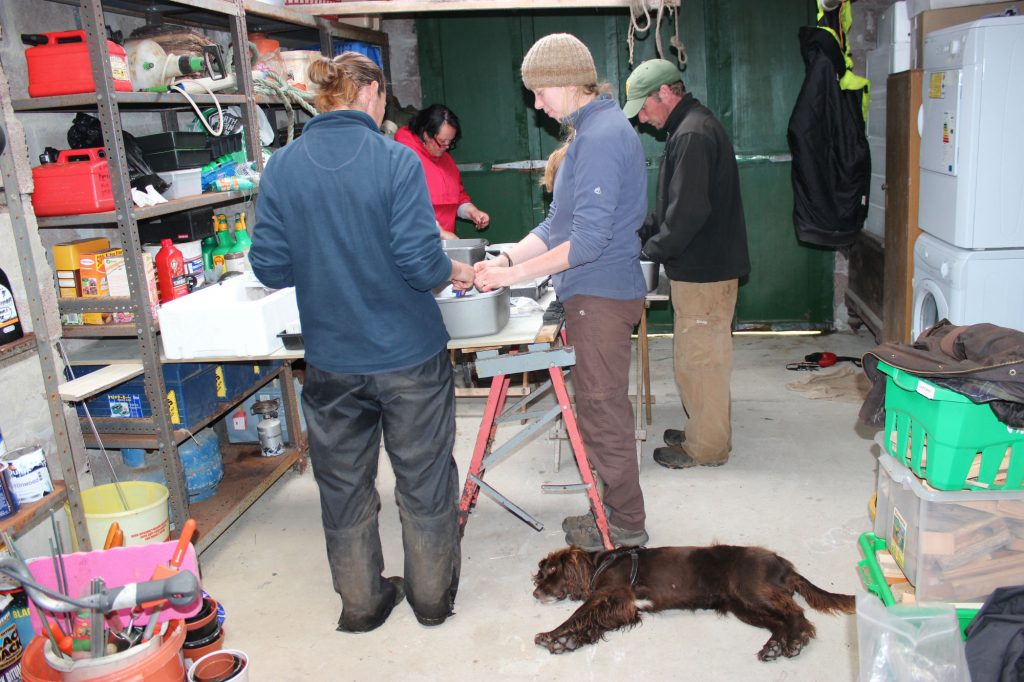 A huge thank you to Mike who generously put his garage at our disposal for wet weather finds washing.

We enjoyed every second of the fieldwork at Channerwick, and learnt a huge amount from the many volunteers and visitors who came to the site and shared their stories with us – including extremely knowledgeable colleagues from Shetland Museum and Archives, and the Shetland Amenity Trust. 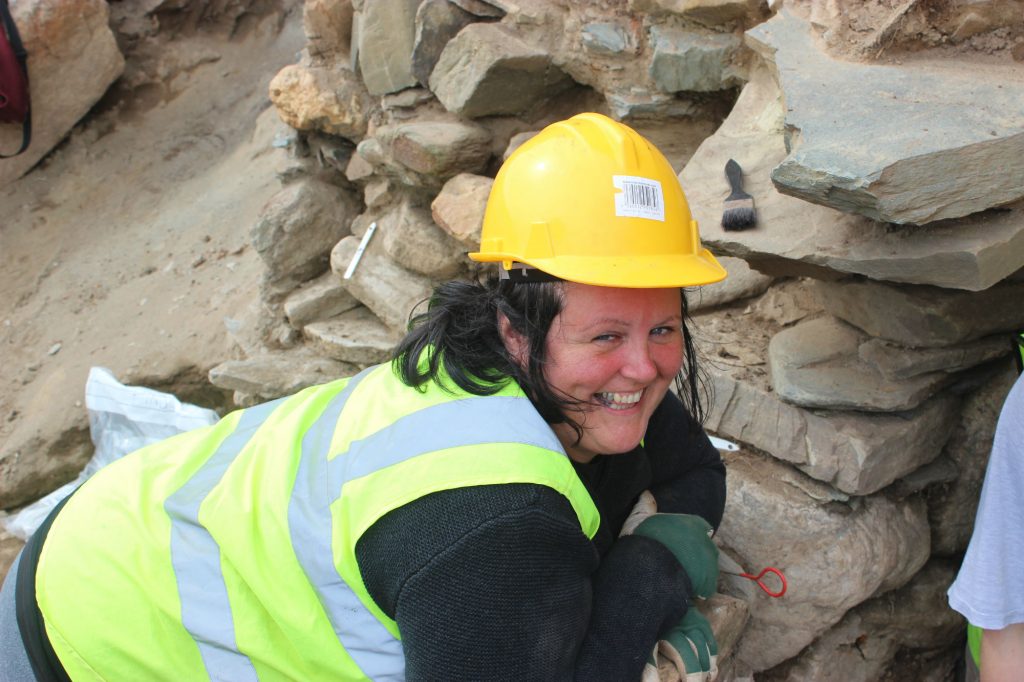 A special thank you to Archaeology Shetland who made this project happen, and to all the volunteers who made it great.