Scotland’s Coastal Heritage at Risk: A Model of Volunteer Involvement in the Research and Management of a Threatened National Resource

This article was originally written for the January 2018 edition of the Society of American Archaeology’s magazine the Archaeological Record, and is reproduced here so that non-members can read it.

Climate change effects leading to global warming, rising sea levels, altered weather patterns, and more intense storms amplify the natural processes that cause change and decay in the historic environment. This puts cultural heritage across the globe at increasing risk of damage and loss.  According to climate change projections, we can expect this to accelerate over the coming century. The scale of the issue can seem insurmountable. However, it also presents opportunities for fresh thinking about the role of heritage in society. This paper discusses an example in Scotland, where the need to better understand the nature and scale of the problem of eroding coastal heritage was used as an opportunity to expand volunteering in the sector by involving people from the communities affected.

Between 2012 and 2016, over 1,000 volunteers [1] took part in the Scotland’s Coastal Heritage at Risk Project (SCHARP), coordinated by SCAPE (Scotland’s Coastal Archaeology and the Problem of Erosion), based at the University of St Andrews. SCHARP builds on nearly 20 years of experience in SCAPE of public involvement in tackling the issue of eroding coastal heritage. The project was developed to address the need to review and update data on the condition of important sites threatened by coastal processes. We needed to update evidence about what was most at risk and where, upon which to base management options and practical action plans. Our aim was to place volunteers at the heart of the research in order to grow capacity in the local stewardship of Scotland’s coastal heritage, to enhance site records through the contribution of locally known information, and to gain a more nuanced sense of the community value of cultural heritage affected.

Existing coastal heritage records[2] were made available through a web-based, interactive Sites at Risk Map (www.scharp.co.uk/sites-at-risk). Each site record acted as a portal from which survey forms could be downloaded, and completed surveys and photographs could be uploaded to the project database.

The interactive map formed the basis of a ShoreUPDATE Android and IOS app, which also contained the coastal heritage site records linked to a survey form. 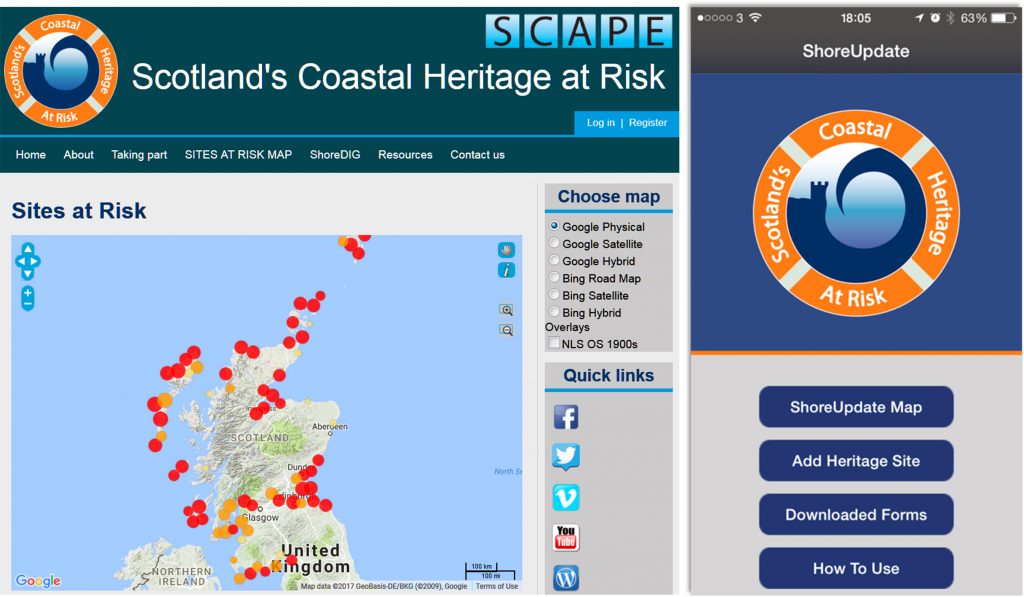 The app democratised participation by making the data as widely available as possible using familiar technology. Volunteers were able to use their own devices to download site records and maps to take into the field. Widely understood mapping and GPS functions first helped volunteers navigate to sites, and then use their device GPS and camera functions to refine site location and take photographs before submitting records using Wi-Fi or 3G connectivity. The app includes an “Add New Site” feature, also utilising the built-in GPS and camera functions of most smartphones. 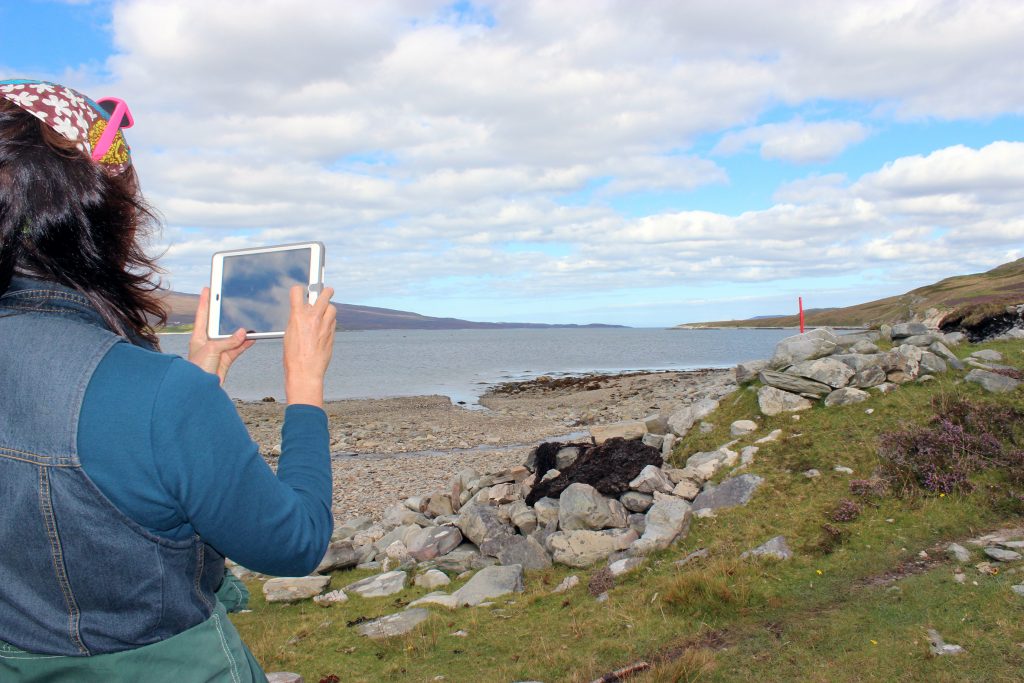 “Using the app. . .allowed us to. . .go for a walk with a purpose. It really meant that you do go from looking at a beach landscape where there are a couple of ruins—to actually starting to understand people lived there, people worked there. . .It really did just bring the landscape alive.” Volunteer, Highland

Training in how to use the website and app was delivered in 43 communities around Scotland. Eighteen training events involved extended periods of field survey with groups of volunteers, increasing participants’ confidence and developing skills and consistency in archaeological observation and recording. Every record submitted was moderated, which allowed project officers to keep track of the information and maintain a dialogue with volunteers. 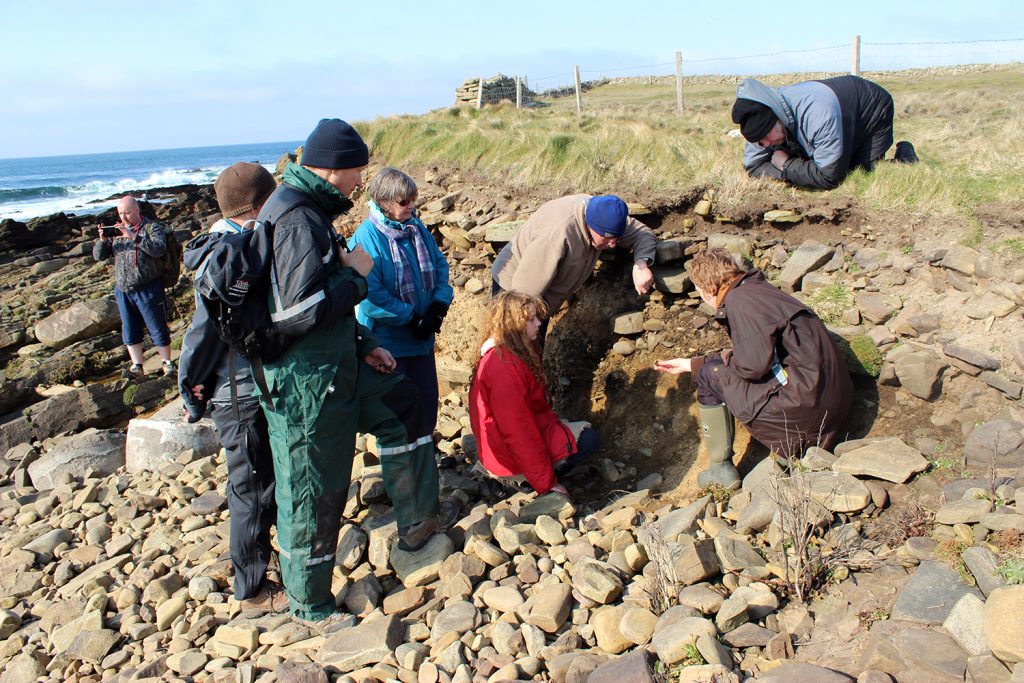 Examining an eroding structure with volunteers on a ShoreUPDATE fieldtrip on the Island of Sanday, Orkney

“You have great access to the people involved and that really makes it worthwhile. You find a new site and go onto the system, add the sites to the system and there’s your spot! It’s instantly there, in seconds. . .The images that you put on explain the story and people can then revisit it and they can add their own section to the same result, so it’s a really good interactive way for community involvement.” Volunteer, North Uist

Volunteers submitted 1,074 site surveys and an additional 400 records of new sites not previously documented. Translated into person hours, the contribution from volunteers equates to 695 days of fieldwork!

“We’ve come to recognise things and there is definitely this sixth sense you develop about spotting things in the landscape, suddenly you get this feeling at the back of your neck when you’re looking at something that shouldn’t be there. We’re becoming better at the recording.” Volunteer, Benbecula

The large sample size achieved by the survey enabled a comprehensive review of the data. The significant research and management outcome of the SCHARP survey[3] was the identification of the highest priority sites, of potential national, and international, importance, most vulnerable to damage and loss as a result of coastal processes. The results have been welcomed by the heritage sector in Scotland.

“We plan to use the SCHARP prioritisation report in order to address the problem of coastal eroding archaeological sites in Scotland strategically” Senior Archaeology Manager, Historic Environment Scotland

Locally, the results will feed into regional archaeological research frameworks and will inform local heritage priorities. The SCHARP model also has wider implications for how we collectively approach and manage transformation and loss in the historic environment as a consequence of climate change. We have shown that involving volunteers in collaborative research can produce the robust evidence base needed to develop management priorities. But the benefits extend much further. SCHARP has resulted in a network of trained volunteers embedded in communities who will continue as stewards in the monitoring and local management of the coastal heritage resource and as ambassadors and leaders in raising awareness about coastal change.

“I learnt skills of how to actually get people who would normally not be interested—to sort of set them alight so that they were interested and I found that a great skill.” Volunteer, Eyemouth

Running alongside the surveys, communities were encouraged to put forward project ideas which addressed management, interpretation, or the need for further investigation at locally valued sites threatened by coastal erosion. These projects were an important mechanism for widening participation and providing opportunities for volunteers to develop a range of skills. 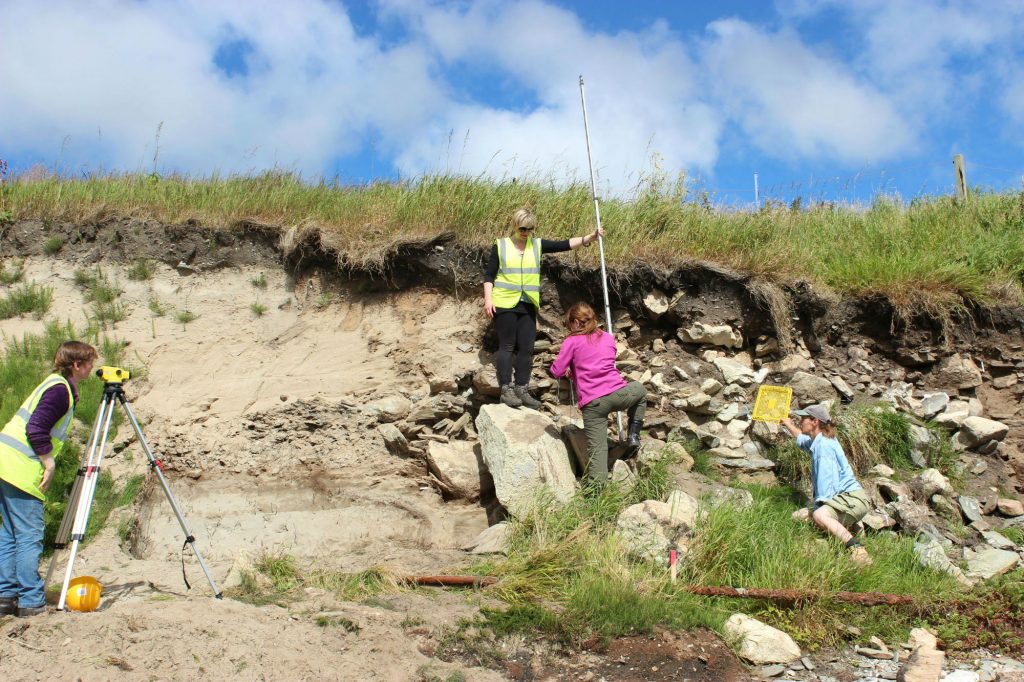 Volunteers carry out an emergency ShoreDIG investigation and recording of an Iron Age broch at Channerwick in Shetland, revealed by a storm in 2012

The resulting projects form inspirational case studies of what can be achieved through community action at eroding sites, and can be found at www.scharp.co.uk/shoredig-projects.

“It feels like something is really happening at the caves when there are people who take them seriously and realise the threat they’re under and want to do something about it.” Volunteer, Wemyss Caves ShoreDIG

We often express the SCAPE approach to threatened coastal heritage as one of addressing a national issue through a local lens. We use eroding heritage as an agent for bringing benefits to us all by breaking down a seemingly insurmountable problem into smaller manageable windows of opportunity—where we work closely with local communities at locally valued sites. However, approaches like this thrive because of societal conditions that we probably take for granted in the UK. Public, online access to historic environment records is fundamental to being able to develop the interactive tools that enable people to participate in the discovery, documentation, and stewardship of their local heritage. In Scotland, the right to roam is of enormous benefit in allowing volunteers easy access to heritage sites everywhere. The Scottish Government’s high level Historic Environment Strategy[4], which drives heritage policy and practice, explicitly encourages maximising volunteering opportunities in the heritage sector. This is implemented in the policy and practise of Scotland’s lead heritage body, Historic Environment Scotland, which supports organisations like ours to carry out public facing research to investigate the impacts of climate change on the historic environment and better understand the value of heritage to communities. Without these conditions, it would be much harder to work in partnership with volunteers from local communities; and we would lose the results and insights that such collaborative research brings to our understanding and responses to some of the challenges facing our coastal heritage.

[1]The SCHARP Final Evaluation Report provides details about the project and the involvement of volunteers: http://www.scharp.co.uk/media/medialibrary/2017/09/SCHARP-HLF-EVALUATION_FINAL_web.pdf

[3] The full report A Review of Heritage at Risk from Coastal Processes in Scotland presents the data and analysis: http://scharp.co.uk/media/medialibrary/2017/12/Review_of_Coastal_Heritage_at_Risk.pdf

[4] Our Place in Time: https://www.historicenvironment.scot/about-us/who-we-are/our-place-in-time/