The RAF Wig Bay ShoreDIG got underway in March with the survey of the remains of the flying boat base.

Set up in 1942, this was Britain’s main wartime base for the maintenance of flying boats. It specialised in converting American-built Catalinas to RAF standards and in servicing other flying boats, including the enormous Sunderlands, which were to play a vital role in convoy protection during the Battle of the Atlantic. After the end of the war, the base remained in use until 1957; servicing, testing, and ultimately scrapping the now-redundant machines. 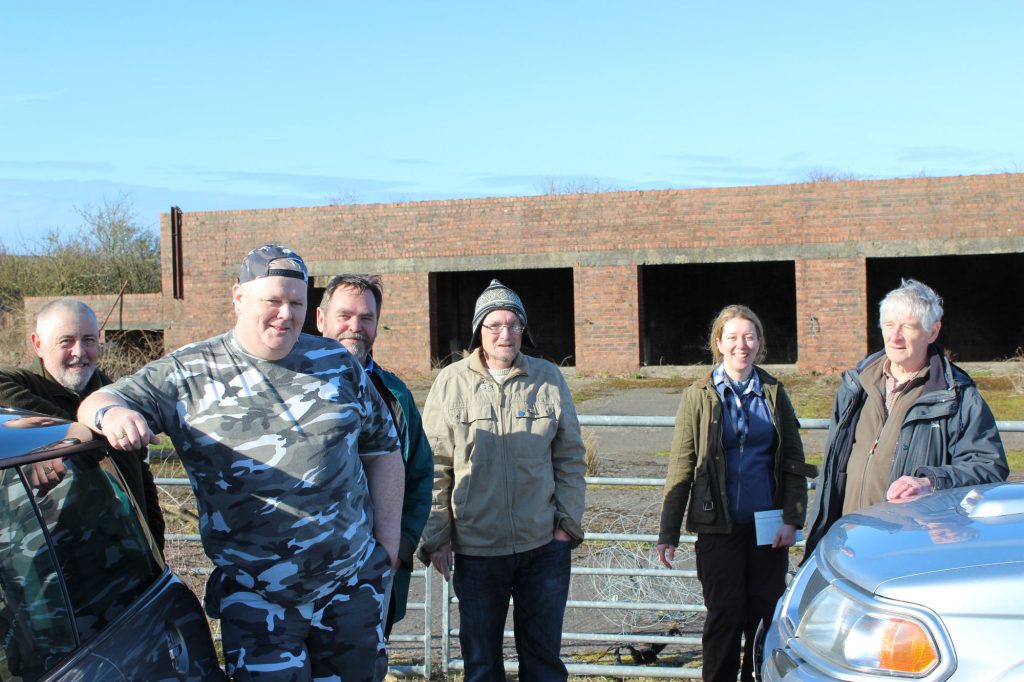 Some of the RAF Wig Bay survey team after a productive day’s recording.

The basis of our survey work was a wonderfully-detailed RAF plan dating to 1945 and redrawn in 1957, when the base was being decommissioned. This includes labels for most of the buildings and structures, which has helped us to understand the different functions of different areas of the base. 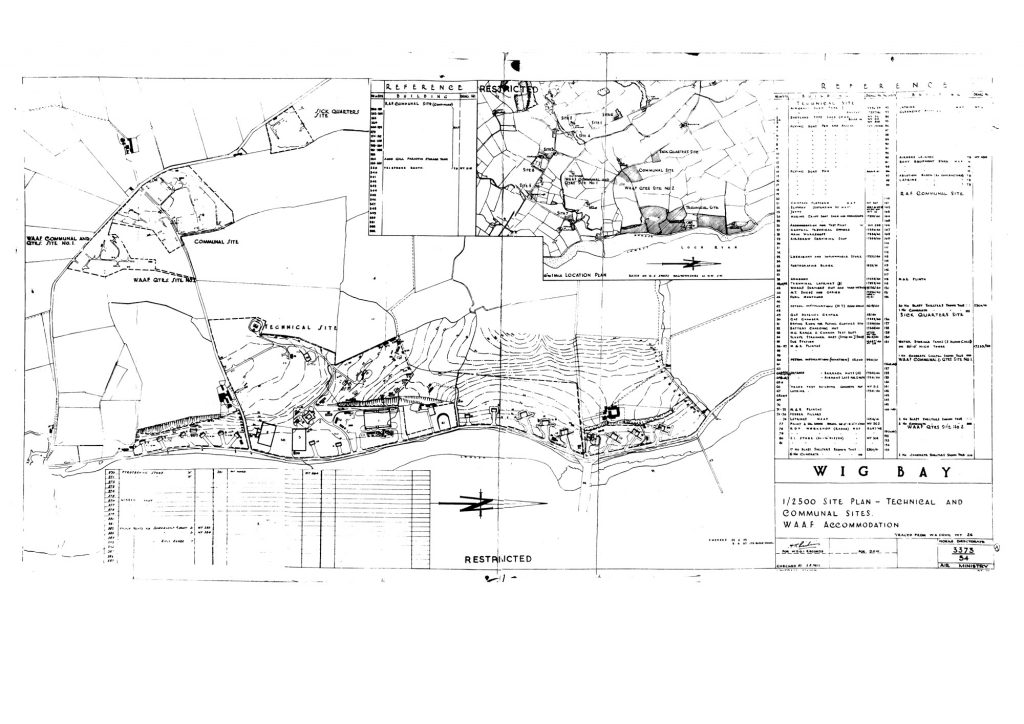 The 1957 RAF plan of the flying boat base at Wig Bay. Although you might not be able to read it on your screen, this shows individual buildings in this part of the base, with labels describing their function. From Dumfries & Galloway Council Archaeology Service.

A great series of RAF aerial photos, held by the Welsh Government, were another vital tool for planning the survey. Whereas wartime maps and plans may show what was planned and not what was actually constructed, as they say ‘the camera never lies’ – so these photos from 1953 are a more accurate record of what the base actually looked like towards the end of its working life. 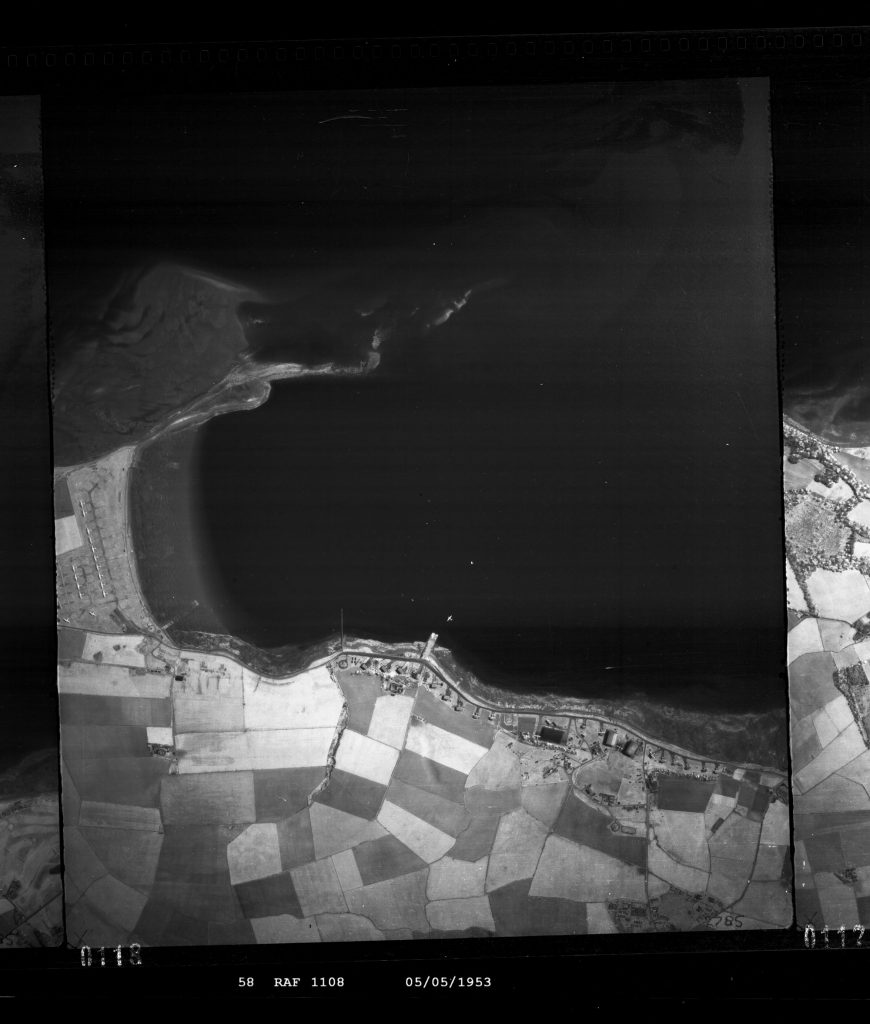 An RAF aerial photo from 1953 showing the flying boat base at Wig Bay towards the end of its service. Click the photo to view a bigger image where you can see more detail, including a flying boat moored just off the slipway. Photo courtesy of the Welsh Government.

Starting at the south of the base (on the right of the aerial photo above), we recorded an area of flying boat pens and maintenance hangars. 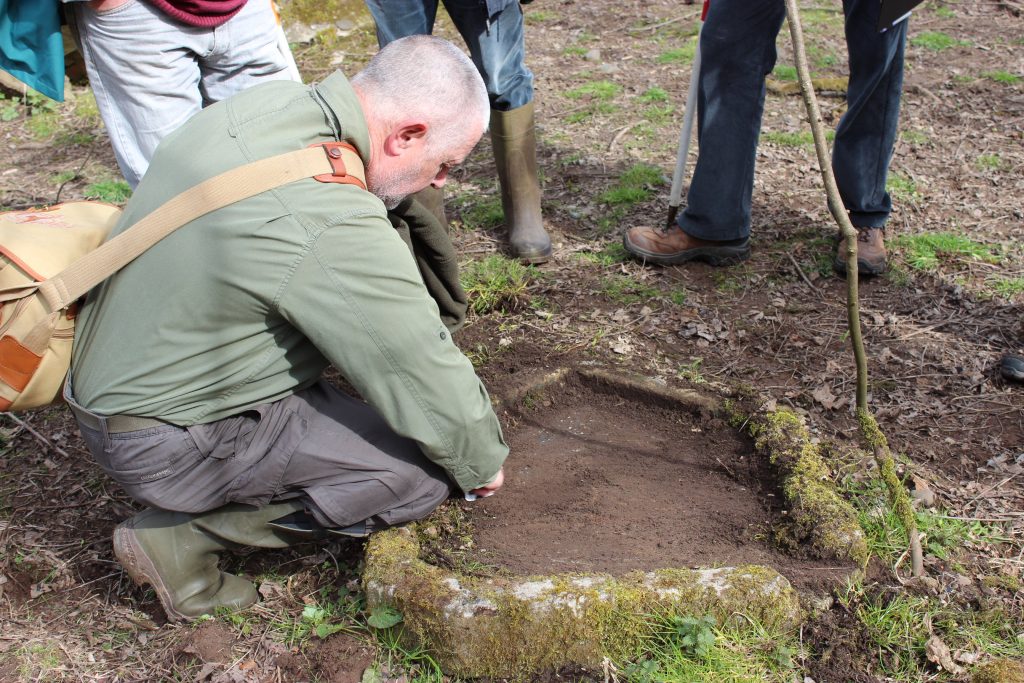 Little survives of the pens other than terraces in the slope and piles of rubble. Stamps on the bricks told us that they had come from Ayrshire’s Dunaskin brickworks at Dalmellington 50 miles away. 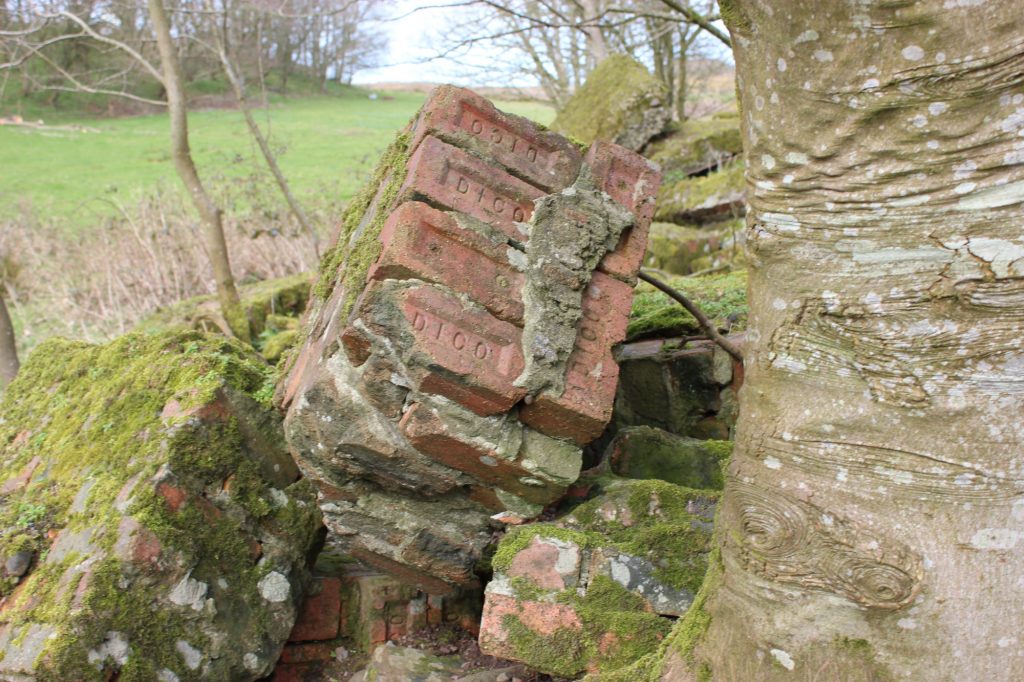 Nature reclaiming the remains of the military base. The rubble is from a demolished building, possibly a flying boat pen. The DICO stamp is for Dalmellington Iron Company, showing that the bricks came from Dunaskin Brickworks, part of the Dalmellington Iron Works.

Volunteer Bill Sandiford, who spent part of his childhood living at RAF Wig Bay in the 1950s while his father served as a flight engineer there, pointed out the site of his family home at the roadside. 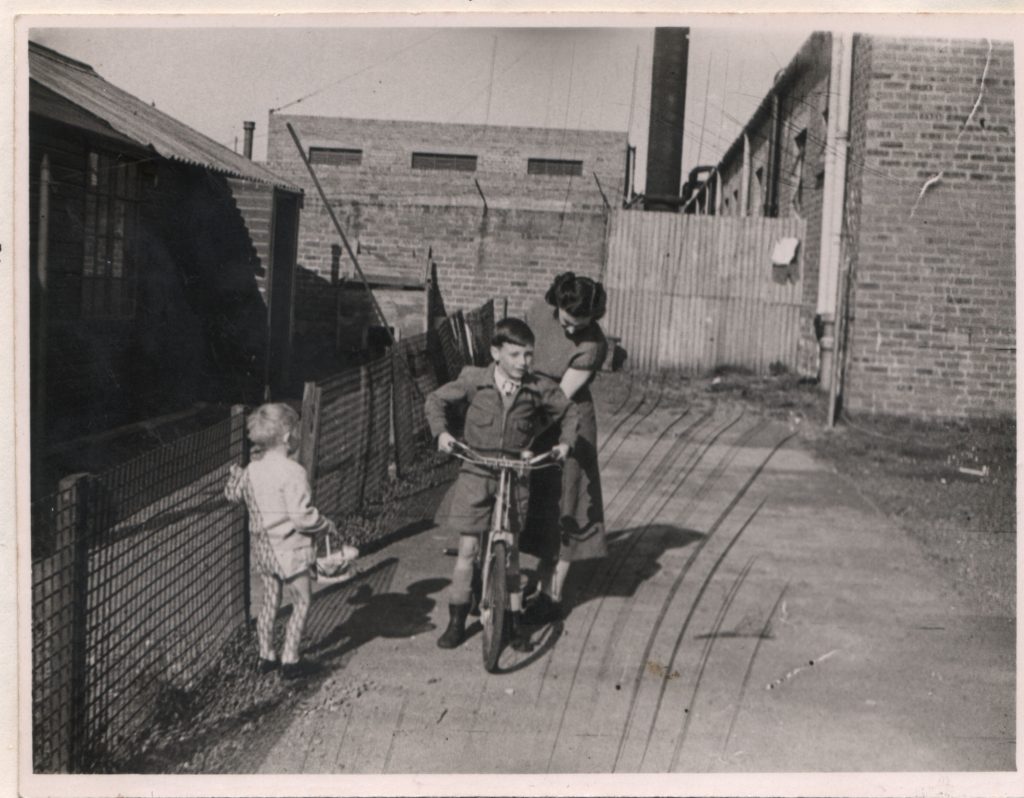 Bill Sandiford’s photo of family life at RAF Wig Bay. The family home is on the left, the boiler house is visible at the back, and the back wall of a maintenance hangar is on the right. 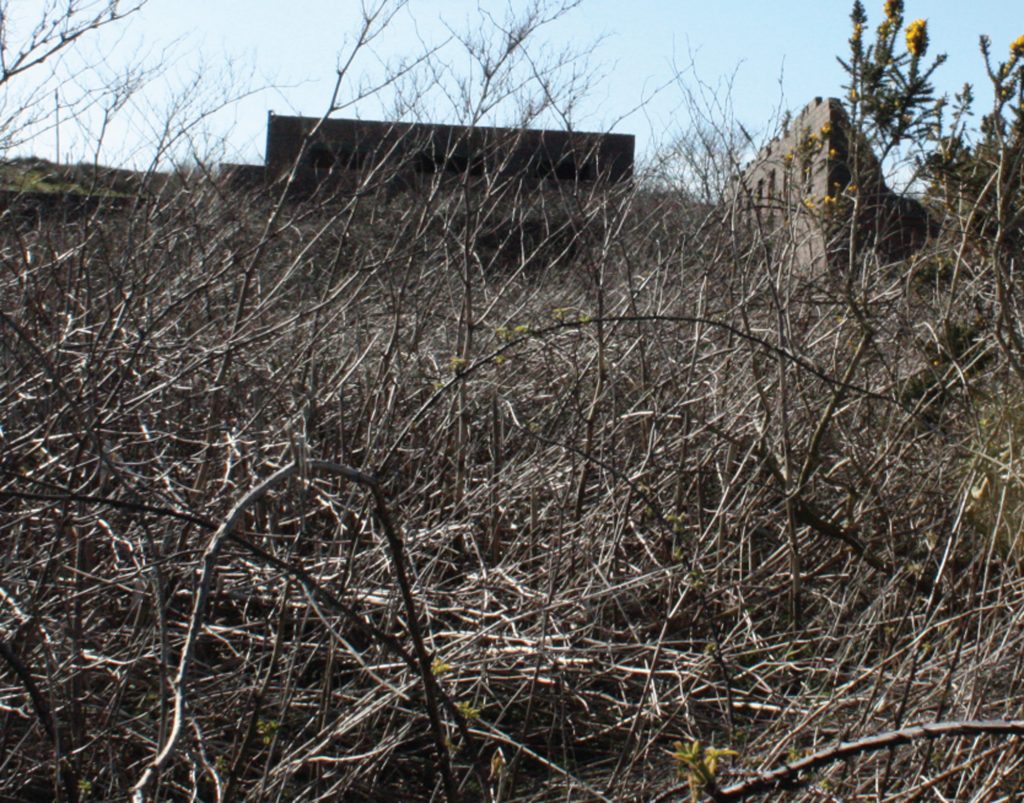 The same view, as it is now. The site of Bill’s family home is completely overgrown with an impenetrable thicket of vegetation

Although the site of Bill’s old family home is now completely overgrown, the boiler house next door, which heated the whole base, survives well. 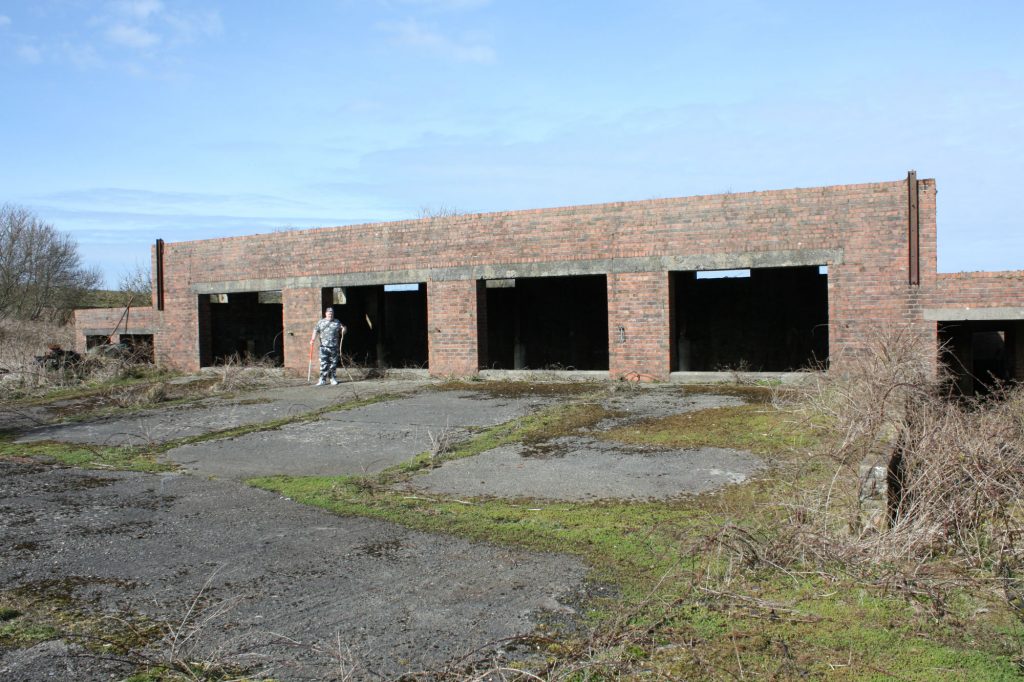 The boiler house at RAF Wig Bay, which heated the whole base from eight coal-fired boilers, via a network of underground pipes. The big openings in the front wall are where coal was delivered.

The next group of interesting remains is at Loch Ryan Sailing Club – in fact the club was established here to take advantage of the RAF’s slipway. A well-preserved workshop next to the slipway contains some great original features, including steel-topped workbenches and light fittings. 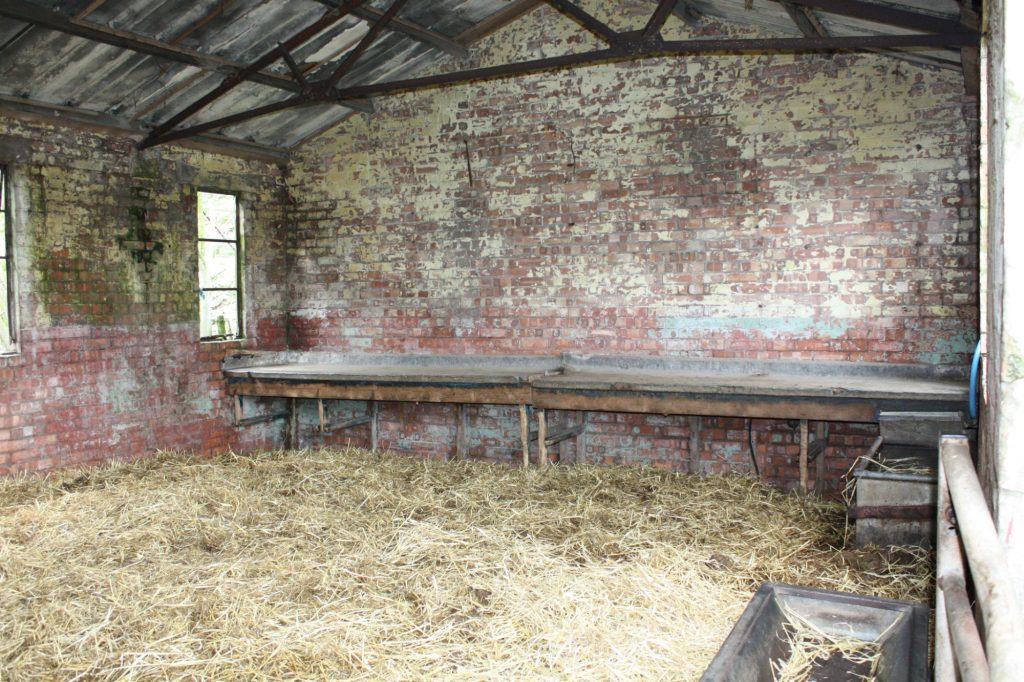 An original steel-topped workbench in one of the workshops, which we think may have been used to work on batteries, as the steel would be resistant to corrosive battery acid.

Volunteers Steve and Matt brought their professional electricians’ knowledge to bear on the original fuse boxes and wiring, even finding a working light switch. 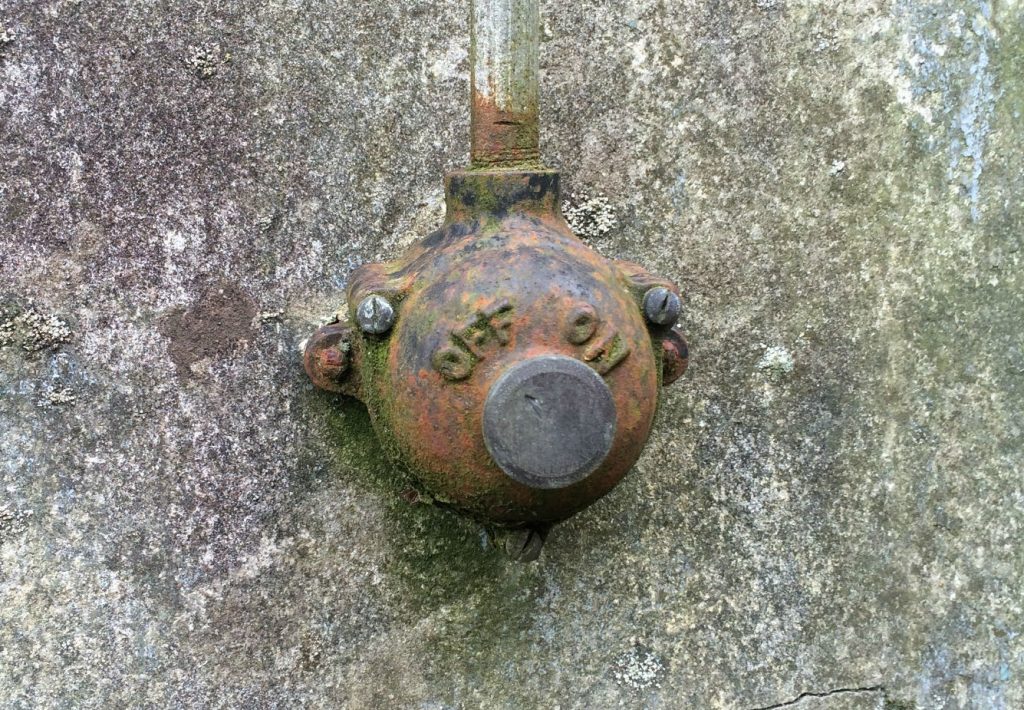 Volunteers Steve and Matt noticed that this light switch still works. Although there’s no bulb in the fitting, we could hear the clicking of the contacts inside the switch when the button was turned. This light switch was on the outside wall, suggested that whatever was stored in the cupboard may have been very flammable. Last used in 1957?

We were particularly intrigued by an area the RAF plan calls a “compass base”. There’s not much to see here except a flat area of concrete, so exactly what it was used for was a mystery to us until RAF man Ian explained that this is where the accuracy of navigation instruments was checked by towing the flying boats in a circle and checking their compass readings against measurements taken by a surveyor standing on the concrete. 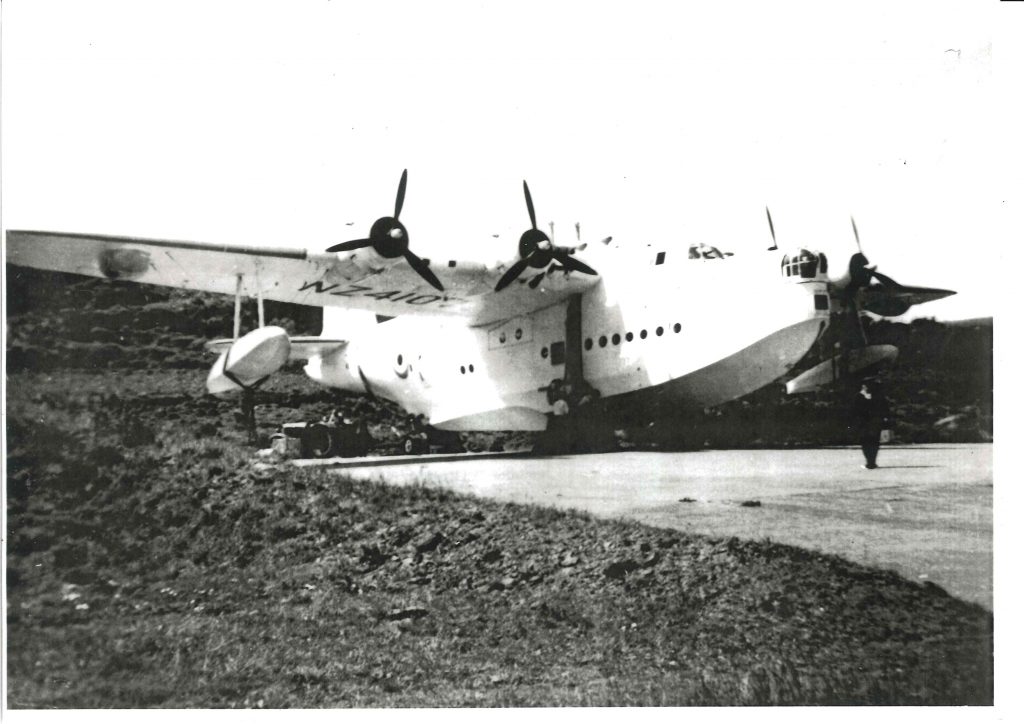 Derek Fitzgerald’s photo of a Sunderland flying boat sitting on the compass base. The tractor in the background would have towed it around 360 degrees while its compass was checked and adjusted.

Returning to Wig Sands, the area of RAF Wig Bay which first caught our interest two years ago, we looked at two concrete slipways which were used to haul flying boats out of the loch; initially for servicing, later to stand on the grid of concrete awaiting scrappage. 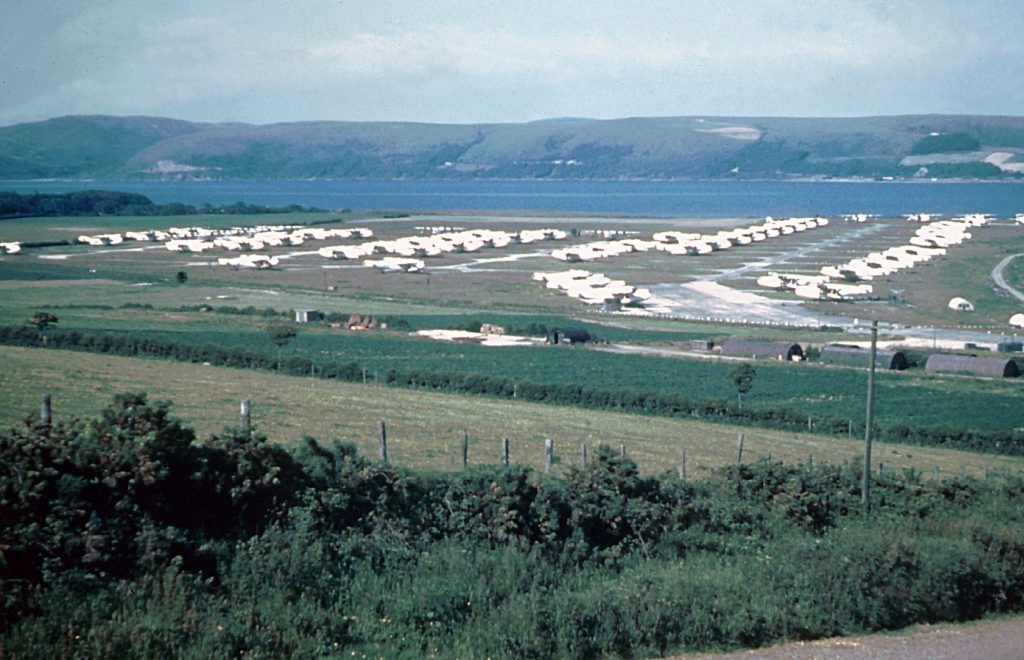 An early colour photo of Wig Sands in the 1950s, belonging to Donnie Nelson showing rows of Sunderland flying boats parked on the hardstanding waiting to be scrapped.

The survey of the remains of Loch Ryan’s flying boat base is nearly finished, and the next step is to celebrate its history. Local people have shared some great photos of the base when it was in use and when we return to RAF Wig Bay in the summer, we plan to work with local young people to recreate some of these photos and make a short video telling the story of the base and its flying boats.