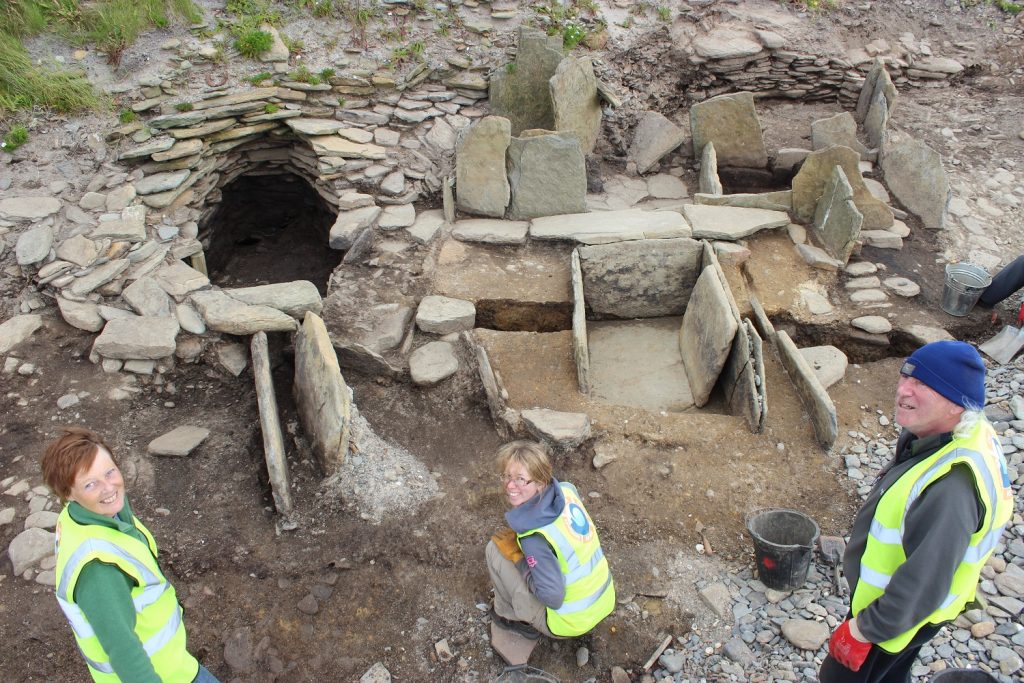 The burnt mound at Meur, on Sanday, Orkney, was first noticed after a severe storm in 2005 exposed a stone cist-like box. It was first thought it was a burial so a team of archaeologists was sent in to investigate.  The excavation revealed that this site wasn’t a burial monument at all, but a burnt mound dating to the Bronze Age, with a beautiful stone trough built of huge upright slabs. As well as the trough, the excavation uncovered stone paving, two stone compartments, a cistern for holding water, and piles of burnt stone.

Although this meant that there was no chance of finding human burials, the discovery was even more exciting, as no one knows what burnt mounds were used for. Stones were heated in a fire and used to heat up water in the trough, but we don’t know why. Theories about the function of these enigmatic monuments include cooking, bathing and saunas, brewing, wool production and boat-building. 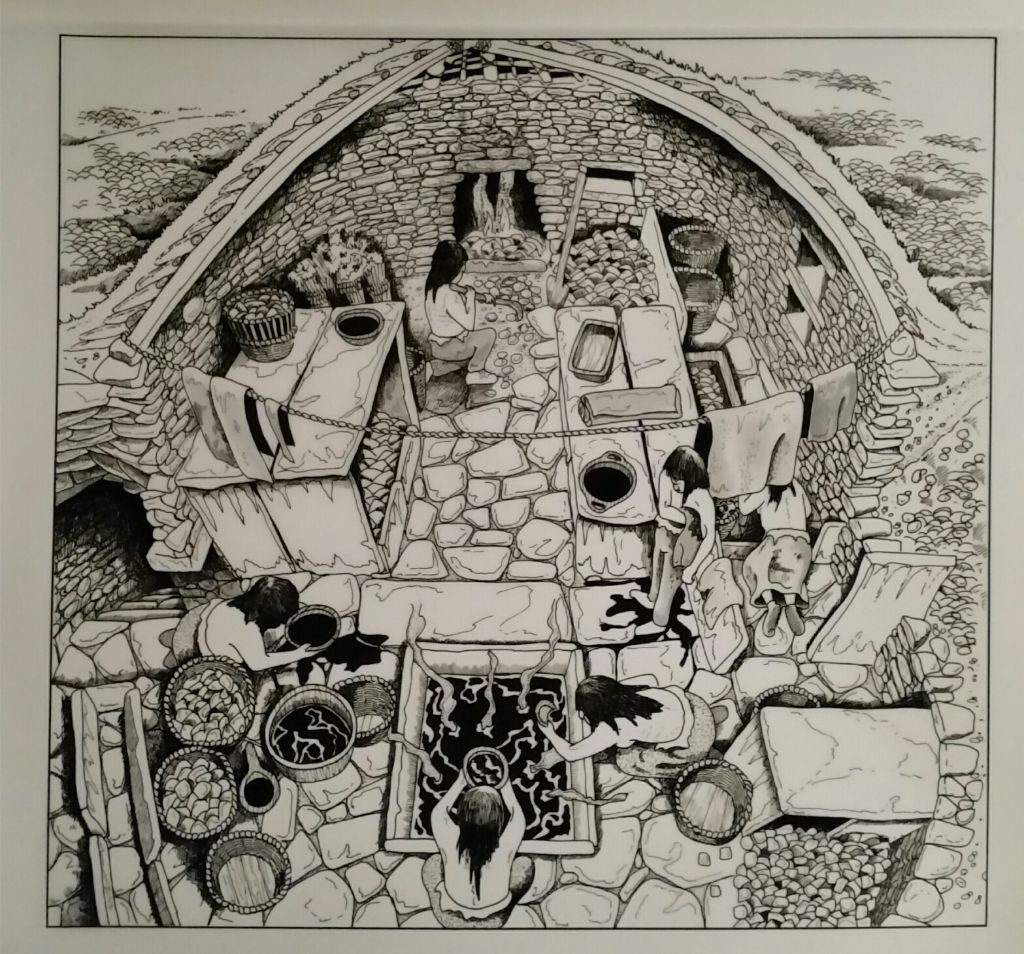 One interpretation is that burnt mounds were used to heat water for bathing. Drawing: Alan Braby

Storms over the winter of 2012-13 caused further erosion of the site, and damaged some of the structure. Worried that it might soon be destroyed, the community suggested dismantling the site, moving it and reconstructing it at a safe location inland, at the site of Sanday’s new heritage centre, which was due to open in Summer 2014.

So, over the summer of 2014, the Sanday community re-excavated the burnt mound and reconstructed the main elements at the new heritage centre. The site has been saved from the waves and is now a great attraction for visitors to the island and a learning resource for the local school. 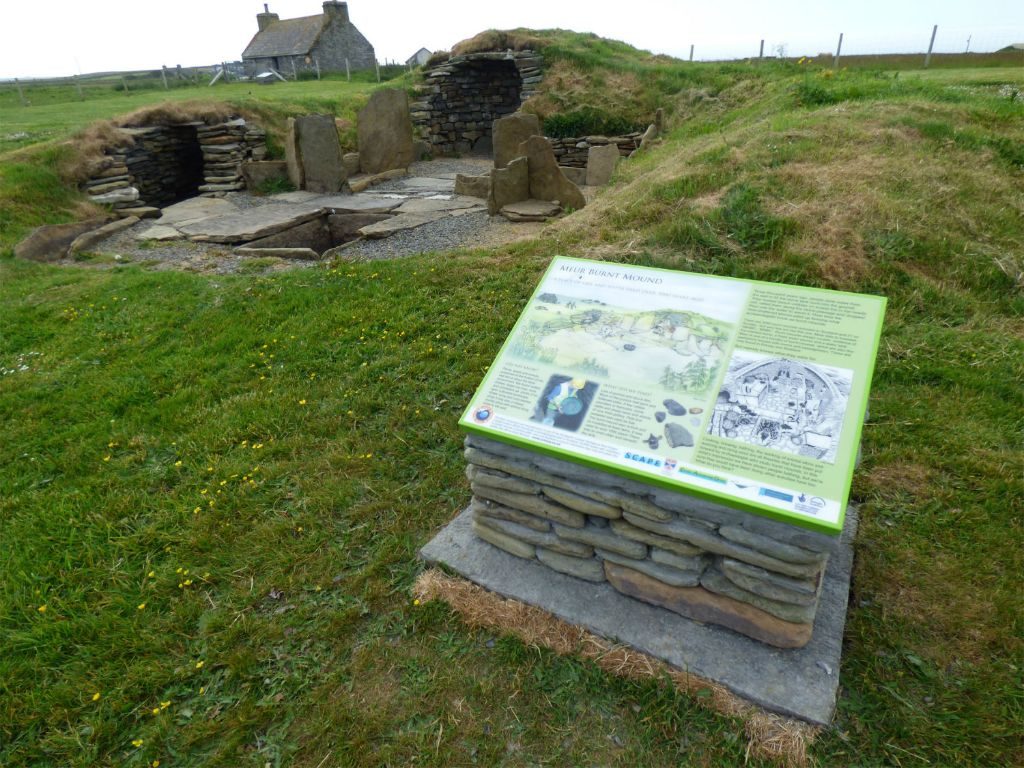 The re-excavation revealed that the cistern was in fact a Bronze Age well with steps going down into it. The well contained waterlogged and preserved organic material such as insects, wood and plant remains. This will give us very specific information about what was growing and living on Sanday around 3000 years ago. 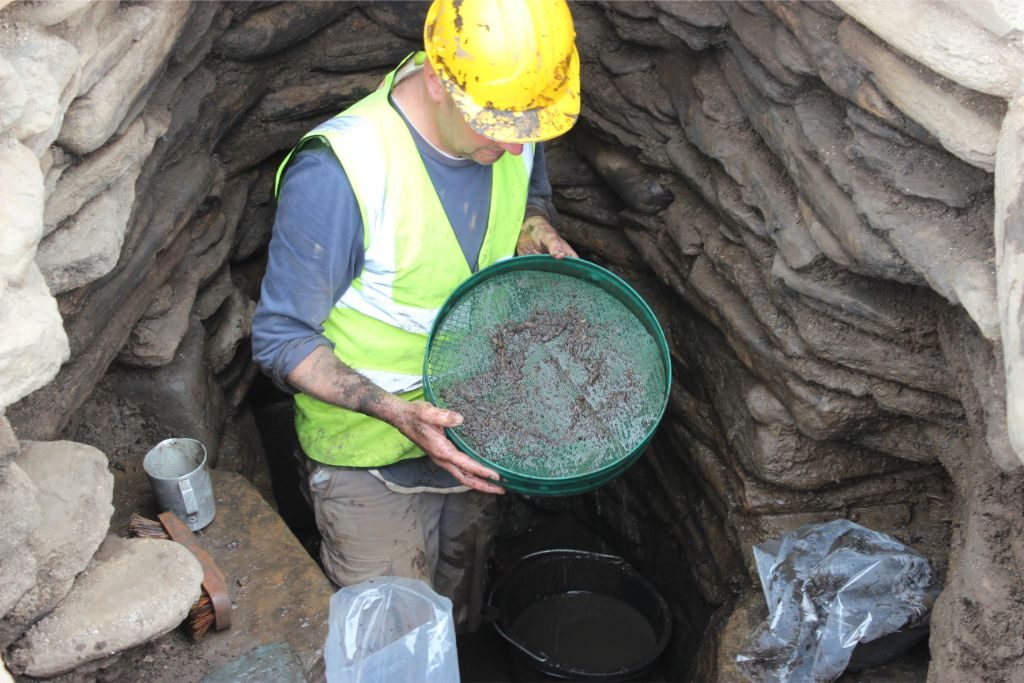 In 2015, further excavation revealed the hearth cell, tucked into the coastal section and separated from the tank by a short stretch of stone floored passage. As its name suggests, this was where stones were heated over a fire and probably rolled or pushed down the passage into the tank of water.

The final discovery of the dig was of an even earlier well which was directly beneath the massive base slab of the stone tank. Seeds found in this well date from 3336 to 3023 BC, the early Neolithic period. What is fascinating is that the builders of the burnt mound would certainly have known of the well. Its position directly beneath the tank was no accident and must have held some significance to the Bronze Age people who built and used the burnt mound over 1000 years later.

Analysis of the material recovered from the excavation is now underway and there will certainly be more discoveries yet to come.