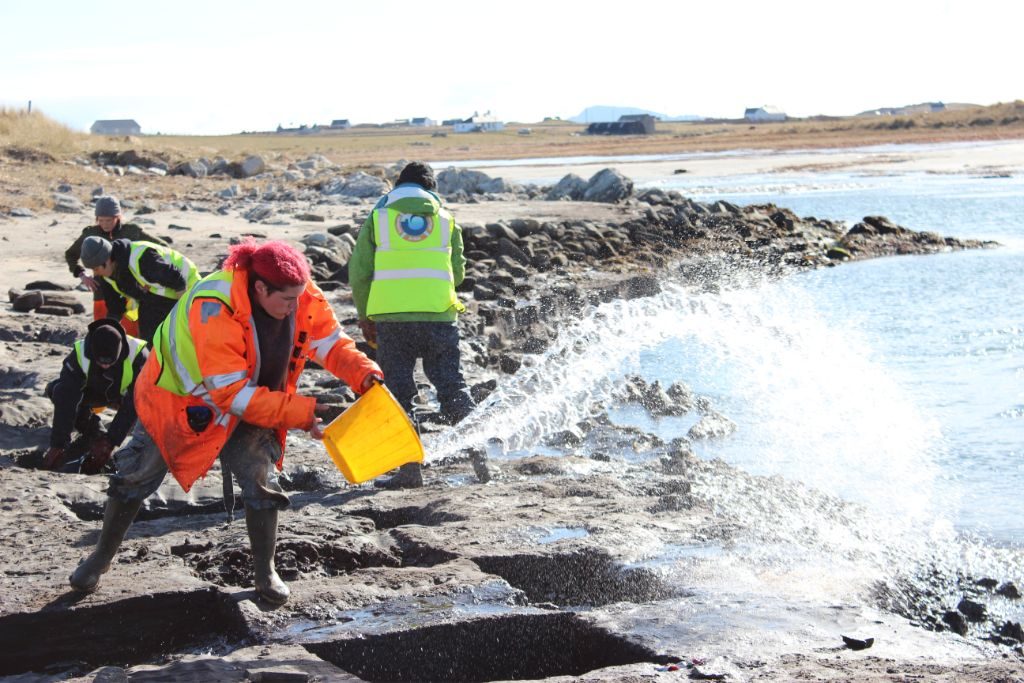 For some years local residents have been finding and reporting worked bone, pottery and wooden objects eroding out of a peat layer at the mouth of Loch Paible. These stray finds were associated with the possible remains of stone buildings and structures, including a fortified dun. Dun Steingarry stands on the promontory at the east end of the channel which drains the Loch, enclosed by a substantial stone wall. This channel periodically changes its course, and has recently moved north where it is cutting into the site. This erosion is causing large lumps of peat, and the archaeology it contains, to break off and fall into the sea at every high tide. 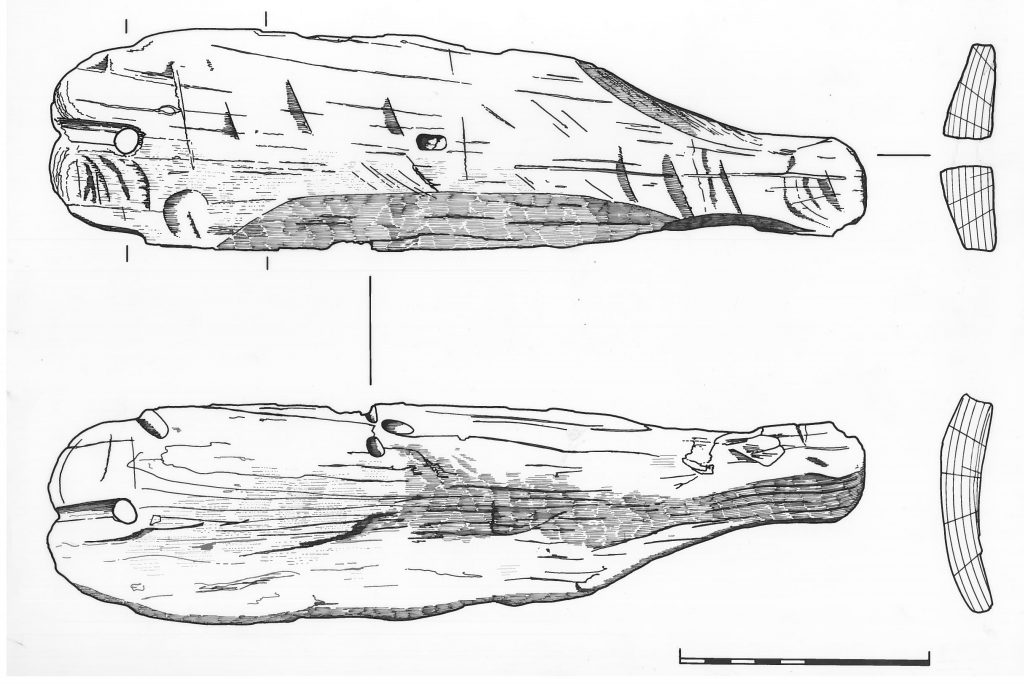 The Iron Age scutching knife, carved out of prehistoric driftwood from North America

As well as producing these fascinating finds, the area contained five of our high priority sites recorded in the Coastal Zone Assessment Survey of North Uist, and the rate of erosion has increased dramatically in recent years. Access Archaeology, the local archaeology society in North Uist, contacted us to see if something could be done to rescue information and artefacts from the site before it was too late. Supported by the Western Isles Council, the Loch Paible ShoreDIG in March 2013 was a community archaeological evaluation to find out more about the site.

Our evaluation strategy across the eroding peat shelf (in Areas 1 and 3) was to dig a series of metre-square testpits in the peat to characterise the archaeological remains without exacerbating the erosion or comprimising the stability of the coast edge further. Here, we identified several pits and shallow gullies or drainage ditches, probably part of an agricultural landscape or settlement.

Curving lines of stone in Area 2 appeared to form circular structures, but small trenches excavated across the possible walls showed they were very ephemeral features. If these do represent the remains of houses or other prehistoric structures, they’ve been very heavily damaged by erosion and the associated archaeological material has been washed out, leaving the lines of stones as ‘ghosts’ of the original buildings. 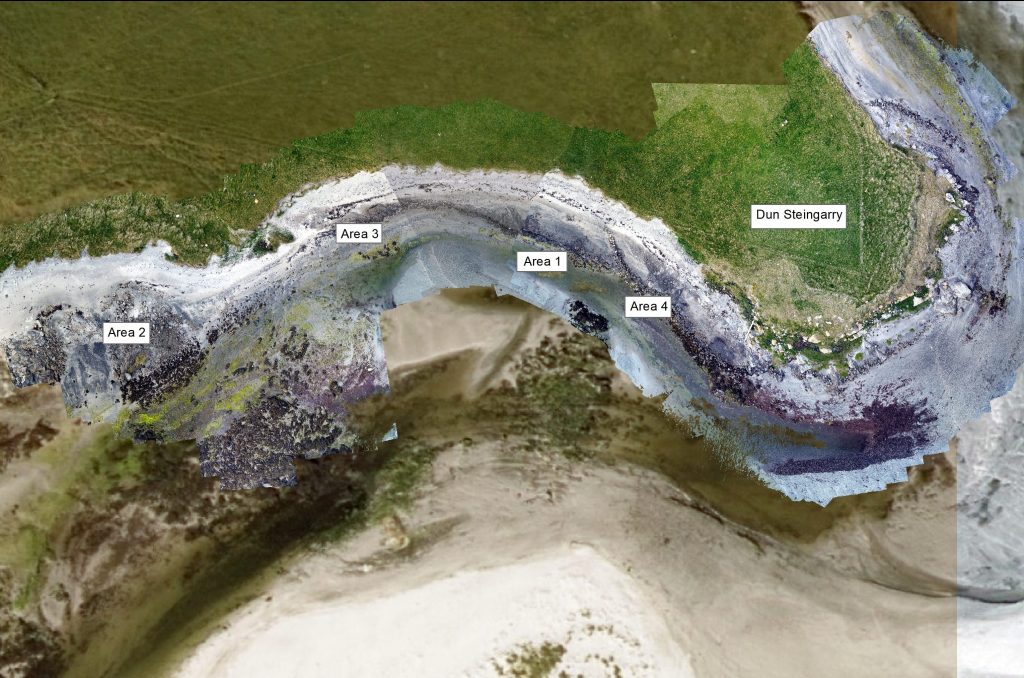 The most convincing evidence came from Area 4 where a trench investigated the substantial stone wall which encloses the grassy promontory of Dun Steingarry. On the shore of the Loch channel, stretches of this wall are built directly onto outcrops of bedrock, but it also curves around to the north where it is buried beneath the beach sands to continue inland around the promontory.

The waterlogged peat on the site created excellent preservation conditions for organic remains, and our fieldwork added over 60 fragments of wood to the finds that had been already recovered by the local community. Most of these were offcuts or splinters from woodworking activity, dating to the 2nd to 4th centuries AD, apparently representing a later phase of activity than the bowl and scutching knife carved from driftwood.

The fortification of Dun Steingarry appears to be later still – the wall which runs around the promontory has been built on top of peaty deposits which contain archaeological material, including wood, pottery and bone and which have been radiocarbon dated to the late Iron Age (351-536 AD).

Although the flax processing, the woodworking and the construction of the wall belong to three different phases of activity at Loch Paible, it looks as if there has been settlement and related agricultural and domestic activity here for several centuries through the mid-late Iron Age. However, the evaluation also showed that much of the archaeological deposits and structures had already been compromised or destroyed by erosion. 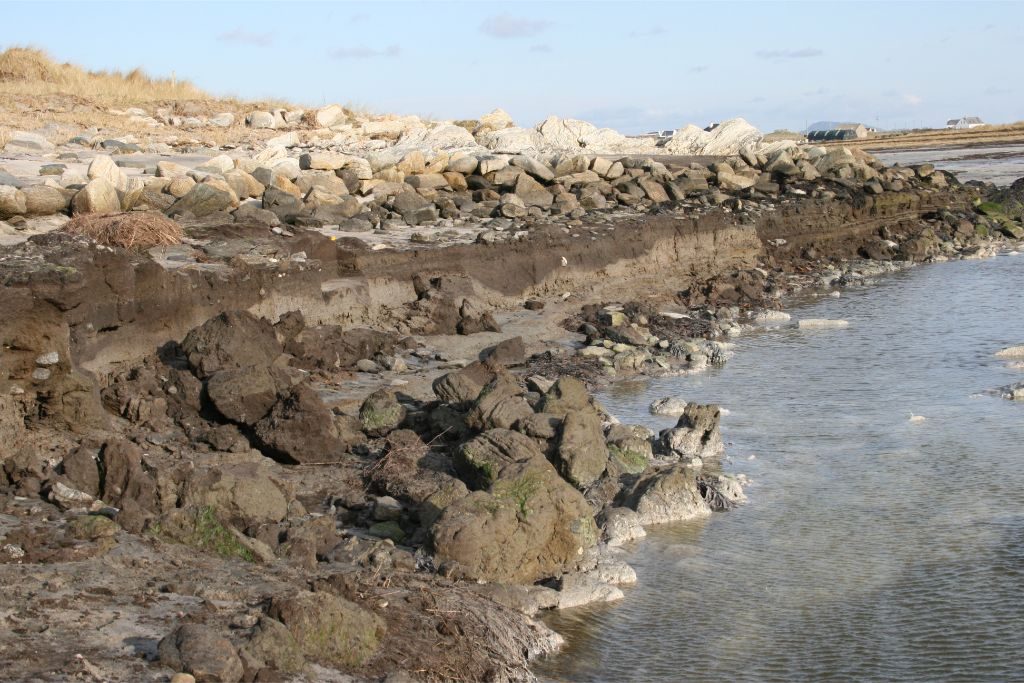 Our fieldwork at Loch Paible was only a single season but we’ve made several return visits in 2016 and 2018 to monitor the erosion and the site’s condition. Repeat drone surveys and mapping the coast edge regularly will help us to understand how the shore here is changing, and might result in the recovery of more finds or the identification of further structures that could be revealed by the processes of erosion.