Our third and final week 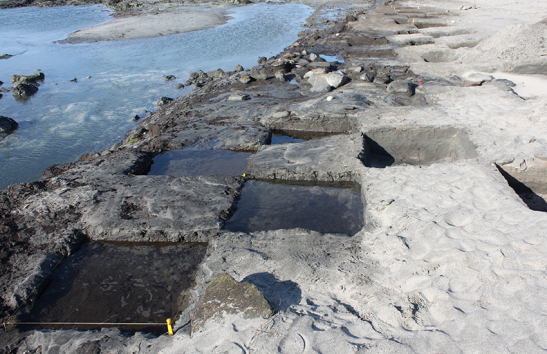 Throughout week 3, the moon was getting bigger – which meant that as each day passed, the sea started to creep up on our trenches. At the beginning of the week, the high tide reached the lowest of our trenches; but by the end of the week, all of the trenches were being flooded twice a day.

Luckily for us, low tide coincided with the middle of the day which meant that we didn’t lose too much time – although as the week progressed, we started and finished later each day. If we got to site too early, there was nothing to do but wait! 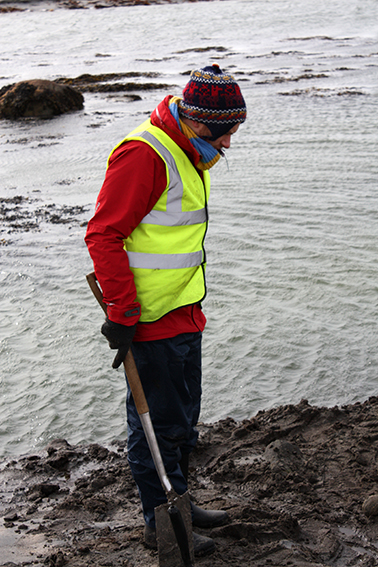 No use getting to work early!

Once the tide had gone out enough, we were left with water trapped in our excavation trenches… so the first job each morning was to empty them. 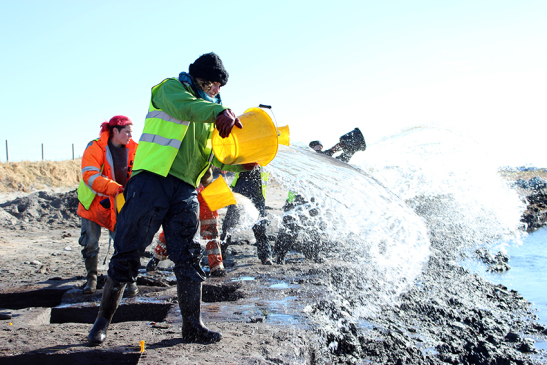 First job of the day

The bright weather continued to hold, and when the sun shone, the beach looked almost tropical. However, the reality was that it was biting cold, so everyone had to wrap up warm. 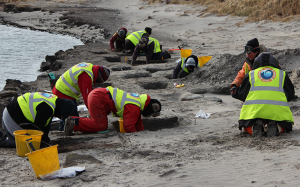 And you call this fun!

We continued to dig in Area 1 and started to find pits, gullies and other cut features. Some of these contained stretches of wall, such as this short line of masonry – with some of its stones set on their edge – which was held within a foundation trench. 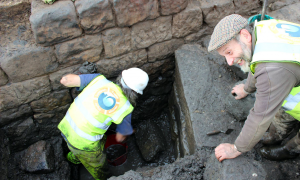 A line of stones…

..and the trench visible in the section

In general, the archaeological features were larger than the excavation squares we were digging. This meant that we were only able to uncover a small portion of the things we found. However, Emily managed to find a pit that was exactly the same size as her metre-square trench – if only archaeology was always like that! 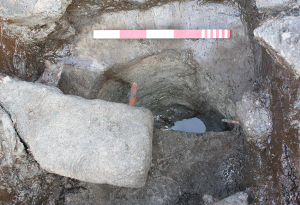 Excavated half of the pit that lay exactly within Emily’s trench.

Finding features such as this pit is very useful, as it contained a lot of pottery and bone which we can use to help date the site. In another feature, Rachel found an unusual piece of decorated pottery, with a grid of lines incised into it.

And later in the week, Catherine found the base of a pot when we opened up a line of trenches in Area 3, our final area for investigation which lies half way between the other two areas.

Rachel with her pot

We were all hoping that Catherine’s pot would be whole, but unfortunately not. However, it was a nice find and will help us to build up a picture of activity at the site.

We also continued to find pieces of wood. There were many fragments and off-cuts, but we also found some carved objects. For example, Tanya found this nicely worked piece of wood, which may have been some form of peg. 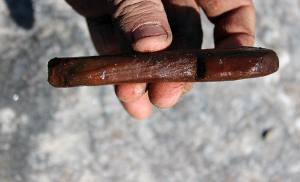 Side view of the carved wooden object

By the end of the week, we had finished three larger trenches in Area 2 and had dug 25 one-metre square holes in Area 1 and another five in the newly opened Area 3, where Catherine found the pot base. Natalia had dug two slots through the large wall that encircles the promontory, and we had drawn 20 metres of the coastal section.

So, what have we learned from all this activity?
Well, we will have to wait until we have completed the post excavation work before we can give definite dates to activity at the site, but we can see that as well as prehistoric finds, there is also pottery that looks Medieval (or later).

As for the large wall that encircles the promontory, our excavation showed that we were looking at its lowest courses, and it did not continue below the ground. This was the case for the other wall that we found in Area 1 – and it is possible that this second example is not a wall, but a causeway built when the ground was much wetter.

All the other stretches of masonry that we uncovered were rather insubstantial. In both Area 1 and 2, we found walls formed of stones placed on their edges. These walls could never have been very high, and appear to have been partitions or kerbs.

The problem is that – although we know there’s been a great deal of activity at the site – many of the upper archaeological layers have been affected by natural processes. Below these disturbed layers are a number of pits and gullies. These contained domestic rubbish, such as animal bone and pottery, but not in great quantities, so it is hard to imagine that they were simply rubbish pits.

So, we still have much to work out – and the key to interpreting the archaeological evidence is to understand the local environment at the time they were made. We know that this area is very dynamic and has changed many times over the years, affected by the sea, fresh water and the wind. 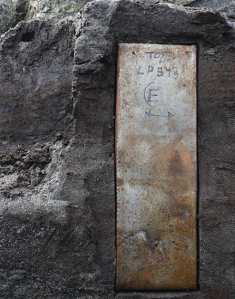 A Kubiena tin hammered into one of the sections 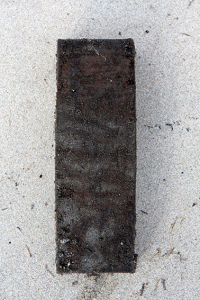 The same Kubiena tin after it has been removed from the section, showing the layers of soil which we will analyse back in the lab.

To determine how the environment has changed in the past, we have taken a series of soil samples. We hammered Kubiena tins into the sections so that we could remove the layers of soil. We will analyse these back in St Andrews to work out how the layers were formed. Key questions that need answering include whether different layers were laid down by wind or water, and if the latter, whether by the sea or within a lake or river. This will help us determine what the local environment was like at different times in the past, which will then help to explain why people built the walls and dug the pits and ditches.

After we finished on the final day, there was one last roll under the barbed wire fence, then we packed up the tents and headed for home. 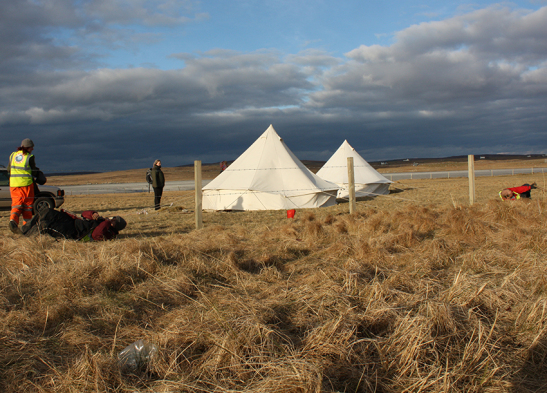 Rolling under the fence one last time

There is still plenty to do, and while we prepare the report, Access Archaeology members will continue to monitor the site and look for objects that are exposed in the eroding coast edge.

It has been a great three weeks and we are very grateful to Duncan at Balranald for allowing access to the site and for his help and interest. We would also like to thank North Uist Estate, SNH, and all the fantastic support and help from the local community- especially our volunteers: Catherine, Mari, Rachel, Sandi, Meg, Maggie, Margaret, Mata, Sabrina, Anne W, Anne MacK, Catherine, Morag, Suze, Jill, Lucia, Graham  – and from St Andrews; Alex, Lilli, Mark, Ben, Annelies and Frances.