Last week, we battled spring tides, which filled our excavation trenches with water twice a day. However, the pattern of tides changes quickly over a month – and in the second week the reach of the tide was 2 metres lower than previously – low enough to keep the site dry. This didn’t mean that we had things easy and we encountered a new, and unexpected, problem for a dig on a sandy beach – the excavation trenches started to get flooded by groundwater. This mainly happened in the test pits that were dug into the layers of brown peat that covered parts of the site. Water seeped through the sections and collected in the bottom of the holes until all the peat had been excavated away, allowing the water to drain freely through the sand. 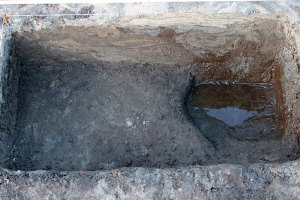 In Area 1, we continued digging small, 1m square test pits in a chequerboard fashion. One of the reasons for this odd style of excavation is that we are attempting to prevent additional erosion. If we excavated big trenches or opened up large areas, the sea would wash away the sand after we backfilled the site. Although the small squares are helping to retain the soil, it makes interpreting what we find much more difficult!

It is remarkable how different the things found in adjacent trenches can be. On one day, we had six people digging test pits in a line, one metre apart. Catherine found a small ditch in hers, Rachel hit organic sand, Mari found the edge of a gulley or pit containing peat, Becky only had peat, Anne only had sand and Suze found a wall! 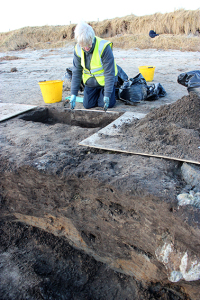 We spent the week uncovering Suze’s wall in Area 1, but it is not as easy as you may think to locate an irregular wall when digging test pits in chess-board fashion. Trying to predict where it would be found next was a little like playing battleships – and in several cases, squares where we were sure that it would turn up were empty of stone. As the wall was quite close to the surface (not much to backfill), we eventually decided to dig all squares that might contain the wall. Once uncovered, local artist Meg put her skills to good use and drew a fantastic plan. 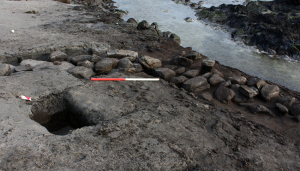 The wall uncovered during excavation in Area 1

In other parts of Area 1, the trenches are revealing quite deep deposits of sand mixed with a lot of silt and organic material, making the sand look very dark and peat-like. The layers appear to be quite disturbed, both by human activity and by natural processes. In other places, we are finding layers of real peat, but these deposits do not cover the entire site. Although we have lots of ideas about how the different layers built up – with some being formed by wind and others by water – we will need expert help to determine exactly what happened to the environment in the past, so we will be collecting soil samples next week for analysis back in the lab. 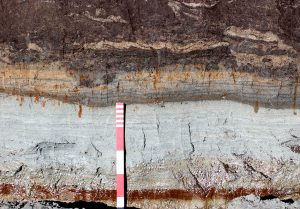 Layers of peat and sand

In Area 2, we’ve been concentrating on recording the stone structures uncovered last week. Tanya and Emily dug slots through areas of walling to try to learn more about the construction and use of the buildings. They found that the vertical stones set within the sand had been built within small foundation trenches which were packed with stones and sand to hold the uprights in place. 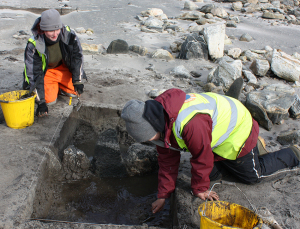 Tanya and Emily in Area 2

They also investigated a circular building that had been located during the 2005 Coastal Survey. It was built of large rounded boulders, but digging showed that there were no buried stones and the wall was only one course high.

They didn’t have much luck with their trenches – and in every case – they hit a layer of glacial till that covered the bedrock after just a few centimetres. The lack of surviving archaeological deposits in the area is most likely due to erosion that has impacted upon the site in the past, washing away walls and floors. The structures are a striking example of the damaging power of the sea on coastal sites such as this, both recently and in the past. 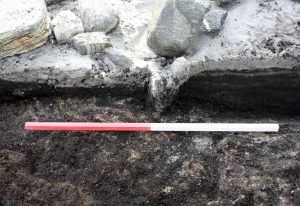 Till and bedrock just below the surface

Natalia spent the week working on the large wall at the eastern end of the site. This wall has only been uncovered in recent years, but is already in danger of collapsing as it is being undercut by the sea.

There is a hill at the tip of the promontory and the antiquarian Erskine Beveridge thought that there was a dun (an Iron Age building) buried within this mound. The wall Natalia is working on goes right around the promontory (and mound) and its two ends disappear into the sand. Natalia dug a trench to see if the wall stops or continues under the sand – and she found that the wall appears to head inland at either end, which indicates that it probably encircles the hill. 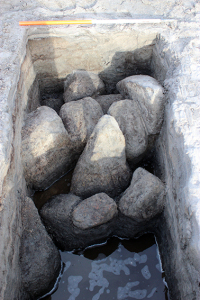 Natalia’s trench – uncovering the wall buried under the sand

This is a busy time of year for people in the Western Isles, with many people involved in lambing and other crofting work. However, the turnout at site has been great and we are thrilled to have so much help from local volunteers. We were also joined by Ben from St Andrews and Sabrina, an archaeology student from UHI in Stornoway this week.

Access Archaeology organised a talk at Paible School and there was a large turnout to hear about the project – and our previous community dig at Baile Sear – just south of Paible. Tom and Jo both spoke, but the highlight was Tanya telling everyone about the bones that had been found at Baile Sear, especially the human remains that had been buried within the Iron Age building! 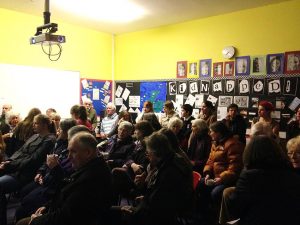