Nowhere more than in Shetland, have we seen the power of the last two winters of storms to reveal new coastal archaeology. The relentless easterly gales of 2013 and 2014 hit the coast of South Mainland hard. When the seas abated, two incredible sites were revealed. The mass of stone in the picture below is actually a half sectioned building, probably dating to the Iron Age. Its existence was completely unknown until 2013. 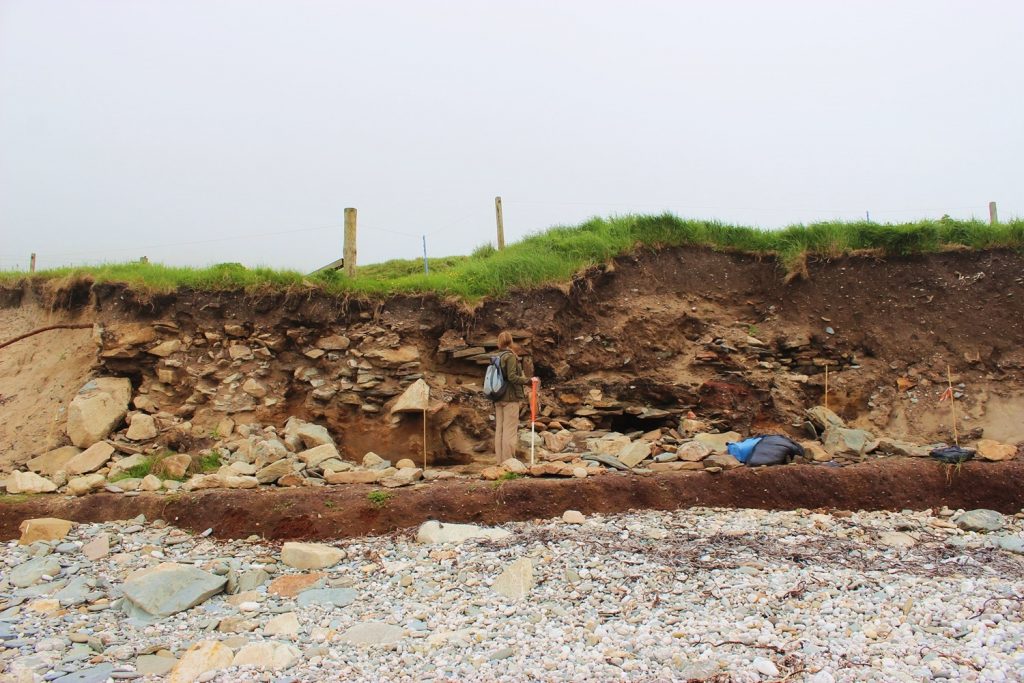 Ellie is looking at a building at Channerwick half sectioned in the easterly gales of 2013 and 2014. It is probably Iron Age and could be a substantial wheel house, or even a broch.

At the left of the image you can see a section through a massive external wall. The wall is faced with blocks of white granite that outcrops at Channerwick. The granite is rich in mica and quartz, and so this great wall would have sparkled in the sunshine. To Ellie’s right you are looking at the inside of the building. There is a central subterranean corbelled chamber, surrounded by what look like stone piers which form the spokes of a typical Iron Age wheel house. The red and dark coloured layers are formed of peat ash and charcoal and contain lots and lots of bone and pottery.

A few km up the coast, the easterly gales have laid bare the coast edge along the Sands of Mail. Layers of peat ash and archaeological material, along with the remains of massive stone walls have been exposed over a distance of at least 150m. 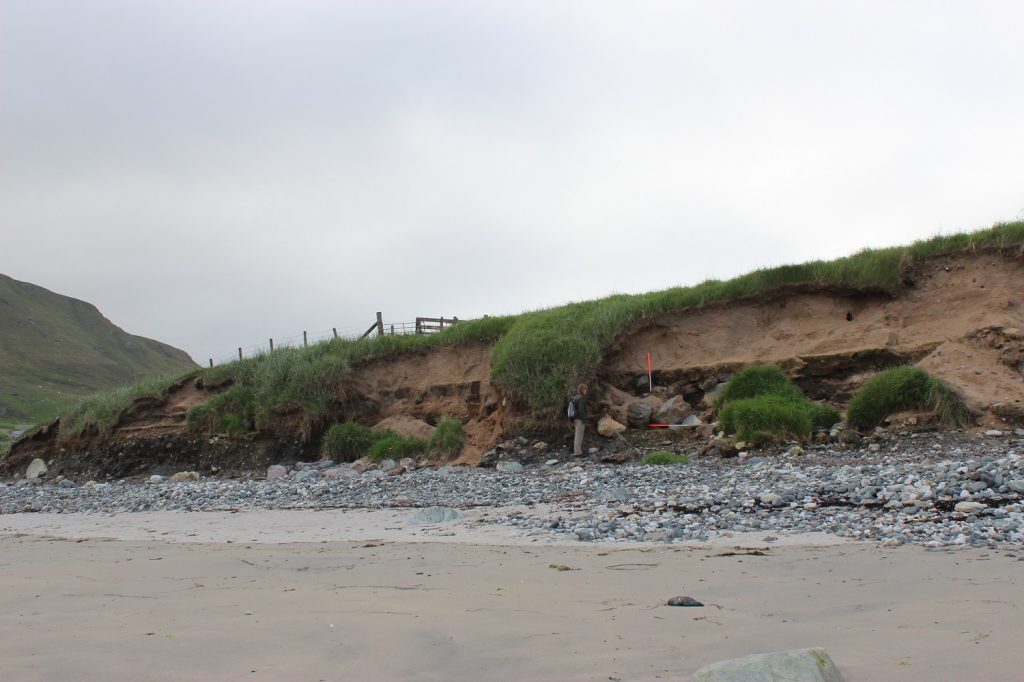 Archaeological deposits in the eroding section at Mail. Ellie is standing in front of a structure constructed with massive stone blocks.

It is difficult for a photograph to capture the sheer scale of the archaeology revealed. Above, Ellie is standing in front of a structure built from enormous blocks of stone. And look here, nearly half of a pot, crushed into the till at the base of the Mail section. 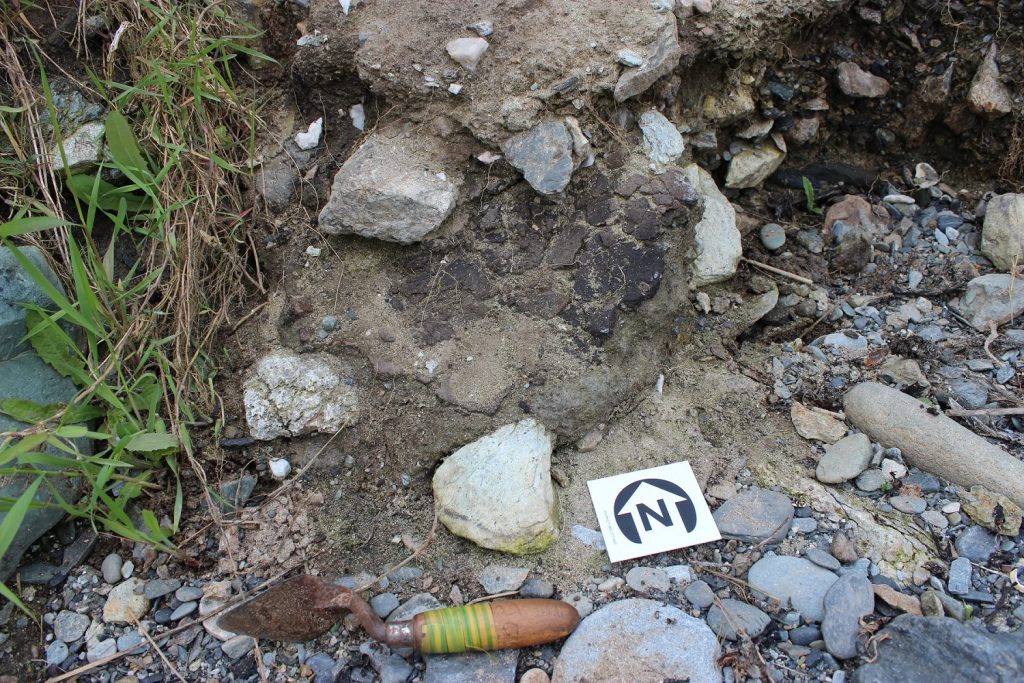 The side of a broken pot eroding out of the base of the archaeology in the section at Mail.

The last time this site was revealed was in 1881 when the Reverend George Clarke noted steatite vessels, a quern and a quantity of charred grain in the sand dune below the Manse and Free Church. This was likely to have been after a similar sequence of easterly gales.

From a distance, Levenwick Broch appears as the highest hill of rubble amongst great mounds of angular boulders. These are storm beaches located on a high rocky cliff. 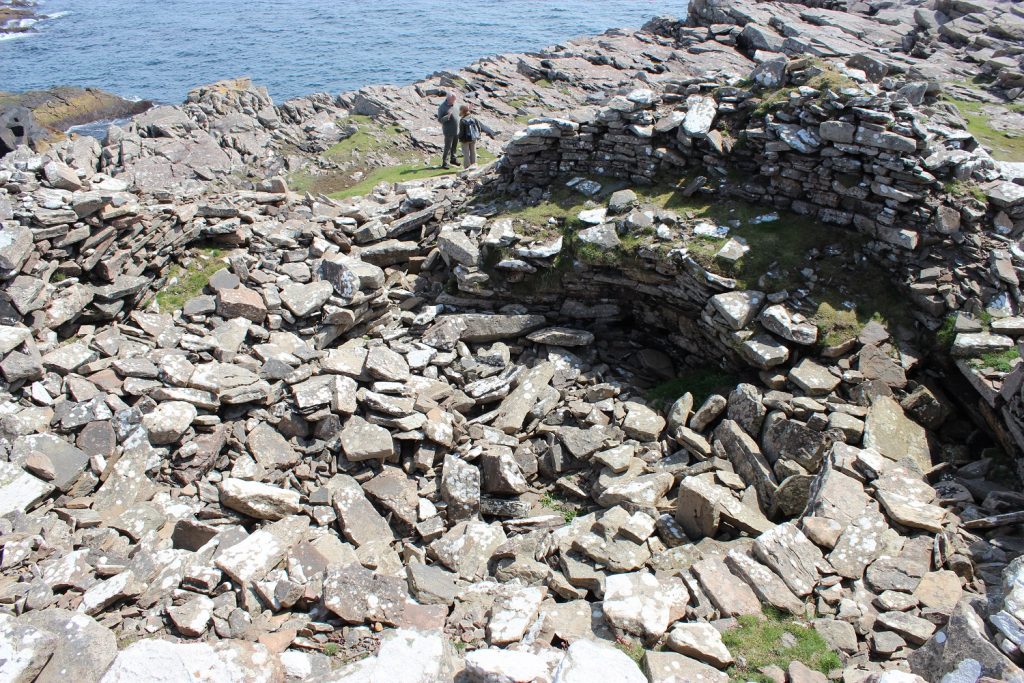 Looking into Levenwick Broch. You get a sense of scale from Jim and Ellie in the background.

On a calm sunny day it is difficult to imagine the strength of the waves that threw these boulders up from the shore. The broch builders took advantage of this abundance of building stone, and it is no surprise to find a broch guarding a headland every few km along the east coast of South Mainland. 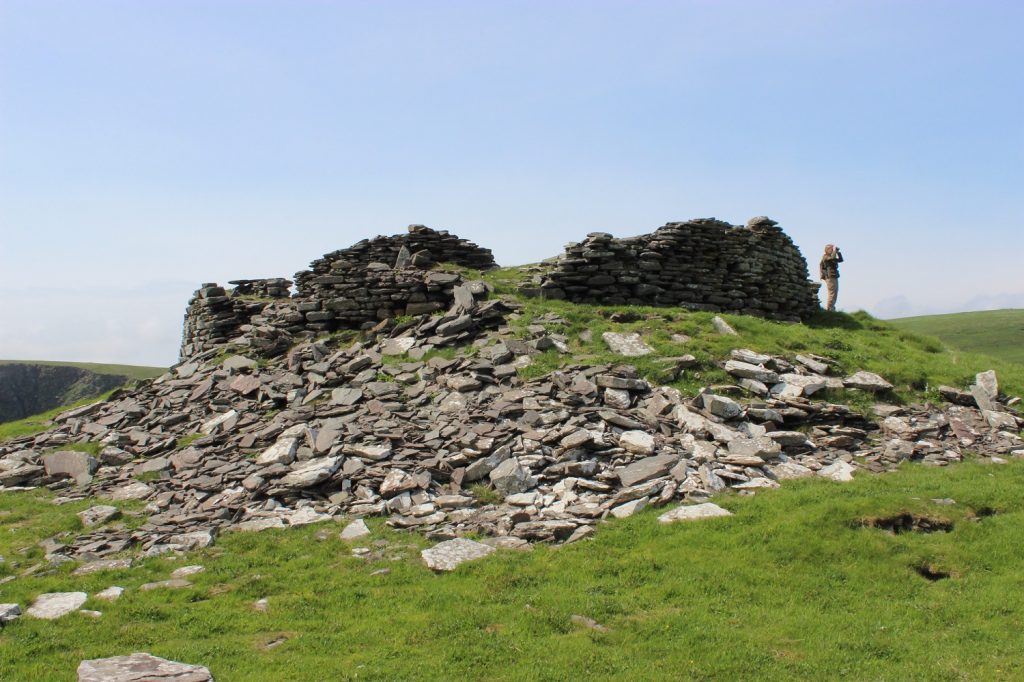 As always, it’s the people we meet who make our journeys around Scotland’s coasts so enjoyable. Many of you in Shetland told us about sites in your area and volunteered your time to show them to us and to learn how to help monitor and record this amazing archaeology. 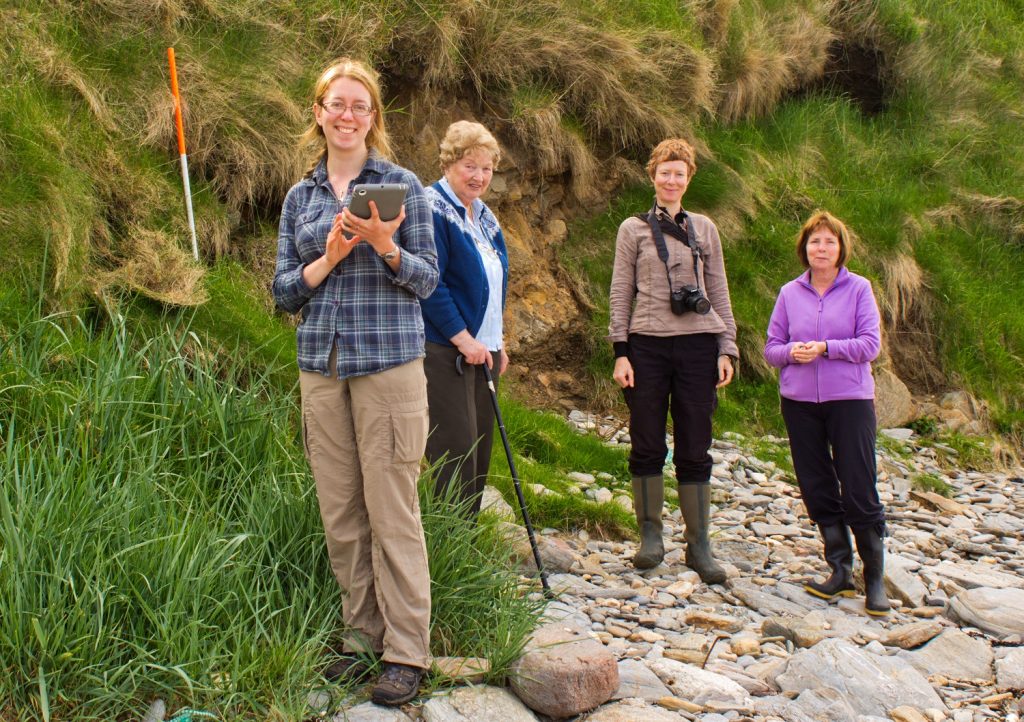 With the support of the Shetland Amenity Trust and the people of Shetland, the archaeology is in good hands. 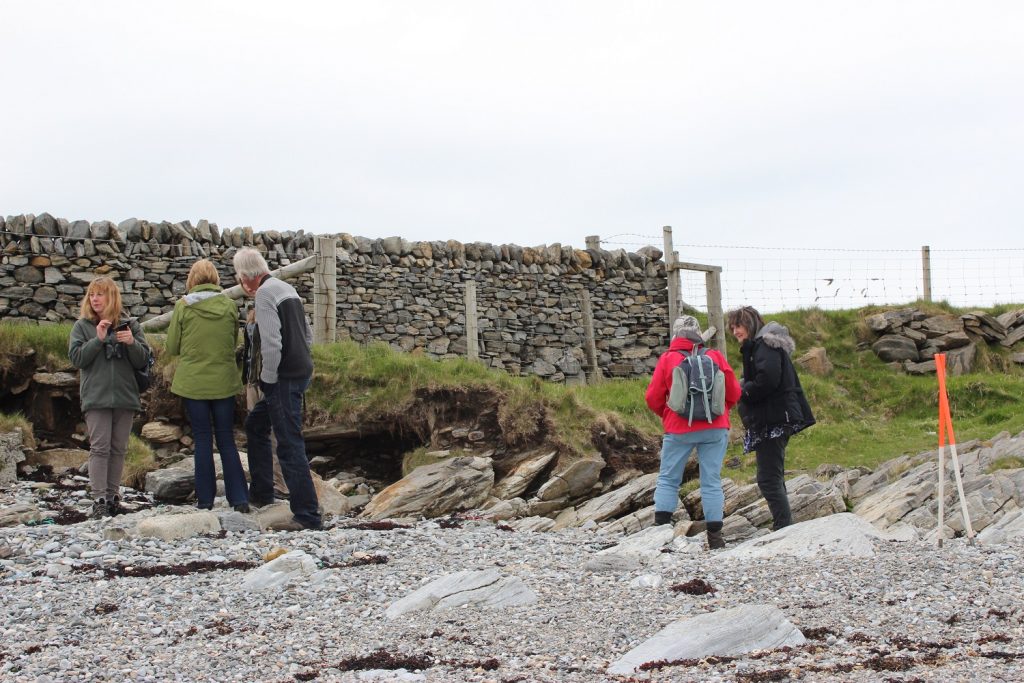 Plenty to discuss as always on a ShoreUPDATE field trip.

We found time to hop on the Bressay ferry to visit the reconstructed Cruester Burnt Mound at the Bressay Heritage Centre, one of our projects from 5 years ago and still looking great. 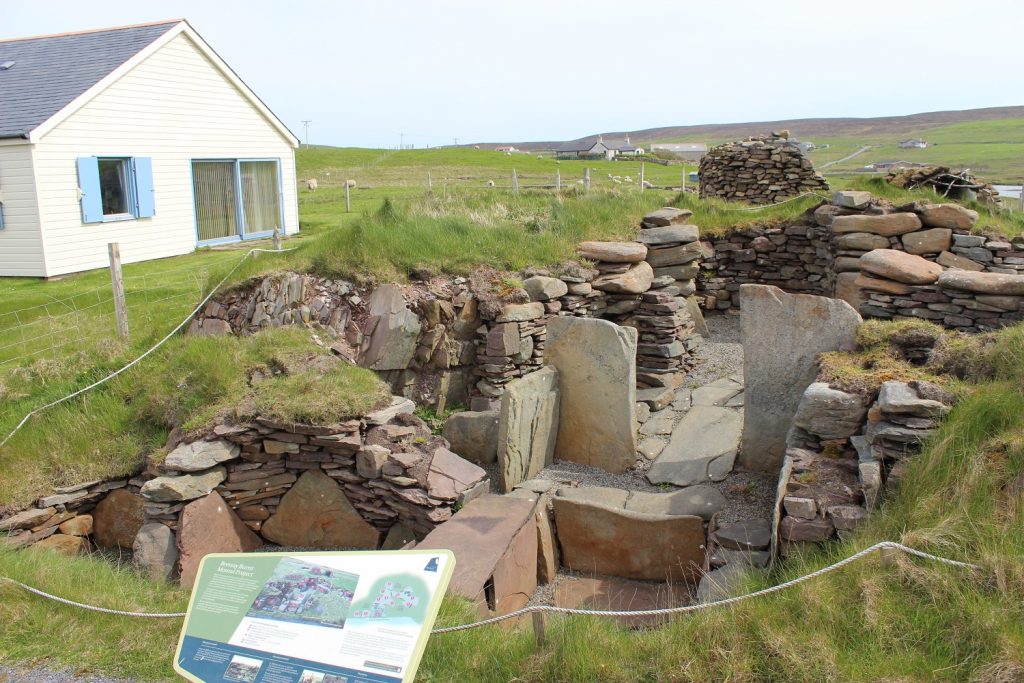 A similar project on Sanday in Orkney will be keeping us busy in July where with the help of the Sanday community, we will be excavating and reconstructing a burnt mound from the beach at Meur to the new Sanday Heritage Centre.