From stones to bones: studying Scottish coastal change with SCAPE and Dynamic Coast

Eroding coastal heritage sites documented by volunteers through SCHARP are valuable because they are based on field observations so are true records of what is actually happening at the coast. This means we can use them to test or validate models of coastal vulnerability and change.

From January to April this year, we had the opportunity of putting this into practise in a joint project with Dynamic Coast. Thanks to funding from the University of St Andrews, we had the pleasure of working with Sarah Boyd, PhD student and GIS wizard! Sarah’s blog reflects on her experience in this very productive and enjoyable collaboration.

As a second-year geology PhD student in the School of Earth and Environmental Sciences (SEES) I spend most of my time studying post glacial sediments and land movements around Scotland. 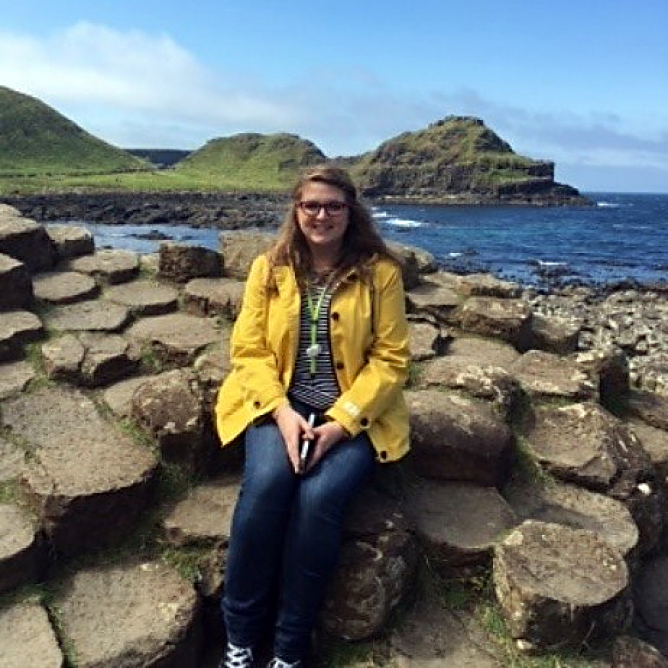 Scrolling through my daily emails, I came across an advert for a GIS (geographical information science) placement focusing on Scottish coastal erosion, funded through the St Andrew Knowledge Exchange and Impact Fund.  Interested in expanding my research network, utilising GIS skills that I have gained from my Masters degree, and the opportunity to learn more about the discipline of archaeology, this seemed like the perfect fit for me.

From late January to early April this year I undertook the internship with The SCAPE Trust, who are based within the Department of History here at St Andrews.  Additional partners included Scottish Natural Heritage and Historic Environment Scotland.

Scotland has a long and varied coastline and therefore it is vitally important to understand how Scotland’s coast has changed historically and how it could evolve in the future with a changing climate. National models have recently been produced to describe coastal erosion susceptibility of Scotland.

This project involved using a coastal heritage dataset of archaeology sites which are actively eroding to assess two national models of coastal change for the purpose of archaeological management; the Coastal Erosion Susceptibility Model (CESM) and the National Coastal Change Assessment (Dynamic Coast NCCA).  The CESM divides Scotland into a series of 50m grid cells and ranks them from very ‘low’ to ‘very high’ erosion susceptibility.  The Dynamic Coast NCCA uses the differing positions of Mean High-Water Spring (MHWS) over time, extracted from historic and modern OS maps, as a proxy for coastal change (erosion or accretion).

The Scottish Coastal Heritage at Risk Project (SCHARP) is a SCAPE project which involves surveying and recording archaeological sites around the coast of Scotland which are each assigned a priority rating based on how at risk of erosion the site is.  There are over 13000 sites recorded however I focussed my analysis on a shorter list of 122 high priority sites – sites with both a high archaeological significance and high risk of active erosion. 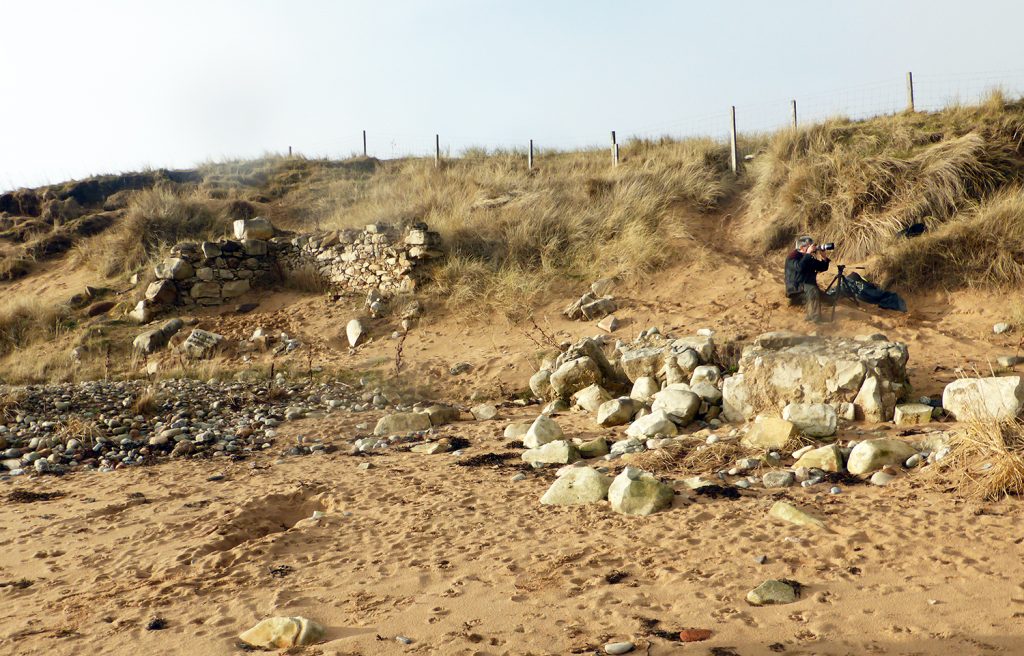 An example of a salt pan building in Brora that I visited with the SCAPE team in January 2019. Taking advantage of the presence of Jurassic coal and abundance of sea water due to the coastal setting, Brora cultivated an industry in salt production which continued into the 19th century. Due to coastal erosion, this salt industry heritage is fast being lost to the sea. This site is a high priority on the SCHARP database.

Using GIS, these SCHARP sites (known to be on eroding stretches of coastline) were mapped and intersected with both models to show if both the models and the site data agreed that sections of coast are eroding.  To further explore the methodology, a case study was carried out on Sanday, Orkney to delve into the details of each model and to develop a complimentary model of coastal change in the form of a vegetation edge analysis. This involved digitising the position of the vegetation edge from historic maps and aerial photographs and creating lines describing the change, i.e. the amount of accretion or erosion, between selected time periods.

No model will perfectly describe every small section of the coastline but the local scale vegetation edge analysis of coastal change had a higher agreement with the eroding archaeology sites than either of the two national models.  When used together it is possible to achieve a clearer view of which areas are most at risk of erosion and therefore at risk of cultural heritage loss.  By combining results from all of the models, the outputs can be used as a starting point for coastal heritage management and to inform future coastal survey. 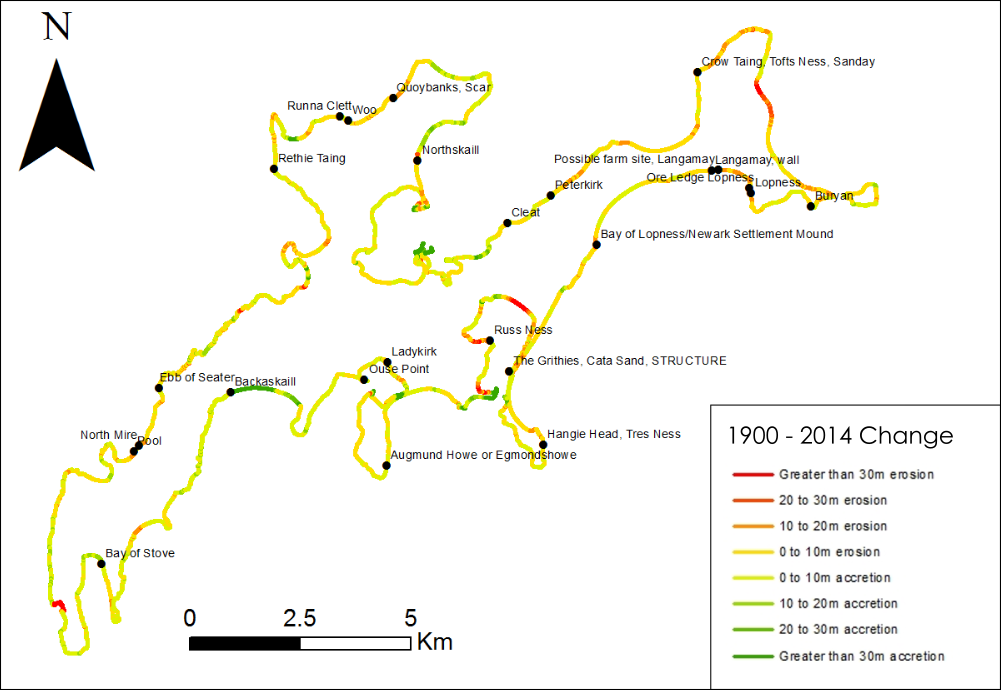 Example of vegetation edge analysis output for the island of Sanday, Orkney. Areas of coastline in oranges and red indicate stretches of coastline which have seen net erosion between 1900 and 2014 and areas of greens and yellows indicate net accretion. The 25 sites indicate sites which are high priority, both in terms of archaeological significance and risk of erosion.

I didn’t spend all three months indoors and in addition to the main desk-based GIS project I took the opportunity to join the team on fieldwork in Brora, the Solway coast, the East Neuk of Fife and the Wemyss Caves.  These trips spanned a breadth of archaeological time, from Pictish carvings in East Wemyss (check out the 4D Wemyss Caves website to have a look at these) to WWII pontoons at Cairnhead Bay which were utilised as part of top-secret D-Day preparations. 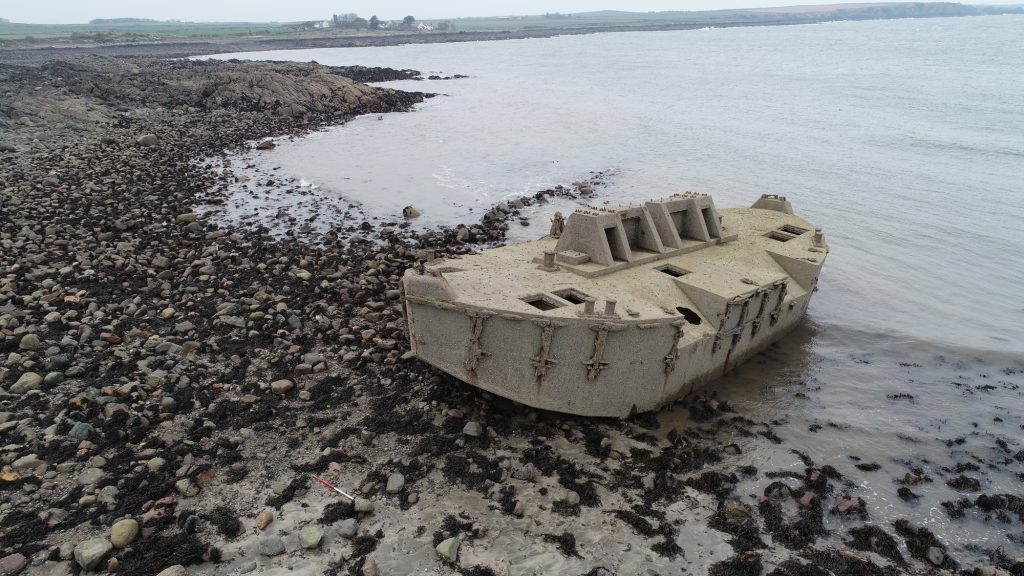 Cairnhead Bay, near Garlieston on the Solway coast is the final resting place of this hollow concrete pontoon, known as a “Beetle”. These were used in D-Day preparations to support floating roadways.

My favourite archaeological site visited during the placement was the East Wemyss caves with their Pictish and early Christian carvings. The photograph on the left is from the Court Cave which includes carvings of a bird and double discs. The photograph on the right is of the Doo Cave with unusual box like ledges carved out of the rock for nesting pigeons.

One of the main objectives of The Knowledge Exchange and Impact Fund internships is to build relationships between external organisations and the university.  This internship was valuable as it not only allowed me to develop links with Scottish Natural Heritage and Historic Environment Scotland but also between SCAPE and SEES within St Andrews. 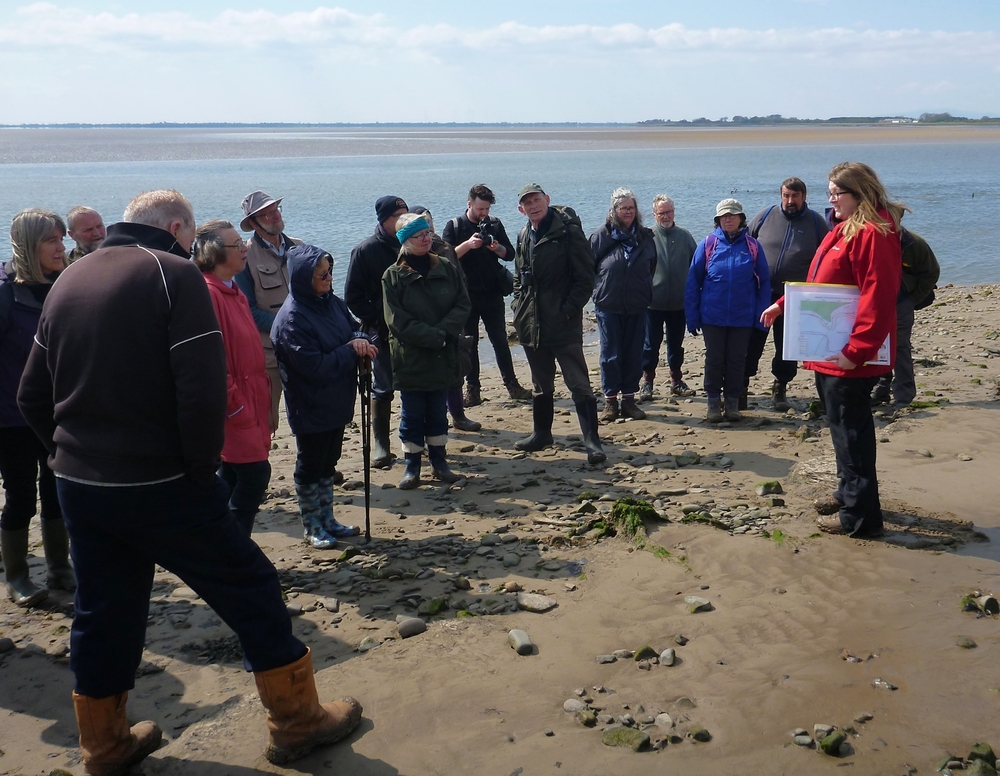 A public coastal walk allowed me to incorporate some of my own research interests when we discussed coastal changes over the last 8000 years at Redkirk Point on the Solway Firth. This was one of three public walks in the Solway Firth region with SCAPE in collaboration with the Solway Firth Partnership.

This internship was a great opportunity to use my skills on a different project for a three month period within my PhD and demonstrated how the skills developed within a PhD can be readily transferable to work on a wide range of research areas.  It allowed me to build upon my GIS skills and add to the conversation of coastal change, as well as learn about the rich and varied archaeology of Scotland!