Britain at Low Tide – Behind the Scenes

The second series of Britain at Low Tide (Channel 4) features two episodes filmed in Scotland, and the programme is a great opportunity to show off some of our stunning Scottish coastal archaeology. 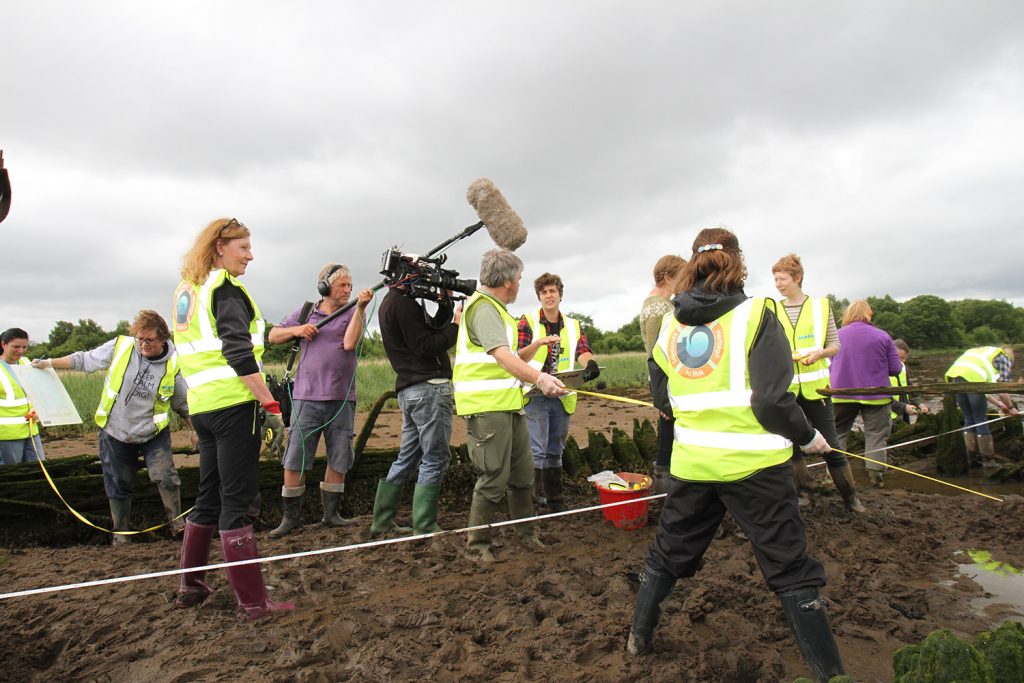 Volunteers being filmed recording one of the Clyde schooners

But how do programmes like this get made? The first episode features the Clyde – and here is a quick look at some of the bits you don’t see on TV.

Several months before filming started, the SCAPE team took members of Tern TV on a tour of potential sites. They were looking for places that looked good, but also had a story, something that they could flesh out in the programme.  We gave a pitch at each site, and the director and team of researchers then went away to develop a story outline. Following this, we helped them check facts and suggested people to interview as the programme developed.

After several weeks, the running order was ready, with each day’s work planned in detail. Filming a programme about intertidal archaeology involves careful planning around the tides, so the crew had a strict schedule to follow. The episode investigates several sites, which all needed to be filmed at low tide. On most days this meant visiting two locations, while scenes in archives and libraries could be arranged around the outdoor work. 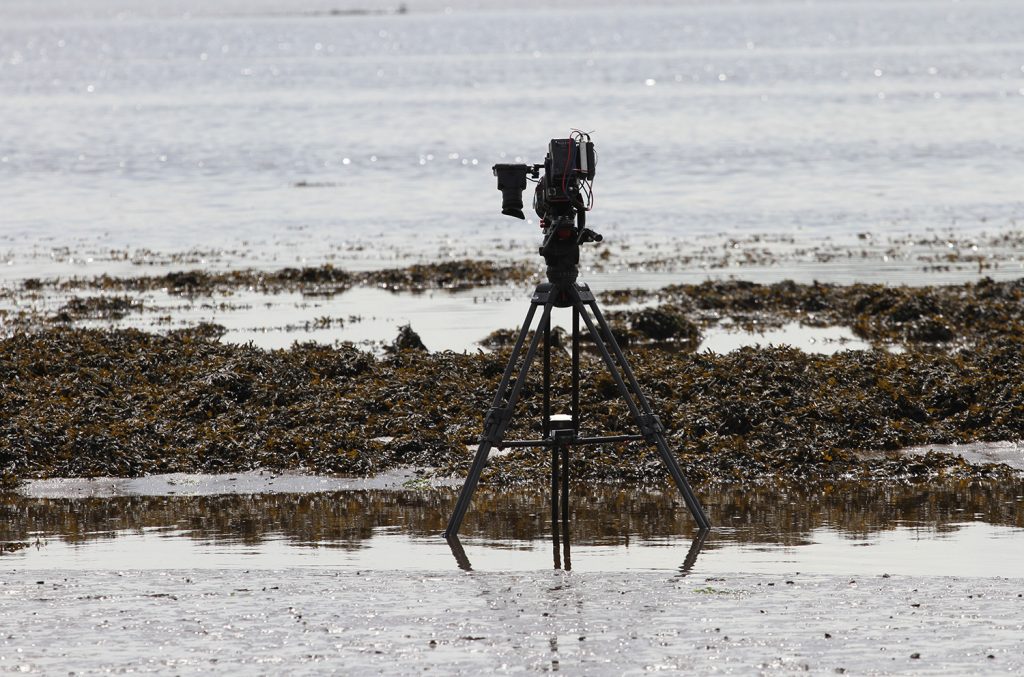 The core film crew consisted of two camera operators, a sound person, two drone operators, two people arranging logistics and the director. In addition, the presenter, Tori was joined by the SCAPE team, some of our friends from CITiZAN (visiting Scotland to provide continuity) and the people being interviewed each day. 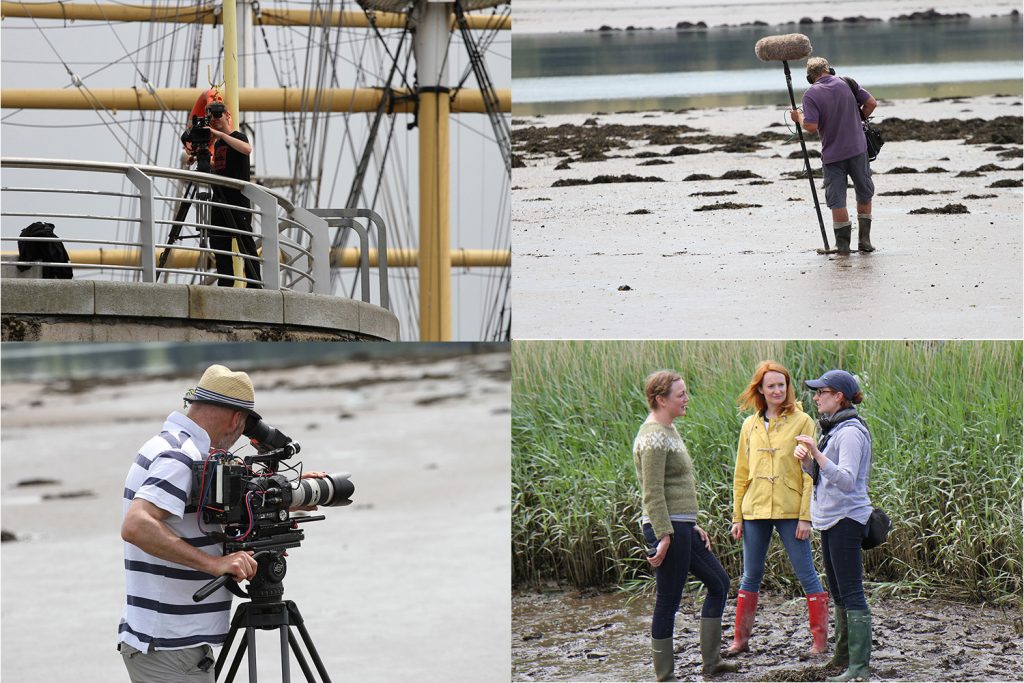 Usually when watching TV, it is the pictures that grab our attention – but capturing good quality sound is also crucial. To make sure that everything was recorded clearly, each person filmed was fitted with a hidden mic – and Pete also carried the large mic on a pole. He was constantly listening to all of the sound inputs at the same time, and it was his job to make sure that everything was recorded cleanly and that there were no additional noises. This led to frequent battery changes and pauses while we waited for aircraft to pass. 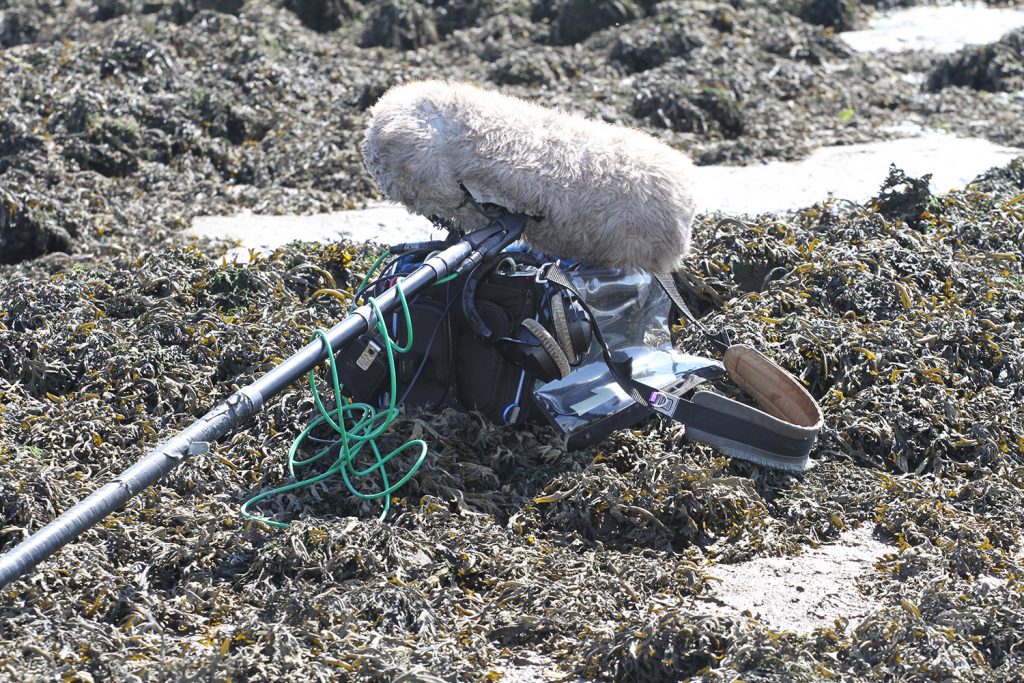 At the same time as filming, we were also surveying the sites, and some of the techniques presented a challenge for the crew. The director, Catherine, had to make sure that all scenes were filmed according to the schedule and that everything that needed to be said was recorded. Some shots would be filmed from a number of angles… 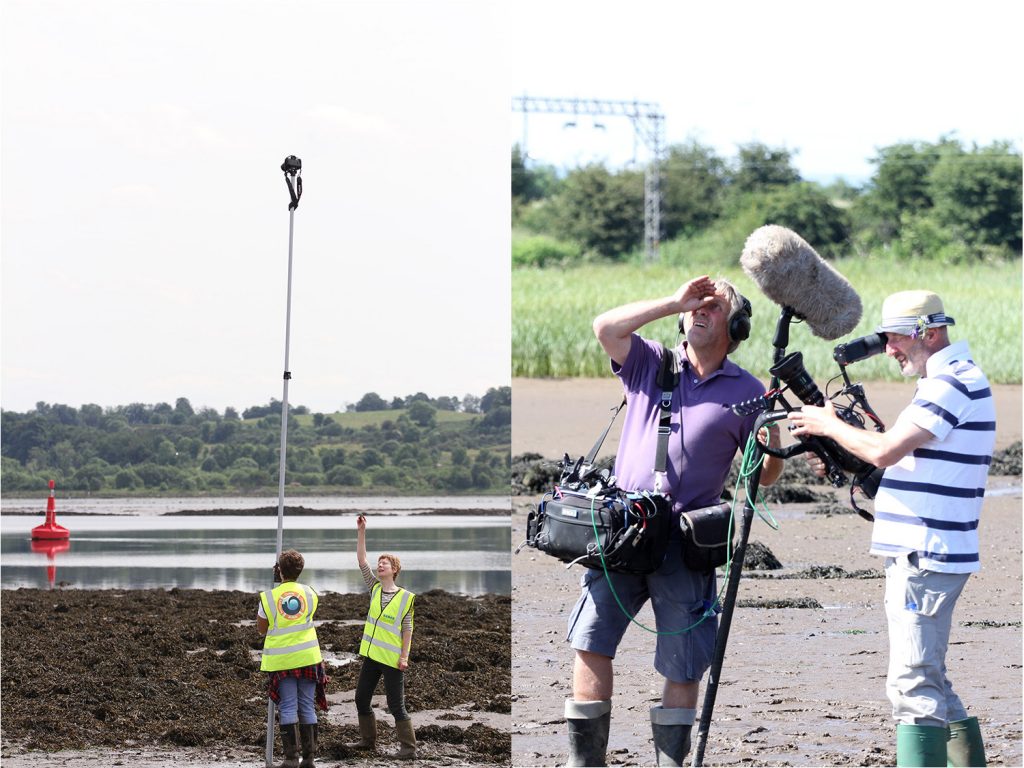 While Jo and Tanya take pictures using the polecam – Pete checks that Seamus has a good angle.

…and often, a scene would be filmed from different positions. Catherine had to ensure that with each take, everyone stood in the same place and said the same things. Below  – Tori, Jo, Alex and Gustav are being filmed looking at a map; firstly with two cameras taking close up shots… 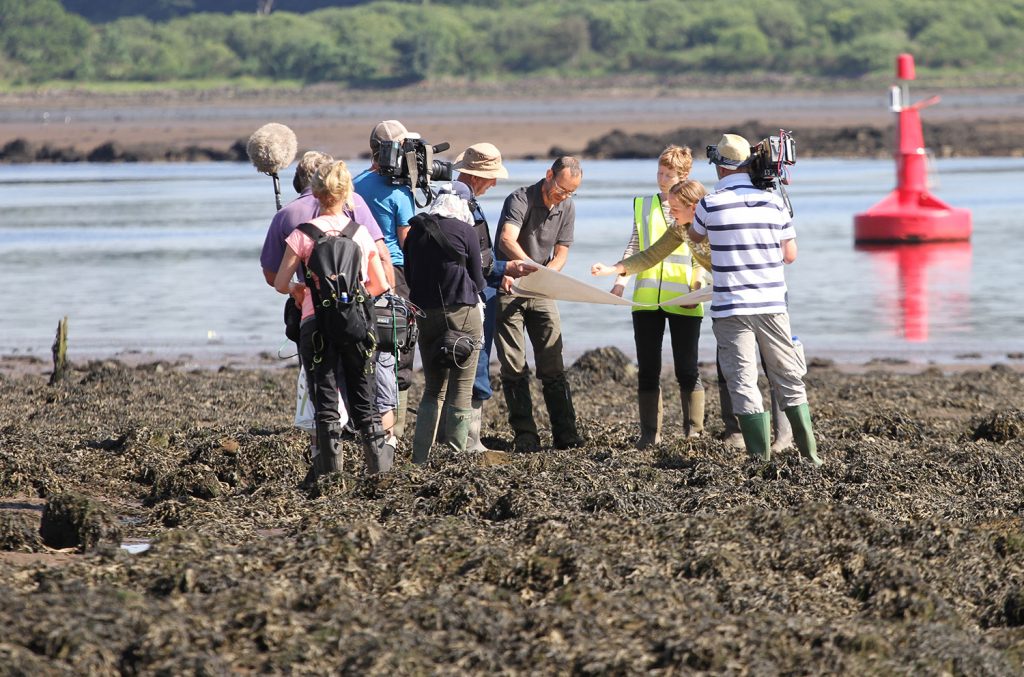 …then the same scene from a distance… 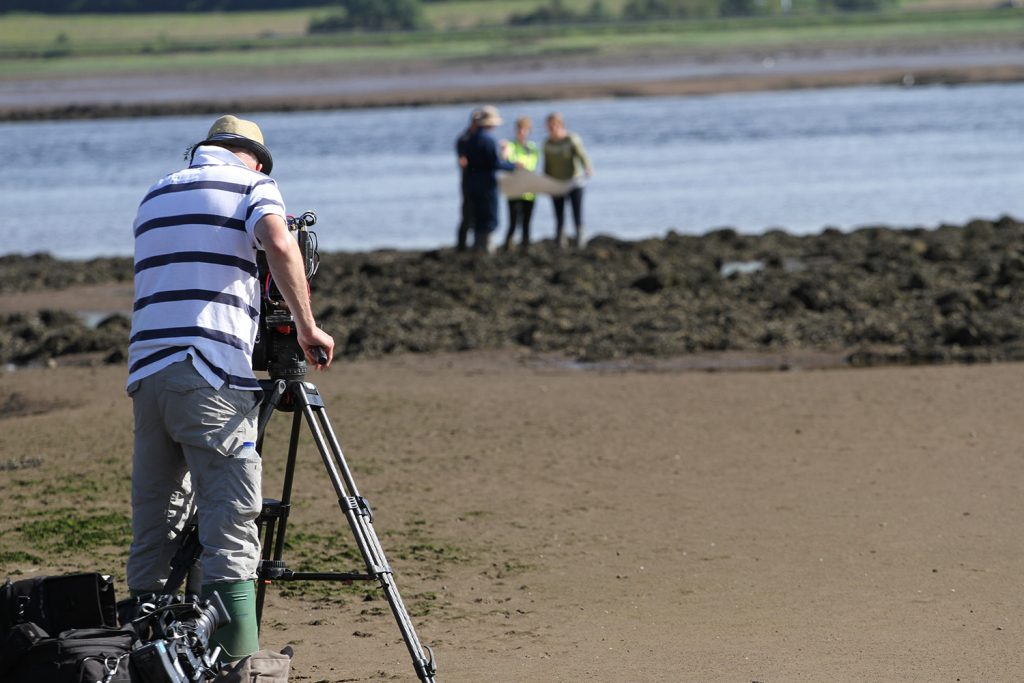 Seamus filming the same scene, but from a distance

…and finally, an aerial view filmed by the drone. 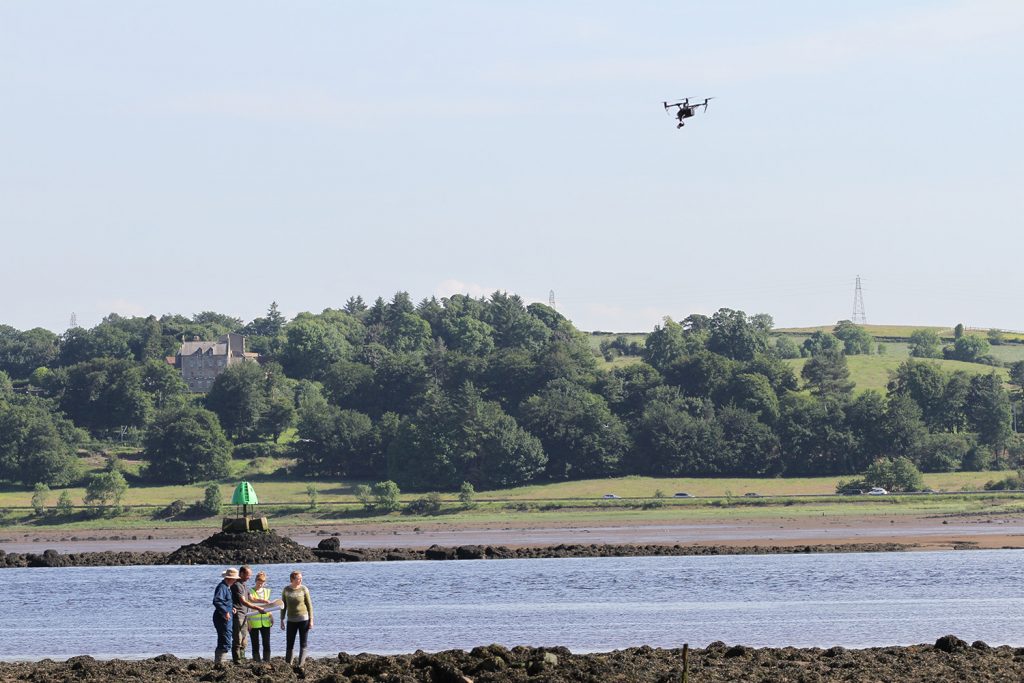 The same scene, filmed from the air by the drone

The drone was operated by Ka-Boom  (they have also filmed scenes for Game of Thrones). Phil and Tom worked together, one directing the flight, the other controlling the camera. This made for some spectacular aerial views. 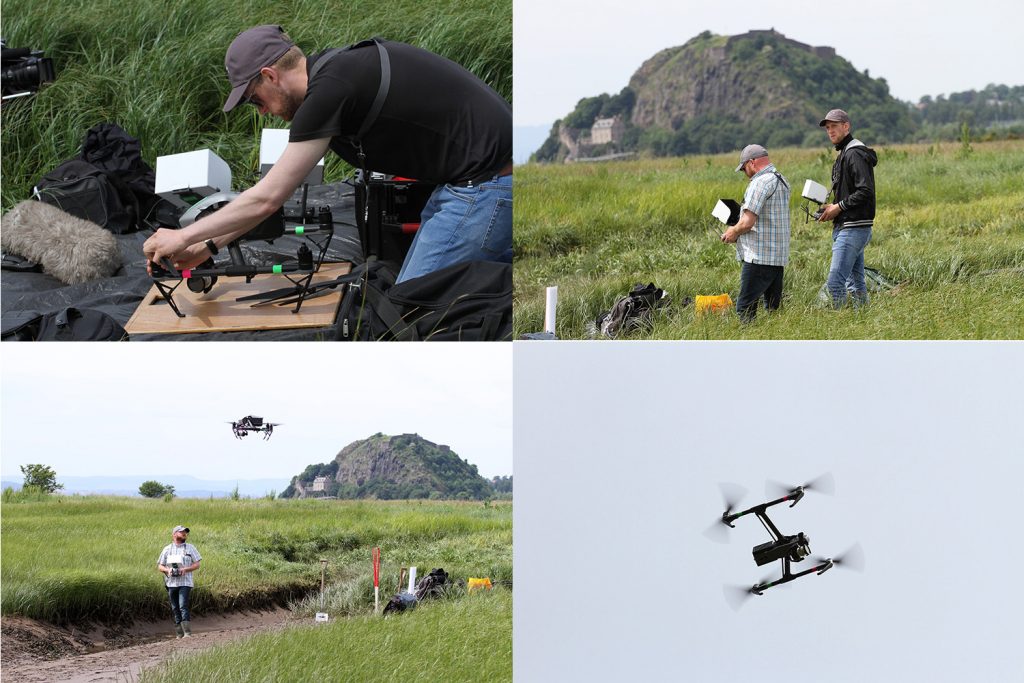 They had to get permission before each flight, and filming on the Clyde often meant all of us waiting a long time – while they got into position and arranged a safe time to take off! 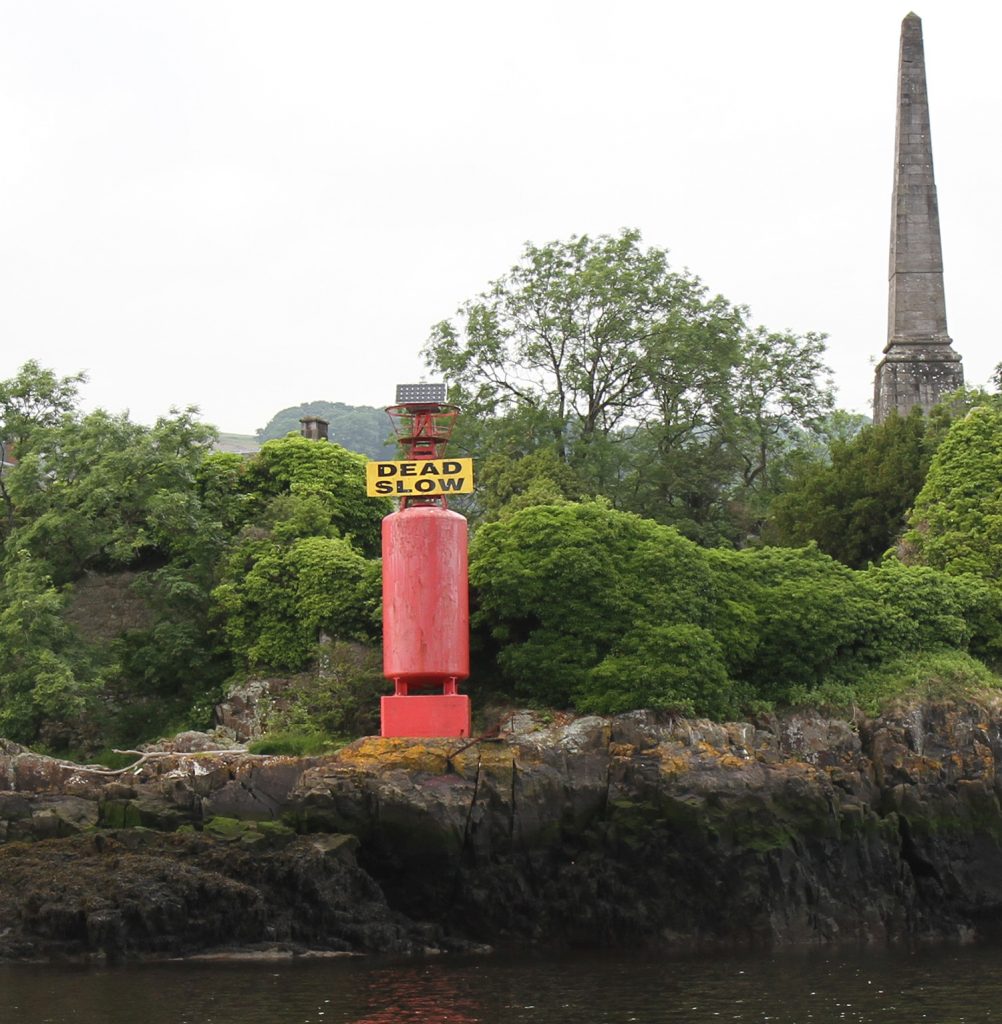 Waiting to get that perfect shot could sometimes take a while!

Many of the indoor scenes were filmed when the tide was high.  Being out of the wind and on a solid flat surface brought opportunities for Seamus and Rob to use an array of additional equipment with the cameras. 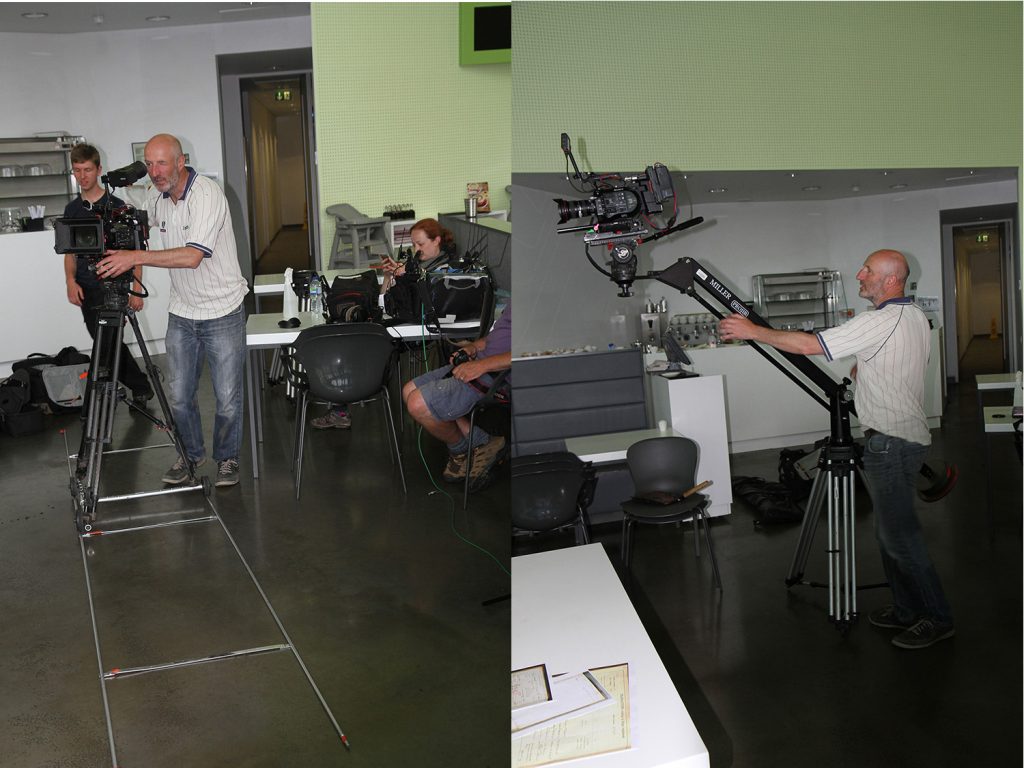 On one day of the shoot, we were joined by Brendan, the Executive Producer. Brendan has worked on Time Team and similar programmes and has a great interest in making programmes on archaeology. 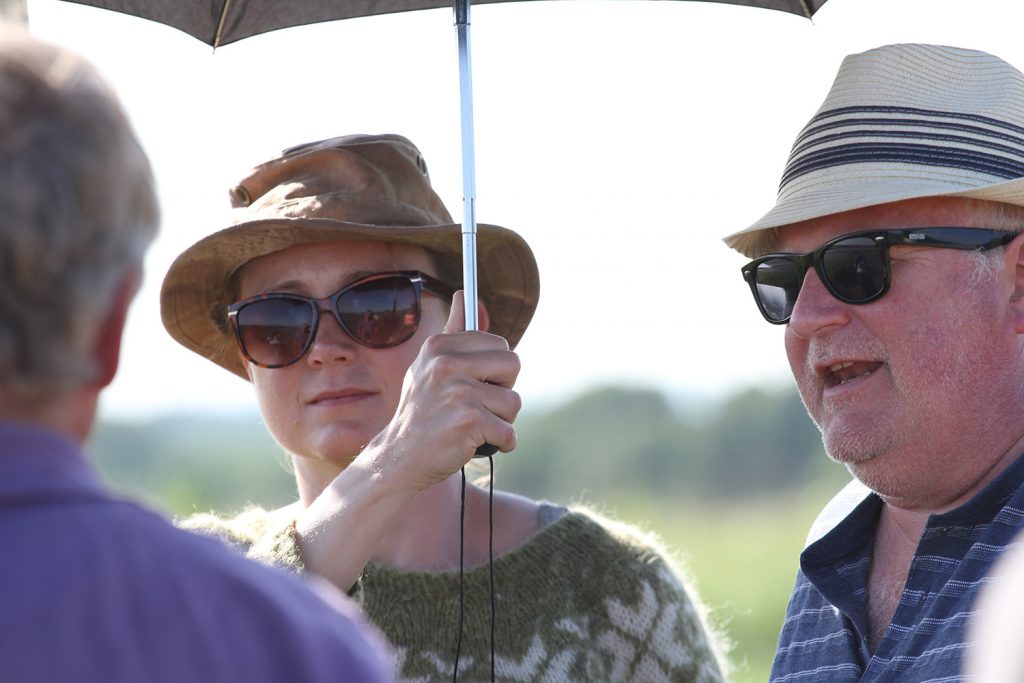 After the filming was finished, the editing team took over – and a whole new team got to work on selecting the best parts. With all the different camera angles, drone footage and locations, they’ll have had a job on their hands! The edit is now done, and the Clyde episode will be broadcast on Channel 4 Saturday, March 3rd at 8:00pm.