Alas! I am very sorry to say

That ninety lives have been taken away

Which will be remember’d for a very long time…”

The appalling verse of William Topaz McGonagall might wreak havoc on rhyme and massacre metre, but this example, probably his best-known poem, also commemorates one of Britain’s worst railway disasters. On a stormy night in late December 1879, a train crossing the bridge from Fife to Dundee failed to arrive on the north side. The high girders which formed the central span of the bridge had collapsed, falling the 88 feet into the water below, taking the train and its passengers with them into the River Tay. 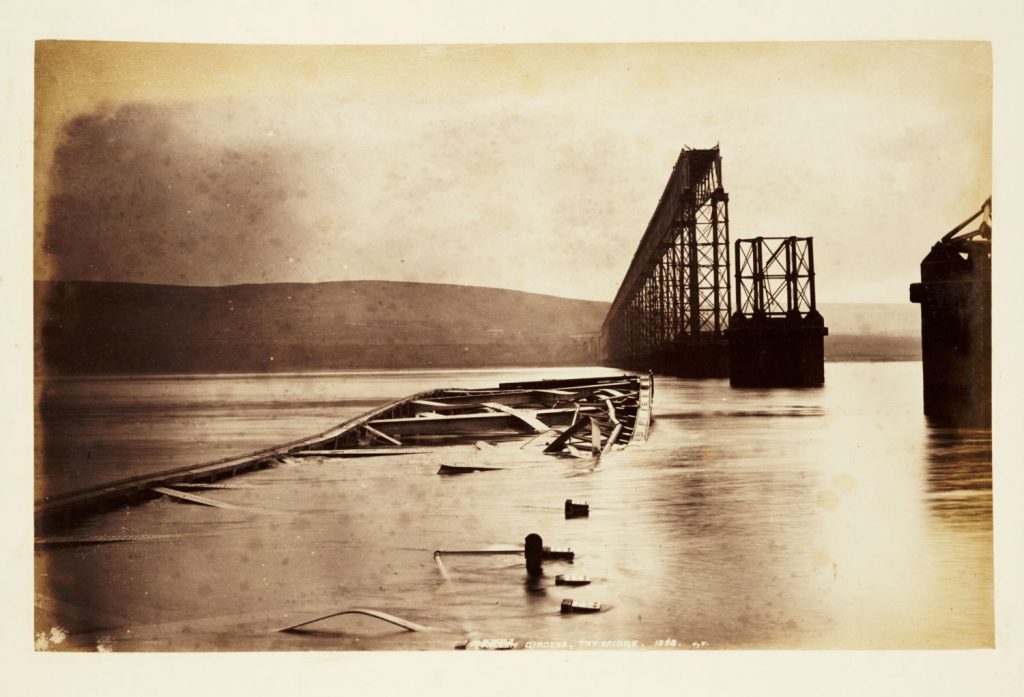 The collapsed girders of the central span of the bridge in the aftermath of the disaster.

The horror of the disaster sent shockwaves through society, and it was reported internationally. This engraving from the Illustrated London News shows the early diving efforts to locate the wreck of the train. 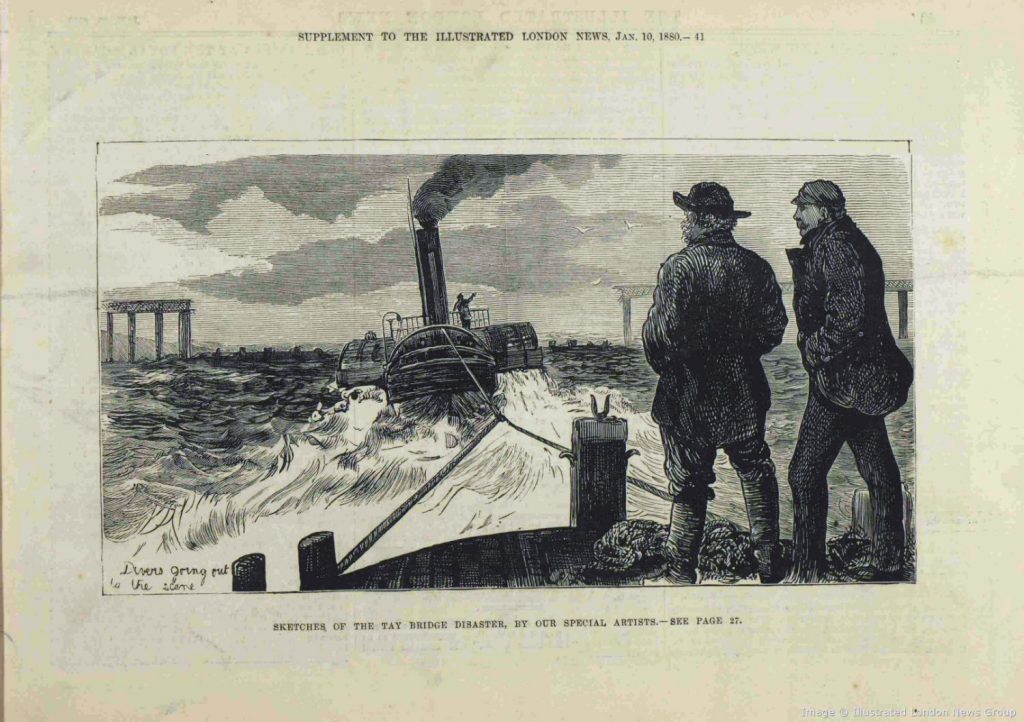 © Illustrated London News Group, available through The British Newspaper Archive. An engraving from the Illustrated London News capturing the drama of the diving operation. The artist was William Donnelly – who excavated Dumbuck crannog, shown in the Clyde episode of Britain at Low Tide, and who may have been responsible for the faked objects supposedly recovered during his excavations, which you can read about in the Historic Environment Scotland blog.

A public enquiry was immediately launched to establish the cause of the disaster. The bridge had been completed less than two years earlier, so what had gone wrong?

The investigation gathered all the available information, and involved the salvage of the wreckage of the bridge and train. 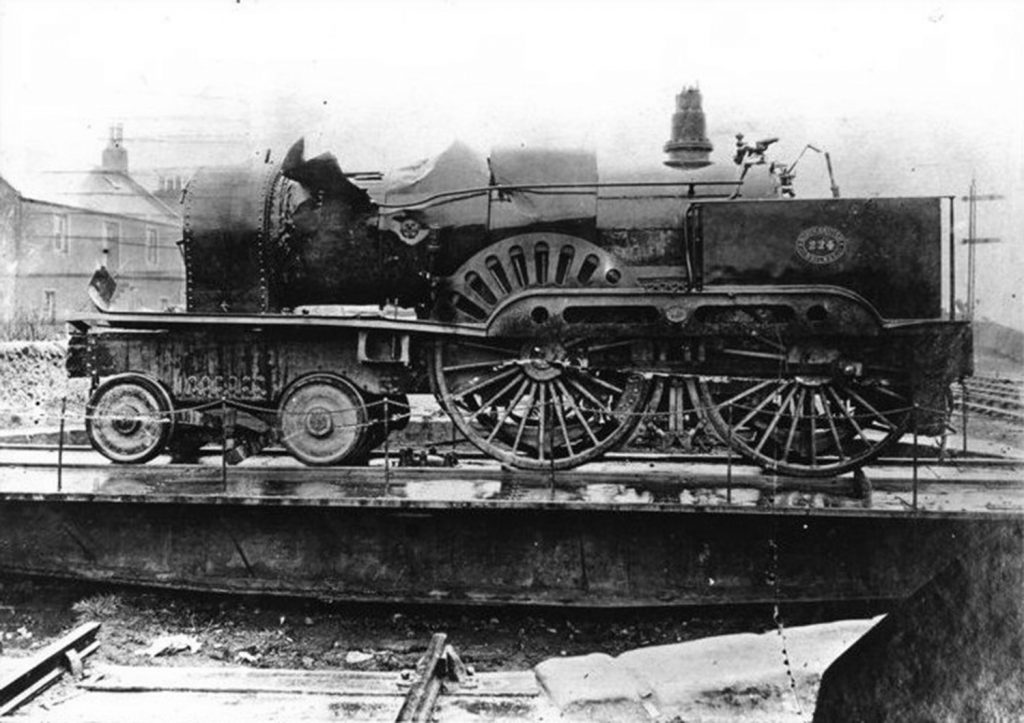 Although the engine – no.224 – was eventually recovered, it repeatedly slipped back into the water when being lifted. Despite this, the damage was fairly minor, and after repairs, it went back into service. Throughout its long subsequent career on the railways, it remained known as The Diver. 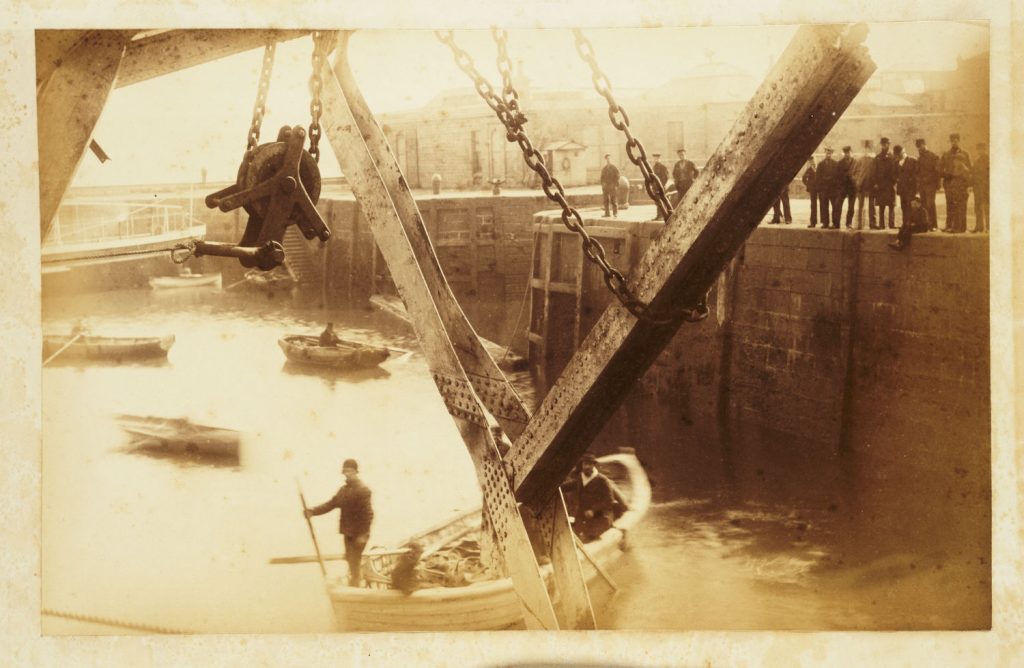 Some of the collapsed girders recovered from the river being brought into harbour during the salvage work.

Study of the recovered girders, plans and photos of the bridge, and eyewitness accounts of the accident led to the conclusion that serious flaws in the engineering were to blame. The design had failed to account for the impact of high winds on the structure. Thomas Bouch, the engineer who’d received a knighthood for building the bridge, was held responsible. Disgraced, he died within a year.

The salvage effort had played a key role in the investigation, recovering the twisted remains of the girders from the river. 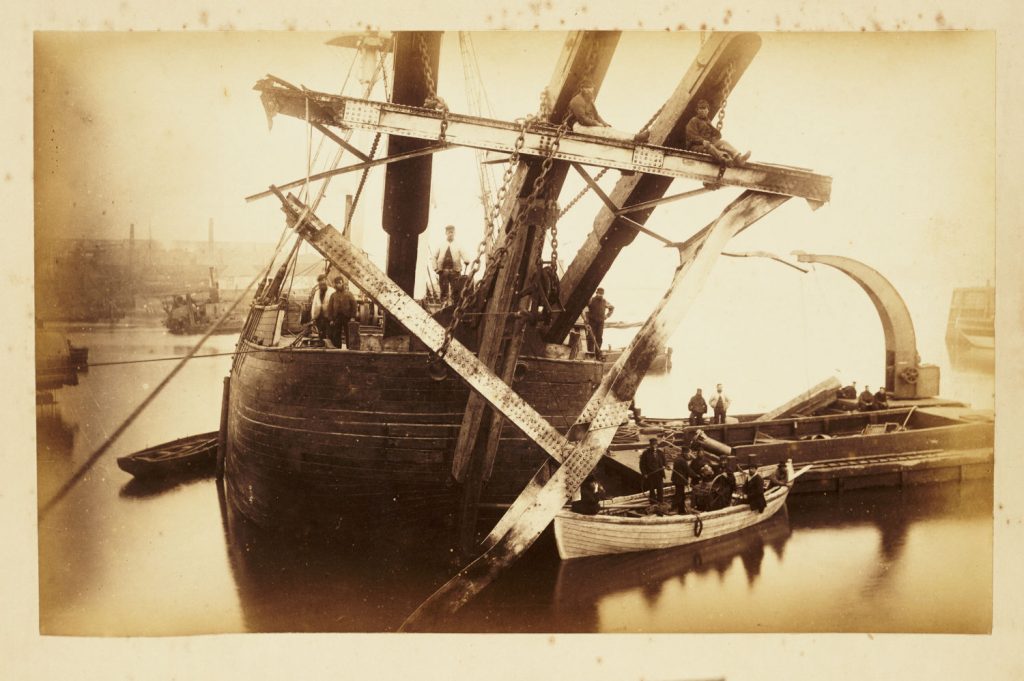 A salvage ship at work, with part of the wreckage of the bridge suspended by thick chains. Despite this forming part of an investigation into a tragic disaster, Victorian attitudes to health and safety haven’t been affected – workmen are sitting casually on the metal beam.

However, not all of the structure of the original bridge was written off, some parts were reused and incorporated into the replacement which was built a few years later. The boats which had been involved in the salvage operation were involved in the new bridge’s construction. 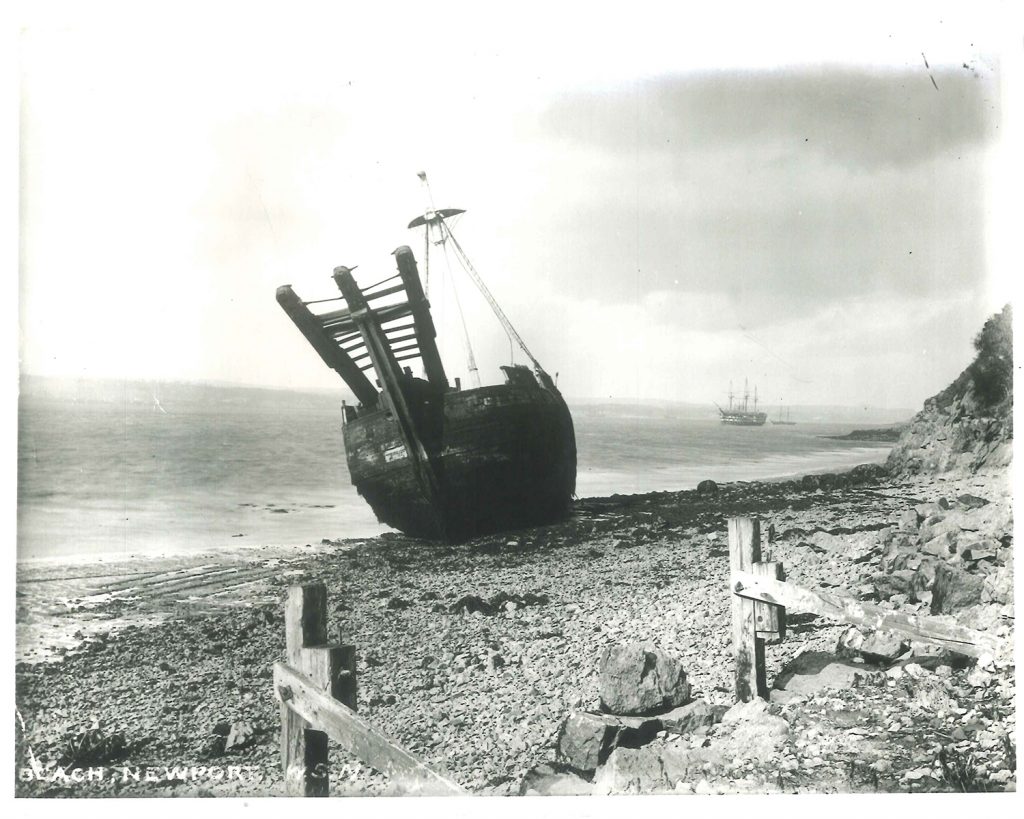 Once this had been completed, the wooden boat, with the specially-fitted prongs on the bow – salvage horns – was laid up on the shore nearby. © D C Thomson and Company.

Today, standing on south shore of the Tay, beneath the high girders of the new bridge, the brick piers of the original crossing are visible at low tide – a sobering reminder that the tracks above are not the first to have crossed the river. However, they’re not the only evidence of the disaster on the riverbank here.

A few meters away, a row of timbers hang with seaweed. They’re the remains of a heavily-built wooden boat, with just the keel, ribs and some of the planking standing above the sticky mud, sitting on the spot where the salvage ship was abandoned. 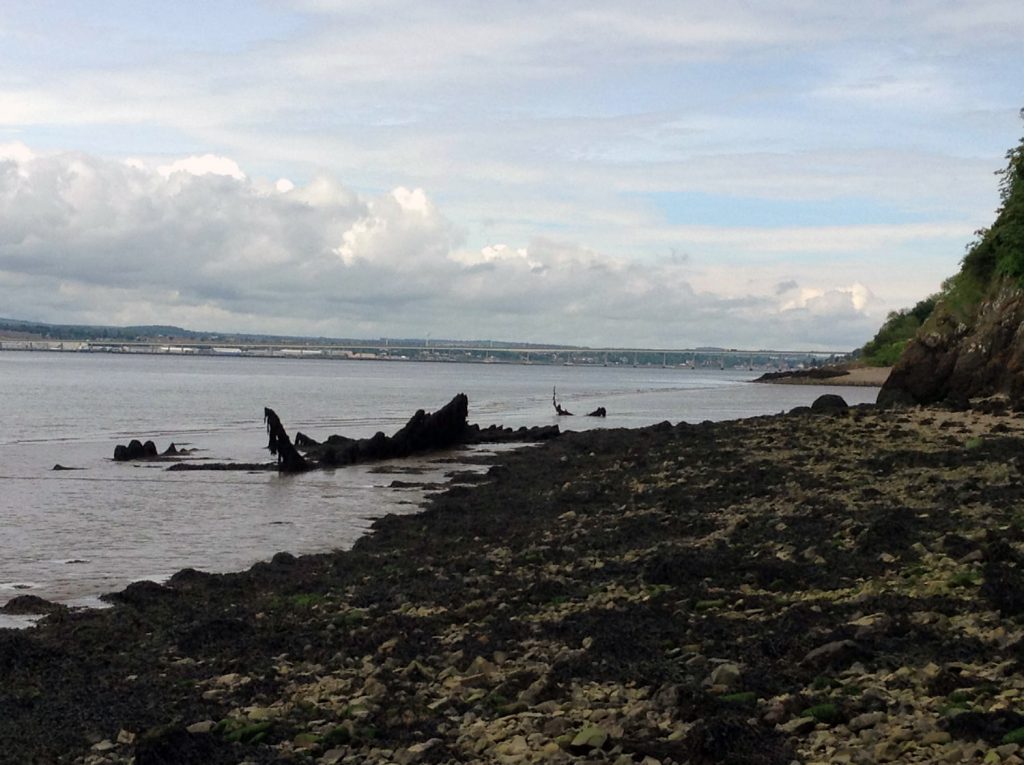 All that’s now left of the salvage boat that recovered the wreckage of the Tay Bridge disaster.

Thanks to the public interest in the story of the disaster, there’s a great collection of photographs of the investigation which have allowed us to identify the remains on the shore and prove their relationship to the bridge disaster. The detailed news coverage at the time has even allowed us to give the salvage boat back its name. A report from the Dundee Courier in April 1880 describes how the Henry lifted wreckage from the riverbed using “large upright beams placed on the bow…” 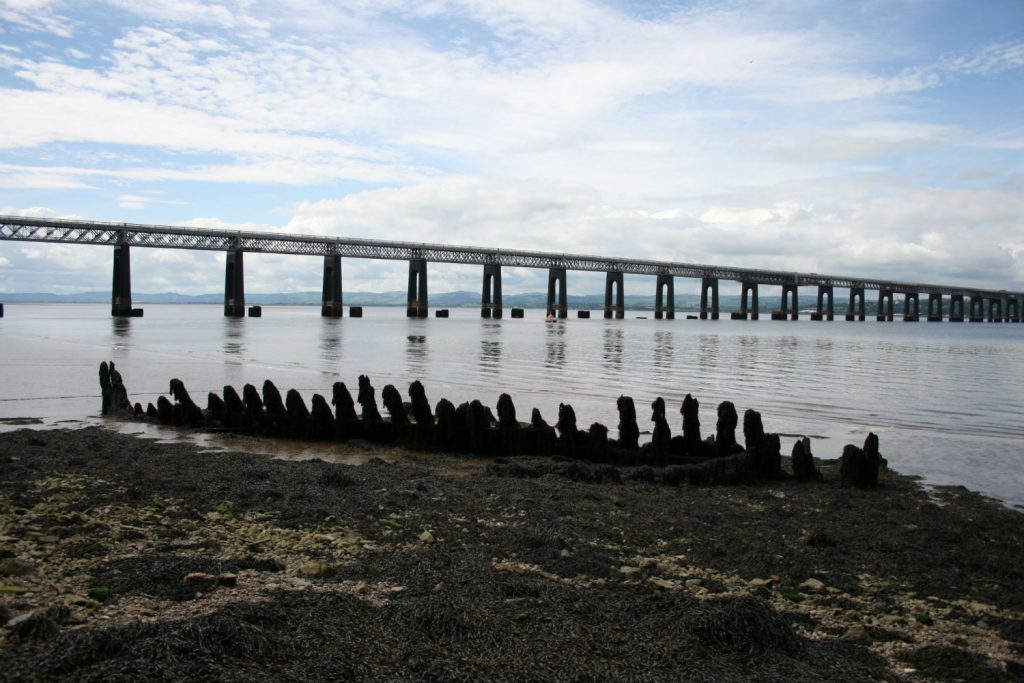 The low remains of the brick piers of Bouch’s original bridge march in pairs across the river, parallel with the later replacement. The ribs of the Henry stand in the mud nearby.

Almost 150 years of tides have covered the remains twice a day, and little now remains of the Henry. Memorials to the victims of the disaster stand at either end of the new bridge, listing the names of those who died; though the exact figure remains unknown.

William McGonagall’s poetry might be some of the worst in the English language; so bad that audiences bombarded him with rotten fish, and authorities banned performances – but thanks to this very notoriety, his verses are still quoted today as a further commemoration of the Tay Bridge disaster.