Adventures in Lewis and the Uists

Summer fades quickly in northern Scotland, and we were so pleased to fit in a week in the Western Isles before the nights draw in and the wind starts to bite.

In Lewis, we spent time with old friends from Lewes Castle College, re-visiting sites that we’re keeping a close eye on and getting to know new ones. Here at the edge of the Laxdale Estuary just outside Stornoway, the remains of a Norse and medieval settlement is steadily eroding from the sandy coast edge. 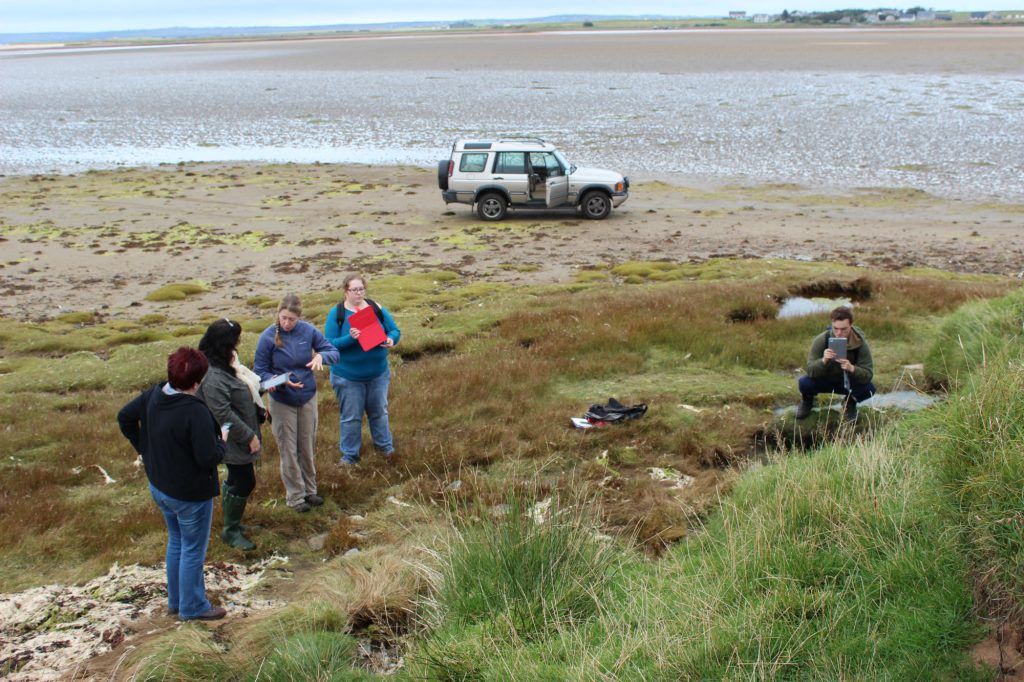 Getting to grips with a Norse settlement on the edge of the Laxdale Estuary just outside Stornoway.

Our trusty gold SCAPE Land Rover got us all the way across the estuary and back again – but made an undignified exit to dry land by getting well and truly stuck. We were rescued by the owners of this beautiful place who pulled us from the mud – thank you! 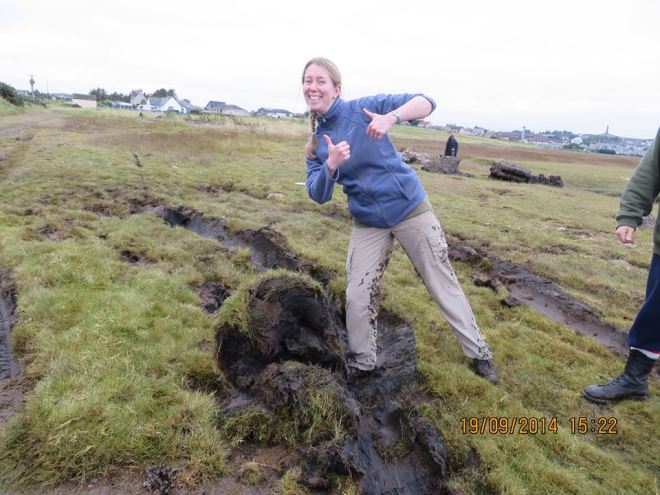 Evidence of our undignified exit from Laxdale Estuary…

Next day, we re-visited a possible burnt mound at Suainebost. There are only a handful of known burnt mound sites in the Western Isles, and this one is all the more interesting because it is next to a medieval metal working site. Both are located in the soft sands of the machair and are extremely vulnerable as a result of wind and stock erosion. These will go to the top of the priority list of sites that need urgent attention. 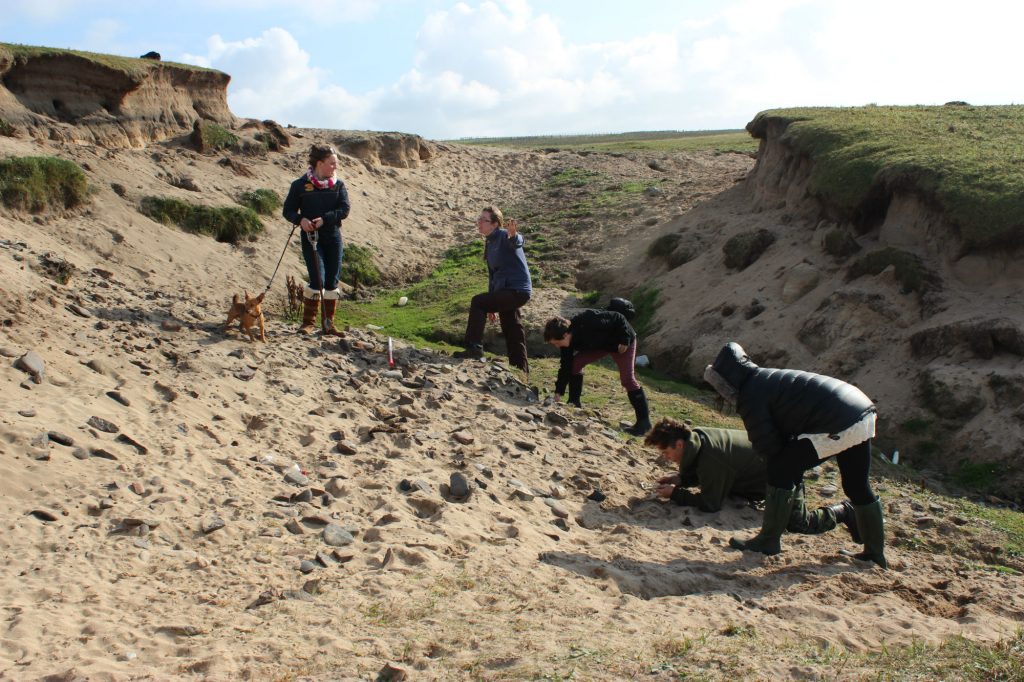 Field crawling (?) over the burnt mound at Suainebost.

We had time for a flying stop to the settlement mound at Gabhsann. Over the past few years we have observed various sections of this huge multi-period site eroding and becoming stable again in a cycle of change typical of soft coastlines on exposed beaches. 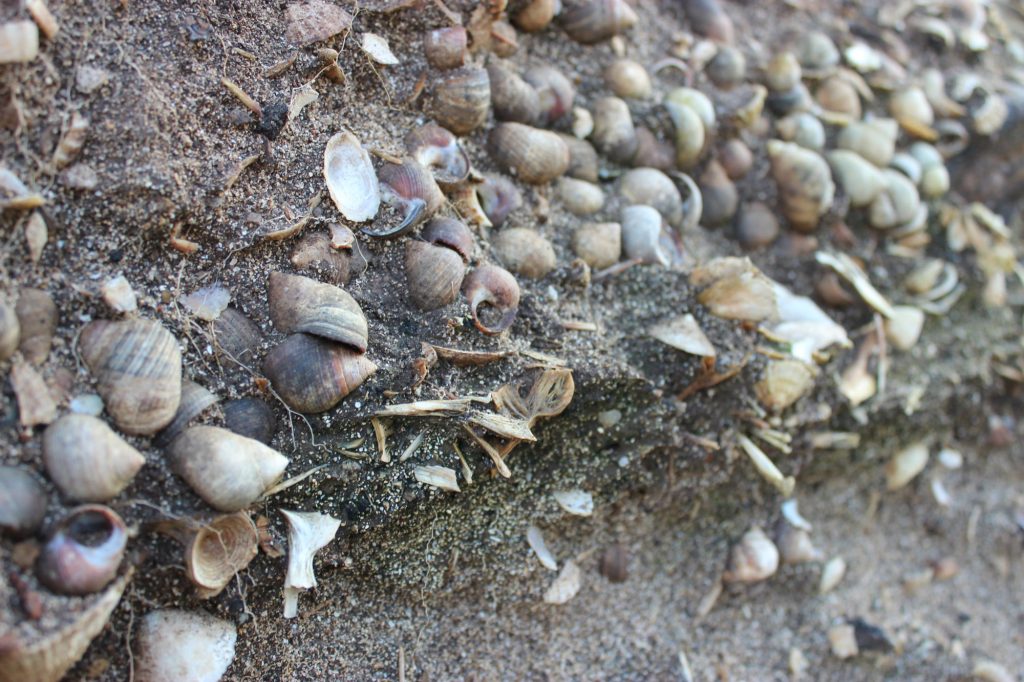 Winkles and fish bone in a classic shell midden. This one at Gabhsann (Galson), Lewis probably dates to the Norse period.

Our friends at the UHI student archaeology society are organising visits to update all of the remaining high priority SCHARP sites in Lewis over the next few months. If you’re interested in joining in, get in touch with them. They’re a great group of people and you’ll have a lot of fun while you visit superb archaeology across Lewis.

Heading south to the Uists we ran into an equinoctial storm on Monday whilst out and about with members of Access Archaeology Group. This didn’t seem to deter anyone and we updated 3 high priority sites on the Aird An Runair peninsular on the Balranald RSPB nature reserve. Of these, a prehistoric and Norse settlement at An Caisteil has deteriorated since it was monitored in 2006 as a result of wind and stock erosion. It was raining so hard we have no pictures! You will have to visit yourself to explore this incredible landscape of archaeology.

What must have been an enormous Iron Age village at Baile Sear is still being revealed in the eroding dunes. Here a wheel house has been half sectioned by the sea. A few metres away, layers of peat ash and food remains from another building are just starting to emerge from the sand. 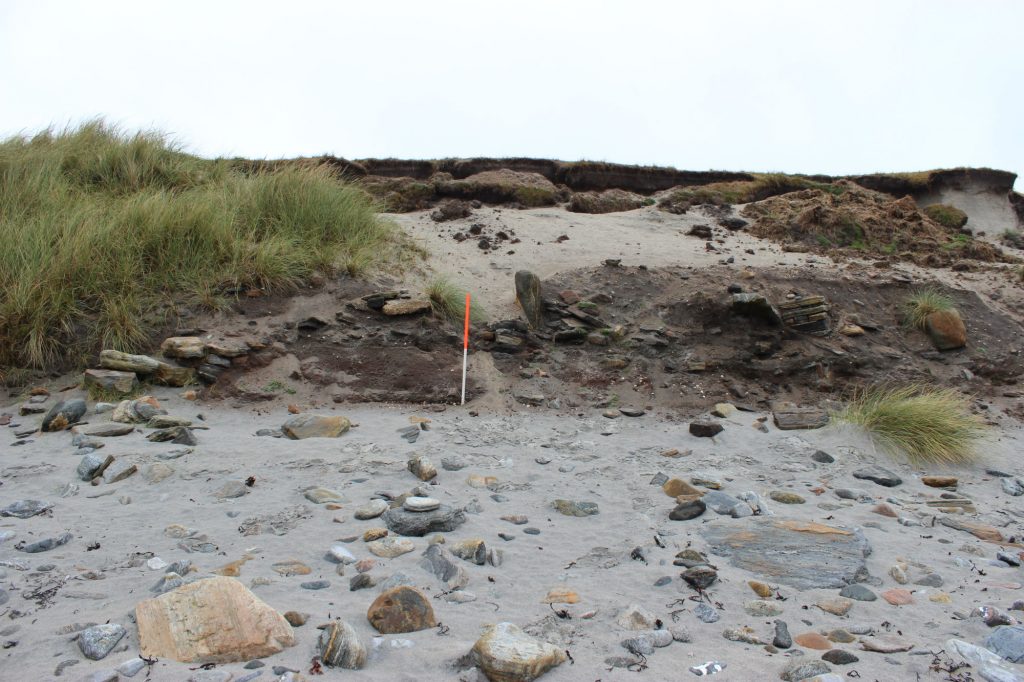 An Iron Age wheel house eroding at Baile Sear, North Uist. You are looking at the circular outside wall on the left with the stone piers and midden deposits inside.

In South Uist, in great company with some new faces, our day had a memorable beginning with the sight of a majestic golden eagle at close quarters. The day continued to offer unforgettable experiences. At a remote parking spot down a mile long track where we searched for the remains of a cist cemetery, Annie’s 2-seater Mazda, sports car (an unlikely survey vehicle, but her other car was in the garage) was joined by 2 more identical Mazdas! They hailed from east Aberdeenshire and were as surprised as we were to meet at this place. 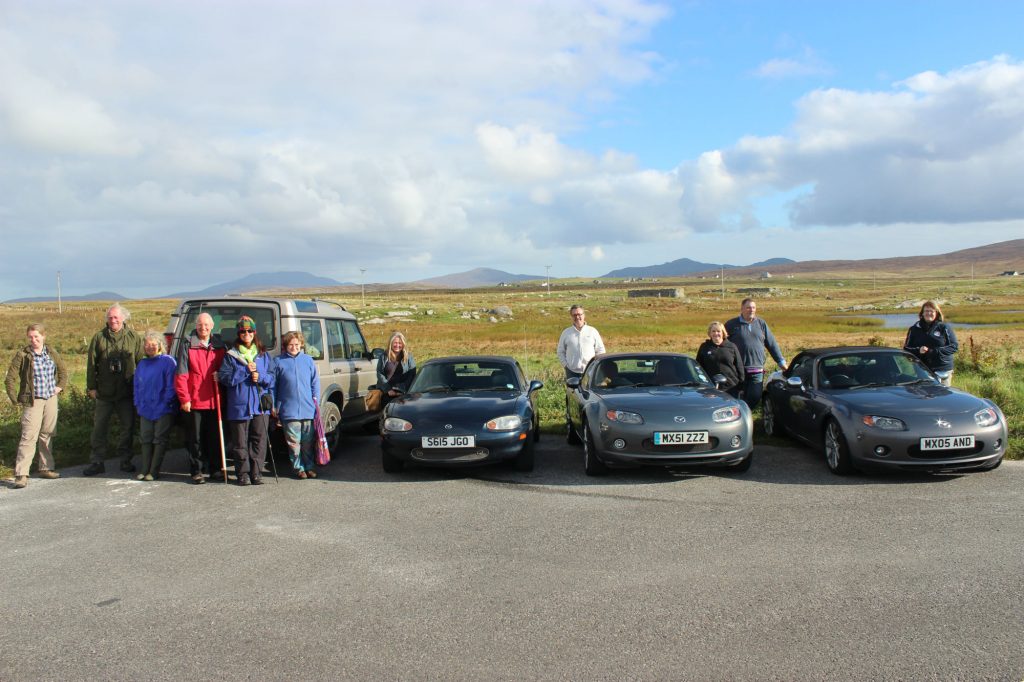 What are the chances of meeting an outing of Mazda sports cars down a farm track in South Uist? Annie’s is next to the land rover.

Later on, we ate our sandwiches in the hollow of a wheel house, excavated some time before the 1950’s. It is said that the stone was used to build a wall around the Hallan cemetery nearby. The name of this place, Sithean a Phiobaire means the piper’s fairy hill. We imagined the thousands of meals eaten here by those who came before us. 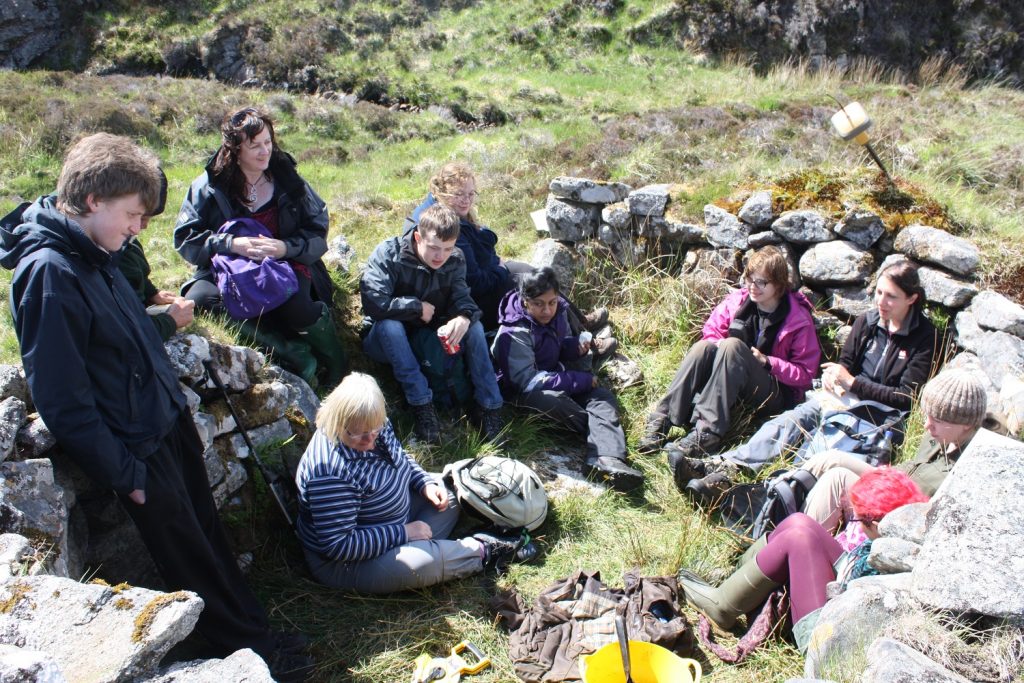 Access Archaeology Group is coordinating field trips to monitor and record the condition of SCHARP priority sites in the Uists and Benbecula. If you want to be involved, make new friends and learn about the incredible archaeology here from those who know it well – get in touch with them, you’ll have some laughs while you’re doing it, that’s a certainty.