Brochs are amongst the most spectacular of eroding coastal archaeology, and in the course of SCHARP, we have seen and recorded quite a few of them. Many thousands of these towers of the Iron Age would once have been an impressive sight along the coasts of  Northern Scotland, Orkney, Shetland and the Western Isles. 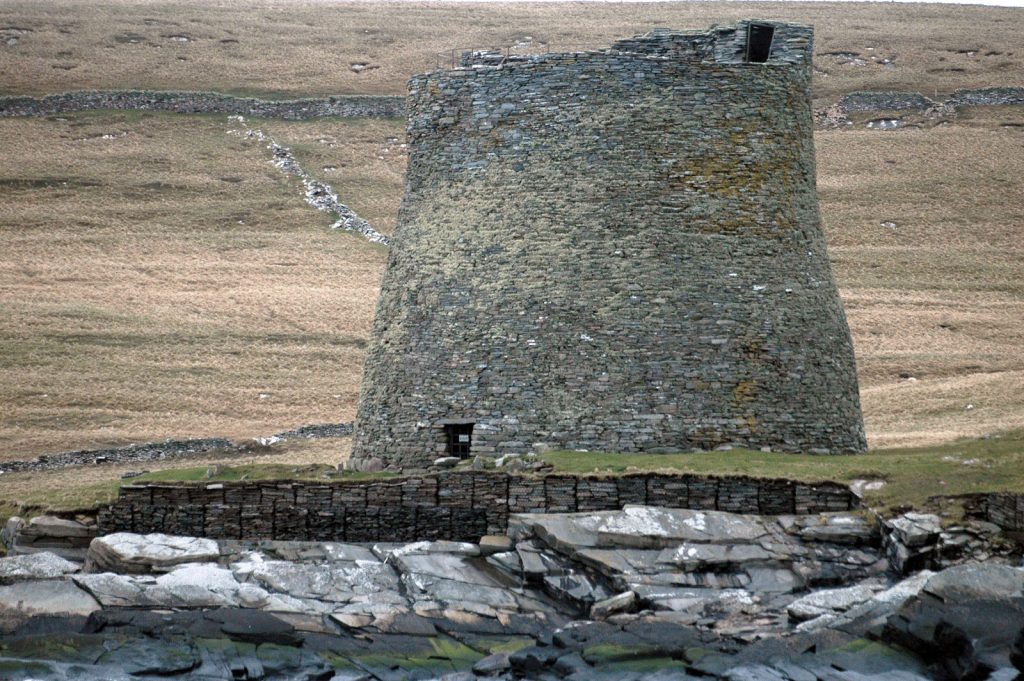 The broch of Mousa viewed from the sea. Photo Richard Pattison

They were generally built around 200BC (although some are earlier) in coastal locations (although not always), and were occupied for a very long time – in some cases for up to 1000 years. 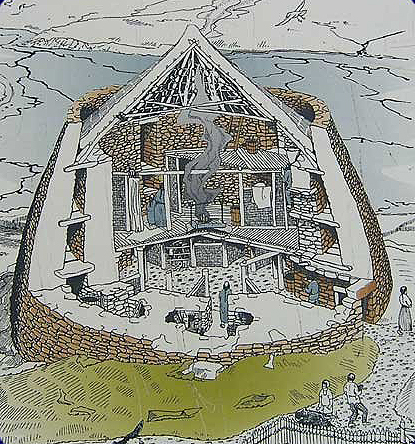 Cutaway showing what a broch may have looked like, based on a drawing by Alan Braby.

The defining feature of a broch is a massive encircling double wall. This photo looking down into the broch of Mousa in Shetland, taken by Kieran Baxter, shows the classic double walled broch construction. 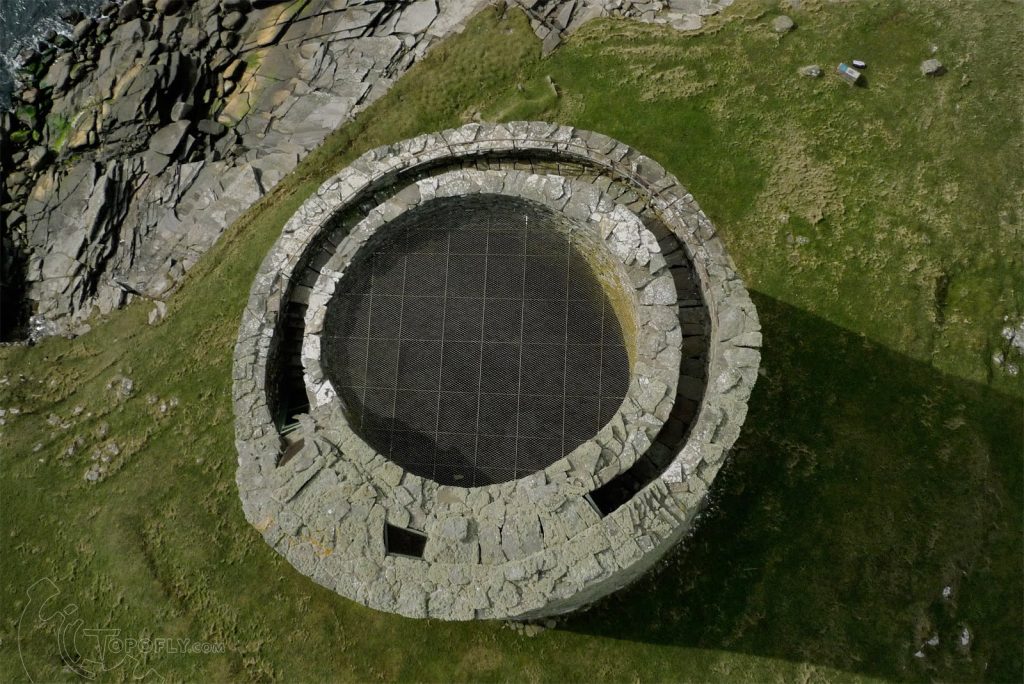 Looking down into the broch of Mousa showing the double wall, which is the defining feature of a broch. This image created using kite photography by Kieran Baxter. Go to www.topofly.com for more of Kieran’s brilliant work.

People re-modelled brochs over these long timescales. It looks like some of them were transformed into sort of super wheelhouses during their lifetime. Here are two great examples from Shetland at Scatness and Levenwick. 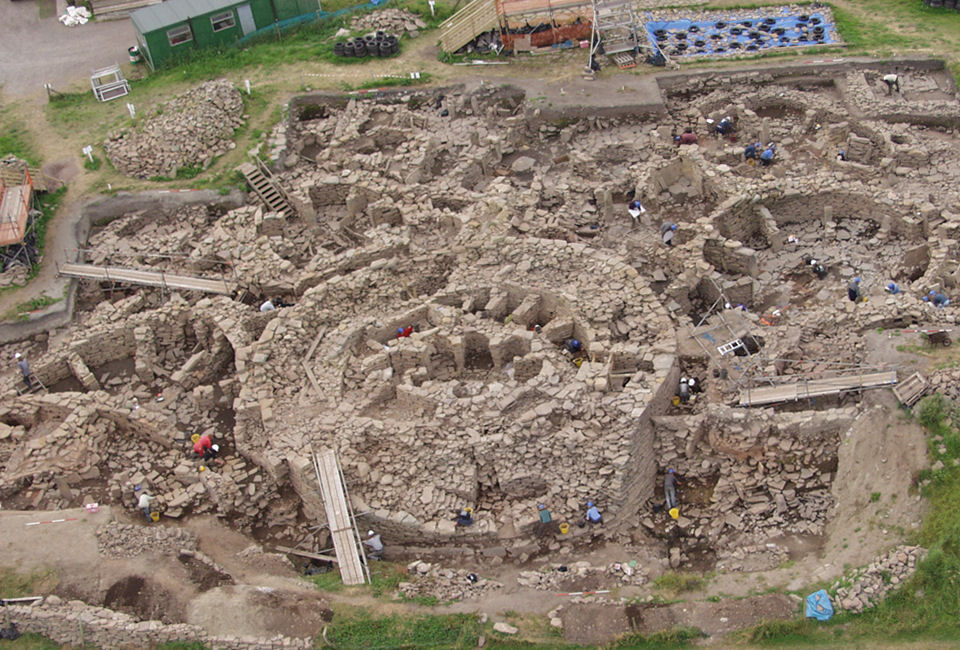 A broch with a wheelhouse inserted into it . Same as Levenwick, and possibly the same as Channerwick. Photo taken during excavations by Bradford University at Scatness, Shetland. 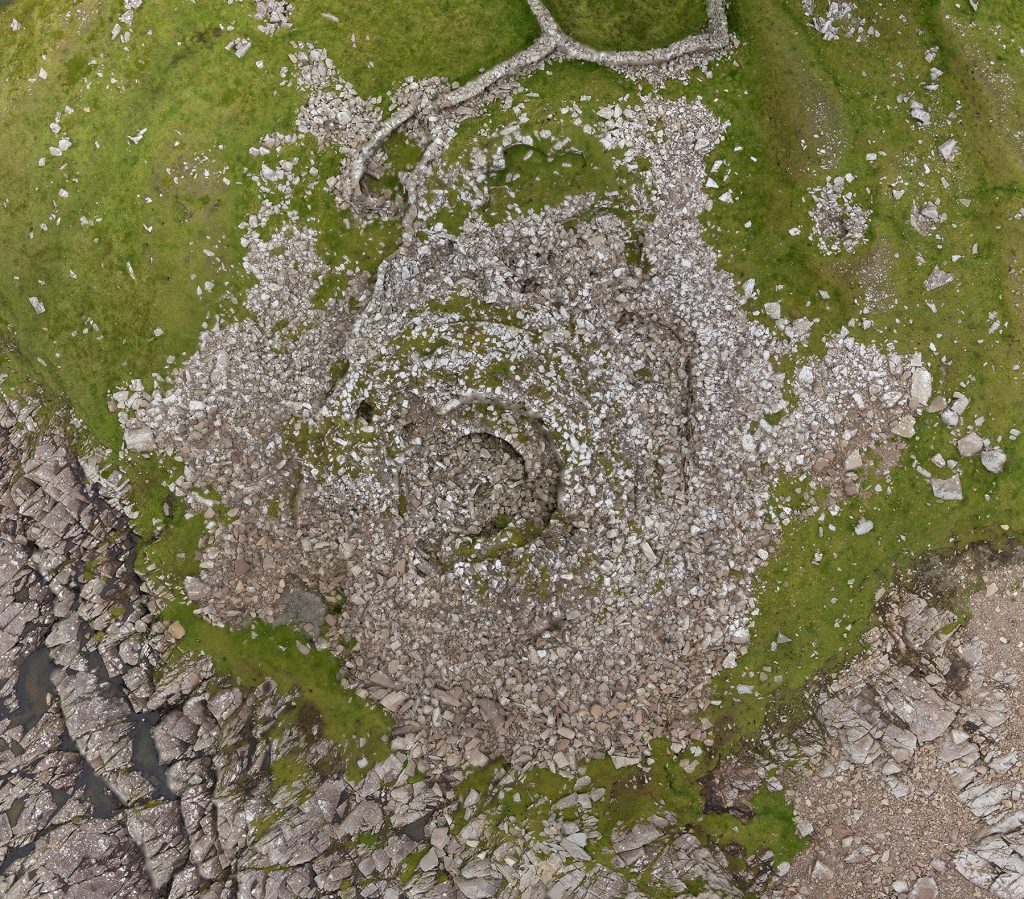 Look closely at this jumble of stone and the concentric circles of a broch outer wall and inserted wheel house will reveal themselves. This is Levenwick Broch in Shetland. Photo by Eddie Martin.

We think that the site, revealed in 2012 at Channerwick in Shetland  has the form and dimensions of a broch with wheelhouse features inside the walls. Archaeologists have excavated a great many brochs and they have been studied intensively since the 18th century. 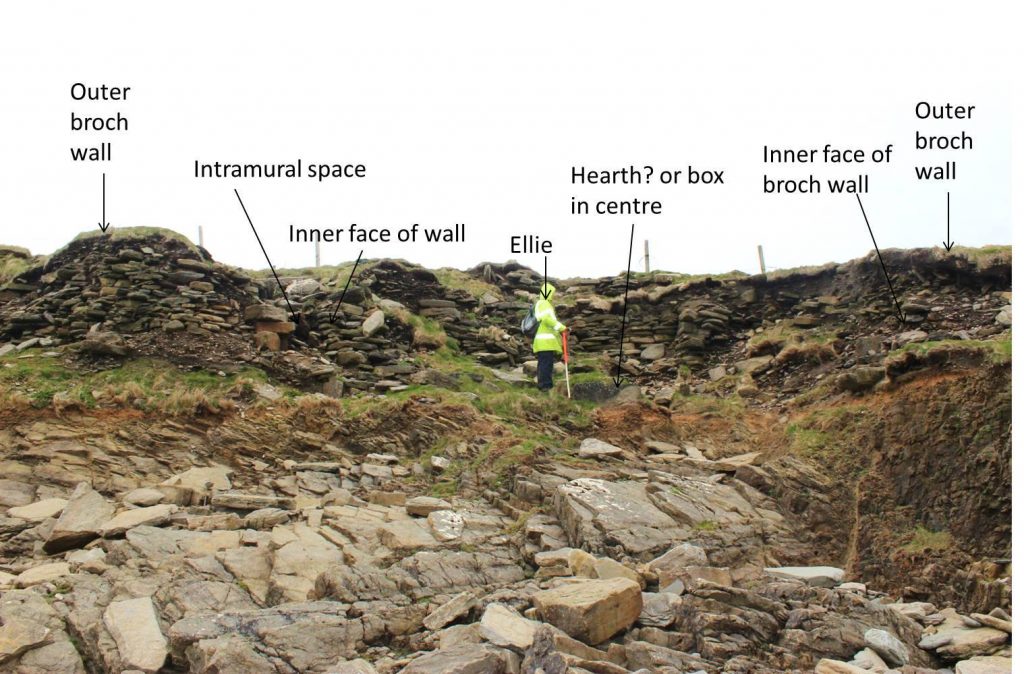 The massive walls of Munkerhoose broch on Papa Westray. Once the seaward side of the wall has collapsed the sea will quickly wash away internal structures, leaving behind this very typical hollowed out broch shell.

It is interesting to see ideas about their purpose and who lived in them change according to accumulating evidence and the shifting world views of our own society. Despite centuries of intensive research, two of our brochs – Channerwick in Shetland, and Lopness on Sanday are NEW discoveries. 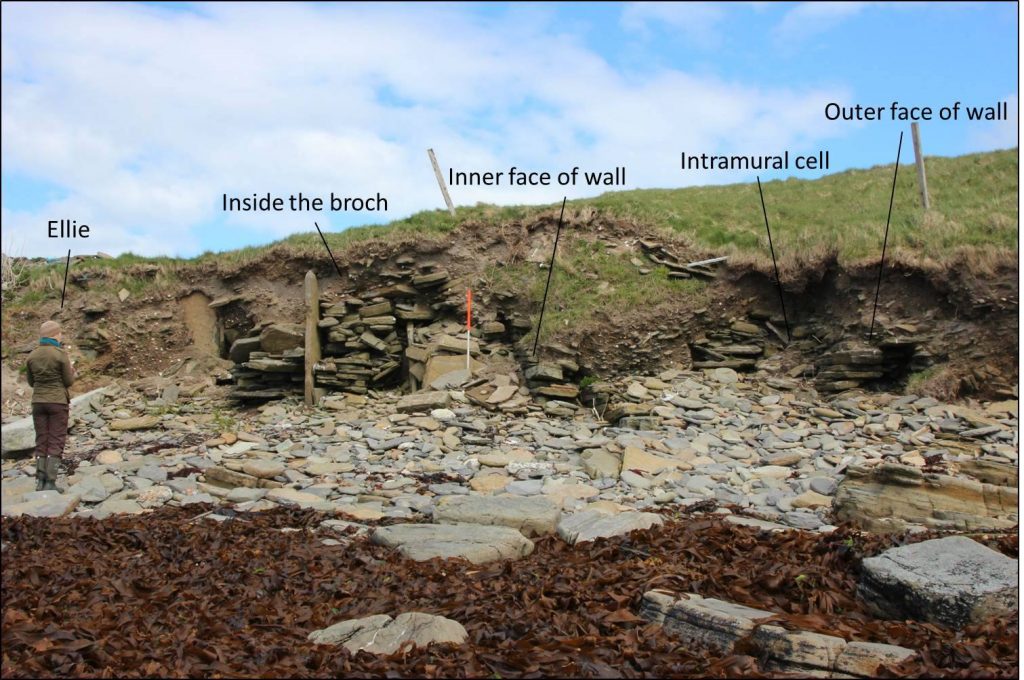 A perfect little half-sectioned broch tucked into a corner of Lopness Bay on Sanday. If we were to clear some of the beach stone we could probably find more of the plan – and maybe even an underground chamber as at Channerwick.

This is where coastal erosion has such a dramatic part to play in the revealing of new information about our past. In fact, in both of these cases, the brochs must have been eroded more than once. The current erosion has stripped away vegetation and slumping to re-expose the remains, which may have been last seen too long ago to make it into  historic records. Erosion also reveals new information about apparently well-known sites. In this scheduled ancient monument of Sna Broch on Fetlar in Shetland, the broch tower structure is long gone. 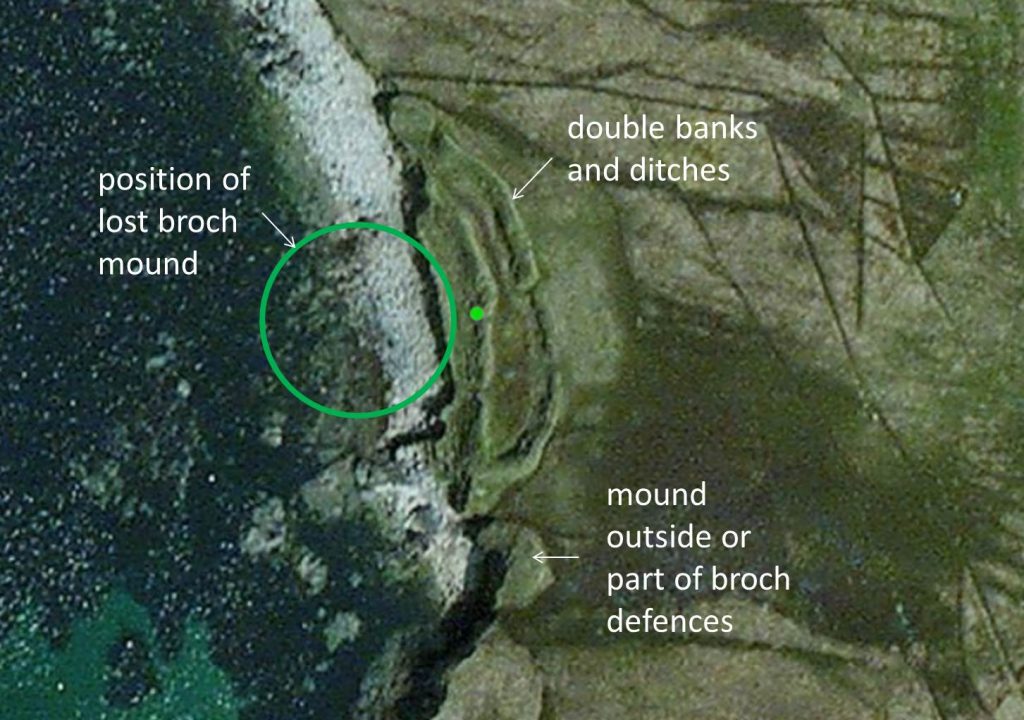 Aerial view of Sna Broch on Fetlar, Shetland. Compare this with the aerial view of the broch of Gurness below to see what may have been lost. 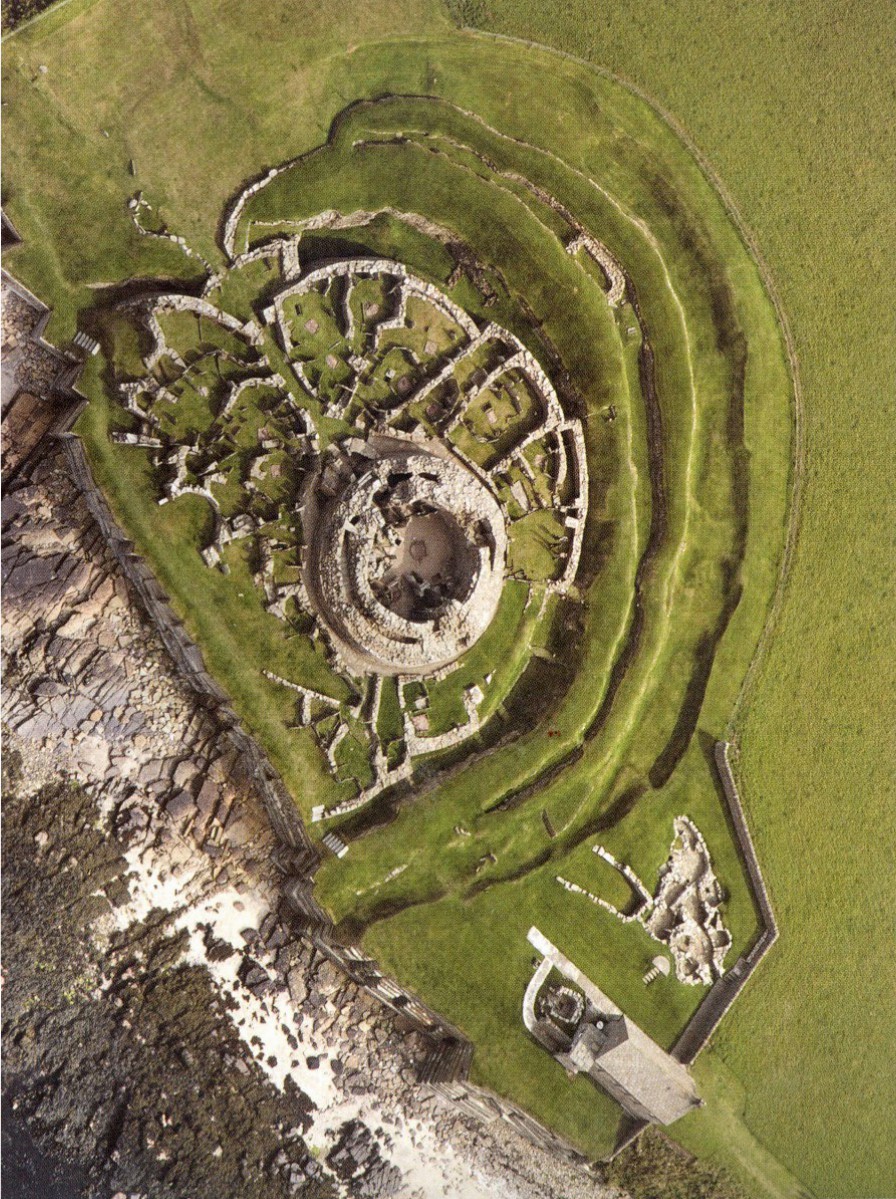 Aerial view of the Broch of Gurness, Orkney. You get some idea of what Sna Broch would have looked like. It’s unlikely the banks would ever have completely encircled the living area. The sea formed part of the defenses.

However, in the sea-sliced section through its monumental defensive banks soils that pre-date the construction of the broch have been buried and preserved. 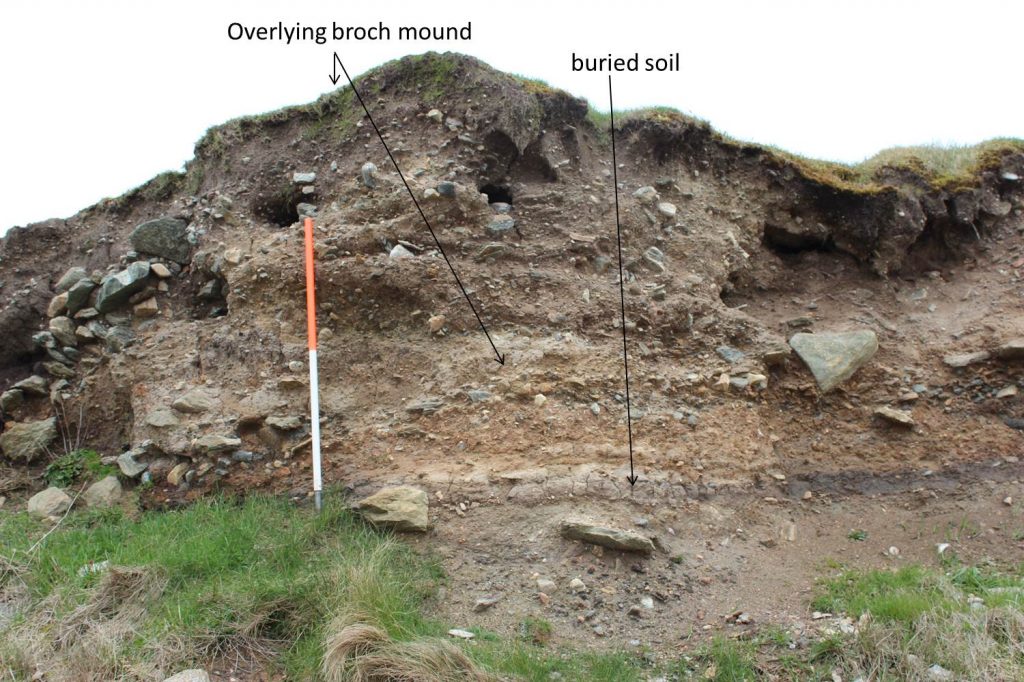 The light browny-grey layer is the ground surface that was there before the broch was built.

In waterlogged deposits at the bottom of the defensive ditches, preserved plant material can be seen with the naked eye. 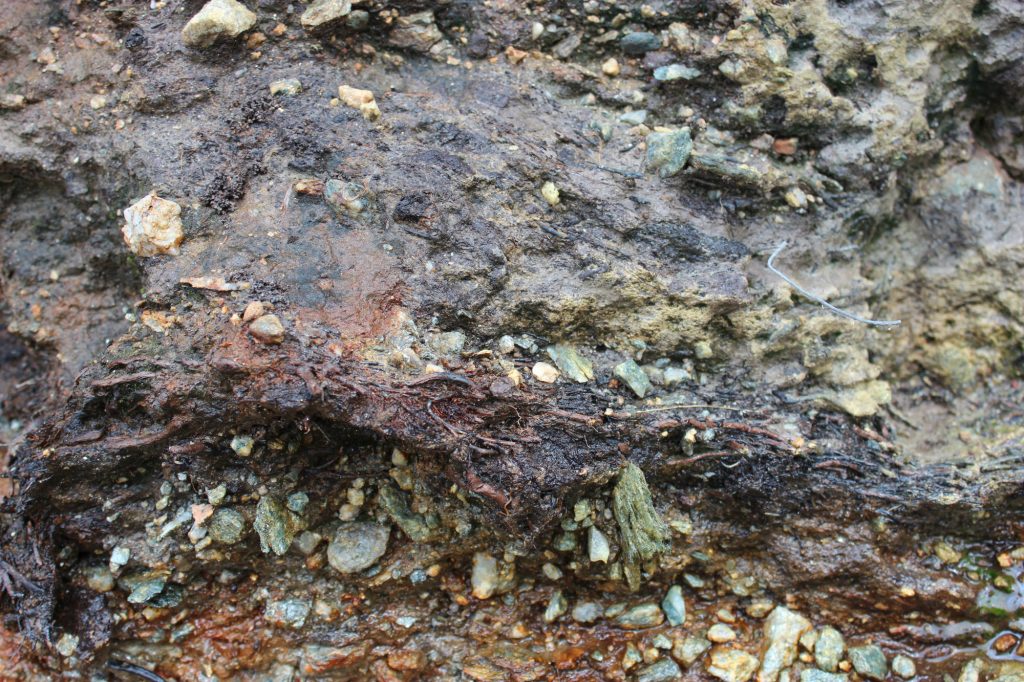 Preserved vegetation (looks like heather) in the base of the ditch.

Deposits like these have the potential to contain very detailed information about the landscape and environment from when before the broch was built into its early use.

Look at Ellie and Frances to get an idea of the scale of these earthworks at Sna Broch!

Later on in the summer, we hope to clean, record and sample the half-sectioned broch at Channerwick. In this extraordinary site, because the sea has exposed the broch and all its contents, we can quickly gain a good understanding of the relationships of the structures, and can access deposits from the very beginning of the site’s history to the very end. 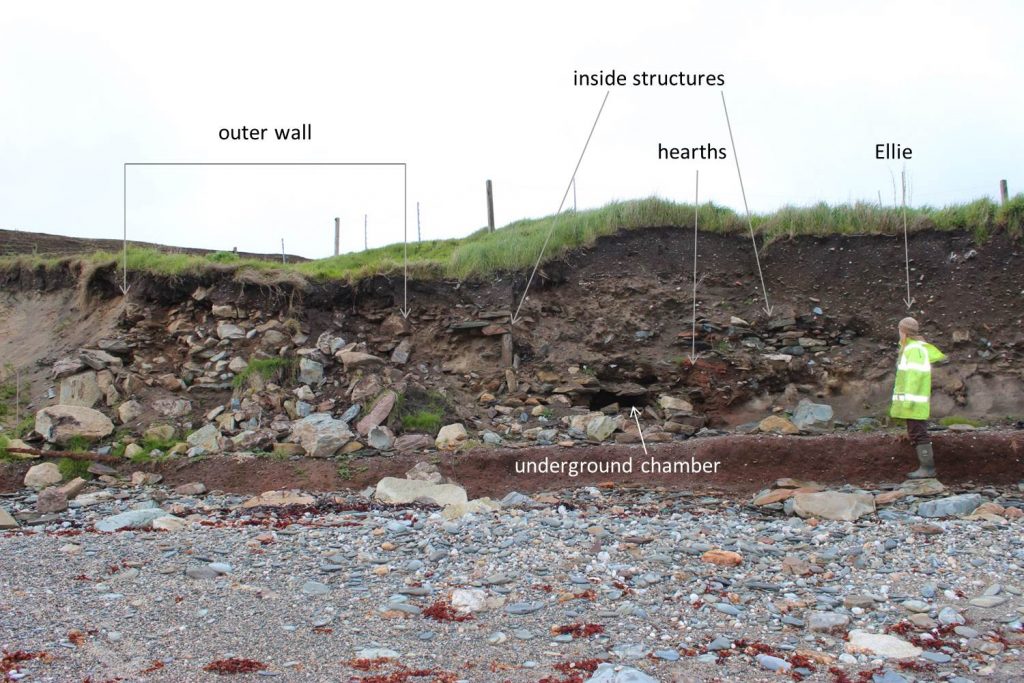 A possible broch at Channerwick, mainland Shetland. The outer wall is over 4m thick. You can see internal walls, bright orange peat ash of fireplaces – and an underground chamber.

Another good example of how coastal erosion can present opportunities for new discoveries and knowledge.