A blog post from Uist – the view from SCHARP volunteers.

The visits to Uist by team members from the SCHARP and ACCORD project to carry out training in their respective surveying techniques a few weeks apart in the early autumn of 2014 proved a useful juxtaposition of events for Access Archaeology members Simon Davies, Roger Auger and David Newman. The retired maths teacher, dentist and architect team up to undertake field survey work in the remoter parts of the southern Hebridean islands where official recording has been minimal and many archaeological sites remain undiscovered.

In August the ACCORD project team headed by Dr Mhairi Maxwell from Glasgow School of Art carried out training in 3D imaging of archaeological remains using both photogrammetry and RTI techniques. During their stay students were helped to record a wheelhouse, an early Christian chapel and a cross marked slab and were impressed with the techniques which allow 3D graphic models to be made using simple photographic equipment and clever computer software. 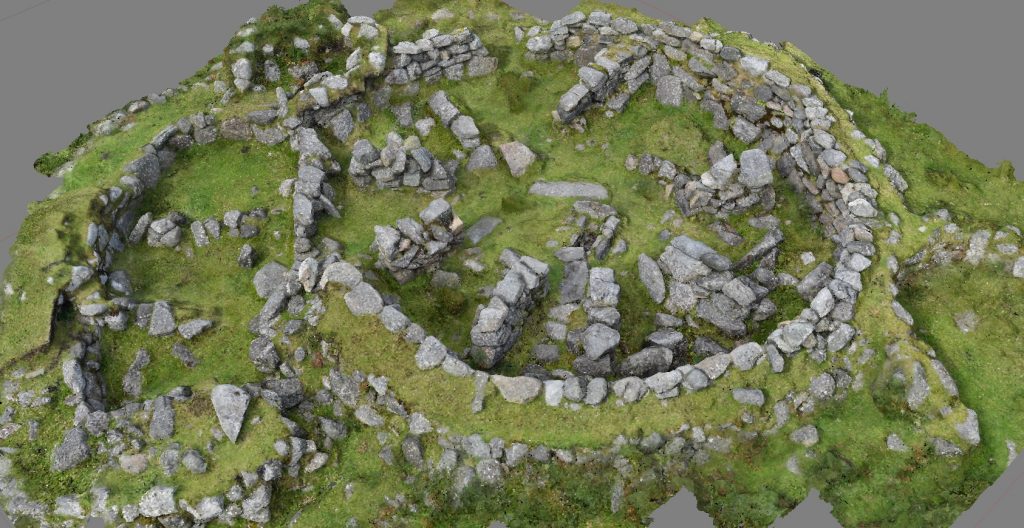 A month later Elinor Graham and colleagues from the SCHARP project visited Uist to talk about the coastal zone assessment project which was originally undertaken on the islands following the hurricane in January 2005 when many existing coastal sites were damaged and new ones exposed. Students were taught how to use the SCHARP smart-phone app to access the existing records and also carry out a 10 year update on the red listed CZA sites of which there are over 30 on Uist.

Survey team member David Newman explained “With the two sets of training so close together I guess it was natural that we would start thinking about the possibilities of combining the techniques we learned – to the advantage of both”.

The first follow up project undertaken involved creating a 3D model of a SCHARP red listed Neolithic chambered cairn on the north shore of South Uist (SCHARP site ID 8903) that is regularly inundated at highest spring tides. This was done using a kite mounted camera and PhotoScan software which allowed both accurate aerial photo plan and angled images to be produced. Although the survey team felt the site was probably less at risk than believed in 2005, the new record will facilitate much more accurate monitoring of any changes to the cairn in future years. 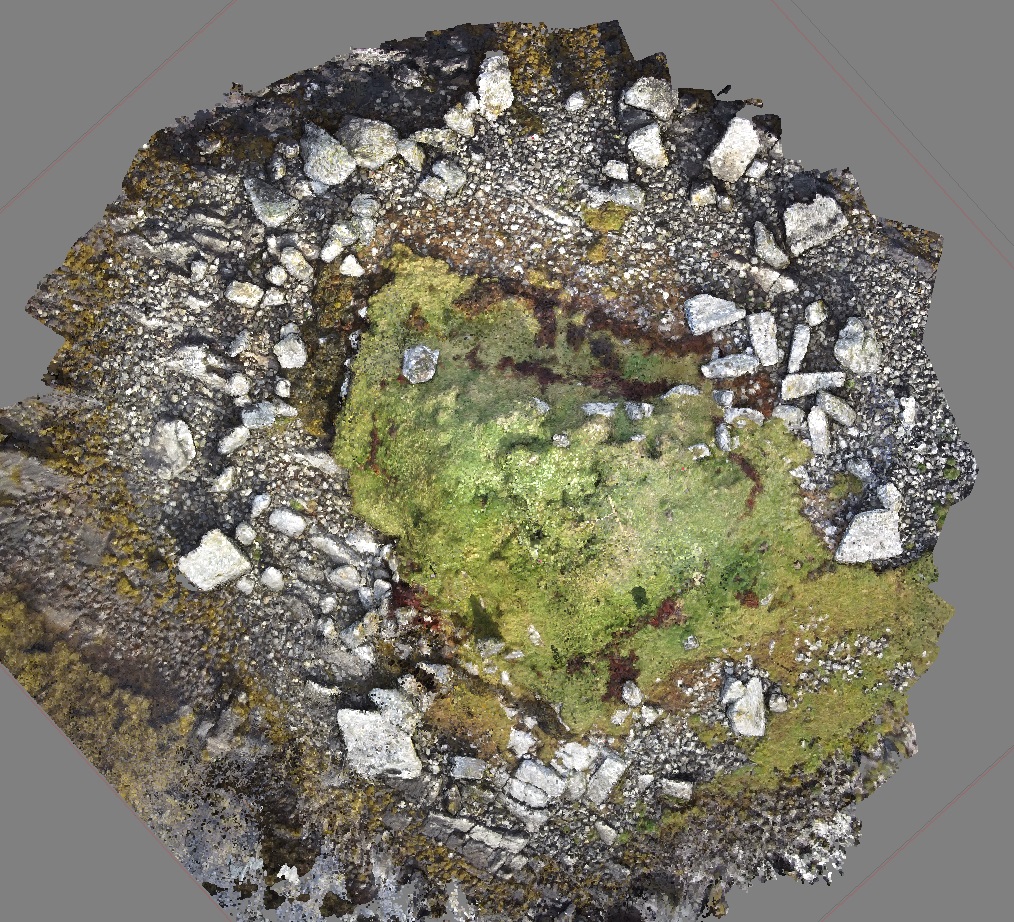 PhotoScan 3D model of the remains of a chambered cairn on South Uist. Scale is recorded by two 1m long poles which can just be seen lying on the green mound.

The survey team were also regularly monitoring two further red listed sites on the west coast of Baleshare on North Uist which had seen erosion of several metres in the past decade and where at least one, possibly two Iron Age wheelhouses are eroding out of adjoining dune faces (9609 and 9612). It was during one of these visits after a November storm that Roger Auger spotted a new silt layer exposed in the inter-tidal zone a few metres away, and a minor discontinuity which caught his eye turned out to be the remains of a buried basket containing animal bones and quartz flakes. The day after the discovery, the team returned with local archaeologist Dr Kate MacDonald and carried out assessment and preliminary survey work which included 3D imaging of the basket and the surrounding silt layer, and posting a new SCHARP record (12856). Although this site was originally red listed it was soon able to be changed to green when a team of specialists came a few days later and removed the remains for detailed analysis and conservation.

Roger Auger said “The find was made completely by chance with the time of my walk coinciding with the post-storm beach degradation and the right tidal conditions. The great advantage of the photogrammetry recording technique was that we were able to take a very good in situ record of both the basket and the surrounding site before the sand was washed back in again which happened two days later. We were also working well below the high water mark so we only had a few hours to complete the work and speed was of the essence too.”

Orthographic aerial plan view from PhotoScan 3D model of Baleshare basket site. In this image the basket is still in situ within the red circle. 1m long poles show scale; the blue survey lines help pair and merge images in situations where there is low physical definition.

The survey team is also working on a field survey of the Eaval peninsula, one of the remotest peninsulas on the east side of North Uist, in consultation with Western Isles Council Archaeologist Deborah Anderson. Working in this area requires boat transport to avoid the 10km round trip walk there from the nearest road. As a result this area of Uist was not visited in the original 2005 CZA survey, so as well as reporting on coastal sites to SCHARP (12858) the team are exploring the hinterland too, which has already proved to be a rich source of new discoveries. The most important to date is a group of stone cellular structures, pits and underground passages on top of a steep sided rocky knoll, which until its discovery last November, was not even known to the local crofter who had grazed sheep there for several decades. 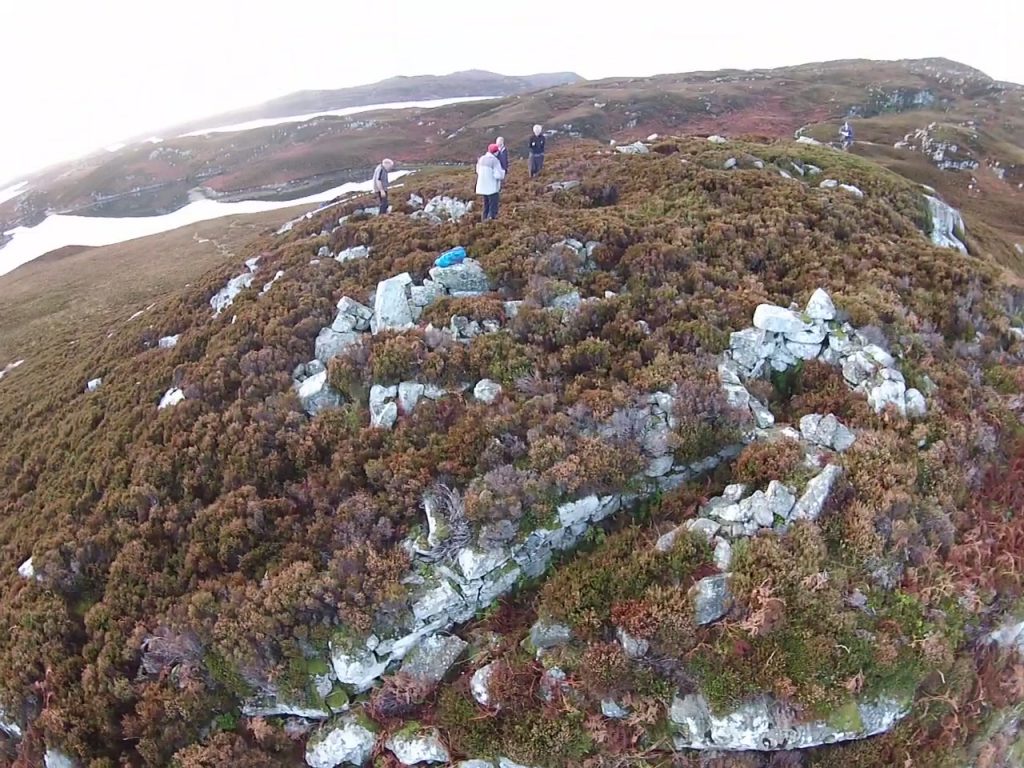 Surveying the hilltop site at Bagh Moraig. In the foreground is one of the cellular structures with its 8m long entrance passage which was originally covered with stone slabs.

Team member Simon Davies used his drone mounted camera to take aerial pictures of the extensive remains which are difficult to see on the ground because of a thick covering of heather. From these and other images it was possible to create a complete 3D model of the whole site (which extends to around 0.5Ha) which allowed preliminary scale plans to be produced for submission to the local monuments record and Discovery and Excavation in Scotland. 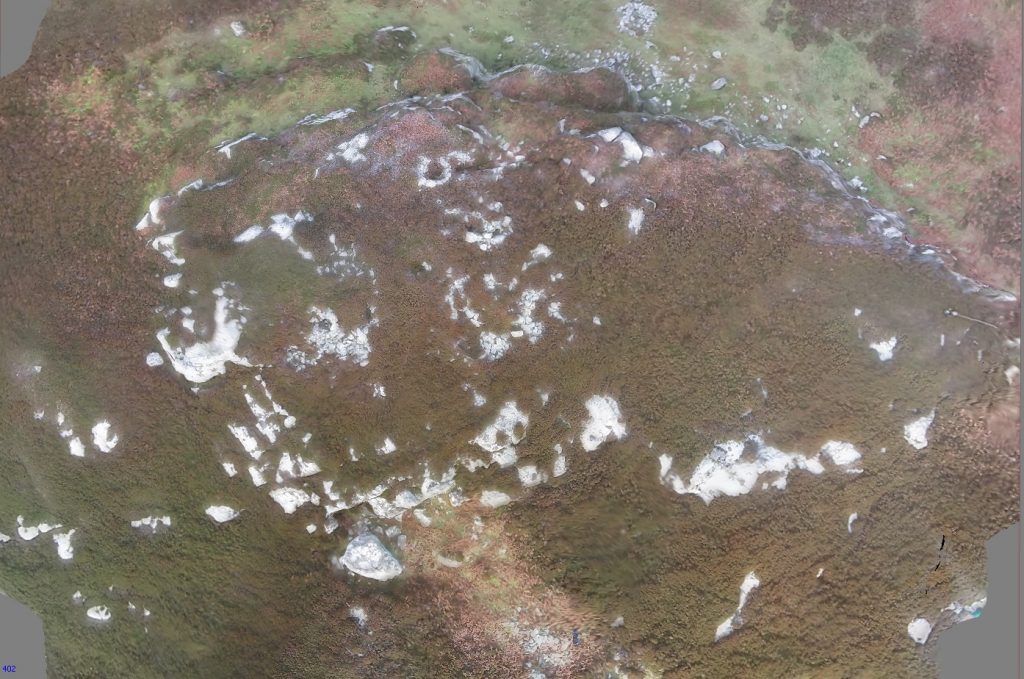 Orthographic aerial plan view of the Bagh Moraig site. Scale is shown by the 5m long camera pole lying on the ground to the right of the image.

When the Eaval survey is completed at the end of 2015 the three surveyors hope to gain funding to develop a smart phone app similar to that used by the SCHARP project to enable anyone interested to both easily locate the sites and gain access to information about them in situ, in an area where mobile phone coverage is notoriously poor.

The combined SCHARP and ACCORD training sessions on Uist have not only improved the ability of community members to monitor the condition of existing archaeological sites, but also deliver with easily available tools a good standard of recording in locations that are often difficult or remote to access.